Read Dragons at the Party Online

Dragons at the Party 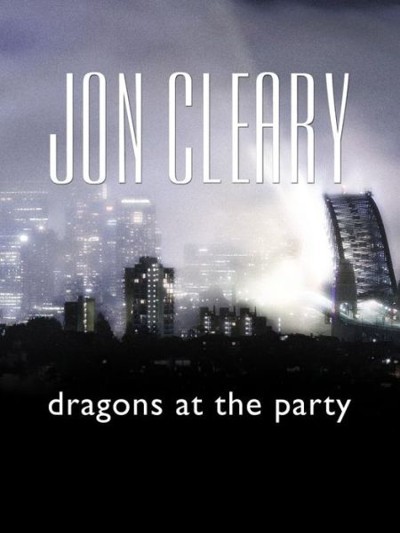 DRAGONS
AT THE PARTY

No part of this book may be reproduced in any form without permission in writing from the publisher.

DRAGONS
AT THE PARTY

WHEN THEY
took the bag of emeralds from the pocket of the murdered man, the President sighed loudly and the First Lady, who had been taking French lessons with her sights on asylum on the Riviera, said, “
Merde!
”

All this Malone learned within five minutes of arriving at Kirribilli House. Sergeant Kenthurst, the leader of the detail of Federal Police who were guarding President and Madame Timori, might know next to nothing about homicide but, coming from Canberra, had a sharp ear for detail and expletives.

“It struck me as a bit off-colour,” he said.

“It would have been a bit more off-colour,” said Russ Clements, who had taken high school French, “if she’d said it in Aussie.”

“Righto, Russ, spread yourself around, see what you can pick up.” Malone and Clements had started together as police cadets and Malone sometimes wondered if Clements, with his basic approach to everything, didn’t have the right attitude. There had been a time long ago when his own approach had been irreverent and somehow police work had been, or had seemed to be, more fun. “Are those protestors still outside?”

“They’ve been moved further back up the street. I’ll see what I can get out of them. It may have been one of them who did it.” But Clements sounded doubtful. Demonstrators didn’t bring guns to their outings. You didn’t volunteer to be manhandled by the pigs with a weapon in your pocket.

As the big untidy Homicide detective lumbered away, nodding to two junior officers to go with him, Kenthurst said, “Is he a good man?”

Malone sighed inwardly:
here we go again
. He was a patient-looking man, always seemingly
composed.
He was tall, six feet one (he was of an age that still continued to think in the old measures), big in the shoulders and still slim at the waist; he had that air of repose that some tall men have, as if their height accents their stillness. He was good-looking without being handsome, though the bones in his face hinted that he might be thought handsome in his old age, if he reached it. He had dark-blue eyes that were good-tempered more often than otherwise and he had a reputation amongst junior officers for being sympathetic. He suffered fools, because there were so many of them, but not gladly.

“Don’t they teach you fellers down in Canberra to be diplomatic?”

The Federal Police Force, headquartered in the Australian Capital Territory, was a comparatively recent invention. Being so new, it had had no time to become corrupt; based in Canberra, it had also been infected by the virus of natural superiority which, along with hay fever and blowflies, was endemic to the national capital. The police forces of the six States and the Northern Territory, older, wiser and more shop-soiled in the more sordid crimes, looked on the Federals in much the same way as State politicians looked on their Federal counterparts, smart arses who didn’t know what went on in the gutters of the nation. The cops of Neapolis, bargaining with the pimps of Pompeii, had felt the same way about Rome and the Praetorian Guard.

Kenthurst blinked and his wide thin mouth tightened in his long-jawed face. He never liked these assignments here in New South Wales: the locals were too touchy. “Sorry, Inspector. I didn’t mean to criticize—”

“Sergeant, if we’re going to get on together, let’s forget any rivalry. I’m not trying to muscle in on your territory—looking after a couple like the Timoris would be the last thing I’d ask for. You called in the local boys from North Sydney and they called us in from Homicide. I don’t want to take your President away from you. This is the biggest weekend of the year, maybe in Australia’s history, and I was looking forward to spending it with my wife and kids. So let’s co-operate, okay?”

Kenthurst nodded and looked around to see if anyone had overheard the exchange. But Malone did not tick a man off in front of his own men. He had his own diplomacy, of a sort.

Malone looked down at the sheet-covered body. The police photographer had taken his shots
and
the body was ready for disposal; Malone could hear the siren of the approaching ambulance. “Masutir—what was his first name?”

“Mohammed. He was a Muslim, same as the President. He was a kind of second secretary, a pretty innocuous sort of guy as far as I can tell.”

“Poor bugger.” Malone looked around the grounds of the old house. All the lights were on, but there were big patches of black shadow under the trees. The grounds sloped down steeply to the waterfront and just below them a ferry, lights ablaze, drifted in towards the Kirribilli wharf. Once upon a time, before he and Lisa had started their family, they had lived just up the ridge from this house and he had caught that ferry to work. “Looks like the shot could have come from that block of flats.”

Kenthurst looked towards the block of flats just showing above the trees on the street side of the house. “It would have to’ve been from the top floor. I think the local boys are over there now.”

“What was Timori doing out here?”

“I gather he always liked to go for a walk after dinner—he wanted to go up the street, round the block, but we put the kybosh on that. He was famous for it back home in Palucca. No matter where he was, he always went for a walk after dinner. Just like President Truman used to, only
he
used to go for his walk before breakfast. Timori is a great admirer of Harry Truman, though I don’t know Truman would have liked that.”

It was Malone’s turn to blink, but he made no comment. Kenthurst might turn out to be a mine of inconsequential information; but Malone knew from experience how sometimes a nugget could be found amongst all the fools’ gold. “What happened when this feller went down? Did anyone hear the shot?”

“No. Those galahs outside were chanting their usual stuff.
Go home, Timori
, all that crap.”

“How has Timori been taking the demos?”

“He just smiles—I guess he’s used to it. I gather the Paluccans were a bloody sight more vocal and violent than our galahs. He’d given up taking his walks the last couple of months in Bunda.”

“What about Madame Timori—did she scream or faint or anything?”

“
Nothing. She just got angry, started swearing—she knows a lot of words besides
merde
. She’s a real tough cookie.”

Kenthurst was about the same age as Malone, forty-two, but Malone guessed they looked at different television programmes. Kenthurst, a smart dresser, looked as if he might be a fan of
Miami Vice
, where all the girls were tough cookies. But he had said “galahs,” so he wasn’t entirely Americanized. Malone was glad of that. He himself wasn’t anti-American, but he had grown tired of the standards for his own work being set by
Hill Street Blues
and
Miami Vice
. Police work, 99 per cent of the time, was plod, plod, plod and the music was slower than an undertaker’s jingle. The New South Wales Police Force had its critics, but it wasn’t the worst police force in the world, far from it.

“Why are the Timoris here at Kirribilli House?”

“It’s only temporary. The PM wanted them taken to Canberra, kept on the RAAF base there or even at Duntroon, so we could keep tight security on them. Madame Timori wouldn’t have a bar of that. Sydney or nothing, she told them. So they shoved them in here till they find a place for them. It’s been a bloody headache.” He gestured at the sheet-covered corpse. “Maybe they’ll be glad to move now.”

They walked up the gravelled path to the steeply-gabled stone house. It had been built just over a hundred years ago by a rich merchant with the commercial-sounding name of Feez and in time it had been acquired by the Federal Government as a residence for visiting VIPs. Then a certain Prime Minister, chafing that such a charming house in such a beautiful situation right on Sydney Harbour should be wasted on visitors, some of them unwelcome, had commandeered it as his official Sydney residence. The present Prime Minister, who hated The Lodge, the main official residence in Canberra, spent as much time here as he could, being a Sydney man. Malone wondered how Phil Norval, the PM, felt about these unwelcome guests.

The Timoris were in the drawing-room. They were a handsome couple in the way that the ultra-rich often are; money had bought the extras to the looks they had been born with. Only when one looked closer did one see that Abdul Timori’s looks had begun to crumble; his bloodshot eyes looked half-asleep
in
the dark hammocks beneath them and his jowls had loosened. Delvina Timori, however, looked better than when Malone had last seen her close-up, ten or twelve years ago; she had never been strictly beautiful, but she had a dancer’s arrogance and grace and there was a sexuality to her that fogged-up most men’s view of her. Only their womenfolk looked at her cold-eyed.

“Scobie Malone, isn’t it?” she said in the husky voice that sounded phoney to women and like a siren’s song to their tone-deaf escorts. “I remember you! Darling, this is Mr. Malone. He used to be in the Vice Squad when I was with the dance company. He thought all we dancers were part-time whores.” She gave Malone a bright smile that said,
You never proved it
. “I hope you’ve changed your mind about dancers, Mr. Malone. Especially since Australia is now so
cultured
.”

Life in the Fat Lane by Cherie Bennett
Mesmerized: The Magician's Plaything by Mallorie Griffin
Goldenboy by Michael Nava
She Was The Gateway Drug by Josh Rollins
Deadly Abandon by Kallie Lane
Man Tiger by Eka Kurniawan
Alarm Girl by Hannah Vincent
The Lady Who Lived Again by Thomasine Rappold
The Impossible Coin (The Downwinders Book 2) by Michael Richan
Best Kept Secret by Amy Hatvany