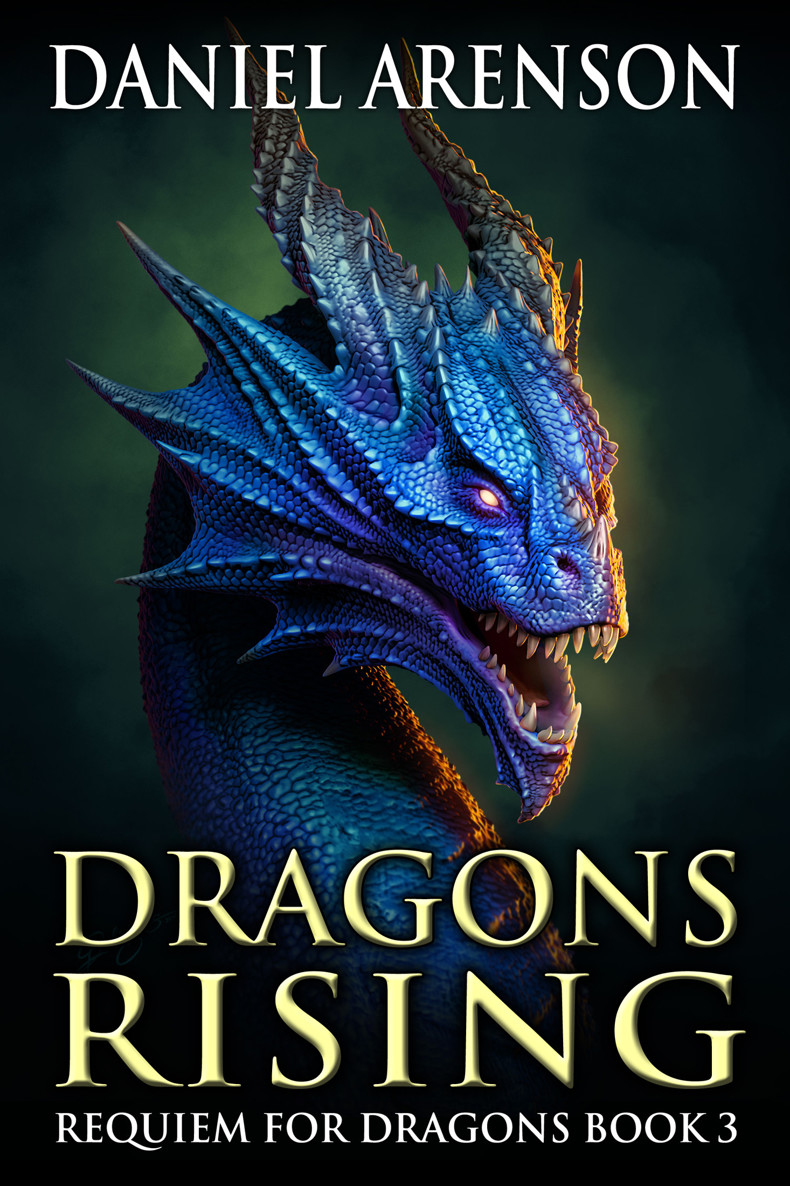 Dragons Rising
is the third volume of
Requiem for Dragons
, a fantasy series about an ancient kingdom whose people can turn into dragons.

If you haven't, you can find them at all the usual ebook stores.

With this introduction out of the way, I welcome you back into a world of blood, steel, and dragonfire.

He
washed onto the beach at dawn, coughing, shivering, cut and burnt and
barely alive. He lay on the sand and waited to die.

The
sun wheeled above, a wanderer of blazing heat and light, a ball of
dragonfire, mocking him, burning him, leaving him shuddering in
darkness.

The
stars winked at him. The moon glared down, bloated, obscene, a pale
glob of pus. The Draco constellation flew over him, its eye staring,
boring into him, digging through his soul and tugging out his
innermost secrets like a hook tugging out entrails.

Gemini
slept as the heavens wheeled.

The
sun burned his chest again, and the sand burned his back. He blinked.
Was he awake? His back--his back burned. The pain yanked him up from
death.

Yet
the sand dug into his back, into the cuts the whip had left, digging
through him. Insects were eating him, he thought. Beetles and crabs
were digging through his flesh, reaching for his bones, reaching for
his heart, ready to suck it dry. He gasped for breath.

Where
was he? What had happened? Gemini could only recall vague, fuzzy
images. Flotsam burning across a dark sea. The screams of creatures
above him. Men drowning--thousands of men, reaching for him, trying
to grab the slat of wood he clung to. And his own hands--beating them
back, gouging out their eyes, shoving them down to their watery
graves. And above--the dragons flying, the last dragons of Requiem,
and one among them gleaming with the colors of fire, a living spirit
of flame.

The
word cracked Gemini's lips. He tasted sweet, coppery blood and sucked
it greedily. He had not drunk anything else since before those hazy
memories of fire and water. Looming above the pain, above those
memories, rose Domi.

Domi--a
dragon with scales of red, orange, yellow, and all other colors of
flame.

Domi--the
firedrake he had ridden, the servant he had taken into the Temple,
the woman he loved, the only soul he had ever truly, fully loved.

"Where
are you, Domi?" he whispered.

She
needed him, he knew. He had vowed to protect her. He had vowed to
defend her from Mercy, from Beatrix, from all the evils of the world.
He could not die here alone, far from her.

The
memory of her green eyes gave him strength he had not thought in him.
He pushed himself onto his elbows, then rose to his feet.

He
wobbled, nearly falling back into the sand. He looked around him, and
his eyes dampened, and his belly knotted.

He
stood in a world of desolation.

Crimson
smoke still covered the sky, a stinking shroud. Jetsam and driftwood
covered the beach: emptied coffers, bits of shattered balustrades,
half a mast, the burnt shreds of a sail, and millions of other
charred, damp relics of the Horde's fleet. Among them lay the dead.
Waterlogged bodies of warriors, burnt children, a rotting griffin,
and thousands of dead fish washed ashore.

I
was one of these corpses,
Gemini realized, looking around him.
For a day and night, I was one of them.
He trembled.
I've
risen from the dead.

He
raised his head, stared up at the sky, and whispered through bleeding
lips, "Why did you choose me to live, Spirit?" Tears stung
his eyes. "Why do I stand here while countless lie dead around
me?" His hands balled up into fists, and his tears flowed down
to his lips, tasting of salt and sand and ash. His voice rose to a
hoarse cry. "What do you need me to do? Why am I still alive?"

He
fell to his knees, trembling. The wounds on his back screamed with
agony. His head swam. His tongue was so parched. He needed water. He
needed food. He needed to find Domi.

He
thought of her eyes and took a step.

His
knees wobbled. His chest ached. He gritted his teeth and took another
step.

He
walked over charred, wet wooden slats, perhaps once the hull of a
ship. Dead fish rotted before him; Gemini was not yet famished enough
to touch them. Past a shattered bulk of driftwood, perhaps a chunk of
a mast, he came across the corpse of a soldier.

It
was a woman, young by the looks of her, at least based on what
remained. Crabs were feasting on the flesh, tugging at her exposed
legs. One was clawing at an ear. Others were clattering over her
leather armor.

Disgust
rose in Gemini. He doubled over and gagged. He spat out nothing but
bile and spit.

"Go
away!" he cried out. He lifted a chunk of wood and swatted at
the crabs. "Leave her alone, for pity's sake!"

The
animals scattered, and Gemini knelt over the dead woman, for a moment
sure it was Domi, sure that it was his love, her face waterlogged and
chewed. But no. This woman had long, black hair, and she wore armor
of the Horde. Gemini's eyes strayed to her belt.

Two
precious, beautiful gifts hung there: a sword and a canteen.

Gemini
leaped forward and tugged at the canteen first. He cursed, at first
unable to remove it from the belt. His fingers shook madly. He was
too weak.
Come on . . . come on!
He could not tear it free,
and he finally gave up, lay down in the sand, and pressed his head
against the dead woman's hip. He opened his mouth and unscrewed the
canteen's lid above him.

A
few drops of precious water--beautiful, lovely, healing, life-giving
water--dripped out onto his parched tongue.

Gemini
jangled the canteen--it was still attached to the woman's
hip--spilling out a few more drops. They gave him the strength to
push himself back up and draw the woman's sword. It was a curved
saber, short and wide. Gemini kept walking, blade in hand.

He
stepped over more wreckage: slats of wood, shreds of canvas, a wooden
crow's nest fallen from its mast, and a section of elaborately carved
balustrade. Finally he found another corpse--this one a beefy,
bearded warrior, his face bloated and white--with another canteen.
Gemini worked his blade against the man's belt, tore the canteen
free, and opened it above his mouth.

More
lovely, beautiful water spilled out, filling Gemini's mouth, dripping
down his face, fresh, pure, heavenly. He emptied half the canteen and
then closed the lid, sealing in the rest.

He
had walked for a long time, passing the wreckage of many ships and
the corpses of many warriors, before he found the first other
survivor.

The
man crawled across the beach. He wore scraps of leather armor, and
his hair was dark and curled and caked with sand and blood. His left
leg was shattered, broken several times; Gemini nearly gagged to see
its odd angles. The poor wretch groaned as he crawled across the
sand, reaching shaky hands toward a leather pouch. Gemini squinted.

His
blade thumped into the sand. He was too weak to carry it.

Inside
the leather pouch Gemini saw the greatest treasure he'd ever laid
eyes on. He nearly fainted from desire, and his nostrils flared to
inhale the sweet scent.

Gemini
could already taste them. He shivered at the aroma. Lemons--sweet
nectar of life for sailors . . . and perhaps for survivors in the
ruin of the world.

At
the sound of Gemini's voice, the wounded man on the beach turned his
head around, saw Gemini, and hissed. At once the wretch spun back
toward the pouch and crawled with more fervor, dragging his shattered
leg across the sand.

The
wounded man crawled, broken leg trailing behind. Gemini limped
forward, fell into the sand once, pushed himself up and kept
lolloping onward, hands in the sand like some ape.

The
wounded man grabbed the pouch.

Gemini
roared, leaped forward, and clutched the pack too. Lemons rolled
across the sand.

"Mine!"
Gemini screamed. "I saw them first! My lemons!"

The
wounded sailor cried out hoarsely, face red. His lips bled. He clung
to the pack pathetically. One lemon inside was crushed, dripping
juice.

"You're
wasting them!" Gemini shouted. "Give me the pouch. Let go!"

Gemini
shouted and tugged the pack mightily, but the man refused to let go.
More lemons spilled. With one hand, the man reached out and grabbed
one of the rolling fruit.

Rage
flowed over him, and Gemini released the pack and grabbed the man's
throat.

The
man's scream died to a gurgle.

"You're
a thief!" Gemini growled. "A dirty thief after my lemons.
Mine. My lemons."

The
man gasped, pawing at Gemini's chest. Gemini squeezed harder. The
man's eyes bulged, and spittle rose on his lips.

He
squeezed harder, and his enemy's face turned blue. The sailor's hands
fell to the sand . . . and curled into fists.

One
fist drove upward and slammed into Gemini's jaw.

White
light exploded, and Gemini's grip loosened on the man's throat. He
fell back into the sand, blood on his lips. He saw stars.

The
wounded sailor rasped for air, shoved himself up, and grabbed the
pack of lemons again.

Gemini
struggled to his feet, still bleeding, and took two steps forward in
the sand. He slammed his foot down hard, driving his boot into the
man's broken leg.

Gemini
had never heard a scream of more agony. It was a horrible sound, a
shattering sound, a cry of pure pain fading to a whimper and silence.

The
sailor slumped into the sand, perhaps dead, perhaps unconscious.
Gemini would take no chances. He stepped off the shattered leg,
grabbed the man's throat, and squeezed again, squeezed and squeezed
with all his anger--for Domi, for his ruined fleet, for his ruined
life--squeezed until the man breathed no more, until the precious
lemons were his, his alone, his prize.

Gemini
sat in the sand and he feasted upon them. Their juice blazed against
his cut lips but he only laughed at the pain. Pain was good. Pain
meant he was alive.

His
mouth stinging, the lemon juice mingling with his blood, Gemini rose
to his feet. He hefted the pack with the remaining lemons across his
back. He walked on along the beach, leaving the dead man behind.