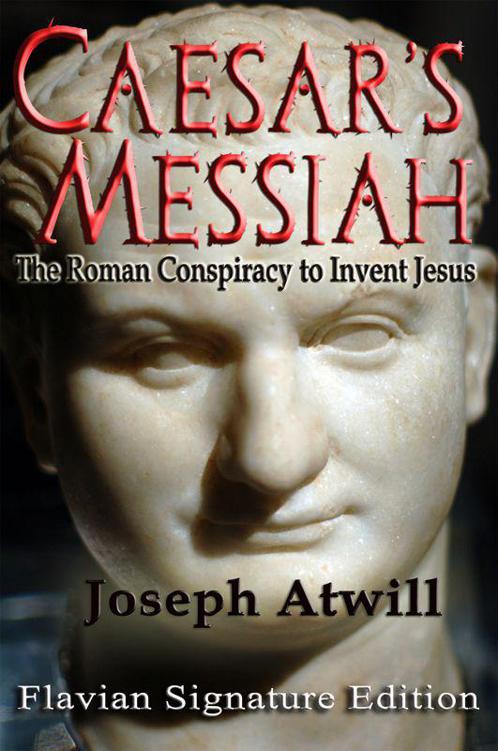 The Roman Conspiracy to Invent Jesus

Copyright © 2011 Joseph Atwill.  All rights reserved under International and Pan American Copyright Conventions, including the right to reproduce this book or portions thereof in any form whatsoever, except for use by a reviewer in connection with a review.

“Challenging and provocative.
If what Joseph Atwill is saying is only partially true,
we are looking into the abyss.”

“Atwill tells a story never before attempted,
sounds a trumpet never previously heard,
and explores a world of potential truth until now
thoroughly obscured from our view.”

For Aemilia and Kit

CHAPTER 1  The First Christians and the Flavians

CHAPTER 2  Fishers of Men:  Men Who Were Caught Like Fish

CHAPTER 3  The Myth for the World

CHAPTER 4  The Demons of Gadara

CHAPTER 7  The Puzzle of the Empty Tomb

CHAPTER 8  The New Root and Branch

CHAPTER 9  Until All Is Fulfilled

CHAPTER 10  The Authors of the New Testament

CHAPTER 11  The Puzzle of Decius Mundus

CHAPTER 12  The Father and the Son of God

CHAPTER 13  Josephus’ Use of the Book of Daniel

CHAPTER 15  The Apostles and the Maccabees

CHAPTER 16  The Samaritan Woman and Other Parallels

A Timeline of Jesus’ and Titus’ Lives

In the popular mind, and in the minds of most scholars, the origin of Christianity is clear: The religion began as a movement of the lower-class followers of a radical Jewish teacher during the first century C.E.  For a number of reasons, however, I did not share this certainty. There were many gods worshiped during Jesus’ era that are now seen as fictitious, and no archeological evidence of his existence has ever been found. What contributed most to my skepticism was that at the exact time when the followers of Jesus were purportedly organizing themselves into a religion that urged its members to “turn the other cheek” and to “give to Caesar what is Caesar’s,” another Judean sect was waging a religious war against the Romans. This sect, the Sicarii, also believed in the coming of a Messiah, but not one who advocated peace. They sought a Messiah who would lead them militarily. It seemed implausible that two diametrically opposite forms of messianic Judaism would have emerged from Judea at the same time.

This is why the Dead Sea Scrolls were of such interest to me, and I began what turned into a decade-long study of them. Like so many others, I was hoping to learn something of Christianity’s origins in the 2,000-year-old documents found at Qumran.

I also began studying the other two major works from this era, the New Testament and
Wars of the Jews
by Flavius Josephus, an adopted member of the imperial family; I hoped to determine how the Scrolls related to them. While reading these two works side by side, I noticed a connection between them. Certain events from the ministry of Jesus seem to closely parallel episodes from the military campaign of the Roman emperor Titus Flavius as he attempted to gain control of the rebellious Jews in Judea. My efforts to understand this relationship led me to uncover the amazing secret that is the subject of this book: This imperial family, the Flavians, created Christianity, and, even more incredibly, they incorporated a skillful satire of the Jews in the Gospels and
Wars of the Jews
to inform posterity of this fact.

The Flavian dynasty lasted from 69 to 96 C.E., the period when most scholars believe the Gospels were written. It consisted of three Caesars: Vespasian and his two sons, Titus and Domitian. Flavius Josephus, the adopted member of the family who wrote
Wars of the Jews
, was their official historian. The satire they created is difficult to see. If it were otherwise, it would not have remained unnoticed for two millennia. However, as readers may judge for themselves, the path that the Flavians left for us is a clear one. All that is really needed to walk down it is an open mind. But why then has the satirical relationship between Jesus and Titus not been noticed before? This question is especially apt in light of the fact that the works that reveal their satire—the New Testament and the histories of Josephus—are perhaps the most scrutinized books in literature.

One part of the explanation is clear. Viewing the Gospels as satire—that is, as a literary composition (as opposed to a history) in which human folly is held up to ridicule—required a reader to contradict a deeply ingrained belief. Once Jesus was universally established as a world-historical individual, any other possibility became, evidentially, invisible. The more we believed in Jesus as a world-historical figure, the less we were able to understand him in any other way.

Moreover, the satirical level of the Gospels has not been discovered because it was designed to be difficult to see. The Flavian Caesars wanted more than just to transform messianic Judaism. They wanted Christianity to flourish and become widely held, even world- wide, before the Gospels’ satirical level was discovered. Why did they wish this? Because they wanted legacy, and they needed to fool the world to prove to posterity how clever they were. Though on their surface the Gospels appear to be religious literature, which many believe were written by the Jewish followers of a messianic leader, they actually stem from the overwrought vanity of Roman Caesars, desiring the populace to worship them as gods.

The process that ultimately led to the Flavians’ control over Judea was part of a broader and longer struggle, that between Judaism and Hellenism. Judaism, which was based upon monotheism and faith, was simply incompatible with Hellenism, the Greek culture that promoted polytheism and rationalism.

Hellenism spread into Judea after Alexander the Great conquered the area, in 333 B.C.E. Alexander and his successors established cities throughout their empire to act as centers of commerce and administration. They set up more than 30 Greek cities within Judea itself. The people of Judea, in spite of their historical resistance to outside influences, began to incorporate certain traits of the Greek ruling class into their culture. Many Semites found it desirable, if not necessary, to speak Greek. Wealthy Jews sought a Greek education for their young men.
Gymnasia
introduced Jewish students to Greek myths, sports, music, and arts.

Antiochus was openly contemptuous of Judaism and wanted to modernize Jewish religion and culture. He installed high priests who were supportive of his policies. When a rebellion against Hellenization broke out, in 168 B.C.E., Antiochus ordered his army to attack Jerusalem. Second Maccabees records the number of Jews slain in the battle as 40,000, with another 40,000 taken captive and enslaved.

Antiochus emptied the temple of its treasury, violated the holy of holies, and intensified his policy of Hellenization. He ordered the observances of the Hebrew cult be replaced with Hellenistic worship. He banned circumcision and sacrifice, instituted a monthly observance of his birthday, and placed a statue of Zeus on the Temple Mount.

In 167 B.C.E., the Maccabees, a family of religiously zealous Jews, led a revolution against Antiochus’ imposition of Hellenistic customs and religions. They sought to restore to power the religion that they believed was mandated by God in his holy land. The Maccabees compelled the inhabitants of the cities they conquered to convert to Judaism. Males either permitted themselves to be circumcised or were slain. After a 20-year struggle, the Maccabees eventually prevailed against the Seleucids. To quote 1 Maccabees: “the yoke of the Gentiles was removed from Israel” (13:41).

Though the Maccabees went on to rule Israel for more than 100 years, their kingdom was never secure. The Seleucid threat to the region was replaced by an even greater one from Rome. Roman expansionism and Hellenistic culture constantly threatened to engulf the religious state that the Maccabees had established. In 65 B.C.E., a civil war broke out between two Maccabean rivals for the throne. It was at this time that Antipater the Edomite, the wily father of Herod, appeared on the scene. Antipater helped bring about a Roman intervention in the civil war, and when Pompey sent his legate Scaurus into Judea with a Roman army, it marked the beginning of the end of the Maccabean religious state.

For the next 30 years (65–37 B.C.E.), Judea suffered through one war after another. In 40 B.C.E., the last Maccabean ruler, Matthias Antigonus, seized control of the country. By this time, however, the Herodian family was firmly established as Rome’s surrogate in the region and, with Roman support, defeated Matthias’ army and gained control of Judea.

After the destruction of the Maccabean state, the Sicarii, a new movement against Roman and Herodian control, emerged. This was a movement of lower-class Jews, originally called Zealots, who continued the Maccabees’ religious struggle against the control of Judea by outsiders, and sought to restore “Eretz Israel.”

The efforts of the Sicarii reached a climax in 66 C.E. when they succeeded in driving the Roman forces from the country. The Emperor Nero ordered Flavius Vespasian to enter Judea with a large army and end the revolt. The violent struggle that ensued left the country devastated, and concluded when Rome captured the Judean fortress Masada in 73 C.E.