Drake Chronicles: 03 Out for Blood 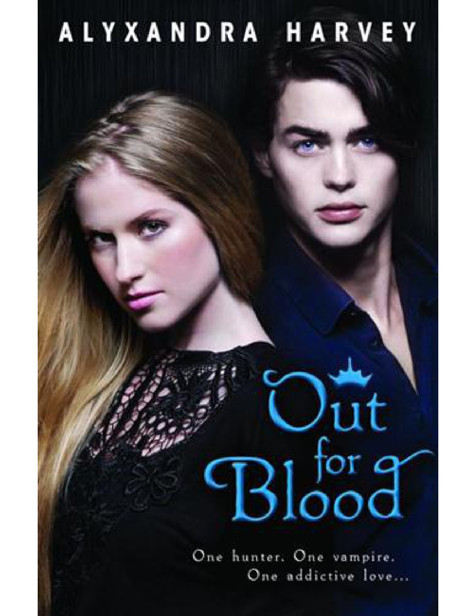 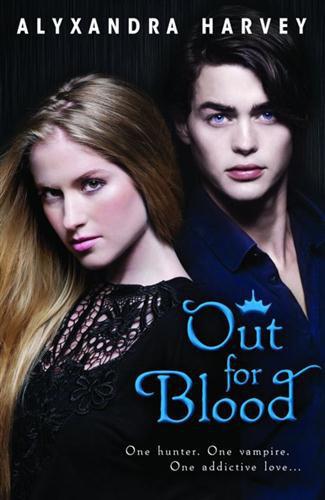 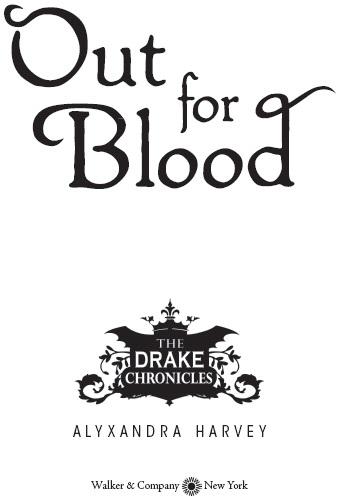 For Anne, from my inner ferret to yours! 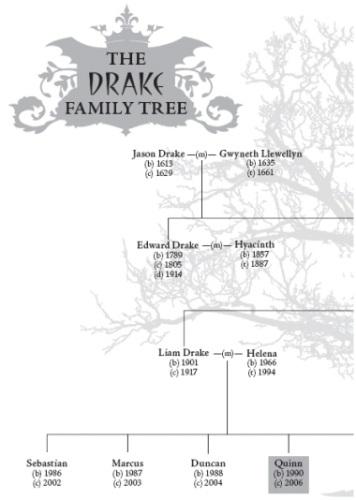 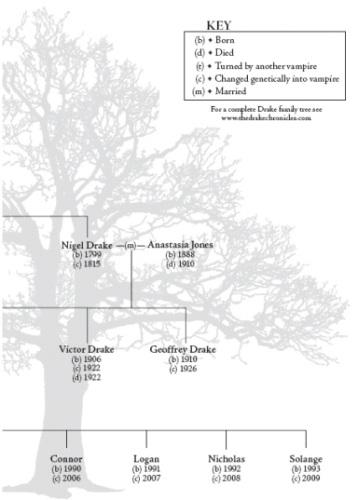 Shakespeare said, “What’s in a name?”

For instance, you can tel by my name that our family takes our status as vampire hunters very seriously. Good thing I’m an only child—if I’d had brothers or sisters, they might have been named Slayer or Kil er. We’d sound like a heavy metal band.

Hard to believe, in reality, we’re one of the oldest and most esteemed families in the Helios-Ra. When you’re born into the Wild family, no one asks you what you want to be when you grow up. The answer is obvious: a vampire hunter.

No ifs, ands, or buts. No deviations of any kind.

“I hate these stupid cargo pants,” my roommate Chloe muttered, as she did at the start of every single school year. Classes didn’t start for another week, but most of us moved into the dorm early so we could spend that extra time working out and getting ready. Chloe and I have been friends since our first day at the academy, when we were both terrified. Now we’re eighteen, about to start our last year, and, frankly, just as terrified. But at least we final y get to be roommates. You only get to make rooming requests in twelfth grade, otherwise they throw you in with people as badly matched as they can find, just to see how you deal with the stress.

Have I mentioned I’m real y glad this is our last year?

Even if the room wil probably smel like nail polish and vanil a perfume al year.

Chloe already had her bare feet propped up on her desk, applying a second coat of silver glitter over the purple polish on her toenails. She was, most emphatical y, not wearing her regulation cargos.

I was, but only because my grandfather dropped me off this morning, and he’s nothing if not old-school. He’s stil muttering about our friend Spencer, who has long blond dreads and wears hemp necklaces with turquoise beads. Grandpa can’t fathom how Spencer’s al owed to get away with it, why there’s a newfangled (his word) paranormal division, or why a boy wouldn’t want a buzz cut. Truth is, Spencer is such a genius when it comes to occult history, the teachers are perfectly wil ing to turn a blind eye. Besides, cargos are technical y regulation wear only for dril s and training and actual fieldwork. And Grandpa stil doesn’t understand why I won’t cut off my hair like any warrior worth her salt.

I had to pass several combat scenarios without anyone being able to grab it as a handhold to use against me. Nothing else would extract a promise from Grandpa not to shave my head in my sleep. I think he forgets that I’m not G.I. Joe.

Or that I like looking like a normal girl sometimes, with long blond hair and lip gloss, and not just a hunter who kil s vampires every night. Under my steel-toe combat boots my nails are pink. But I’d never tel him that. It would give him a heart attack.

He’d stil be out there on patrols if the Helios-Ra doctors hadn’t banned him from active duty last year because of the arthritis in his neck and shoulder. He might be built like a bul but he just doesn’t have the same flexibility and strength that he used to. He is, however, perfectly capable of being a guest expert at some of the academy fight-training classes. He just loves beating down sixteen-year-old boys who think they’re faster and better than he is. Nothing makes him happier, not even my very-nearly straight As last year. The first time Spencer met him, he told me Grandpa was Wild-West-gunslinger scary. It’s a pretty good description actual y—

he even has the squint lines from shooting long-range UV guns and crossbows.

And the recent treaty negotiations with certain ancient vampire families are giving him palpitations. In his day, blah blah blah. He stil doesn’t know Kieran took me into the royal caves last week to meet with the new ruling vampire family, the Drakes.

And I’m so total y not tel ing him until I have to.

I like archery and martial arts, don’t get me wrong, and I definitely feel good about fighting the Hel-Blar. They are the worst of the worst kind of vampire: mindless, feral, and always looking for blood. The more violently procured the better. They’re faintly blue, which is creepier than it sounds, and they smel like rotting mushrooms.

Needless to say, mushrooms don’t get served a lot in the caf.

But I like al the history stuff too, and the research and working with vampire families. I don’t think it should be a kil -them-al -and-let-God-sort-it-out situation. I love Grandpa—he took care of me when my parents both died during a botched takedown of a
Hel-Blar
nest—but sometimes he sounds like a bigot. It can be a little embarrassing. Vampires are vampires are vampires to him. If he found out Kieran was dating the sixteen-year-old Drake vampire daughter, he’d freak right out. He thinks of Kieran as an honorary grandson and would total y marry us off to each other if we showed the slightest inclination. Hel , he tries to pair us up anyway, and he’s about as subtle as a brick. Kieran’s like a brother to me though, and I know he feels the same way about me. I might be wil ing to sacrifice a lot for the Helios-Ra, but who I date is not one of those things.

Unfortunately Grandpa’s not exactly known for giving up. The thing is, neither am I. The infamous goat-stubborn streak runs strong in every Wild, and I’m no exception.

“Would you please change into something decent? Just looking at those cargos is giving me hives.” Chloe grimaced at me before going back to blowing on her wet nail polish. She was wearing a short sundress with lace-up sandals and earrings that swung down practical y to her shoulders. Her dark hair was a wild mass of curls as usual, her brown eyes careful y lined with purple to match her clothes.

She’d already unpacked every stitch of her wardrobe and hung it al neatly in our miniscule closet. It was the only spot of neatness I’d see al year. I’d bug her about her stuff everywhere, and she’d make fun of me for making my bed every morning.

I couldn’t wait. I’d missed her over the summer. E-mails and texting just aren’t the same, no matter what she says.

“I don’t mind the cargos,” I told her, shrugging.

“Please, I’ve seen what few clothes you have and they’re al pretty and lacy.”

“Not a lot of cal for lace camisoles in survivalist training and dril s,” I pointed out.

“Wel , since I don’t intend to set foot in that smel y old gym until I absolutely have to, I demand you wear something pretty.” She grinned at me. “I took you to dinner, didn’t I?”

“We went to the caf for mac and cheese,” I shot back, also grinning. “And you’re not my type.”

“Please, you should be so lucky.”

A knock at the door interrupted us. Spencer poked his head in. His dreads were even longer and more blond, nearly white. He’d spent most of the summer at the beach, as usual. “I am so stoked to final y be on the ground floor,” he said by way of a greeting. “I’m never climbing those stairs again.”

“Tel me about it,” Chloe agreed.

The dorm was an old Victorian five-story mansion. Ninth graders lived in the converted attic and had to climb the narrow, steep servant stairs several times a day. Every year we were promoted, we descended a floor. Our window now overlooked the pond behind the house and the single cranky swan that lived there.

“That bird’s looking at me again,” I said. He’d nearly taken a finger my very first day at the academy when I tried to feed him the bagel I’d saved from lunch.

Spencer sat on the edge of my bed, rol ing his eyes. “It’s dark out, genius.”

“I guess. You don’t know how shifty those swans are.” I wrinkled my nose and sat on the end of my bed, resting against the pil ow. “But speaking of vampires—”

“Aren’t we always?” Chloe said. “Just once I’d like to talk about boys and fashion and Hugh Jackman’s abs.”

“Hel o? Like you ever talk about anything else?” Spencer groaned. “I need more guy friends.”

I nudged him with my boot. “Guys would never have been able to put in a good word for you with Francesca last year,” I told him.

“Yeah, but she broke my heart.”

“Because there’s only room in my heart for you two lunatics.” I threw a pil ow at his head.

“What she said,” Chloe agreed, since she couldn’t reach her own pil ow.

“And anyway, if you were hanging out burping and scratching with other guys you wouldn’t hear about my visit to the vampire royal caves last week.”

“We don’t burp and scratch,” he turned to eye me baleful y. “And
what?
” Even Chloe put down her nail polish. “Seriously?”

“Kieran took me,” I said, a little smugly. It was rare that I was the one with the story to tel . Usual y I was too busy trying to get Chloe and Spencer out of trouble to get into any of my own.

“Dude,” Spencer whistled appreciatively. “How did you get that past your grandfather?”