Read Drawing Down the Moon Online

Drawing Down the Moon 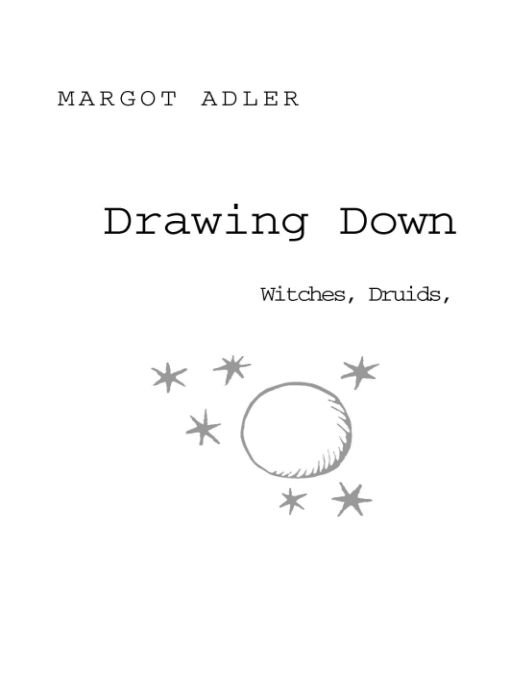 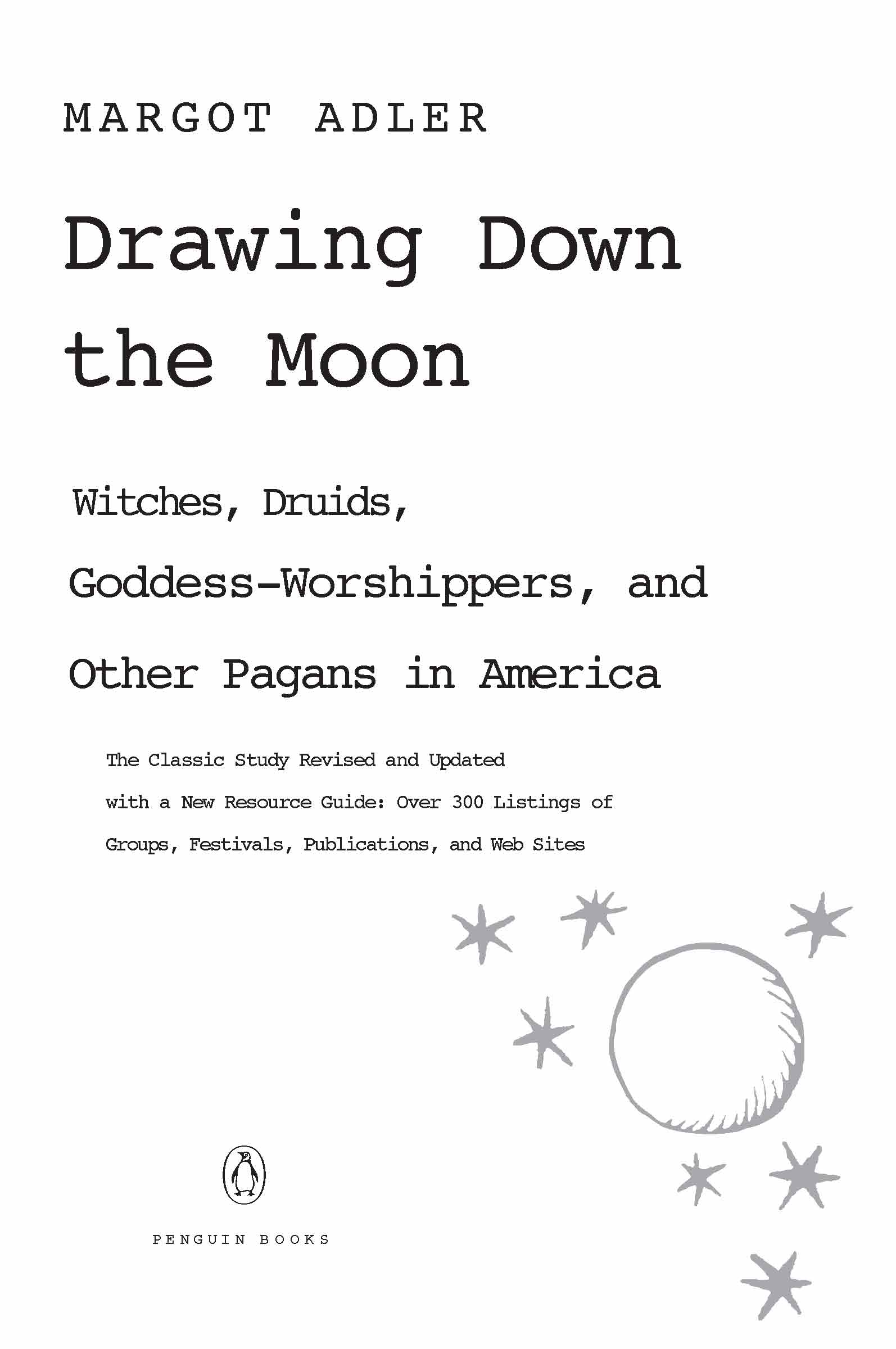 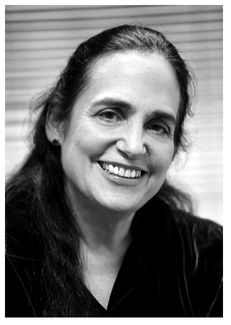 penguin books
DRAWING DOWN THE MOON
Margot Adler has been a radio producer and journalist since 1968, pioneering live, free-form talk shows on religion, politics, women's issues, and ecology. She lectures on the subject of Paganism and earth-centered traditions and leads workshops on the art of ritual, celebration, and song. She is currently the New York Bureau Chief for National Public Radio as well as a well-known correspondent on NPR's All Things Considered and Morning Edition. She is also the host of Justice Talking, a national radio show on constitutional issues. Her most recent book is Heretic's Heart: A Journey Through Spirit and Revolution.

Preface to the New Edition
On All Hallows Eve, 1979, Drawing Down the Moon was published in New York City. On the same day, Starhawk's The Spiral Dance was published in California. These two books continue to be many people's introduction to modern Paganism, Wicca, and Goddess spirituality. These books have different perspectives, but they both envisioned a Pagan movement much larger than the one that existed when the books were first published. That larger movement has come to pass, although it is different than either author dreamed or expected.
When Drawing Down the Moon was published, modern Pagans, Heathens, Druids, and Wiccans in the United States numbered less than one hundred thousand people. Today many estimates are four to seven times that number, with more than a million worldwide.
In the more than twenty-five years since Drawing Down the Moon was published, the world is much changed, but strangely, although many of the details have altered, and some of the early organizations no longer exist, the root ideas in Drawing Down the Moon seem more relevant now than they did in 1979.
The message of Drawing Down the Moon has always been that the spiritual world is like the natural worldâonly diversity will save it. Just as the health of a forest or fragrant meadow can be measured by the number of different insects and plants and creatures that successfully make it their home, so only by an extraordinary abundance of disparate spiritual and philosophic paths will human beings navigate a pathway through the dark and swirling storms that mark our current era. “Not by one avenue alone,” wrote Symmachus sixteen centuries ago, “can we arrive at so tremendous a secret.”
The dominant spiritual trend of our time is militant fundamentalism. Suicide bombers die as martyrs in Palestine and Iraq. In this country, fundamentalists fight to change textbooks and ban books. Like corporations that reduce developing countries to poverty by turning all acreage to a single crop, the belief that there is one word, one truth, one path to the light, makes it easy to destroy ideas, institutions, and people. Almost a hundred years ago, the historian James Breasted wrote this controversial sentence worth contemplating: “Monotheism is but imperialism in religion.”
If you go far enough back, all our ancestors were Pagans. They practiced religions that had few creeds or dogmas. There were no prophets. There were myths and legends, but no scriptures to be taken literally. These religions were based on the celebration of the seasonal cycles of nature. They were based on what people did, not what people believed. It is these polytheistic religions that are being revived and re-created by Neo-Pagans today. This book is the story of that Pagan resurgence.
Drawing Down the Moon is grounded in the view that reality is multiple and diverse. It stands against the totalistic religious and political views that dominate the world. It says, “strive to be comfortable in chaos and complexity. Be as a shaman who walks in many worlds.” The book's basic assumption is that your own spiritual path is not necessarily mine. In fact, even the most extreme and authoritarian religions can be seen as appropriate individual spiritual pathsâbut they are only one flower in a garden.
Now, there are many anti-authoritarian religious groups, and many Christian, Muslim, and Jewish groups among them, not to mention Quakers, Bahais, Unitarians, and countless others. What's unusual about modern Pagans is that they remain anti-authoritarian while retaining rituals and ecstatic techniques that, in our time, are used mostly by dogmatic religions or indigenous tribal groups.
Since Pagans are a very diverse group, it is wrong to say all Pagans believe this or that, but here are some beliefs that many people in this book share:
The world is holy. Nature is holy. The body is holy. Sexuality is holy. The imagination is holy. Divinity is immanent in nature; it is within you as well as without. Most spiritual paths ultimately lead people to the understanding of their own connection to the divine. While human beings are often cut off from experiencing the deep and ever-present connection between themselves and the universe, that connection can often be regained through ceremony and community. The energy you put out into the world comes back.
There are now many good books on modern Paganism, Witchcraft, and Goddess spirituality, and many important scholarly works. But this book is still the only detailed history of the origins of Neo-Paganism in the United States. So, in preparing this new edition, there was a constant tension between keeping the book as a piece of history and detailing the journey that modern Paganism has made over the last twenty years, the time that's passed since the last real revision of this book. Many people have asked me to only put in additions, not changes. In the end I have taken a middle course, the same one I took in 1986âleaving most of the book intact, making some changes, cutting out some parts of chapters that seemed overly long (“Living on the Earth”), putting one chapter that seemed really outdated into an appendix (“Scholars, Writers, Journalists, and the Occult”), expanding greatly the sections on Pagan Festivals, Heathenism, Gay Spirituality, the Erisians, and Wiccan Traditions, and adding some new pages on Pagan studies. I also created a much larger up-to-date resource guide to Pagan groups, festivals, and publications and Web sites, more than three hundred listings, with many more Druid and Heathen groups, as well as more entries from Europe, Australia, Canada, and South Africa. Despite this, the explosion of Pagan festivals (more than 350 in the United States), Web sites (at least 5,000, probably more), and groups means that the Pagan movement is becoming so large it is much more difficult to chart.

Use Your Loaf: How to bake bread at home and get perfect results by Daly, Jason
The Wicked Day by Christopher Bunn
Her Loving Husband's Curse by Meredith Allard
The Runaway Princess by Kate Coombs
Andrea Pickens - [Lessons in Love 03] by The Storybook Hero
A Summer Remade by Deese, Nicole
Finding Alice (Alice Clark Series) by DiGiglio, Andrea
Ambassador 4: Coming Home by Jansen, Patty
Deadly In Stilettos by Chanel, Keke
The New Kid by Mavis Jukes