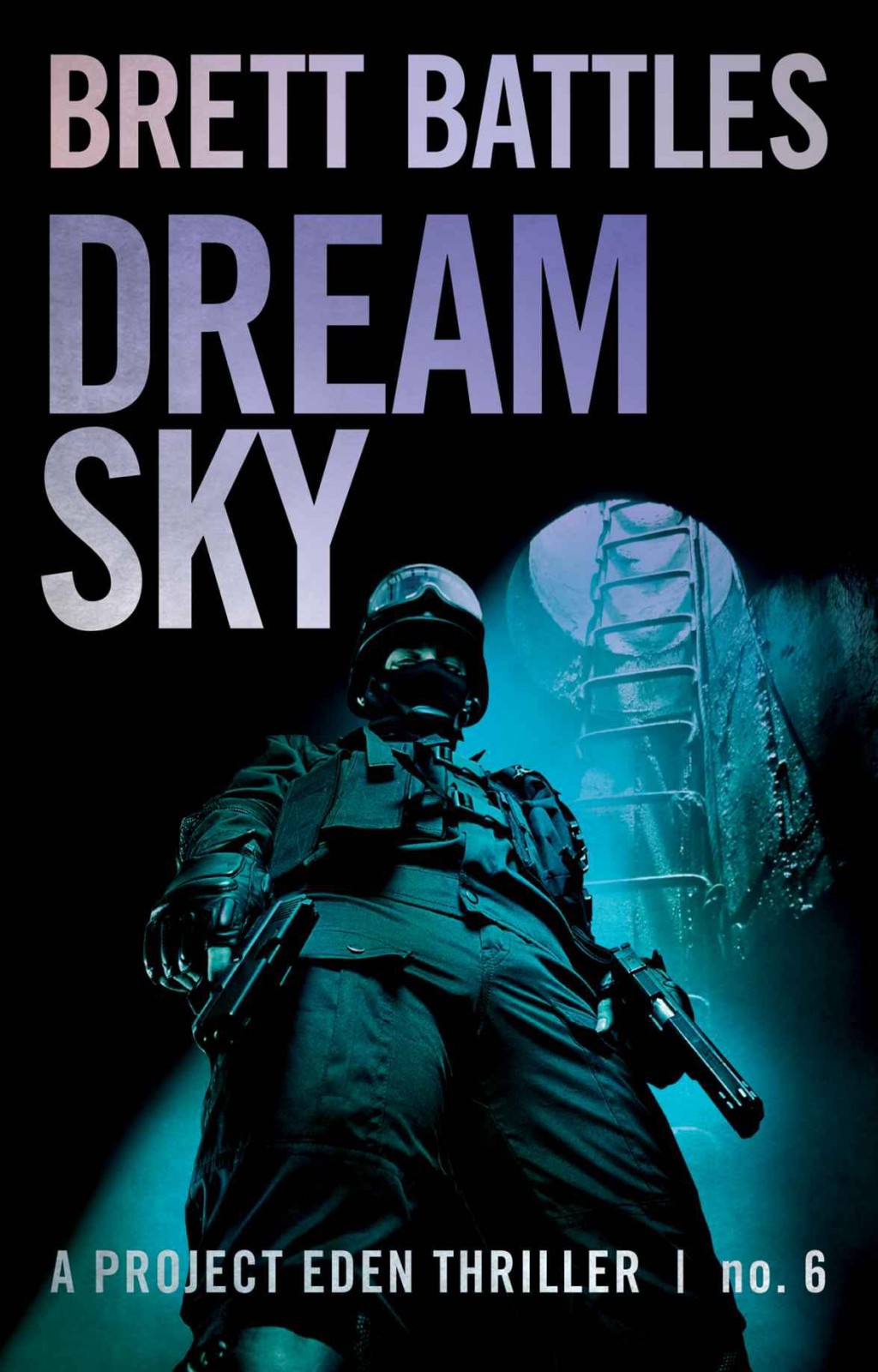 Praise for the Project Eden Thrillers

“
Sick
didn’t just hook me. It hit me with a devastating uppercut on every primal level—as a parent, a father, and a human being.”—Blake Crouch, author of
Run

“A
gem of an outbreak story that unfolds like a thriller movie and never lets up, all the way to the last page. Absolutely my favorite kind of story!”—John Maberry,
New York Times
bestselling author

“Not only grabs you by the throat, but by the heart and gut as well, and by the time you finish you feel as if you've just taken a runaway train through dangerous territory. Buy these books now. You won't regret it.”—Robert Browne, author of
The Paradise Prophecy

“Like a fever,
Sick
makes you sweat and keeps you up all night, wondering what the hell is happening. It’ll make your heart race like someone shot you with an EpiPen. You think Battles was badass before? He just cranked it up to 500 joules. CLEAR!”—PopCultureNerd.com

“Brett Battles at his best, a thriller that also chills, with a secret at its core that’s almost too scary to be contained within the covers of a book.”—Tim Hallinan, author of the Edgar-nominated
The Queen of Patpong

SHADOW OF BETRAYAL (US)
/
THE UNWANTED (UK)

“Off the Clock—A Jonathan Quinn Story

THE PULL OF GRAVITY

DREAM SKY is a work of fiction. Names, characters, businesses, organizations, places, events, and incidents either are the product of the author’s imagination or are used fictitiously. Any resemblance to actual persons, living or dead, events, or locales is entirely coincidental.

For more information about the author, please visit
www.brettbattles.com
.

T
HOSE WHO HAD
survived the initial outbreak of the Sage Flu were relieved when they saw and heard the message from the secretary general of the United Nations telling them a vaccine was available. But the message was merely a means to lure the living to Project Eden’s holding facilities, where individual judgments could be made on whether or not the survivors were valuable enough to keep alive.

After Ben Bowerman buried his family in a San Mateo, California, cemetery, he headed south to find his girlfriend Martina. He stopped first in Santa Cruz, where he’d been attending college, to pick up a present he’d purchased for Martina. While there, he discovered Iris Carlson locked in a basement, unaware of what had been going on. He took her with him, but when he woke the next morning, he discovered she’d stolen his Jeep and most of his things.

In Ridgecrest, California, Martina Gable’s band of friends decided to leave their hometown and travel to the survival station in Los Angeles. Martina had different plans. Three of her friends stayed with her, and together they went in search of Martina’s boyfriend, Ben. What Martina found was Ben’s Jeep being driven by someone she didn’t know, someone who told her Ben was dead.

In Mumbai, Sanjay and Kusum investigated the survival station, suspecting it wasn’t what it claimed to be. Their observations confirmed their suspicions, but in the process, Kusum and a few of the couple’s colleagues were taken prisoner by Project Eden. Sanjay mounted a rescue operation, not only for his friends but also the others being held. He and Kusum then went back in to steal as much vaccine as they could find.

The survivors on Isabella Island anxiously awaited the return of the UN. When a plane carrying medical personnel finally landed, the island occupants received their inoculations. Afterward, Robert and a few others met with the people from the plane and learned they weren’t from the UN, that the UN message was a lie. The plane then left, but Rich “Pax” Paxton stayed behind to help convince the rest of the island residents that the trouble was not over. He was proven right when another plane approached and sprayed the island with Sage Flu instead of landing. Through Pax’s quick action, everyone took cover inside the resort.

Outside Washington DC, Tamara Costello and Bobby Lion located an NSA communications facility, and set to work finding a way to use the equipment to replace the fake UN message, which continued to play over the airwaves, with one of their own. After several obstacles, Bobby was able to get the system to work, but they couldn’t play their prerecorded message and Tamara had to convey it live, over and over.

The Resistance had split into two groups. The larger group traveled from the Ranch in Montana to the Resistance’s alternate base at Ward Mountain North, Nevada. The smaller group, led by Matt Hamilton, the leader of the Resistance, waited a few days for Daniel Ash to recover from his wounds, until a storm forced them to leave. But Matt did not lead his band of people directly to Nevada. Instead, they headed south to New Mexico. Matt had received a message from a contact, known as C8, inside Project Eden, informing him that the Project’s principal director was at the Project Eden base outside Las Cruces, New Mexico. When his team arrived in the southern New Mexican town, Matt headed to the base alone, rendezvousing with C8. Inside the base, Matt and C8 placed sarin gas dispensers throughout the facility. Matt also set up remote-controlled explosives near the central elevator. The plan was to wait for a meeting the principal director was scheduled to attend, but before the meeting happened, Tamara Costello’s live broadcasts appeared, replacing the fake UN message. Realizing he couldn’t wait any longer, Matt set off the explosives and the gas. Once the way was clear, he headed to the principal director’s office, where he found the man and his assistant still alive. Matt killed the principal director and left. But before he could reach the stairs that would take him outside, he was shot by the principal director’s dying assistant.

Ash rushed toward the burning Project Eden facility, hoping Matt had been able to escape. When he saw his friend standing outside the building, he was momentarily relieved. But then Matt fell to the ground. Kneeling at his side, Ash saw his friend’s wounds were grave, but the leader of the Resistance was determined to pass on some information.

Ash asked what the message meant, but Matt Hamilton was dead.

As expected, there was no dissent.

“It has now been over ten hours since our last communication with NB219 or Principal Director Perez,” Celeste Johnson told the others partaking in the video conference. “Due to this silence, and per Project guidelines, this emergency meeting of the directorate has been called.”

The irony that this was the first meeting of the directorate since Perez had taken charge of the Project was not lost on them. He had turned the group into merely an advisory council—one he had yet to call on—and the members had little doubt he had been planning on disbanding them completely.

The current group was actually the second incarnation of the directorate, since the members of the pre-pandemic board had all been killed at Bluebird on Implementation Day. Out of that initial post-KV-27a-release directorate, only two members remained: Dr. Henry Lassiter, stationed at NB772 in southern France; and Erik Halversen at NB405 on the outskirts of Hamburg, Germany. The rest had all been appointed to their positions by Director Perez: Johannes Yeager at NB338 outside Rio de Janeiro, Brazil; Kim Woo-Jin at NB202 near Seoul, Korea; Parkash Mahajan at NB551 in Jaipur, India; and Celeste at NB016 in New York City, USA.

“If I may,” Dr. Lassiter said from his monitor.

“As ranking Project member, I believe the role of principal director falls to me. I suggest we all agree to that immediately so we can move on to more important matters.”

Celeste looked at the different screens in front of her. Yeager, Kim, and Mahajan were all trying very hard to keep their faces neutral. Halversen, on the other hand, was nodding in agreement.

“I understand your thoughts on the manner,” Celeste said. “As we all do.”

The doctor looked surprised. “Mr. Kim, we can work out a solution to whatever problem you’re—”

“Dr. Lassiter,” Celeste said. “Mr. Kim is not the only one who has an issue with your suggestion. I believe you will find that Mr. Yeager and Mr. Mahajan share a similar point of view.”

“For God’s sake,” Lassiter said, “this is not the time for infighting. We are at a critical point in the plan, yet for the second time in two weeks we have lost our leader. We need a smooth transition to someone familiar with how things work at the top. What we don’t need is a split vote.”

“Split vote?” Celeste said. “I think you’ve misunderstood. I would not vote for your ascension to principal director, either.”

“No. Absolutely not. You four are only on the directorate because Perez needed bodies in seats so that the membership felt everything was fine. You wouldn’t even be on this call otherwise.”

The Forgotten by Tamara Thorne
Cowboy Behind the Badge by Delores Fossen
Life in the Fat Lane by Cherie Bennett
Wherever There Is Light by Peter Golden
An Echo in the Bone by Diana Gabaldon
THE DOMINO BOYS (a psychological thriller) by D. M. Mitchell
A Dream of Desire by Nina Rowan
Shift of Time (A Rue Darrow Novel Book 1) by Audrey Claire
Love Love by Beth Michele
Destined for Love by Diane Thorne