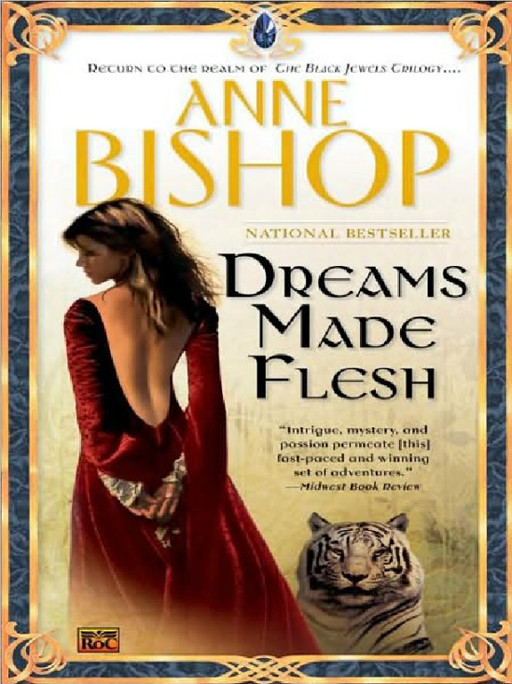 Set in the realm of The Black Jewels trilogy, this collection features four brand-new revelatory stories of Jaenelle and her kindred.

The "scheming woman seeks to control powerful man" plot substitutes for anything truly new or surprising in Anne Bishop's Dreams Made Flesh, a collection of four novellas set in the realm of her Black Jewels trilogy (Daughter of the Blood, etc.).

As always, the author's vision of the demands-and earthy pleasures-of powerful magic compels, but these fragmentary shorter works lack the depth to be found in her novels.

Anne Bishop is a winner of the William L. Crawford Memorial Fantasy Award for The Black Jewels Trilogy, presented by the International Association for the Fantastic in the Arts.

The magic of the Darkness is passed from one race to another as new caretakers for the Realms are chosen in this tale of the origin of the Jewels of power.…

The Prince of Ebon Rih

Under the cold eye of his aristocratic mother, Eyrien Warlord Prince LucivarYaslana struggles with his feelings for his housekeeper, the hearth witch Marian.…

The Queens of Zuulaman believe they can coerce Saetan into doing their bidding by threatening the life of his child…only to unleash the High Lord of Hell's incalculable fury.…

Daemon fears Jaenelle will never recover from sacrificing her Black Jewels to purge the Realm of the corrupt Queens. He desires nothing more than to heal her, body and soul…and help her unravel the secret of Twilight's Dawn, the Jewel Jaenelle now possesses.…

Praise for The Black Jewels Trilogy

"A terrific writer… the more I read, the more excited I became because of the freshness of [her] take on the usual high fantasy setting, the assurance of [her]

language, all the lovely touches of characterization that [she slips] in so effortlessly." …Charles de Lint

"Rich and fascinatingly different dark fantasy, a series definitely worth checking out." …Locus

"A darkly fascinating world…Vivid and sympathetic characters, a fascinating and fully-realized magical system, lavish and sensuous descriptions, and interesting world building.… Many compelling and beautifully realized elements. A terrific read."

"A high voltage ride through a new realm. Bishop draws her characters with acute emotion [and] leaves the reader lusting for her next novel." …Lois H. Gresh, coauthor of The Termination Node

"[Anne Bishop's] poignant storytelling skills are surpassed only by her flair for the dramatic and her deft characterization… a talented author."

"When I first read Daughter of the Blood by Anne Bishop, I was blown away by the vividness of her writing. Dark, morbid, sinister, and yet it holds you completely fascinated and spellbound by its beauty. Once I'd begun reading… I couldn't bring myself to put down the book and leave the world that Anne Bishop had magically spun around me… Rich in both positive and negative emotions and intense in its portrayal of human behavior and human desires. At the same time, it also has many humorous moments…. One of the most original and readable books in the fantasy genre."

"Has immense appeal for fans of dark fantasy or horror. Most highly recommended." …

Praise for The Invisible Ring

"[An] entertaining otherworlds fantasy adventure with battles and dangers and chases." …Chronicle

"Plenty of adventure, romance, dazzling wizardly pyrotechnics and internal workings of Bishop's unique and fascinating hierarchical magic system. The plot strands' convergence is skillfully handled, building tension and suspense right up to the end… Bishop's world is rich in strongly dark elements balanced by a firm belief in ideals like loyalty and love.

Bishop is also superb at depicting the essence of her characters through dialogue, which can often be quite witty or emotionally heartwarming or chilling at just the right moments. Then there's the author's overall sublime skill as a writer, blending the darkly macabre with spine-tingling emotional intensity, mesmerizing magic, lush sensuality, and exciting action, all set in a thoroughly detailed invented world of cultures in conflict, based on ingeniously reversed genre cliches. The Invisible Ring will serve as an enticement, whetting the appetite to explore more of the realms in the Black Jewels trilogy." …SF Site

"Anne Bishop has an awesome knack for characterization, used to great effect in this novel. It's a bittersweet story, and you'll love every word of it. Readers of fantasy and romance will love this book, and of course it's a must-have for Bishop fans. Most highly recommended."

for Debra Dixon and Annemarie Jason

My thanks to Blair Boone for continuing to be my first reader, to Debra Dixon for being second reader, to Laura Anne Gilman for giving me the go-ahead to do these stories and to Anne Sowards for seeing the book through to completion, to Kandra for her continued patience in keeping up the Web site, and to Pat and Bill Feidner for the dinners and laughter and all the other things that make them special.

l The Prince of Ebon Rih

*Opal is the dividing line between lighter and darker Jewels because it can be either.

When making the Offering to the Darkness, a person can descend a maximum of three ranks from his/her Birthright Jewel.

Blood male…a general term for all males of the Blood; also refers to any Blood male who doesn't wear Jewels Warlord…a Jeweled male equal in status to a witch Prince…a Jeweled male equal in status to a Priestess or a Healer Warlord Prince…a dangerous, extremely aggressive Jeweled male; in status, slightly lower than a Queen Females: landen…non-Blood of any race Blood female…a general term for all females of the Blood; mostly refers to any Blood female who doesn't wear Jewels

witch…a Blood female who wears Jewels but isn't one of the other hierarchical levels; also refers to any Jeweled female

Healer…a witch who heals physical wounds and illnesses; equal in status to a Priestess and a Prince

Priestess…a witch who cares for altars, Sanctuaries and Dark Altars; witnesses handfasts and marriages; performs offerings; equal in status to a Healer and a Prince

Black Widow…a witch who heals the mind; weaves the tangled webs of dreams and visions; is trained in illusions and poisons

Queen…a witch who rules the Blood; is considered to be the land's heart and the Blood's moral center; as such, she is the focal point of their society Places in the Realms Mentioned in these Stories

Black Valley…valley that is the Keep's territory

Ebon Askavi (aka the Black Mountain, the Keep)

Ebon Askavi (aka the Black Mountain, the Keep)

Ebon Rih…valley that is the Keep's territory

HELL (the Dark Realm, the Realm of the dead)

Ebon Askavi (aka the Black Mountain, the Keep) SaDiablo Hall AUTHOR'S NOTE The "Sc" in the names Scelt and Sceval is pronouced "Sh."

Her web shook with the violence of the storm. AboveWorld roared and flashed, turning dark-time to light-time. But there was something more, something different that trembled through the strands of silk. Something she'd never felt before.

AboveWorld roared and flashed again. Then something screamed…a terrible shuddering in her web…and a piece of Above World crashed into World, ripping, tearing, roaring, shrieking.

Dark Wet splashed her, splashed her web, at the same moment something struck the web near the center. Prey?

Hunger overcame hesitation. She hurried along the threads, intending to secure her meal before heading back to the safer, more sheltered edge of her web.

But the something was hard and had no meat. As she tried to sink her fangs into it, she ingested some of the Dark Wet, and that… filled her, flowed through her, sang inside her.

After cleaning off every bit of Dark Wet, she discarded the something and hurried back to the sheltered edge of her web to wait out the storm.

Light. And a hunger. For meat, yes. But also for something more.

Leaving her web, she traveled along the Rough that stretched out over World until she reached a place where the piece of Above-World had crashed into World. The Dark Wet still sang inside her, almost too quiet to feel, but it was enough to guide her to more of the Dark Wet.

Fixing an anchor thread to the Rough, she spun out silk. The World trembled with anger. The air quivered with grief and despair… and longing.

Her legs touched the piece of AboveWorld. Hard, like the something that had struck her web. Moving cautiously, she found a place where the Hard was torn away, revealing meat…and the Dark Wet.

After consuming as much of the Dark Wet as she could, she sank her fangs into meat and pumped her venom into the spot. It would only liquefy a tiny bit of meat, but that tiny bit would feed her well.

So she spun a web as close as she could to the meat…and the Dark Wet that seeped over the meat.

In dreams, she unfurled her wings and sailed through the Darkness—a vastness that was outside the body, and yet the body became its vessel; a power reached by heart and mind and spirit. Through it flowed the whispers of creation… and the silence of destruction. Her race had spiraled down its chasms and canyons and strange abysses for years beyond memory—and had understood that they would never understand this place that was, and wasn't, a place.

In dreams, the vision of webs shining in the Darkness hadn't dazzled and overwhelmed her mind, hadn't blinded her to the danger of the storm, and she had reached the caves on this island that she had chosen as her final resting place.

But the wounds received because of the storm were fatal, and the caves were too far away.

No. Not quite true. She could have used her power to shift her broken body to the caves, but she felt a small tug, a small promise that her unique gift would not be lost if she remained where she was.

So in a dream that was more than a dream, she sent her last vision to her mother, Draca, showing her Queen how the new caretakers of the world would be able to travel safely through the Darkness: shimmering, colored webs of power stretched through that vastness…pathways that could be reached from the Realms.

She could not say why the beautiful symmetry of the web resonated so strongly inside her, but the image didn't fade from her mind, despite the agony that clawed at her flesh. Nor could she say why, as she drifted between visions and dreams, she felt certain there was something nearby, something small and golden, that would be able to hold her particular gift.

When She Was Gone by Gwendolen Gross
Hide and Seek by Larrinaga, Caryn
Don't Let Go by Nona Raines
Make Me Yours Evermore, Book 3 by Cari Silverwood
Don't Mess With Texas by Christie Craig
The Chinese Maze Murders by Robert van Gulik
Before the Larkspur Blooms by Caroline Fyffe
Blissful Vol. 1 by Clarissa Wild
A Captive Heart by Scott, Patricia
Scars that Run Deep by Patrick Touher