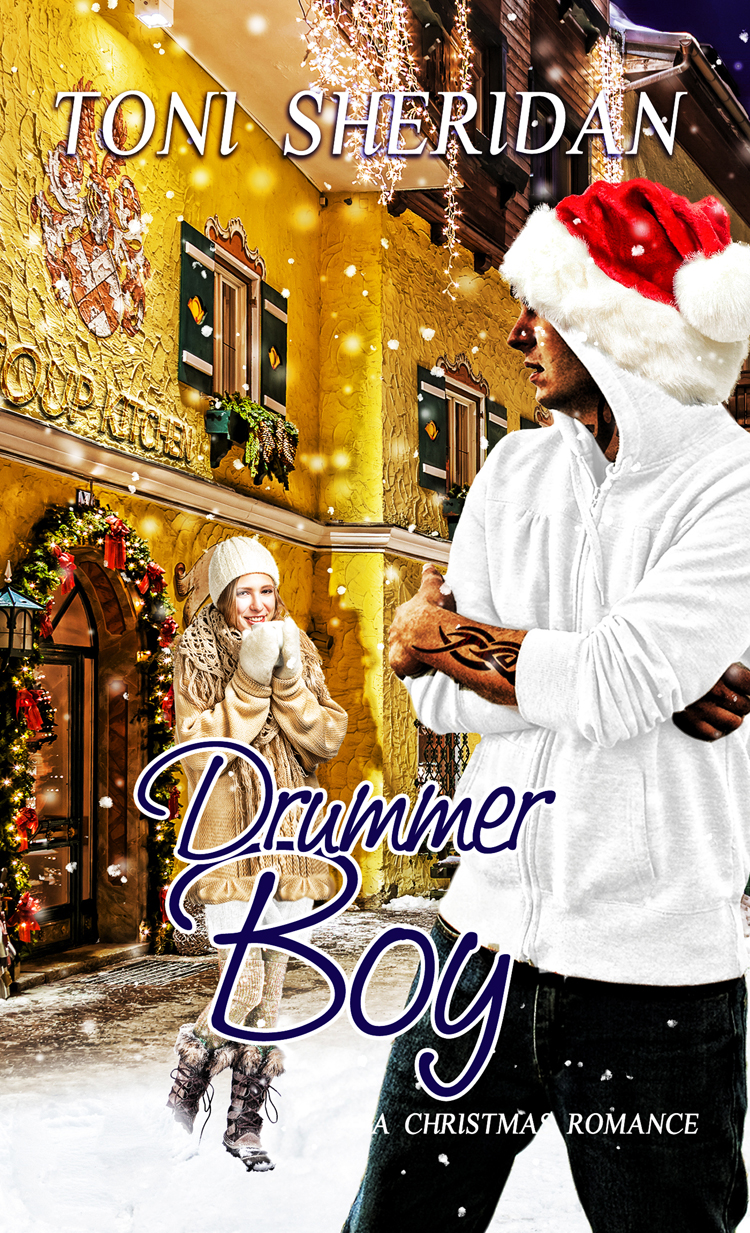 For Chris, my husband and love. I never thought marriages could work out, yet here we are after all these years, still going strong. I'm so grateful to God, and to you, for showing me I was wrong.

Slowing her pace, Jane inhaled frosty air until it felt as if her lungs would burst. She released the breath in a gusty sigh.

“Gorgeous,” she whispered, looking beyond the dark, lonely parking lot to the eternal sky above. It sparkled with stars that looked as big as her fist, as if God had spilled a purse of diamonds across a swath of black velvet. She shook her head at her silly self.
Diamonds. Velvet
. Good thing she was at the end of her rotation, not the beginning. She didn't need a lot of shuteye to get by, but between doing her own shifts and covering for Monica, she actually felt a little sleep deprived. The tiredness was making her fanciful. Not her normal state. Not at all.

Jogging on the spot in front of her car, she stretched her arms over her head.

“You went running after a twelve-hour shift? I can't believe you,” said someone behind her.

Jane recognized the voiceâMargaret from Maternityâand turned, smiling. “I can't help it. I've always been energetic. It's a curse.”

“A curse I wish you'd share,” Margaret grumbled. “I've heard of exercising after work. I've just never seen anyone do it. I'm dead on my feet. But enough complaining.” Her tone brightened. “It's Christmas, and I'll be able to sleep for a few hours before the kids roar into my room with their stockings. I've got seven days off now. Merry Christmas, Jane!”

Margaret blew on her hands. “I don't have to go running around the streets to know that. Brrr.”

Jane started her car, but let it idle until the windows fully defrosted. Yes, she was more than ready to be home now, but there was no point rushing and risking an accident. Better late in this world than early in the next as her sister Candy would say.

Margaret was long gone when Jane pulled out of the parking lot, and the streets were fairly quiet, though Jane was always surprised by how many people were out late at nightâor early, early in the morning.

She smiled as she shoulder-checked and moved through the last big intersection between her and home. Maybe Candy had left her a plate of goodies. She probably had. She was a great sister that way. Jane was trying to think of a special way to say thank you when she saw the headlights. A red pickup fishtailed around a corner and seemed to be coming straight at her.

She blinked, but it was no optical illusion. The truck was solidly over the yellow, totally taking up her lane. Another vehicle, also traveling toward herâin its correct laneâmade it impossible for her to move over. There was nowhere to go.

She hit her brakes and lay on the horn. Her vehicle skidded to a stop, but it wasn't enough.

Her last conscious thought through the noise of crumpling steel and the shriek of metal on metal was that the man driving still hadn't seen her. His face through the windshield, freakishly clear to her, was confused and dopey-eyed, expressing the “What?” of someone just waking up.

The room was filled with the gloomy, gray light of tentative day, and the rustle of bedside curtains and rattling clank of the kitchen cart were familiar but confusing. Breakfast trays were being handed out to patients throughout the ward, but why was Jane there for it? They had kitchen staff for that.

Tears pricked at the back of Jane's eyes, and she tuned out whatever else Clarissa was saying and said a silent prayer for the victim. Whoever it was had a long, painful recovery ahead of them.

Jane reached out to take the cover off the plate and show it to her patient. It was so weird that she couldn't see the patient's face. And it was extra weird that she was back to kitchen duty. She hadn't delivered food to patients since she was a teenaged volunteer.

Her hand wouldn't move. She couldn't lift the cover. Her other hand was being held? She shook her head a little. Heard a small croak-throated groan. Was that
her
?

One of her hands seemed to be tied down. Blankets heavy as concrete sheets weighted her to the bed. Everything hurt. Everything. And she couldn't move. She still couldn't move! Jane's heart pounded, and itchy panic crawled over her skin.

Two glaring headlights popped into her memory. A grinding scream of metal on metal replayed in her head.

“That
is
kind of ironic,” she heard her sister Candy mutter.

“What is?” Jane rasped and then swallowed hard. The action felt like a knife sliding down her throat, but at least her voice worked again, sort of. “And why am I tied up?”

Cold, heavy dread settled in Jane's stomach, and she broke into a sweat. It really was her. In a hospital bed. Injured. She couldn't bear the concern in Candy's reddened eyes. Everything flooded back, including pain, pain, pain. What had they given her, morphine or oxycodone? Either way, the meds were wearing off. She needed more.

She forced energy she didn't feel into her words. “Merry Christmas, eh?”

Candy's smile trembled, perhaps closer to tears than cheer. “Well, it's getting better all the time.”

Jane was saved from having to utter anything else when the doctor on call appeared. Henricksen. Not her first choice, but not a complete numbskull. She tried to focus on what he was saying and hoped Candy was doing a better job than she was.

Giving medical information was completely different than receiving it.

Jane's emotions kept her from processing the terms he bandied about so casually. Her brain stuttered and stalled over the details, at what they meant for her
personally
. She could hardly breathe, but now it didn't feel like a side effect from the medication.

Her lung and ribs would heal. The blood they'd found elsewhere in her abdomenâshe'd had blood in her abdomen? Apparently, yesâand they'd keep an eye on it? Well, thanks so much, she wanted to say scornfully, but he was rushing on.

His concern was her arm.

She must've held it out in front of her, perhaps in an unconscious, futile attempt to block the impact when the driver of the oncoming vehicle crossed the centerline. The exploding airbag snapped her hand back, compressing it against the car's roof. Three fingers and several bones in her hand were crushed. Her wrist was broken in two places and bone fragments had pierced through her skin. Her ulna and radius were also fractured. The swelling was so bad that the full extent of damage was hard to examine.

They were trying to get a surgeon in early, but if unsuccessful, they had Jane booked for surgery the next day.

The doctor discussed the use of interior and exterior pins, screws, plates and rods to hold bone fragments in place.

Jane stared at Candy, willing her to understand because she couldn't.

“Did you follow most of that, Jane?” Henricksen asked.

She nodded but couldn't speak.

“You're bound to be a bit fuzzy. Your sister can bring you up to speed if there's something you don't recall, and, of course, we'll talk more later. Get Candy or a nurse to write down any questions you may have.”

Jane turned her face away as the doctor started to talk recovery. The dead weight under the blanket? The limp, log-like thing lying over her ribcage, crushing her like a restraining bar? That was her arm.

Henricksen finished blathering and squeezed Jane's foot lightly. “I know it probably doesn't seem like it right now, but you're lucky. They had to cut you out of your car with the Jaws of Life. To sustain only non-life threatening injuriesâ¦”

Jane's sinuses burned again. Irrationally, she hated the kindness in his voice. “Yeah, lucky,” she said, her gaze on the gray, socked-in world just outside the windowâas flat and void of hope and interest as her near future now seemed.

Candy seemed relieved, almost giddy. “So she'll pull through just fine? Well, that's the important part,” she said. She hadn't gotten it at all, but Jane had.

Jane was all too aware of what she faced. Her arm would never be the same. It might never regain its full strength. And it would be ugly to boot.

But Jane, as much as she wanted to say something comforting or make some joke to ease the worry in Candy's voice, couldn't come up with a word. She feigned sleep.

“I'm going to call the kids and let them know what's up,” Candy whispered. “I'll be right back.”

Jane listened to Candy tiptoe to the door and then croaked, “I'm going to look like a horror show, pins sticking out all over my hand.”

Candy turned back. “Nah, you'll pull it off, make it hip or something.”

Jane tried to imagine that. Couldn't.

Candy's eyes brightened with moisture. “Don't do that to me again. I can't lose you. It would be too much.”

Jane knew how hard this must be for Candy, visiting her here, worried she was near death, reliving, no doubt, awful memories of their mother's last hours after
her
car accident. Tears leaked out of the corners of Jane's eyes. Great. Now she was turning into a crybaby. “Yeah, ditto,” she whispered. “Now, go call. Tell them I love them and say Merry Christmas for me.”

“I will and wait. I brought you something.” Candy fetched her purse and rummaged through it. “Close your eyes.”

Candy slipped something onto the small table by the bed and then placed a second item onto Jane's head.

Jane opened her eyes. “What's this?”

“You know the tradition.”

Jane cautiously reached her good hand up to touch the soft felt cap she'd received in her stocking when she was eight and had worn every Christmas Day since. Then she glanced down at her bedside table. A miniature ceramic stable glowed in the dim lighting, its tiny Mary and Joseph and Baby Jesus the picture of peace amidst trials.

“You brought my favorite ornament, too.” She leaned back against her pillows, exhausted by even this small exchange.

Til a Death Do Us Part: A Bakery Detectives Cozy Mystery by Stacey Alabaster
Kindred in Death by J. D. Robb
The Questory of Root Karbunkulus - Quill by Kamilla Reid
Bright's Light by Susan Juby
The Inquest by Stephen Dando-Collins
The White Road-CP-4 by John Connolly
The Last Days of a Rake by Donna Lea Simpson
The Mystery of the Pink Phoenix Papers by Claudia Mauner
Rasputin's Bastards by Nickle, David
The Pen Friend by Ciaran Carson