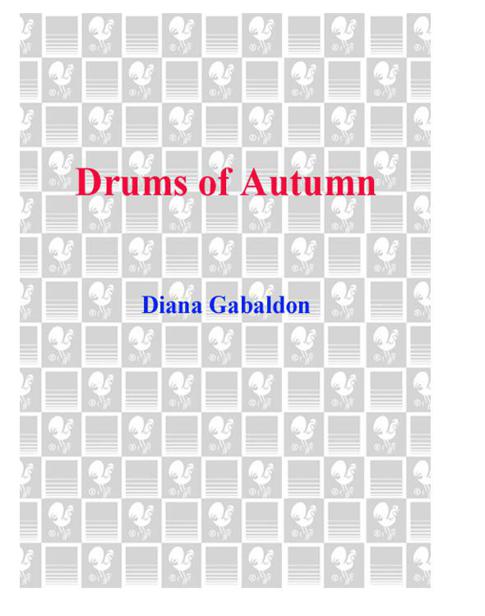 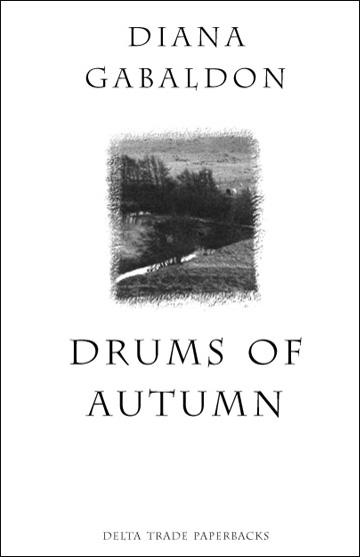 Praise for Drums of Autumn

Excerpt from The Fiery Cross

This book turned out to have a lot to do with fathers,
and so it’s for my own father, Tony Gabaldon, who also tells stories.

“IMPOSSIBLE TO PUT DOWN.”

The author’s grateful thanks to:

My editor, Jackie Cantor, who said, when informed that there was (ahem) actually another book in this series, “Why am I not surprised to hear this?”

Susan Schwartz and her loyal minions—the copyeditors, typesetters, and book designers—without whom this book would not exist; I hope they eventually recover from the experience.

My husband, Doug Watkins, who said, “I don’t know how you go on getting away with this; you don’t know
anything
about men!”

My daughter Laura, who generously allowed me to steal two lines of her eighth-grade essay for my Prologue; my son Samuel, who said, “Aren’t you
ever
going to finish writing that book?” and (without pausing for breath), “Since you’re still busy writing, can we have McDonald’s again?” and my daughter Jennifer, who said, “You
are
going to change clothes before you come talk to my class, aren’t you? Don’t worry, Mommy, I have an outfit all picked out for you.”

The anonymous sixth grader who handed back a sample chapter passed around during a talk at his school and said, “That was kind of gross, but really interesting. People don’t really
do
that, do they?”

Janet MacConnaughey and Keith Sheppard, for Latin love poetry, macaronics, and the original lyrics of “To Anacreon in Heaven.”

Ron Wodaski, Karl Hagen, Bruce Woods, Rich Hamper, Eldon Garlock, Dean Quarrel, and several other gentlemen members of the CompuServe Writers Forum, for expert opinions on what it feels like to be kicked in the testicles.

Marte Brengle, for detailed descriptions of sweat lodge ceremonials and suggestions on sports cars. Merrill Cornish, for his stunning description of redbuds in bloom. Arlene and Joe McCrea, for saints’ names and descriptions of plowing with a mule. Ken Brown, for details of the Presbyterian Baptismal rite (much abridged in the text). David Stanley, Scotland’s next great writer, for advice on anoraks, jackets, and the difference between them.

Dr. Rosina Lippi-Green, for details of Mohawk life and customs, and notes on Scots linguistics and German grammar.

Mac Beckett, for his notion of new and ancient spirits.

Jack Whyte, for his memoirs of life as a Scottish folksinger, including the proper response to kilt jokes.

Susan Davis, for friendship, boundless enthusiasm, dozens of books, descriptions of pulling ticks off her kids—and the strawberries.

Walt Hawn and Gordon Fenwick, for telling me how long is a furlong. John Ravenscroft and miscellaneous members of the UKForum, for a riveting discussion of the RAF’s underpants, circa WWII. Eve Ackerman and helpful members of the CompuServe SFLIT Forum, for the publication dates of Conan the Barbarian.

Barbara Raisbeck and Mary M. Robbins, for their helpful references on herbs and early pharmacology.

My anonymous library friend, for the
reams
of useful references.

Arnold Wagner and Steven Lopata, for discussions of high and low explosives and general advice on how to blow things up.

Margaret Campbell and other online residents of North Carolina, for miscellaneous descriptions of their fair state.

John L. Myers, both for telling me about his ghosts, and for generously allowing me to incorporate certain elements of his physique and persona into the formidable John Quincy Myers, Mountain Man. The hernia is fictitious.

As always, thanks also to the many members of the CompuServe Literary Forum and Writers Forum whose names have escaped my memory, for their helpful suggestions and convivial conversation, and to the AOL folderfolk for their stimulating discussions.

A special thanks to Rosana Madrid Gatti, for her labor of love in constructing and maintaining the award-winning Official Diana Gabaldon Web Page (
http://www.dianagabaldon.com
).

And lastly to my mother, who touches me in passing.

I’ve never been afraid of ghosts. I live with them daily, after all. When I look in a mirror, my mother’s eyes look back at me; my mouth curls with the smile that lured my great-grandfather to the fate that was me.

No, how should I fear the touch of those vanished hands, laid on me in love unknowing? How could I be afraid of those that molded my flesh, leaving their remnants to live long past the grave?

Still less could I be afraid of those ghosts who touch my thoughts in passing. Any library is filled with them. I can take a book from dusty shelves, and be haunted by the thoughts of one long dead, still lively as ever in their winding sheet of words.

Of course it isn’t these homely and accustomed ghosts that trouble sleep and curdle wakefulness. Look back, hold a torch to light the recesses of the dark. Listen to the footsteps that echo behind, when you walk alone.

All the time the ghosts flit past and through us, hiding in the future. We look in the mirror and see the shades of other faces looking back through the years; we see the shape of memory, standing solid in an empty doorway. By blood and by choice, we make our ghosts; we haunt ourselves.

Each ghost comes unbidden from the misty grounds of dream and silence.

But another part, an older part, echoes always softly in the dark, “Yes, but it
could
be.”

We come and go from mystery and, in between, we try to forget. But a breeze passing in a still room stirs my hair now and then in soft affection. I think it is my mother.