Was it simply worry over the Proclamation? I couldn’t see why that should be, given that none of our folk had been involved in the Hillsborough riots.

“… a Presbyterian,” he was saying. He glanced over at me with a wry smile. “Like wee Roger.”

The memory that had niggled at me earlier dropped suddenly into place.

“You knew that,” I said. “You
knew
Roger wasn’t a Catholic. You saw him baptize that child in Snaketown, when we … took him from the Indians.” Too late, I saw the shadow cross his face, and bit my tongue. When we took Roger—and left in his place Jamie’s dearly loved nephew Ian.

A shadow crossed his face momentarily, but he smiled, pushing away the thought of Ian.

“She’d marry the lad if he were a Hottentot,” Jamie interrupted. “Anyone can see that. And I canna say I’d object overmuch to wee Roger if he
were
a Hottentot,” he added, rather to my surprise.

Jamie shrugged, and stepped over the tiny creek to my side, wiping wet hands on the end of his plaid.

“He’s a braw lad, and he’s kind. He’s taken the wean as his own and said no word to the lass about it. It’s no more than a man should do—but not every man would.”

I glanced down involuntarily at Jemmy, curled up cozily in my arms. I tried not to think of it myself, but could not help now and then searching his bluntly amiable features for any trace that might reveal his true paternity.

Brianna had been handfast with Roger, lain with him for one night—and then been raped two days later, by Stephen Bonnet. There was no way to tell for sure who the father had been, and so far Jemmy gave no indication of resembling either man in the slightest. He was gnawing his fist at the moment, with a ferocious scowl of concentration, and with his soft fuzz of red-gold plush, he looked like no one so much as Jamie himself.

“Mm. So why all the insistence on having Roger vetted by a priest?”

“Well, they’ll be married in any case,” he said logically. “I want the wee lad baptized a Catholic, though.” He laid a large hand gently on Jemmy’s head, thumb smoothing the tiny red brows. “So if I made a bit of a fuss about MacKenzie, I thought they’d be pleased to agree about
an gille ruaidh
here, aye?”

I laughed, and pulled a fold of blanket up around Jemmy’s ears.

“And I thought Brianna had
you
figured out!”

“So does she,” he said, with a grin. He bent suddenly and kissed me.

His mouth was soft and very warm. He tasted of bread and butter, and he smelled strongly of fresh leaves and unwashed male, with just the faintest trace of effluvium of diaper.

The wood around us was still, in the way of woods. No bird, no beast, just the sough of leaves above and the rush of water underfoot. Constant movement, constant sound—and at the center of it all, a perfect peace. There were a good many people on the mountain, and most of them not that far away—yet just here, just now, we might have been alone on Jupiter.

I opened my eyes and sighed, tasting honey. Jamie smiled at me, and brushed a fallen yellow leaf from my hair. The baby lay in my arms, a heavy, warm weight, the center of the universe.

Neither of us spoke, not wishing to disturb the stillness. It was like being at the tip of a spinning top, I thought—a whirl of events and people going on all round, and a step in one direction or another would plunge us back into that spinning frenzy, but here at the very center—there was peace.

I reached up and brushed a scatter of maple seeds from his shoulder. He seized my hand, and brought it to his mouth with a sudden fierceness that startled me. And yet his lips were tender, the tip of his tongue warm on the fleshy mound at the base of my thumb—the mount of Venus, it’s called, love’s seat.

He raised his head, and I felt the sudden chill on my hand, where the ancient scar showed white as bone. A letter “J,” cut in the skin, his mark on me.

He laid his hand against my face, and I pressed it there with my own, as though I could feel the faded “C” he bore on his own palm, against the cold skin of my cheek. Neither of us spoke, but the pledge was made, as we had made it once before, in a place of sanctuary, our feet on a scrap of bedrock in the shifting sands of threatened war.

It was not near; not yet. But I heard it coming, in the sound of drums and proclamation, saw it in the glint of steel, knew the fear of it in heart and bone when I looked in Jamie’s eyes.

The chill had gone, and hot blood throbbed in my hand as though to split the ancient scar and spill my heart’s blood for him once again. It would come, and I could not stop it.

But this time, I wouldn’t leave him. 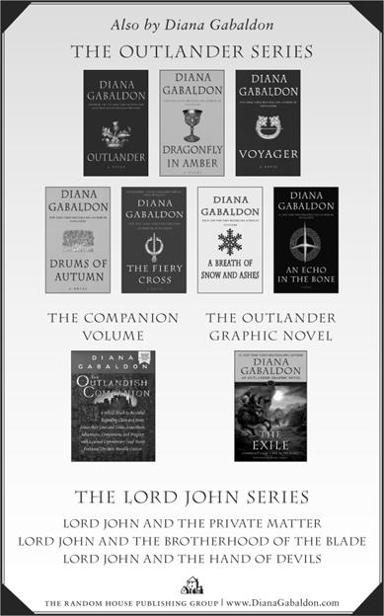 Excerpt from The Fiery Cross copyright © 2001 by Diana Gabaldon

No part of this book may be reproduced or transmitted in any form or by any means, electronic or mechanical, including photocopying, recording, or by any information storage and retrieval system, without the written permission of the publisher, except where permitted by law.