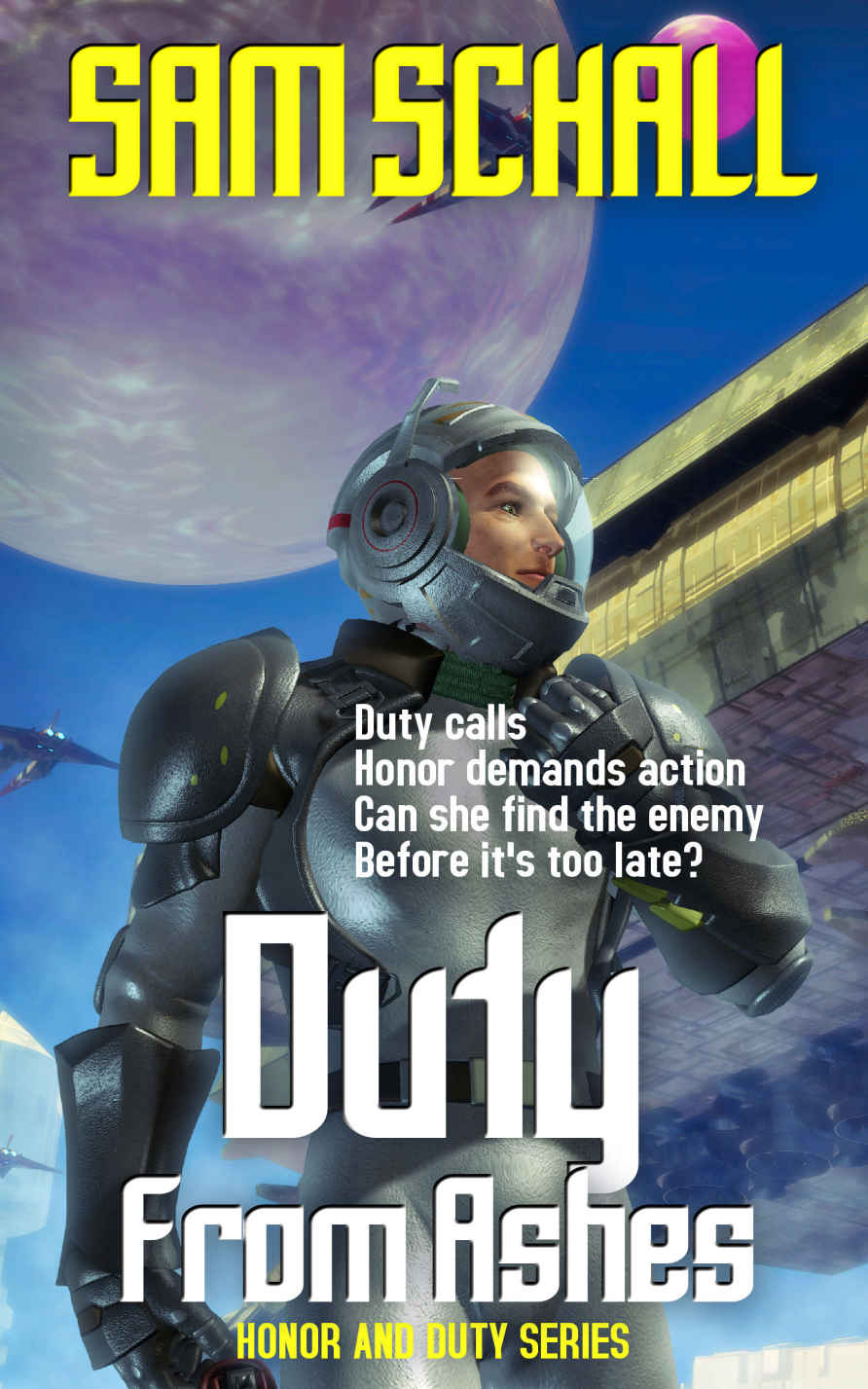 Cover design by Sarah A. Hoyt

If you enjoyed this novel, please check out
http://nocturnal-lives.com
for more titles.

To my son, who makes me proud every day of the week and who understands the true meaning of the words honor and duty.

S
MOKE
FILLED
THE
AIR
and the ground shook beneath her boots as another explosion sounded. It was close this time. Too close. Cursing, she ducked behind the makeshift barricade she and her team had erected outside the school and tried to catch her breath. As she did, the tell-tales from her battle armor warned that her heart was racing and her breathing was labored, not that she needed the onboard computer to confirm what she already knew. This was her worst nightmare come to life and, just like the last time, there had been no way to avoid it.

But she’d be damned if it ended the same way as before.

Carefully, she inched forward until she could see around the edge of the barricade. As she did, dirt and rock kicked up just inches from where she knelt as yet another round of enemy fire filled the air. Even as her team returned fire, she scanned the area, flipping through the various screens of her HUD. Then her lips pulled back in an almost feral smile.

Finally, she’d located the last of the areas where the enemy had dug in. Now it was time to show them just how foolish they’d been to think they could get the drop on her and her team.

“Boomer, two o’clock. The culvert near the edge of the first building.” Once again, she cycled through the various filters on her HUD, taking careful note of what each told her. “Scans show six bogies. Looks like one SAM and three unknown heavy weapons. We’ll give you cover fire so your team can move into position. Hold your fire until I give the order. We need to take those guns out before they decide to turn their attention to the school.”

“Hound, second target’s yours. Same building. Four stories up. Third window from the corner. I spotted at least one sniper.” She paused and scanned the area, looking for any indication the enemy had hostages with them. As much as she’d like to just level the building and be done with it, she couldn’t. Not if there were civilians inside and, knowing the Callusians, there would be. One of the first lessons they’d learned in the last war was that the enemy never hesitated to hide behind innocents. “I’m not picking up any other life signs in the immediate area but that doesn’t mean much. They could have hostages elsewhere in the building so remember your target zone.” She waited for his response, knowing he was calculating the best way to carry out her orders.

Her heart beat a little slower. So far, so good. Her team still had a chance to get out of this alive and, with a little luck, they would manage to save those civilians sheltering in the school and elsewhere.

Knowing their next move could mean victory or defeat, she called up the last data they had received on the enemy’s movements. As she studied it, her mind did the one thing she’d been fighting to avoid since the battle began. It went back to that terrible day more than two years earlier. She had been in this exact location, fighting this same battle. Only then she’d been given compromised intelligence. As a result, she and her squad, a different one from this time, had walked straight into a trap. So many had died. She and the six who had managed to make it back to the shuttle for extraction had been lucky to get out of there alive. At least that’s what she’d told herself. Of course, that had been before they were arrested, brought up on bogus charges, court martialed and sent to the Tarsus military prison.

Damn it! She couldn’t think about that. She couldn’t let the past distract her from what was happening right now. Not if she wanted her team to survive.

“We’re almost in position, Angel,” a voice reported over her comm a few moments later. Master Gunnery Sergeant Kevin “Loco” Talbot. Another asset, an invaluable one, and one she hadn’t had on that previous mission.

“Roger that, Loco. Let me know when you are.”

She paused, waiting to hear from the final team she’d sent out. As the seconds drew out into minutes that seemed like hours, her concern grew. She’d been forced to split her forces before with disastrous results. Was history repeating itself?

She licked her lips and fought the urge to message the last team. It was difficult, but she didn’t. Instead, she reminded herself that they needed to move slowly and carefully to avoid detection. At least she hadn’t heard anything from the direction they’d taken that might indicate they’d been discovered. Surely that had to be a good sign.

She closed her eyes and breathed deeply. Her emotions and doubts were running too high. She had to get them under control. This was her command, her mission. If she couldn’t hold it together, they would fail. But she couldn’t think about that. She couldn’t let herself be distracted by the dead, hers and the civilian lives that had been lost in that previous battle. This wasn’t the time to let distractions in.

Finally, just as she was about to give up and demand an update, her comm came to life.

“We’re in position, Angel. We have four bogies and we’re ready to paint them,” Captain Lucinda Ortega reported.

“Eagle, are you ready to paint your target?”

“Alpha Team, prepare to lay down cover fire. Boomer, the moment we do, you and your team haul ass and take out those heavy guns and that SAM.”

She nodded, not that the demolitions expert could see her, and drew a deep, steadying breath. A quick check of her battle rifle and she was ready. It was now or never. With a glance at the four Marines crouching behind the barricade with her, she snugged the butt of the rifle against her shoulder.

She leaned around the corner of the barricade and opened fire. Instantly, the sounds of weapons – battle rifles, railguns and more – filled the air. Three of the four teams laid down heavy fire to cover the fourth team as it moved into position. On her HUD, three small green lights moved quickly toward the target zone. So far, so good.

“Almost there,” Boomer’s voice said in her ear.

“Keep it up, Devil Dogs. Don’t give those bastards time to breathe, much less regroup.”

Boomer’s shout was the only warning they’d get. Instantly, she set her visor to block the flash from the explosion even as she kept firing. At least this time when the ground shook, it would be working for them instead of against them.

“Keep firing!” she ordered. “Eagle, Sorceress, stand ready. I repeat, stand ready. Paint the targets on my signal. Once the air strike begins, we move in.”

She waited, scanning the battlefield in front of her for any movement. Smoke and dust from the explosion filled the air. From the distance, she could hear the enemy. Some called for help. Some, those caught in the blast and not lucky enough to be granted a quick death, cried out for their mothers. A small part of her felt sorry for them. But another part, the soldier in her, knew it was either them or her and she much preferred living.

As she knelt there, ready to swing her rifle toward anyone who came her way, she imagined each member of her team wanting to look skyward, but keeping their eyes on the enemy locations, as they waited for the air support to come.

Air support that hadn’t come that first time. Would it now?

The voice coming over the battle-net was like an answer to her prayers. She relayed the message to the rest of her squad. As she did, she inched further around the edge of the barricade. Once in position, she raised one gloved fist, knowing the others were watching for her signal. Then she waited, knowing any number of things could still go horribly wrong and praying that they didn’t.

Moments later, the sounds of the fighter wing racing in their direction filled the air. The target, six heavy ground transports that had been moving closer and closer to the Devil Dogs, exploded into a wall of flames as the fighters dropped their payloads. Instinct and training had the Marines diving for cover, any cover, as shrapnel from the transports flew through the air. Screams from the enemy soldiers unlucky enough to be caught in the open followed. Then, before the screams died out, she gave the order to move in.

“Take out those snipers!” she yelled as she sprinted across the clearing in the direction of the school.

Damn it, this time she would save those innocent bystanders huddling inside.

Hound, moving at a speed no human could without the assistance of powered battle armor, leapt from where he’d been taking cover. The moment he landed, he turned and leveled the grenade launcher that was currently his armor’s primary weapon at the target. The building she had identified for him a few minutes earlier was soon missing part of its far side. Smoke billowed from the area where the sniper had been holed up. Someone would need a new office or apartment when this was all over. But, hopefully, they’d survived the fight and would be able to return home soon. Even as the thought came, she knew the truth could be far different. War was never clean, no matter what the politicians wanted. There was always the possibility of collateral damage, especially when the enemy had no compunctions about hiding behind a shield of innocents.

Origin by Jack Kilborn
Three-Ring Terror by Franklin W. Dixon
The Auditions by Stacy Gregg
Blood Dark by Lindsay J. Pryor
Sylvie by Jennifer Sattler
The Book of Daniel by Z. A. Maxfield
Dial H for Hitchcock by Susan Kandel
The Sweetest Dare by Leigh Ellwood
Malice On The Moors by Graham Thomas
Terrarium by Scott Russell Sanders