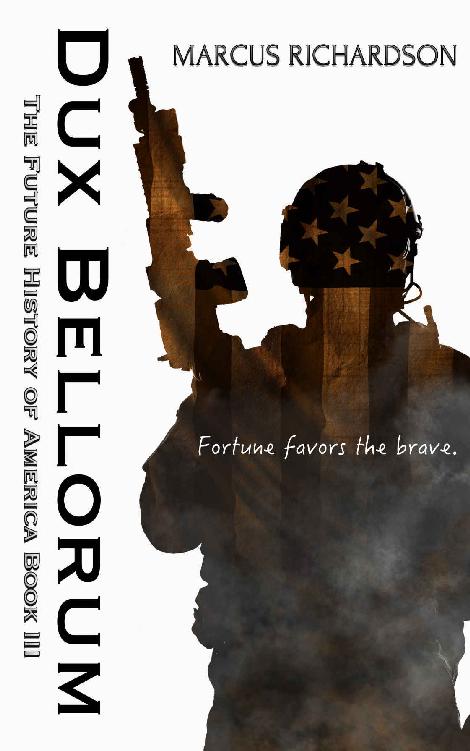 Chapter 2 - Flight of the Rebels

Chapter 6 - Time for a New Car

Chapter 15 - The Road to Dunham

Chapter 30 - All in the Family

Chapter 57 - On the Road Again

Chapter 60 - Death From Above

Chapter 77 - Something to Fight For

Chapter 78 - Something to Die For

The people and events in this book have been written

for entertainment purposes only.

Any similarity to living

and/or deceased people is purely coincidental and not intentional.

No part of this book may be reproduced or transmitted

in any form by any means, electronic or mechanical,

including photocopying, recording, or by any information

storage and retrieval system without prior written consent by the author.

Want to get an e-mail when my next book is released?

The Future History of America

Other Books in the Wildfire Saga

On loan from the Essex County Sheriff's Department, the quilted winter coat was warm, if small.

He squinted up at the darkening October sky and blinked as early-season snowflakes kissed his face.

He and his men had to find permanent shelter soon if they planned to survive the winter.

A place that would suit their needs and allow him to set up shop unmolested.

He'd led his men through the sleepy little town of Ticonderoga a few hours back.

They hadn't asked for anything, hadn't even done anything, but the people were afraid and standoffish.

No one offered to help or provide food or shelter.

He couldn't blame them, but he wasn't happy either.

Ungrateful is what it was—he'd held his little band together through fear and sheer willpower.

If he hadn't been there to keep everyone moving, the violence visited upon the little town of survivors would have been Biblical.

And how did they repay him?

An hour after they left town, the undersheriff showed up.

Ah well, at least his clothes fit me.

Better than the rags everyone else has.
He stretched his shoulders in the undersized jacket and continued shuffling along the road.

Gabriel's second-in-command knew when the boss was upset and kept the rest of their little army of escaped inmates back down the road.

That was good—Bondo was smarter than he looked. Evans needed to think in peace as he walked.

He pulled his right hand from the coat and plucked at the duty shirt stretched across his broad chest.

The old undersheriff had been a skinny little prick.

Ten years of hard time doing nothing but lifting weights and fighting every ethnic group imaginable had left Gabriel Evans with a body fit for any professional sport.

That huge body required food though—lots of it.

He pulled the brim of the undersheriff’s campaign hat over his brow to shield his eyes from the blowing snow.

He tromped through the dusting and hoped he would find something—
anything
—of use around the next bend.

The weight of the service revolver in its leather holster on his hip was comforting, but he only had one shot left.

The rest had been spent freeing his fellow captives and birthing his army.

As he walked, he risked a backward glance over his shoulder at the ragtag group behind him.

The ones he could trust wore the uniforms of the ill-fated prison guards assigned to their final transfer.

God, what a ragged-ass group.

York City was beyond him.

Things must have gotten real bad on the outside, is all Gabriel figured.

There was no way politicians would risk moving so many hardened criminals to one spot if they didn't know something.

Gabriel smiled as he watched his army shuffle along.

They knew something, all right.

They knew we'd break out sooner or later.

They tried to herd us all together.

The smile faded from his face.

Maybe they wanted to get rid of us all in one shot...

Regardless of the why, the bus he'd been on was part of a convoy that crashed on the slick roads leading south out of Upstate. Someone upstairs had been looking out for him when the bus driver hit that patch of black ice and lost control.

A few prisoners died on impact, most were injured and a few wriggled free of their restraints.

Maybe they
arranged
to have an accident with the bus so the warden could explain to everyone how it was so unfortunate the poor bastards had all perished.

But, look on the bright side, he'd say, there's 27 less mouths for the taxpayers to feed.

Twenty-seven more sick and twisted sons of bitches had gone to meet their maker in hell.

He choked the first guard that came to check on him—or finish him off—after the accident.

He was pretty sure he'd snapped the man's neck, but it didn't matter—he got his gun just the same and dropped the others with a few well-placed shots.

Out of ammo and on the run, they'd stumbled on Ticonderoga toward the end of the day, exhausted and running on fumes.

Evens knew from the first face he saw they'd get no help in that tiny town.

Some old bitch with a long dirty braid.

Should have hung her scrawny ass with that braid.

The people in town were half-starved, and it was clear from fear on their faces they wouldn't help anyone.

You didn’t offer to help, but you called the cops.

Evans tripped over a small rock in the road and caught himself against a tree that leaned in on the side of the road until the pain in his cramped feet subsided.

He stood there for a second, his hand on the cold, rough bark and held his tongue from the string of curses that longed to escape his lips.

If he was going to play the part of the undersheriff, walking around swearing like a sailor would not convince any civilians he was worthy of helping.