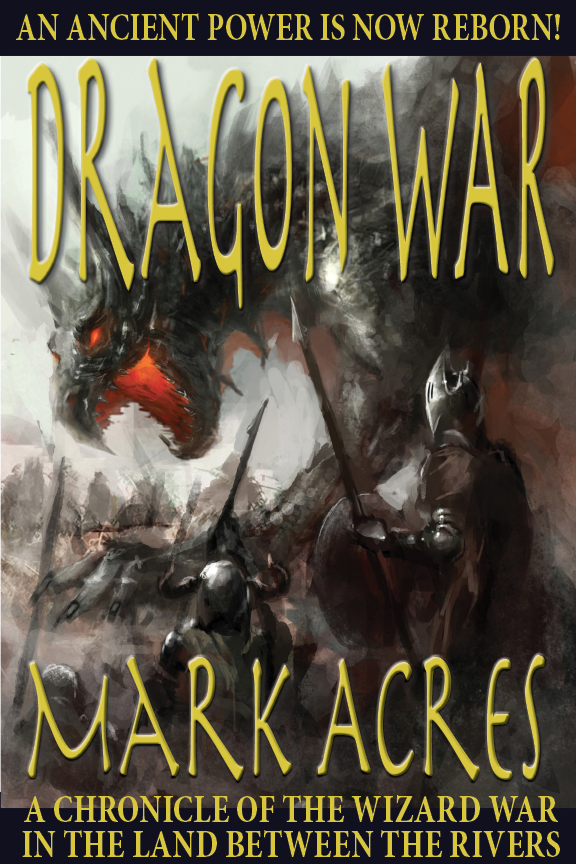 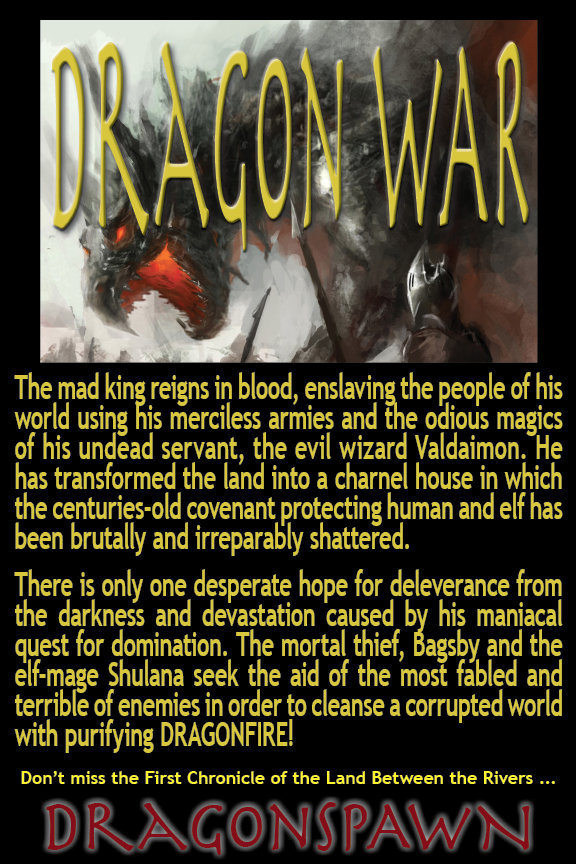 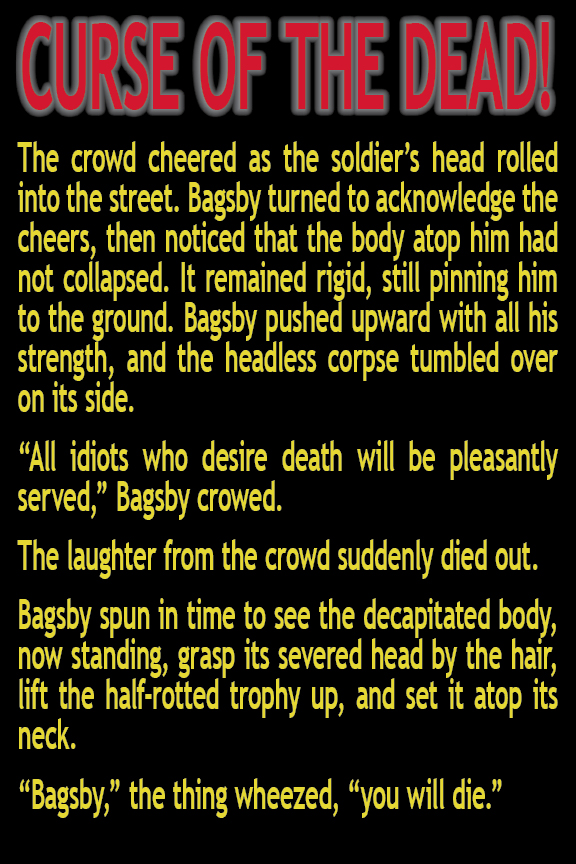 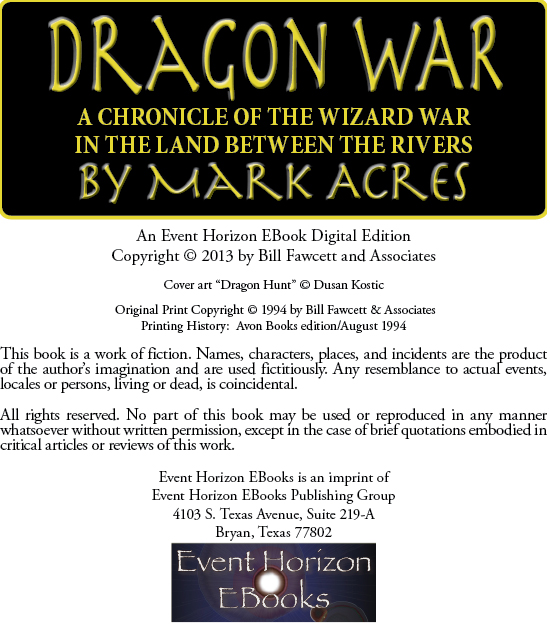 THE LONE WARRIOR
sat motionless on his white mount at the top of the grassy knoll, his ebony armor casting off sparks of brilliant white light as the first rays of the cold morning sun touched its carefully fluted plates. The toes of the black steel boots curved forward to sharp points; a kick from them could pierce a man’s flesh. Black greaves and leg plating covered the fighter to his waist, the metal seemingly flowing up his form in countless subtle twists and curves, accented by short, sharp steel spikes protruding forward from the knee joints. The same fluted black steel covered the abdomen and torso of the forbidding figure, with fine designs and jarring, jagged patterns raised from the smooth surface of the plates. The horse’s reins were held in the flexible black gauntlets that covered the fighter’s left hand. The warrior’s head was hidden in the recesses of a great helm, the beaver and bottom of which jutted forward sharply, giving the impression of the beak of a giant black bird of prey. Black, too, were the saddle, stirrups, bridle, and reins of the white horse. The only relief from the stark black-white contrast was the shock of brilliant red plumage that towered from the top of the helm, looking like an enormous spray of blood erupting toward the heavens.

The warrior gazed out on the plain that extended before him to the distant horizon—a grassy plain filled with the combined host of the Holy Alliance drawn up in full battle array. More than a hundred huge banners, over six feet on a side, snapped stiffly in the cold wind. A cacophony of colors assaulted the warrior’s hidden eyes, each colorful emblem competing with peers for precedence and glory. And the troops! Rank after rank of mounted knights, each armored more gloriously than the rank before it. Spear-points, lances, and upraised swords gleamed with armor in the early light, and the snorting, puffing and pawing of the countless horses was like a muffled thunder—how glorious would be the sound of the charge! There were footmen, too, in their countless thousands, the pawns, the senseless sacrifices, the grist for the mill of war: some professional mercenaries in their suits of chain mail half hidden behind their full length, narrow shields; some common peasants, armored and armed as best they could with spears and bills, wooden shields, and leather padding; some half naked savages, with nothing more than slings, stones, teeth, and nails with which to assault their hated foe.

To the rear of the enemy host, in a single thin line, mounted on the finest horses in all the kingdoms of the Holy Alliance, were the rulers of the Alliance lands: kings, princes, dukes, and earls—all sons of kings, with royal blood coursing quickly through their veins as the thrill and fear of the approaching battle quickened their various spirits. Golden crowns and shining silver coronets adorned their heads; behind each ruler’s horse, a richly dressed squire held lance and helm at the ready, should the noblest of the nobles decide to actually participate in the death struggle about to explode across the plain.

The lone warrior turned to face forward, directly toward the countless throng. His head lurched backward, and he laughed aloud—a slow, guttural, evil laugh that rumbled and rolled across the plain, assaulting the ears of every man assembled there. The neatly arrayed blocks of infantry flinched, their front ranks surging back several steps to collide with the masses to their rear. The ranks of knights began to lose cohesion as the warriors’ mounts reared and whinnied, turned and pawed the earth and, with tails tucked and teeth bared, implored their enraged masters to leave this place of impending death before the final peal of doom was tolled.

The lone warrior laughed all the harder at the discomfiture of the host. Then, with a sudden movement, he threw both arms upward and outward toward the white-gray sky, fingers fully extended. “Behold!” he cried, “the power of him whom you would conquer!”

Two tiny black dots appeared high in the white glare of the heavens, and from each emerged a stream of brilliant color hurtling earthward. The stunned host watched in silence as the small, mysterious balls of color plummeted earthward faster than any falling object, increasing in size and brilliance until...

“Fire! Fire! Fire!” The chant of fear was taken up by hundreds, then thousands, of voices. The masses of color revealed themselves to be great gouts of flame, propelled with unerring aim toward the very center of the assembled host, growing in size until, combined, they blocked out a full quarter of the sky itself.

The center columns broke as the heat of the falling flames first reached them. The thousands in their neat ranks and columns became a milling, roiling mass of armed, panicked animals, slashing, spearing, and trampling one another in their haste to fly from the flaming death that would inevitably consume them. Vainly did the line of kings and princes scream at their underlings to hold against the inhuman forces hurtling toward them. Desperately, they signaled their ranks of knights to charge—not at the lone warrior whom they had come to fight, but rather at their own men, the rear ranks of whom were already approaching the rulers with deadly intent, determined to eliminate anything that would make them stand and face the burning death.

A few bold knights galloped forward, lances leveled, and were lost to sight in the swirling mass an instant before the flames hit. Men and horses burst spontaneously into flames from the heat of the great blasts alone. Then the fires struck the earth with a hideous roar that drowned out the screams of men and beasts, and soon there was nothing to be seen but the fiery display that stretched out toward heaven itself, and reduced everything in its path to ash and molten ruin.

In the next instant, all was silence.

Where once had stood the countless footmen of the Holy Alliance host, there now was nothing but a vast, flat sea of black earth, scorched with heat so great that the bedrock, exposed in places, glowed red.

The kings gazed in silent horror at the burnt emptiness that moments before had been the assembled manpower of their realms. Now only the knights were left, and their lines, already in disarray, were weaving and snaking backward from the knoll where the lone warrior still sat, his arms motionless in extension to the sky.

“Now,” the warrior shouted into the stillness, his voice louder than even the roar of the flames had been, “let us nobles fight!” He lowered his arms. With his right hand, he drew from its scabbard a great, two-handed sword, its blade of gleaming obsidian traced about with the pulsing blue glow of powerful enchantment. This huge weapon he hefted above his head with his right hand, while his left gripped the reins of his charger. He gave a great shout, spurred his mount, and surged forward, the horse building speed rapidly to a full gallop.

The line of kings broke and fled, shouting instructions as they did for their knights to engage the foe. But their knights were no longer loyal subjects with stout hearts. They were frightened men, no less than the footmen they so despised. The knights galloped toward the rear, and for a moment it appeared the kings themselves would be trampled by their own fleeing nobles, so great was their haste to retreat.

The lone warrior prevented any such fate, for his steed was faster than any demon, and the rider was upon the mass of knights long before their merely mortal beasts could carry them to safety. Up and down the obsidian blade flashed, its magical blue fire obscured by gouts of blood as the lone warrior felled his foes three and four at a stroke. With a speed beyond comprehension, his mount carried him up and down through the length of the fleeing lines, and death, blood, and screams flowed in his constant wake. The pursuit and slaughter went on and on, yet never did the warrior’s arm tire or even hesitate. How many miles were covered in that race of death no man knew. In time, the knights were slain; then came the royal deaths. The kings died like all other men—some well, some not, but all with finality.

The lone warrior lopped off the last royal head, swung a heavy leg over one side of his mount, and leapt to the ground. He strode forward toward the one human figure remaining on the field of slaughter, one who had watched the entire battle in reverent silence. The warrior stopped directly in front of this man, sheathed his sword, and stood still, with his arms at his sides.

Sigurt, high priest of Wojan, the god of war, surveyed the silent form before him. The priest’s mind was blank; no thought disturbed the purely sensual process of visually studying this tyro. At length, the priest extended his hands gently toward the beaver of the warrior’s great helm. He grasped it, paused a moment, and then lifted it.

Deep within its recesses was an eyeless skull, covered in places with thick chunks of peeling, rotten flesh. The stench of rot filled Sigurt’s entire being; his gorge rose, and he feared he would be sick.

Then a cold shock, like sudden death itself, surged through Sigurt’s body. A voice that he heard only in his mind said quietly, “Heal him. But make him pay the price.”

Sigurt awoke sitting bolt upright, his body rigid. Instantly, his years of self-training came to his aid. Reflexively, he inhaled deeply, then expelled the breath slowly while his locked muscles gradually relaxed. He shook his head violently from side to side for a second, as if physically shaking the last of the dream images from his mind. Then he breathed deeply again, allowing the thick, scented smoke of burning incense that always filled his Chamber of Visions to eradicate the memory of the stench at the end of his dream.

“Master...?” A quiet voice timidly sounded from the dark recesses of the chamber, which was lit by a single, sputtering torch.

“Prepare the temple for a ceremony of healing. It will require the ful compliment of our priesthood,” Sigurt replied, not bothering to look at the humble acolyte who guarded his vision-sleep. “Wojan has spoken to me.”

The Chateau by William Maxwell
The Exciting Life by Karen Mason
Middle Passage by Charles Johnson
The Unkindest Cut by Gerald Hammond
Children of the Albatross by Anaïs Nin
The Unburied by Charles Palliser
Good Home Cookin': A Novel of Horror by Christian Burch
Shev by Tracey Devlyn
The Golden One by Elizabeth Peters
Waltz of Shadows by Joe R. Lansdale, Mark A. Nelson