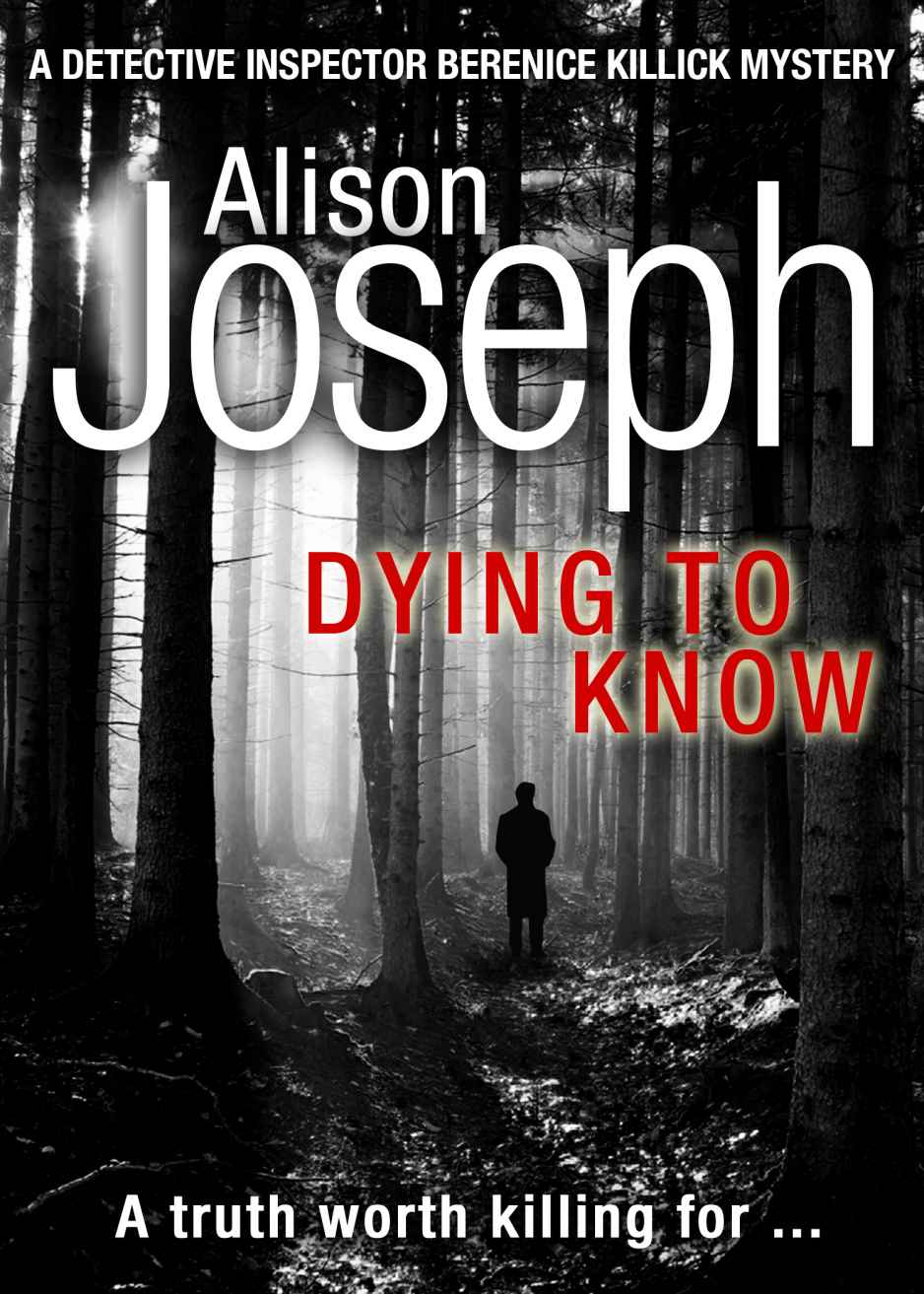 Alison Joseph has asserted her rights under the Copyright, Design and Patents Act, 1988, to be identified as the author of this work.

It is the end of the story.

She
imagined him on the beach, pacing out the last moments of his life. She thought about him climbing, somewhere high up, up on the cliffs along the coast. Standing, on the top, gazing out to sea. Breathing. Jumping. Falling. One, two, three seconds. And then you hit the water.

Water
in the lungs, they’re saying.

Which
means, still breathing. For a while, anyway.

And
now, here, washed up, a silent twisted heap in the midst of noise, the wind across the beach, the crackle of police radios, the flap of blue and white tape in the breeze.

‘Berenice.
What you thinking, Boss?’

She
blinked. ‘Oh. Mary.’ She looked across the shingle that sparkled in the sunlight. ‘I was thinking…’

‘Usually
it’s the high points near Folkestone that wash up this way.’

‘But
wanting to die…’

‘You
always ask those questions.’

Berenice
gave a brief smile. ‘Do we know who he is?’

‘Someone
will have missed him,’ Berenice said.

‘He’s
been in the water at least twenty four hours, they reckon,’ Mary said. ‘He’s what, forty odd? Well dressed, at least he was till those crabs fancied a bite of Harris Tweed…’

‘No
one just disappears these days.’ Berenice said. She held out her hands in their blue latex gloves. ‘The SOCO gave me these. He said, seeing as I was the investigating officer…’

‘Look.’
Berenice held a see-through plastic envelope up to the light. ‘Stuff from his pockets.’

‘No
ID?’ Mary took the envelope.

Berenice
shook her head. ‘We should get back to HQ.’

‘“… whence is it that the sun and planets gravitate towards one another without dense matter between them?”’

Mary was peering at the envelope. ‘That’s what it says here. Writings.’

Berenice
stared, read the words. ‘Clever bloke, then. It’s always the brainy ones. Do you remember that poor man in Wetherby? Wrote out a ground-breaking formula for a new TB drug and then blew out his brains?’

‘We
were still Yorkshire-women then.’ Mary turned towards the cars.

‘Perhaps
we are still.’ Berenice fell into step beside her.

‘You
mean, you can take the girl out of Yorkshire…’ Mary smiled.

‘Something
like that.’ The pebbles shifted under their feet. The sea had withdrawn into quiet, distant waves, as if to declare itself incapable of killing.

Further inland, beside the pale ribbon of the Hythe road, stands a haphazard arrangement of concrete buildings, which make up the East Kent Lepton Research Institute. Here, in a swish of automatic doors, Liam Phelps, physicist, walks into the control room.

‘Elizabeth.
You called?’ In the wide, bright room there were banks of screens. At one of them sat a woman, in crisp shirt and trousers, her pale brown hair tied back.

‘Where
is he?’ She looked up from her screen. ‘It’s not like him to disappear.’

‘Murdo?
Perhaps he went for one of his walks.’

‘He
can’t have done. Not today. Have you seen this?’

He
leaned on the nearest desk, one arm on her chair. She sat, smart, upright and nervous. He stared at the data in front of him. Two lines, one red, one blue. ‘Full beam – ’ he began to say.

‘No,
Liam, look. Look at the chart for the last half hour.’

He
stared some more. ‘But these can’t be B-mesons…’

‘The
same as yesterday?’

‘And
the day before,’ she said. ‘Something weird’s going on. That new pattern - these collisions…’

He
leaned towards the screen. ‘Did you check luminosity – what about charge errors?’

‘We’ve
checked. Look.’ She pulled up a screen, scrolled down it. ‘Everything’s clear. We’ve checked and checked. The results don’t make sense.’ Her voice was soft, with a trace of an American accent.

Liam
looked at her. ‘And Murdo’s missing.’

He
turned to go. ‘We’d better call a meeting about these results. Just us five. And the director. OK?

She
reached up and touched his sleeve. ‘Liam – what about Murdo? It’s not like him to disappear.’

‘Maguire?
I’ll keep trying his mobile,’ he said. ‘Unless you want to?’

The
screens murmured their gentle beeping, and her gaze travelled back to the graphs in front of her. ‘Perhaps we should phone the police,’ she said.

She
gave a thin smile. ‘I meant, Murdo.’

‘Although
I guess they’re tired of hearing from us.’

‘A
broken window is different from a missing man,’ he said. ‘Even if it was a deliberate attack on this building.’

‘Three
nights running? And what about the hate mail?’ he said.

‘Superstition.
Or Sci Fi heads. Anyway, Richard has got security guys at both entrances now.’

He
glanced down at her. ‘I’ll be back,’ he said. He turned back to her. ‘No one else must know about this. Only the team. Understood?’

She
nodded, her gaze fixed on the screen.

She
got out her phone, called up his number. Murdo Maguire. Her finger hesitated over the name. She clicked it off. In front of her the red and blue lines lurched upwards, crashed downwards.

DI Berenice Killick splashed water on her face. Her face in the mirror stared back. She ran a finger through her long black hair extensions.

It
is my case, she thought. A man washed up on the beach, with no ID but his pockets full of weird writings about gravity. I should be in charge.

Had
she imagined it, she wondered. That sneer from the SIO on their return, Detective Chief Inspector Stuart Coles, ‘Well, Miss Killick, there’s no point asking me where he might have fallen from… of course, a little local knowledge might come in very handy at this point…’

Something
about the word ‘local’. A tone of voice…

The
door creaked open. ‘Thought I’d find you here,’ Mary said. ‘We’ve had a call from Hythe. Missing person. Physicist, works at the lab there. Murdo Maguire, aged 43, white, grey-haired, blue eyes, not been seen for a couple of days. Not out of character, they said, but they were worried about him. He’s got a wife up the coast here.’

‘His
car’s been found too,’ Mary said, ‘abandoned on the Hythe Road, right by that old lighthouse there. Looks like he drove there with the intent of climbing that tower.’

Mary
shrugged. ‘Who knows. Anyway, Stuart said, as we know who it is, you and I can go back on the warehouse raid case for now. He wants us to follow up the number-plate sightings.’

‘Doesn’t
that need local knowledge too?’

‘I
didn’t just imagine it, then?’ Berenice sighed. ‘Is it the Yorkshire bit he doesn’t like? Or the women bit? Like he would prefer it if everyone was Kentish, male and white?’

‘You don’t regret the move, do you?’ Mary glanced at herself in the mirror. She was wearing a neutral navy suit, and bright red shoes.

Berenice
shook her head. ‘You know my reasons for coming south.’ She took a lip-gloss out of her bag. ‘Physicist?’ she said. ‘Explains that stuff in his pocket about matter and thing. Funny the fish didn’t eat that too.’

‘Nah,
too clever for fish.’

Berenice
studied her reflection. Mary met her eyes in the mirror. ‘You’re thinking about Him, aren’t you? Talking of reasons for leaving Yorkshire. Like, how would his wife react if some DC turned up on her doorstep in Leeds – ’

‘I
wasn’t actually.’ Her voice was sharp. ‘I was thinking about these extensions? I mean, really honestly, I know you said you liked them but maybe a short Afro is best for a new DI.’

‘Berenice,
would I lie to you?’

‘Listen,
Boss, I had blonde extensions all last year and I didn’t look like white trash, did I?’

‘I
never said trash.’ Berenice turned away from the mirror. ‘And as far as “Him” is concerned, drowning’s too good for him.’

‘You
know the physicist’s wife didn’t report him missing. Weird eh? He’d been gone two days and a night.’

Berenice
shrugged. ‘As far as I’m concerned, nothing’s weird between man and wife. Come on. Let’s go and talk to that villain about the warehouse stuff. While we’ve got time.’

‘Well,
there’s a dead physicist in the fridge. God knows what that’s going to do to the universe.’

‘
What
is
there
in
places
almost
empty
of
matter
,
and
whence
is
it
that
the
sun
and
planets
gravitate
towards
one
another
without
dense
matter
between
them
?
’

The Divine Whisper by Rebekah Daniels
Whiteout by Ken Follett
Baltimore Chronicles by Treasure Hernandez
The Moonlight Mistress by Victoria Janssen
El arqueólogo by Martí Gironell
Holy Island Trilogy 03 - The Final Countdown by Sheila Quigley
Every Bitter Thing by Leighton Gage
On Writing Romance by Leigh Michaels
The Book of Secrets by Fiona Kidman
The Genesis Project Prophecy of the Seven by C.L. De Leon