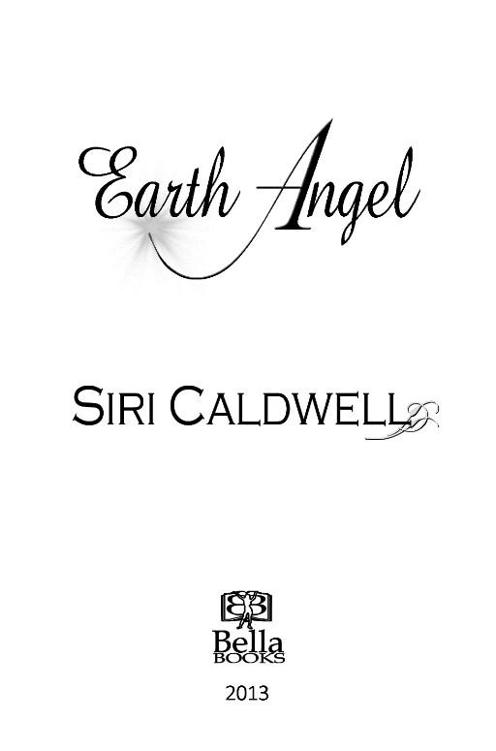 Siri Caldwell got her start in creative writing in high school writing notes from her parents explaining why she was absent. She has been a health journalist, hydrogeologist, yoga teacher and massage therapist. She lives with her partner outside Washington, DC.

Other Bella Books by Siri Caldwell

Thank you to Alexandra and Ric for discussions on angelic incarnation, to Krista for Reiki-ing the car, to Cynthy for information on harp therapy, and to Jennifer for everything.

Thank you to Karin Kallmaker for her enthusiasm, to Katherine V. Forrest for her clear-eyed editorial input, to Sandy Knowles for the beautiful cover art, and to everyone else at Bella Books who helped bring this book to life.

With a joyful laugh, the angel plummeted through the vast, singing void of space. She hurtled toward earth, her trajectory guided by a structure built eons ago using the technology of an extinct, alien race. Starlight blazed and vanished; galaxies spun.

Out of the corner of her eye, something caught her attention. Something subtly off. She slowed to a stop and reversed course, scanning for the source of wrongness.

There it was. She drifted closer to look. What was that? Not a…

She faded to a dim glow as she inched even closer. Not…

A fissure. Its edges shimmered with mathematical probabilities. Frayed threads on the verge of snapping sang dangerously off-key.

The angel shrank back. She’d seen this before.

And she’d hoped to never see it again.

Gwynne Abernathy had never seen so many angels in one room.

She sat at the end of the hospital bed massaging her mother’s feet, willing her to wake from her coma. Gwynne’s father sat nearby, holding her mother’s hand, acting like it hadn’t been years since their divorce. Maybe he’d come for Heather, her little sister. But Heather was already dead.

Her mother still had a chance, although her life force was so dim it was hard to believe anything could help her. Hard to believe, but not impossible. Not for Gwynne. She was good at this. With nothing more than a silent intention and occasionally an angel’s help, she could manipulate energy currents and channel healing life energy into someone to stop a panic attack, lower high blood pressure, speed the healing of broken bones, ease the pain of cancer.

She could bring her back.

And, with or without her, so could the angels who floated around the room and crammed themselves into every available square inch of space as more and more angels continued to arrive. But not a single one laid her weightless, insubstantial hands on her mother to gift her with angelic healing light.

They wouldn’t even try. They almost always helped with Gwynne’s clients, but now, when it wasn’t a stranger but her own mother…

“Why won’t you help?” she whispered, her voice strangled from the effort to keep quiet. Generally she tried not to speak to angels in public, but right now she didn’t care. She was doing her best, dredging her memory for every technique she’d ever learned and even those she’d forgotten, but her best was nothing compared to what an angel could do. What were they waiting for? If anyone deserved a miracle, it was her mother, and she was not going to give up until she got her one.

“Talking to your angel friends?” her father asked. He sounded exhausted. “Your mother always enjoyed listening to the stories you and your sister came up with. She loved that you had such vivid imaginations.”

“She’s not dead yet,” Gwynne said. He didn’t have to talk about her like she was already gone.

“I’m going to get coffee,” he said, too much of a gentleman to argue. He pushed up wearily from his plastic chair. “Want any?”

He kissed his ex-wife’s forehead with the same defeated gentleness he always had around her since the divorce, then lumbered out, forgetting to close the door behind him.

“You’re not allowed back here,” said the doctor standing in Abby Vogel’s path, blocking her from entering the intensive care wing. “Medical personnel only.”

“No, you don’t.” The doctor took full advantage of Abby’s petite stature to stare her down. She pointed to the travel-size harp strapped to Abby’s chest like both she and her harp were dangerous viruses. “Get out.”

Abby was pretty sure her hospital ID was buried in a pile of dirty clothes on her bedroom floor, still clipped to last week’s shirt. “The nurses know me.”

“I don’t have time for this.” The doctor hurried off, grabbing the first nurse she passed and raising her voice above the dull roar of beeping medical machinery and overlapping conversations. “Get that girl out of here.”

The nurse glanced in Abby’s direction as the doctor disappeared behind a curtained alcove.

“Abby.” The nurse came over. “It’s probably best if you skip the ICU today and go straight to the third floor. I wish…” She darted a glance over her shoulder, then checked over the other shoulder, clearly nervous. “I love your music, but it’s probably better if you leave. She kills anyone who breaks her focus. Unless…”

Abby held her breath, hoping she could stay. The nurse looked around again, then motioned for Abby to follow her.

“Let’s set you up at the far end. Maybe she won’t notice you back there.”

In the far corner of the ICU, Abby pulled up a chair at the bedside of a colorless old woman hooked up to a tangle of machines. The machines emitted a whining mechanical hum punctuated by incessant beeping that would prevent anyone from resting. She positioned her lap harp between her thighs and leaned the instrument against her chest. The beeping was a shrill B-flat. She picked out that note and gradually wove it into an improvised melody, taking that B-flat and changing it from a dissonant aggravation to part of the music.

She played the lullaby again, more slowly, matching the rate of the ventilator, watching the rise and fall of the patient’s chest slow as the music helped her stop fighting the ventilator and wearing herself out.

Abby loved her little 27-string, seven-pound harp. It had a comforting, mellow tone that was perfect for hospital patients whose nerves might be jangled by a more tightly strung harp, and with it she changed respiration rates, she calmed frightened heartbeats, she created healthy rhythms in damaged tissues full of pain and chaos. All with music.

She let the last note linger and rose to leave.

“That music is so calming,” said a passing nurse, one she didn’t know well.

“Do you have anyone in particular you’d like me to play for?”

“Room 304 would be good. The doctor’s threatening to sedate that man if he doesn’t stop pulling out his IV. Other than that, take your pick.”

The patient in Room 304 was not happy to see her. He tried to rise from his bed but only made it a few inches before he collapsed.

“I’m not dying yet,” he bellowed from beneath his white sheets. “I don’t need no angel here.”

Ah, yes, the joke that never got old, that seemed witty and original to every patient who came up with it. Angels and harps. She supposed she should be happy it wasn’t something worse.

“Goddamn nurses are holding me prisoner here. Help me escape.”

“They’re trying to help you get well.”

“They’re poisoning me is what they’re doing. See this here contraption?” He fumbled ineffectively with the intravenous drip taped to his arm. “Poison. Keeps me weak so I don’t fly the coop.”

It had to be scary to not feel like yourself, but telling him so probably wouldn’t help. “Would you like some music?”

The patient let loose with a string of violent curses. She could see why the doctor wanted to sedate him. Medical personnel didn’t get paid enough to deal with people like this.

Channeling peace and calm through her music, Abby plucked the harp strings as softly as she could so he’d have to quiet down to hear her. It wasn’t long before his accusations fizzled out and he closed his eyes and fell asleep.

She played awhile longer, then left her sleeping patient and made her way down the antiseptic-smelling hallway of the hospital’s third floor, her harp supported on a wide strap slung across her back. At the far end of the hallway, a ball of yellow-white sunlight the size of a soap bubble floated through the bank of glass windows. It oriented itself, blazed like fire, and zipped past, all the way down the hall. Abby looked over her shoulder and the light zipped past her once again before it returned and settled at her side.

“Where to?” Abby asked. She didn’t care who she performed for, and the nurses gave her free rein, but Sapphire, her favorite ball of light, liked to pick the rooms for her.

She wasn’t quite sure what Sapphire was. An angel, she liked to think, but she had no way of knowing whether anyone else would agree. Since no one else—not even the few psychics she’d talked to over the years—could see or hear her otherworldly best friend, it was kind of impossible to compare notes. Sometimes she wondered if it might be more accurate to call her an alien life-form—or maybe, possibly, a figment of her imagination—but Sapphire called herself an angel, and that was good enough.

Sapphire floated down the hall and stopped in front of Room 311. The door was open. Abby peeked in. The room was blindingly bright, crammed wing to wing with angels. Or…whatever. Aliens. Figments. Imaginary photons. Take your pick. She cupped her hand over her forehead like a visor and squinted. A hospital visitor sat hunched in a flimsy chair with her head in her hands, her elbows on her knees, at the foot of the bed of an apparently unconscious patient. A forest-green chamois shirt was draped over the back of the chair and an empty paper coffee cup sat at the visitor’s feet. Why were so many angels in the room? It wasn’t unusual to encounter other angels at the hospital, especially at the bedside of dying patients, but this was the biggest crowd she’d ever seen. Generally a single angel was enough to ease a patient’s fears, so they tended to spread out, one to a room. But not this time. No wonder Sapphire led her here—she wanted to hang out with her friends.

Abby wavered outside the door as Sapphire morphed from a ball of light into more traditional winged angelic form and mingled with the others. The woman in the chair didn’t move—showed no sign of having noticed Abby’s presence at the door—so Abby raised her hand to knock.

“Go away,” pleaded the woman.

Abby jerked back, startled, before she could knock. “Sorry.”

The woman whipped her head in Abby’s direction. She was about her own age, with a face that was too angular to be feminine but too fascinating to be a man’s. Her chestnut-brown hair was cut short and pixie-like and was plastered haphazardly to her head like she hadn’t slept in a long time, and her limp white T-shirt and jeans looked like she’d been wearing the same clothes for days.