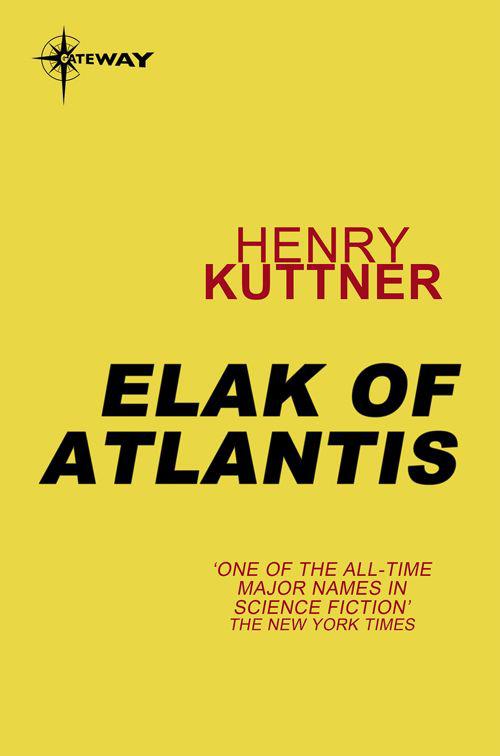 Thunder in the Dawn

The Spawn of Dagon

Cursed be the City

The Citadel of Darkness

H
ENRY
K
UTTNER IS
something of
an unsung hero of science fiction and fantasy, and to some extent, horror fiction, if for no other reason than he wrote a classic little booger tale called “The Graveyard Rats.”

He was a witty, fast-writing kind of guy who could come up with a story at the drop of a hat, and maybe have it finished before the hat hit the floor. Perhaps had he lived longer, and not been knocked dead by a heart attack in his forties, he would be better known, and perhaps if his novels, written by himself and in collaboration, had elicited the same impact his short stories received, he might also have a greater reputation with the mainstream. Within the field of the fantastic, and the science fictional, he is better known, and among certain aficionados of his work, he is considered to be as important a writer as almost anyone who ever wrote in the field(s).

Another reason he is not as well known as he ought to be is because he was so versatile. Unlike one of his protégés, Ray Bradbury, he never developed a singular voice by which he could be identified immediately. This is not to say he wasn’t stylistic. He was, and the echoes of his style can be seen in the works of Ray Bradbury, but unlike Bradbury, who worked to codify his approach to story, Kuttner did not.

To make matters even more confusing, he wrote under a number of different pen names, and if that isn’t enough, when he married C. L. Moore, another wonderful writer, the two of them worked together on almost all stories thereafter. It might even be said that if Henry Kuttner is unknown, so is C. L. Moore, because in a way, they became the same person, a writer(s) who wrote stories and used a lot of names to hide behind. They had to. They were producing a lot of stories for a lot of different markets and needed different names and different voices. They were like spies, moving from one country to another with falsified passports.

They worked together
on stories so closely that if one got up to go to the bathroom, the other could sit down and take their place and pick up where they left off, seamlessly producing prose until replaced once again by the other.

It was said C. L. Moore provided the romanticism to some of their best stories, and you can see this touch in her solo work. It was also said that Kuttner provided the wit and the ideas, and there is evidence of that.

Still, I’ve always found this to be an easy answer, and a little too pat. The true answer, especially since they were so interchangeable, is that they were both extraordinarily talented writers who found one another and together fell into a wonderful creative groove. It must have been one hell of a bonding; my guess is they could both be witty and romantic and exploding with ideas. The fact that writing was their profession and they needed to eat and pay bills didn’t hurt either. That’s a real incentive. But that need is not enough to explain the incredible ingenuity with which they worked, the sparkling style they created, and the lasting impact these stories have had on so many readers.

Perhaps, had they written alone, they might have produced better work individually than together, but it is hard to imagine better stories than those accredited to their pen names; these stories are some of the classics in the field of science fiction and science fantasy. To confuse this even more, some of their more famous pen names—Lewis Padgett and Lawrence O’Donnell come to mind—were sometimes the solo work of one or the other. Trying to decipher it all makes the head hurt.

Kuttner’s work, or the work attributed to him more than C. L. Moore, has been the source for a few films, the earliest being, I believe, “The Twonky,” which was done for television. One of his (and her?) best stories, “Vintage Season,” was filmed interestingly, and most recently, “Mimsy Were The Borogroves” was filmed as
The Last Mimsy
. This is probably Kuttner’s most famous story. The results were mixed. It was a movie that couldn’t quite decide if it was a serious science fiction film or something for the young adult viewer alone. But the premise and the general storyline were all Kuttner (or at least all Lewis Padgett), and that’s what the viewers take away with them when they leave the theater; that haunting idea so marvelously expressed in the original short story, and so proven in everyday life by anyone old enough to have trouble with the DVD player or the cell phone, only to have their eight-year-old kid show them how it works. I won’t say more. I hope your curiosity will invite you to read the original story, and afterward, to watch the film.

The bottom line
is this: Kuttner was one talented dude, and his stories move through the stories of a lot of writers writing today (I am one), and they will move through writers of the future as well; as long as there is the written word and there are heralds to proclaim his excellence, his stories will have their impact.

But this introduction and this book are a kind of herald. We want to alert you to his genius. This is just a taste. This is just one side of Kuttner. His work is being discovered and rediscovered a lot lately; there have been encouraging signs of this in the films and new editions of his short stories, examples of the latter being
Two Handed Engine
and this fine collection of early sword and sorcery stories. But neither of these volumes touches the bulk of Kuttner’s output. I hope these films and collections lead to a thunderous awareness for all things Kuttner, but I’m not holding my breath.

Readers and writers these days find it hard to invest time into reading anything older than a year or two, but let me tell you (and I pause to wag my finger and say shame on you), Kuttner still reads well and his stories are unique, and many ideas that are just now being explored by writers of science fiction and fantasy… well, sorry, Kuttner has already been there and he most likely did it better.

For many writers who are just drawing their swords, and are interested in what went before and how certain writers developed, or for that matter how certain genres developed, look here, for you can see how Kuttner began sharpening his literary sword, and what better way to symbolize this sharpening, than with tales of swords… and, of course, sorcery.

But more to the stories at hand.

Early in his career,
before meeting Catherine (better known in the pages of magazines as C. L.) Moore, he wrote for
Weird Tales
. Not only did he write the classic horror story “The Graveyard Rats”—also filmed, badly, for the TV film
Trilogy of Terror 2—
he soon wrote a series of sword and sorcery stories, influenced by Howard’s marvelous Conan tales, but quite different because they came from the mind of another highly original writer.

Kuttner’s creation, Elak, was his own thing, and not Howard’s Conan, but they certainly were characters who might have crossed paths and gone on a three-day drunk and whoring expedition together. In the end, that ramble might have led to a savage duel due to the fact that they were both in their own way what today would be described as alpha males. There was also the fact that Elak had a fat, drunken, friend, Lycon, who always traveled with him, and whose smart mouth and attitude might have stirred the pot and led to a savage decision made in blood.

It would have been Elak’s skillful swordsmanship against Conan’s brawn and fearless assault. It might have made for an interesting fight.

Kuttner’s stories, unlike the tales written by Howard, have a sense of humor. This is not to say there wasn’t a note of humor in Howard’s work, but it certainly wasn’t an identifying trait, and sometimes those notes were played quietly and without great success. Outside of sword and sorcery, Howard did write a series of western tall tales that had a bit of the Pecos Bill humor about them, but they were never, at least for me, that successful. The humor seemed heavy and contrived, and though many scholars point to these stories as a sign of Howard’s maturity as a writer, I always felt they were stories of the moment, of their time, and that the humor was as heavy as a rain cloud and twice as wet.

Kuttner understood humor, both
the subtle sort and the more blatant, and unlike Howard, he was really good at it. Also unlike Howard, and more akin to Leiber, there’s a playfulness about the prose and the descriptions; everything isn’t so deadly dark and serious, though Kuttner could certainly summon up the shadows when he chose, and he could write some of the bloodiest and most exciting adventure scenes ever conjured by a writer’s mind, as you will see when you read these stories.

I even think it’s telling that Elak uses a rapier, and not a big heavy sword. The rapier suits his personality, which is, at least by comparison to, say, Conan, somewhat dapper. Still, Elak has a kind of confidence and force of will that would have made John Wayne move back a step.