Read Eating Fire: My Life as a Lesbian Avenger Online

Eating Fire: My Life as a Lesbian Avenger 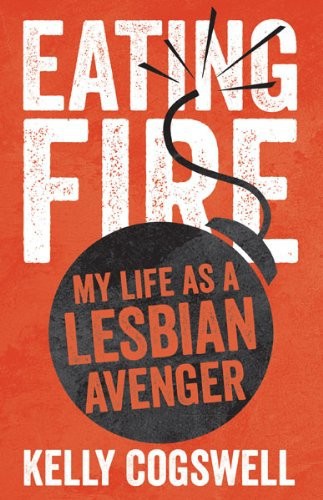 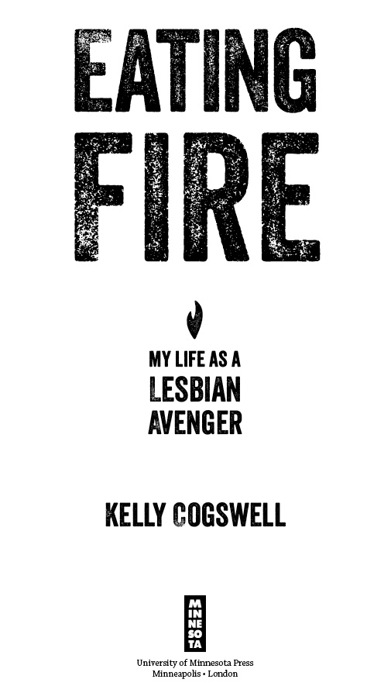 Portions of “A Laboratory of Identity” previously appeared as Kelly Cogswell, “Herstory Live: The Lesbian Avengers School You on Their Ass-Kicking Roots,”
http://www.autostraddle.com
, October 12, 2012.

All rights reserved. No part of this publication may be reproduced, stored in a retrieval system, or transmitted, in any form or by any means, electronic, mechanical, photocopying, recording, or otherwise, without the prior written permission of the publisher.

Published by the University of Minnesota Press

The University of Minnesota is an equal-opportunity educator and employer.

III. A Laboratory of Identity

IV. Vivas to Those Who Have Failed

Unscrew the locks from the doors!

Unscrew the doors themselves from their jambs!

In 1992, when the Lesbian Avengers started, I was living in a loft on Avenue B with my ex-girlfriend Amy, and her roommate, Rennes, who would pick up closeted fags and have noisy, slurpy sex. I shouldn’t complain. He’d agreed to let me live there for cheap, the broke poet with some weird disease that had me crying out with feverish dreams, disrupting his postcoital sleep. Drag queens had been there first, and it took days for me and Amy to clean the eye shadow ground into the bathroom grout. Above us was our tequila-soaked landlady whose overflowing Jacuzzi sometimes came through our ceiling. Below us were a pit bull, a large iguana, and two tattooed musician dykes. And on the ground floor, the Tu Casa recording studio and rehearsal space that gave all our lives the same irregular 4/4 beat.

Every Saturday night, the pioneering Korean deli owners across the street would shout, “Call the police, call the police!” And every Saturday night, one of us would call 911 and wait for the blue and white to turn up, siren blaring, cops laconic as a crackhead ran down the street with the till. Every block had two or three gaps where buildings had burnt to the ground. In between, in grimy graffitied buildings lived poor Latino families sprinkled with an assortment of artists and queers. Once, Rennes organized a brunch and I ended up making pancakes for some elderly British neighbor in a broad-brimmed hat and purple cloak that he introduced as Quentin Crisp.

A couple blocks north, in the rapidly gentrifying East Village, was Tompkins Square Park with its dealers and drummers. In the summer, it hosted the likes of Wigstock, Lady Bunny, and every wannabe beatnik in the world. At all times, it held the homeless, along with a full complement of squirrels, other rodents, and dogs. My friend Kathryn lived up at the northeastern edge in a basement apartment. I’d visit at night, scurrying past the rats when she didn’t have a late shift waitressing or a gig with her band. I saw her once at CBGB’s, thin and energetic on her traps, but she played guitar, too, and wrote her own stuff. She’d give me a couple puffs off her weed, and we’d talk about all our failures with girls, then sometimes mess around with her instruments. For a while we called ourselves The Sextets, randomly picking poems from a volume of Anne Sexton with me wailing the lyrics and thunking away on the bass, and Kathryn playing guitar. We never tried to get any shows, and only had one witness that whole time, but it made us happy. We weren’t afraid yet of squandering our lives and dying poor, alone, in the crappiest hospitals reserved for the uninsured.

I think we met at an action for ILGO, the Irish Lesbian and Gay Organization, though she’s about as Irish as I am, meaning hardly at all. She went because of an Irish ex. I went because of Marie Honan, an Irish girl I met when I was temping at Philip Morris. She had leopard-print glasses and a handbag big as a kitchen sink. Marie lived in Brooklyn then, with Anne Maguire, her girlfriend, and for a couple of years I followed them around like a barely housebroken pup. They were the first lesbian couple I ever knew, cool, smart, pretty, and composed, even under a fire of beer cans and garbage that we’d caught along with Mayor Dinkins when we walked for the first and only time as out Irish queers in the St. Patrick’s Day Parade. I adored them both, tried to be them, really, the way I’d tried to be my oldest sister trailing around in her T-shirts that dropped to my knees. I bummed cigarettes, borrowed clothes and accents, learned to warm a teapot and drink tea, listened to their stories of girls on the rampage in Dublin and heroes in Belfast, slept often in their spare room, slept with Marie a few times until Anne found out. I only understood the betrayal when I saw it on her face. I don’t know why she didn’t hold it against me. I guess she saw how young I was in many ways and decided to treat me kindly. And I’m a sucker for kindness, even if it ends.

But it hadn’t yet, not then. One night, when I was hanging out with them at their new place on Fifth Street, they announced they were going to dinner at some Cuban playwright’s house because she wanted to start a lesbian action group. I tried to invite myself along, but they weren’t having any of it: “We don’t really know her. That would be rude.” But what’s meant to be is meant to be, and I still ended up in the Lesbian Avengers. And had my dinner with that playwright, Ana Simo.

If I mention Kathryn first, it’s because I’m trying to remember what those days were like, what I was like, actually, when the East Village really did seem like a small town, and my dyke friends lived just around the corner, dragging their politics and art into the street. I remember neighborhood fixtures, like a homeless black man down near Fourth who ranted about honkeys and The Man and would spit at anything that moved. There was a cracked white woman, too, on St. Mark’s Place, who would set up a card table with tattered antiporn pamphlets and a faded blow-up of that
Playboy
illustration that had a woman going through a meat grinder. There were also the ambulatory skeletons of people dying from AIDS, and I ventured into a couple of ACT UP meetings at Cooper Union, but there were so many people, so many men. I also tried a Women’s Action Coalition meeting, but WAC was stuffed with those good-smelling SoHo types who had never applied for Medicaid. Closer to me was that young black woman who went around the park with Band-Aid–colored leggings smeared in the crotch with an enormous bloody stain.

Mostly I traced the neighborhood one concrete block at a time with my notebook and pen, looking for a moment or two of grace. Like that time in the middle of the night I saw this man playing Bach on his guitar in front of the Most Holy Redeemer Church, all around crumpled brown bags and pools of piss. He played with such concentrated joy even the drunks halted in their reeling dance back home. That grace is gone now, gone for me, anyway. Like Keith Haring’s funny fucking figures, the anguished cries of David Wojnarowicz, and the tower in the community garden at Sixth and B that rose up bit by bit until it reached two or three stories, all scrap lumber, broken dolls, and old shoes strung on. It got too high. Aspired too much without permits. And probably was a menace.

Amy moved to Boston a long time ago. Ana and I went to France for a while. When we came back in 2010, Kathryn was one of the few old timers left who I’d kept up with, though she splits time with San Francisco. Not long ago, we ate big greasy burgers at Paul’s, which still has the giant plastic hamburger outside. Afterwards, we went back to her place near the park, and listened to a little music—though not the Indigo Girls or Sinéad O’Connor—and talked a lot, about art and politics, the big scar on her chest, and the tiny ones on my belly. When I walked home, to Ana’s, to ours, this time, through the silent streets, I tried to erase the chic restaurants, all the fancy apartment buildings, and cute little shops and feel what lay beyond.

Probably it happened like this. Amy came home from her job at the advertising agency doing Photoshop and Illustrator, changed into shorts, and we walked together to the Community Center over on West Twelfth, passing from artistic grunge and Latino flash to the bourgeois respectability of the West Village, though the center hadn’t achieved that yet. It was crumbling and dirty, but very alive. Since coming to New York a couple years before, I’d only been there twice. Once, for a meeting of the Irish Lesbian and Gay Organization (ILGO) where I felt totally out of place despite my name. Again, for a thing put on by queer Puerto Ricans where I got all choked up at their fight for independence from the United States. They showed an image of Pedro Albizu Campos’ body broken by jail and torture, and pictures of Lolita Lebrón, who had fired a few rounds into the House of Representatives and then rotted in a U.S. pen for twenty-five years before she was amnestied out.

The meetings were listed in front of the desk. I blanched a little at the name.
Avengers
was great, but
lesbian
seemed a label of no return. Not that others hadn’t stuck it on me. There was that summer after my sophomore year when I was working in Yellowstone with a skinny insecure “friend,” and some afternoons the other girls would stand outside our dorm room howling, “Lezzies, lezzies, lezzies” like a pack of wolves. In Cincinnati once, a carload of guys with scrawny white necks threw beer bottles at me, yelling, “Fucking dyke.” I knew I mostly liked girls, but I’d hedged my bets when I’d written to my mother to come out and named myself
bi.
She fired off a disgusted response, writing
prostitute
was more like it if my changing addresses were anything to go by. She didn’t want to hear from me “until you’re the girl God wants you to be.”