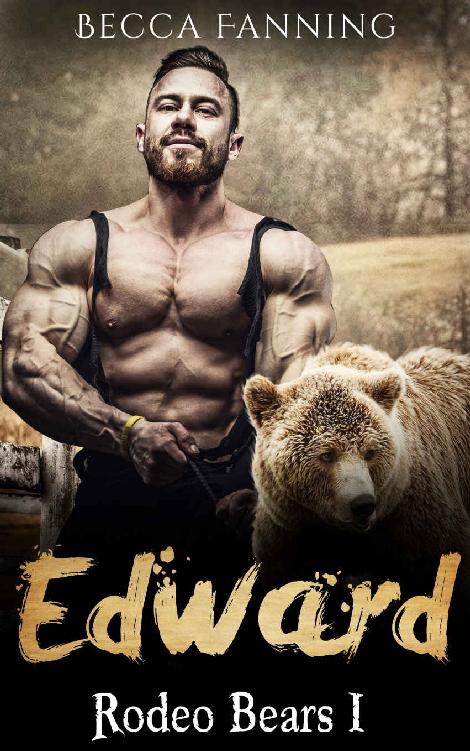 Thank you for supporting my work. I hope it’s as much fun to read as it was to write. This is the special Kindle Unlimited version of Edward. After you’re done reading it, you can continue to read almost every other story I have on Amazon. I’ve included them for free for you. Just keep turning pages as long as you like.

Also, if you sign up to my newsletter, I’ll send you five exclusive stories that you can’t get anywhere else!

The heat hit her first, embracing her like a lover in the dark. Being from the Midwest, Dakota Blair had little experience with the heat, but she wasn’t in the Midwest any longer. She was far from it, a stranger in the arid desert of West Texas, a stranger on the run.

Keeping her head low under the dim lights, Dakota stepped off the bus into a station that was abandoned in the late hour. Attacked by the heat, clumps of her chestnut hair stuck to the back of her neck as she waited for the driver to unload her duffle bag. She was surrounded by a mass of people, fellow travelers weary from the journey. The bus had been full. She was glad. It was easy to hide in a crowd, much more so than standing exposed on her own.

When she had her bag, Dakota followed the others into the lobby. It was narrow and unwelcoming, designed to keep people moving, deterring the homeless and the broken from sleeping on its benches. Dakota wasn’t broken, but she didn’t see herself going anywhere for the remainder of the night. She had money, and she had ID, but she didn’t want to use it. She didn’t want anyone knowing who she was or why she was here.

Unless I can find a cheap motel
, she thought, moving to a board that listed accommodation in the area.
I’m sure West Texas has its share of scandal. There’s got to be a place I can bribe my way into without showing them ID.

Setting her bag down, she skimmed the board. There were plenty of bad motels, but a notice caught her attention. Printed on bright yellow copy paper, a woman advertised a room for rent in her apartment.

No drinks. No dealers. No conmen.

It didn’t say anything about fugitives. Taking out her phone, a burner she had picked up in a remote town in Oklahoma, she dialed the number, but no one answered.

“No desk is going to pick up this late at night,” an elderly woman in a Hoover Dam T-shirt said. “Better to make your way to the hotel and see if they have a room.”

“Yes, of course,” Dakota said politely, returning her phone to her bag. Having traveled for so long, she’d forgotten what it was like to be ruled by a clock. On the bus, she’d been gripped with an anxiety that scattered her sleep. Her light brown eyes would shut and open within the same day, constantly searching to make sure she wasn’t followed. She felt safest at night, when the stops were few and the bus was quiet.

There were only a few hours until sunrise. She wouldn’t bother with a motel. Finding peace in her decision to run to West Texas, she made a bench her bed. It was uncomfortable, but she was free to stretch her long legs out, something she couldn’t do on the bus.

Dakota didn’t sleep. She stared at the stains on the ceiling, pretending they were stars, and she waited for the sun to bring in a new day, a new life.

“This is it,” the woman said, inviting Dakota into her apartment. “It’s li’l enough to make a pig claustrophobic, but the rent is cheap and the bills are low.”

The apartment wasn’t that small. There was room to move. Dakota liked the way the kitchen blended into the living room, both decorated with a country charm. The glasses looked like jars, the cabinets were painted a pale grey-blue, and the doors were made of refurbished wood. It was simple but alluring.

The same could be said about the woman, Brianna Jackson. With her sleek auburn hair and jade-green eyes, Brianna was stunning, but she was grounded, almost to the point that she seemed burdened. Likely in her late-twenties, only a few years older than Dakota, she was far too young to carry such heaviness around her, but she was friendly in spite of it.

Brianna smiled kindly. “What do ya think? Could you stand living here without feeling like a sardine?”

“Can I see the bedroom?” Dakota asked, much more guarded than Brianna. She didn’t want to be discourteous, but she hadn’t come to West Texas so she could make friends. She’d chosen it because the South was loud and rowdy, a place she could get lost in.

Brianna opened a barn door at the back of the apartment, next to the kitchen. It revealed a modest room with a double bed pushed under a tiny window. With little light allowed into the room, the walls were haunted by shadows. In the corner, sitting in the shadows, was a dresser.

“It’s exactly what I’m looking for,” Dakota said. “I’m interested. Is there an application I need to fill out?”

Brianna laughed, her amusement filled with compassion. “No need, chickling. I’m renting it out myself. No agencies. I don’t really need the money, just the company. I travel a lot, and this town ain’t exactly the safest. I’m looking for a built-in house sitter.”

“So you own the apartment?”

“It was handed down to me, but yeah. My name is on the deed.”

That was good. There would be no paperwork to sign, nothing she needed to falsify to protect herself.

Dakota returned to the living room and pulled an envelope from her bag. “I can give you cash up front,” she offered, hoping Brianna would accept. The place was perfect. There was nowhere better she could hide, not unless she was willing to risk bed bugs and drunken neighbors.

Contemplative, Brianna studied her. “That’s an awful big purse you carry around,” she said, meaning the duffle bag.

Dakota looked away, unwilling to share the details of her past. Maybe the apartment wasn’t such a good idea after all. “All that I have on me.”

“Gotcha. I was going to show the room to a few others over the week then choose from there, but I like what I see. You have your secrets, no doubt about that, but we all have things we keep hidden. As long as you’re not planning to bring no trouble, the room is yours.”

“No trouble,” she said, uncertain if it was a promise she could keep.

Brianna took the envelope. “You didn’t steal this, did you?” she asked with clemency.

“Are you handing me all you have? Cuz I don’t want you wandering around with empty pockets.”

“Good.” Brianna tucked the envelope into the back of her jeans without counting the money inside. “Then hurry on up and change. We have a rodeo to get to, and you can’t go wearing a sweatshirt. You’ll wither away like a tulip without water.”

“A what?” Dakota asked, taken aback.

“A rodeo. Call it your roommate initiation. I’m a bull rider. The best in my class. I can’t live with somebody who’s never seen a bull buck. You wouldn’t understand anything I have to say.”

Dakota glanced at her room. All she wanted to do was sleep. “I think I’ll have to pass, but thank you.”

“You can thank me after all the fun you’ve had. You look like you’re in need of some fun, chickling. Go on now. Shower and get dressed. I’m about to change your life.”

I came to the South because it was loud and rowdy
, Dakota mused as they entered the rodeo.
Careful what you wish for.

When she thought of rodeos, beefed-up rednecks sporting cowboy hats and rugged smiles came to mind, mavericks who were rambunctious and fowl-mouthed, sons and daughters of the Wild West. She was right. In the stadium where the rodeo events took place, hundreds of country folk cheered on a rider in a pen, their shouts as deafening as a thunderstorm.

Certainty by Eileen Sharp
A Life for a Life by Andrew Puckett
Thief by C.L. Stone
Deepwood: Karavans # 2 by Roberson, Jennifer
Exiled by Nina Croft
For the Strength of You by Victor L. Martin
House Secrets by Mike Lawson
Legend of the Gypsy Queen Skull: The Devil's Triangle - Book 1 by otis duane
Inquisition by Alfredo Colitto
A Dangerous Love by Sabrina Jeffries