Son of a Serial Killer 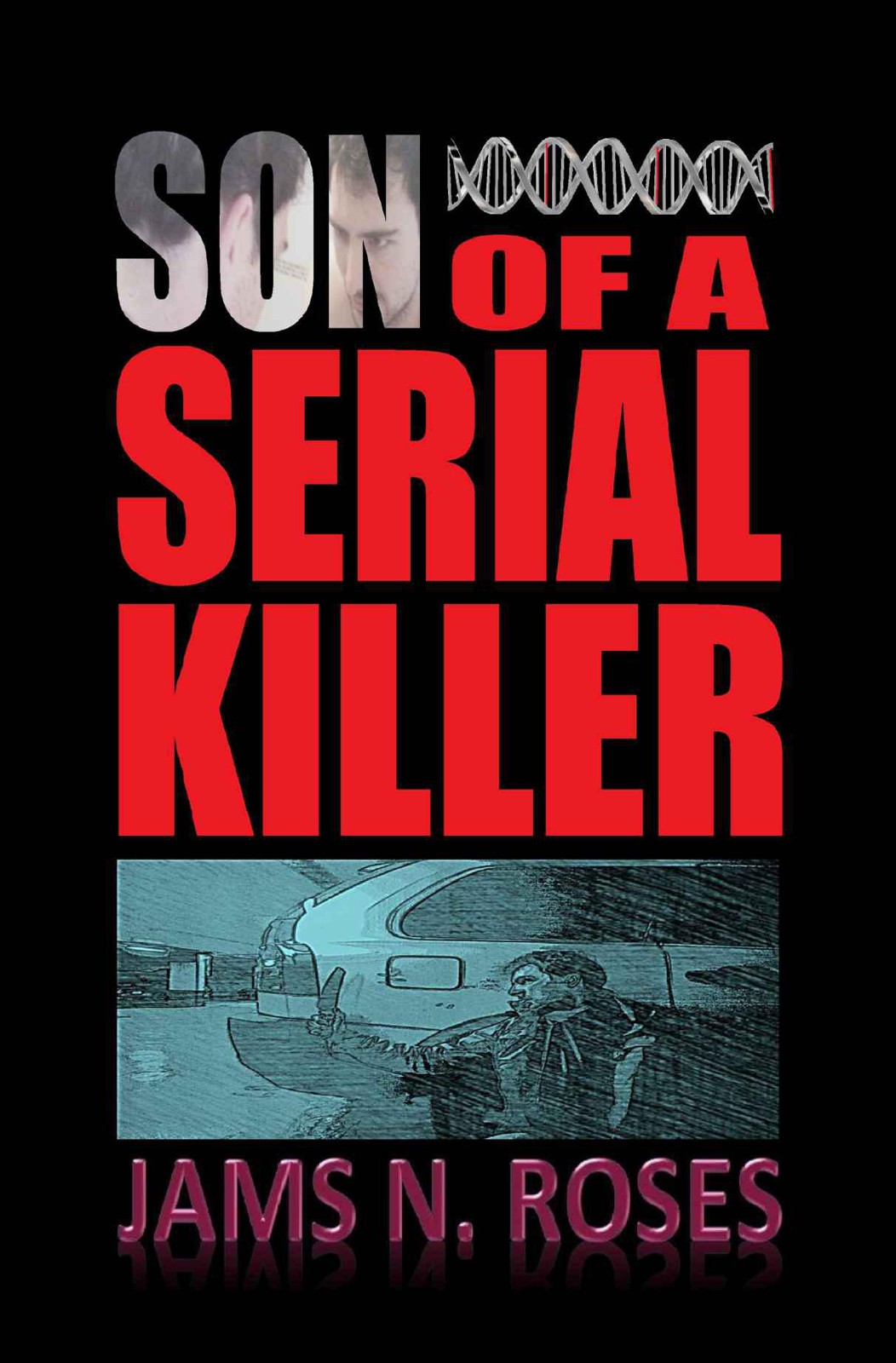 For those who are losing their grip,

Keep on holding on.

This story was born out of daily
frustrations, unnecessary upsets, and general disappointments. Enjoy.

A
genetic disorder is an illness caused by abnormalities in genes or chromosomes, especially a condition that is present from before birth.

Outside, the bustling city thrived with life; neon lights, car horns and falling rain played with the senses of its people.

Inside
, in the lavish apartment of ‘Mr. Money,’ sex was in the air. There was no subtle candle lighting, nor romantic music playing in the background. There was no need. Mr. Money never needed to impress or set the mood. He was paying hard cash as always.

He lay face up, naked, on his king-size, silk-covered bed, as the gorgeous Natalie rode him. She pulled on his chest hair with one hand and reaching behind her, squeezed on his testicles with the other. She knew that excited him, made him orgasm qui
cker, and ultimately pay sooner.

Mr.
Money was Natalie’s best client. He paid the taxi fare to and from his home, always paid over the one hundred and fifty pounds she asked for, and even gave her the occasional piece of jewelry if he’d had a good week on the markets.

The only thing she loved more than sex was the money it brought her.

She climbed
off her ‘trick,’ licked his penis clean, grabbed her dress and strode naked to the bathroom, where she used a flannel to wash her face and private parts.

Mr.
Money sparked a cigarette and counted out three hundred pounds from the bedside drawer, tossing it onto the bed, as Natalie walked out of the bathroom wearing a long, tight-fitting, black dress. She picked up the money, smiled and dropped it into her purse.

Mr.
Money watched as she hit speed-dial on her mobile phone and slipped on her high-heels as she arranged for a taxi to come and collect her. Ending the call, she moved towards her host, kissed him on the cheek and took the rest of his cigarette.

She
headed towards the door, the start of her journey home, back to the side of her unsuspecting boyfriend, the poor soul who thinks he has found his soul-mate, as Mr. Money lay on his bed, sparked another cigarette and laughed to himself.

‘Filthy bitch,’ he said,
‘until the next time.’

Freddy had been drinking since he finished work around noon, as builders can’t work in heavy rain. It was now nine in the evening and he staggered out of the pub, after being asked several times by the landlord to leave. His drunken banter had been misconstrued by a few of the other customers as plain rude and offensive.

The rain had stopped.

Swaying from side to side, he made his way to the poorly-lit car-park behind the pub. He stood beside his work van, fumbling with his belt and buttons until he was able to finally produce his penis from his pants and urinate on the ground around his feet.

He heard movement
behind him and glanced backwards, obliviously letting his own piss fall onto his work boots, before he shrugged off the noise as nothing and continued to empty his bladder in peace. After what seemed to him an eternity, he finished only his second leak of the day, quite an achievement for someone who had gotten through nine pints of lager, only breaking up the fluids with the occasional packet of crisps or handful of peanuts.

He managed to do up his buttons but couldn’t solve the problem of fastening his belt,
‘fuck it,’ he said, giving up on it and letting the ends hang loose.

He reached into a
pocket to find his car-key wasn’t there. At the second pocket he found it, then attempted to put the key in the lock but dropped it to the ground where he had just been urinating. Leaning down to pick up the key he collapsed against the van and fell to his knees.

He laughed out loud.

He felt around on the ground until he found the key, then as he pulled himself to his feet, using the wing-mirror to steady him, he noticed somebody stood just a couple of yards away from him.

The person, stood
in the shadows, was wearing an all-in-one, white, plastic painters overall, the sort one wears over one’s clothes and that comes with a hood. A separate face mask hid the latex-gloved stranger’s face from view.

‘
You don’t wanna be working this late,’ said Freddy, not sure what to make of the person stood before him. ‘It’s a bit dark for painting.’

The ‘painter’
moved towards Freddy with something in hand that reflected the light from the one lamppost that shone in this part of the car-park. Freddy didn’t realize what it was, that shiny object that launched towards him, until it stuck into his throat.

Again and again, the killer thrust the knife into the face and neck of the drunken, defenseles
s Freddy. He fell to the ground and briefly clutched at his wounds before the sound of his last, desperate gasps for air were muffled by the blood that gushed both out of his body and down his throat.

Freddy no longer breathed, but his brain still fought on with the last of the oxygen in his blood. He saw the killer slowly walk away, wipe the blood-covered knife on the white overalls and disappear into the darkness.

The lack of blood in Freddy’s body placed extreme stress on his heart. He suffered a cardiac arrest and died alone, on the wet ground. His alcohol-diluted blood flowed heavily, like the rain that fell freely earlier that day.

The next morning, Graham Green yanked open the front door of his house and stormed along the footpath to the front gate. He burst into tears as he struggled to slide open the bolt of the gate, a mass of rust made it stick and awkward to move. He had always meant to sort that out, maybe sandpaper off the rust or even change the whole thing for a new one, but he was too busy working on other people’s properties, and by the time he got home, he was always too tired or preoccupied with looking after his wife, or he just forgot to do it until he passed through it again the next morning.

He loved working. E
ven approaching retirement age, he knew he wouldn’t stop putting in a day’s graft, that’s just the way he was raised. A few years ago, he even won on the lottery. He wasn’t the sole winner, it was a shared jackpot, but easily enough to put his feet up and live out his days comfortably.

But he didn’t want to waste his days like that. He kept the money he won a secret from almost everyone, not even letting his wife know, for fear of being forced to live a life he didn’
t want, like endless cruises to countries where he couldn’t understand the language, or going to eat in restaurants where the dishes were so jazzed up you couldn’t tell the food from the garnish.

No, he kept it to himself. He didn’t want things to change.
But that morning things had changed, in a way that made it impossible for things to go back to how they were before. A discovery had been made. A truth uncovered.

He didn’t know where he was going when he finally forced his way out of the gate, no longer a prisoner in his own front garden.

He walked. He cried.

‘All that blood.’ he said to himself, as he moved forward, not looking at anything or anyone. He just kept going, crying, talking to himself, ‘so much blood.’

Not long after, they watched as the coroner took his broken body away.

Detective Inspector Summers sat across the desk from her superior, Detective Chief Inspector Watts. Summers had just learnt that she was taking over the case of all cases, the big one, the reason she had given up her childhood dream of becoming a doctor.

It was t
he longest ongoing serial murder case in the country’s history, the case that had now had no fewer than nine different Detective Inspectors banging their heads against brick walls, clutching at straws and getting nothing but a head-ache and early retirement for their troubles.

‘
The Phantom’ had recently forced another DI to reconsider his future in the force. The stress of having such a high-profile case, the pressure from the powers that be as well as the nation’s media questioning his every move was just too much, like for those who had tried and failed to catch the killer before.

She was breezing through medical school when circumstances gave her a change of heart; the goal-posts had been moved. What had one day seemed so important to her had to wait. At least, she hoped it was just on hold.

The Phantom
was named so by the press for his ability to arrive, leave a victim dead, vanish without a trace and leave no witnesses. He’d been murdering his victims in the city for eight years now.

The most recent of
which was a local builder, Frederic Clark, aged twenty-eight. Freddy was found dead, slumped against the side of his work-van behind his local boozer, with twenty-three stab wounds inflicted between the lower half of his face and the top of his chest. That brought the total number of murders attributed to The Phantom to seventeen. That was two months ago.

Summers had joined the police force, walked the beat, taken the exams, transferred to CID and climbed the ranks as quick as po
ssible. This was the first time The Phantom’s case had been made available since she had been promoted from Detective Constable, and she deserved it.

She’
d hated every step of her career in the force, hated dealing with the drug addicts, thieves, violent men and women, rapists, child molesters and murderers. She wanted to be in a surgery, saving the lives of the sick. Instead, she was dealing with the sick and twisted.

Summers didn’t think to ask if he meant good luck with solving the case or dealing with the media attention. She hated the media, ever since that horrid event that took place six years earlier. She picked up her coat from the back of her chair, nodded to Watts and left.

Before giving her press conference, which was just to prove to the media that the police hadn’t given up the hunt for The Phantom, Summers made a pit-stop in the ladies room.

She
checked that the cubicles were empty then she took a small metal hip-flask from her inside pocket and took a large gulp. She placed the whiskey back in her coat and sprayed some mint breath-freshener into her mouth to cover the scent of alcohol. She was never a big drinker before, but the pressure she put on herself to complete this mission was taking its toll.

When she finally becomes a doctor in the future, she told herself, at least if she felt low, she could self-prescribe if necessary. Until then, the occasional gulp of whi
skey would have to do, even at eight in the morning like today.

She checked her appearance
in the mirror and went to face the reporters.

Anything but Normal by Melody Carlson
The Traitor's Wife: A Novel by Allison Pataki
My Kind Of Crazy by Seiters, Nadene
The Naming of the Beasts by Mike Carey
First World by Jaymin Eve
The Deliverance of Dilan (The Syndicate #4) by Kathy Coopmans
Dreaming of Jizzy by Y. Falstaff
The Disposables by David Putnam
The Spectral Link by Thomas Ligotti
Seducing the Ruthless Rogue by Tammy Jo Burns