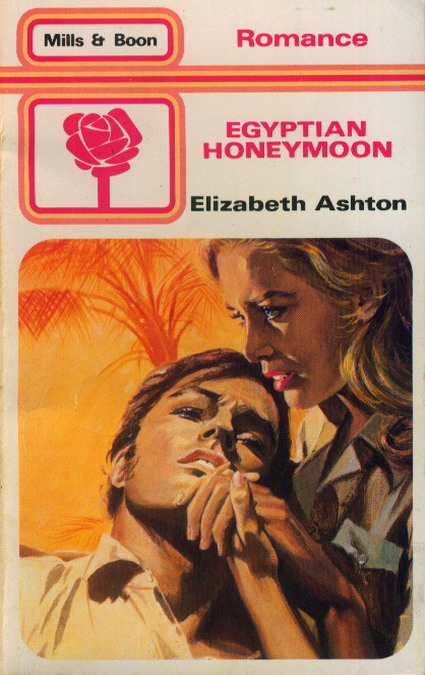 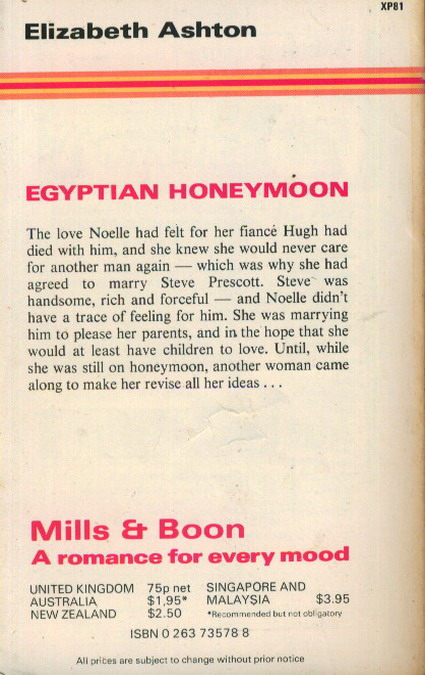 The love she had felt for Hugh had died with him, Noelle knew, and she would never care for another man again—which was why she had agreed to please her parents by marrying Steve Prescott; she just hadn't any feelings left, least of all for Steve. Until another woman came along to make her revise all her ideas about love…

Book you will enjoy

The first time he met Jo, Marcel de Savigny mistook her for a boy—not surprisingly, because she was the tomboy of the family and scorned all the feminine things like pretty clothes and makeup—and romance. But Marcel persuaded her to go back with him to his home in France to be a companion to his sister—and Jo soon found herself changing her mind about a lot of things!

She should never have married Gray Crawford, Frances thought in despair, however much she loved him. She should have faced the fact that their marriage would be a disaster from the start. For the only love of Gray's life was, and always would be, his speedboat—Silver Arrow.

Why should the Greek shipping tycoon Alexander Leandris look twice at plain jane Jan Reynolds when it was her beautiful cousin Renata he was pursuing? Especially as Renata wasn't particularly bothered whether he was offering her' marriage or something rather less, and Jan wasn't that kind of girl at all. But then Jan found herself inadvertently aboard Alex's yacht, virtually his prisoner…

Niccolo Martelli was certainly a fascinating young man—but he was a rich, aristocratic Italian, while Lucy was only a humble nannie. Surely Niccolo couldn't really seriously care for her? Wasn't it far more likely that he was using her as a smoke-screen to conceal his affair with Lucy's beautiful employer?

The bride bent over the register to sign her name, then straightened her back to throw a half frightened glance at her new husband. She was no longer Noelle Esmond, but Noelle Prescott, bound to the enormously successful and wealthy man standing beside her. Every one of the six bridesmaids who escorted her was envious of her good fortune, and threw wistful glances at Steven Prescott's handsome face.

Satisfaction shone in the faces of Jack and Marjorie Esmond, the bride's father and mother, who had both used every argument and persuasion they could devise to bring about this union. Noelle had at last capitulated, and they felt all the relief of a sea captain who had brought his ship bearing valuable cargo safely to port after a hazardous voyage. Even now they could hardly believe that Noelle had at last seen reason and was securely tied to the distinguished man who had courted her assiduously for eighteen months.

Of course it was terribly sad that Hugh Forbes had died in that accident, so young and full of promise, but he could never have provided for their daughter as lavishly as Steve was going to do, and Noelle could not be expected to mourn Hugh for ever. Steve looked magnificent in the full glory of striped trousers and morning coat; he was older than Hugh had been and maturity became him, he was so obviously established and successful. This wedding in a fashionable London church was a much more suitable setting for Noelle's beauty than the country one she had wanted. That was what she had planned when she was going to marry Hugh, but Steve wished to show off the loveliness he had won to his friends, and she had gracefully fallen in with his arrangements. After all, he was footing the bill for the reception, which was far beyond the Esmonds' means. Dear Noelle was so modest, she did not realise her own worth, but Steve appreciated it. The rope of pearls about her neck was a token of all the benefits to come.

Noelle herself experienced a moment of panic as she met Steve's cold grey eyes. She had sworn to love, honour and obey him, and he was still almost a stranger to her. The honouring would not be difficult, obedience she was sure he would exact, but love could not be commanded to order. She doubted if she could ever come to love him, not as she had loved Hugh.

Steven Prescott was reputed to always get what he wanted in the end, by patience and perseverance, and he had wanted her. He had had to wait for her, but he had worn down her resistance in the end. Noelle shivered slightly, wishing she was anywhere but where she was. She had surrendered eventually because with Hugh gone, she had -not greatly cared what became of her, and her parents were so set upon this marriage. Her father's job was insecure and Steve had promised to find him a better one if he became his son-in-law, and then there was Simon, her young brother, of whom she was very fond. Steve could do so much to give him a good start in life. It seemed almost selfish to refuse him when he could benefit them all so much, but now, faced with the fait accompli, she was scared by what she had done.

She had been working as a model when she had first met Steve, and Hugh was a designer in Forbes Fashions, the establishment that employed them both. He had been elated when Steve had attended one of their shows escorting a lady who was reputed to be his latest flame.

'He's very generous,' Hugh had said. 'He doesn't mind what he pays for favours given, and as you're much the same build as his lady friend, show off the gowns in your own inimitable style and we'll bag a big order.'

Noelle won more than the order, she excited the escort's interest.

When he asked her out to dinner, Hugh pretended he did not mind. It was good for business for Noelle, wearing one of Forbes' most alluring creations, to be seen in a fashionable restaurant. A dinner would not commit her to anything.

'Insist it must be a public restaurant,' he had warned her. 'No private room or any of that lark.'

Steve was too wily a bird to rush his fences and the girl was shy game. He took her to the Ritz.

Noelle, entrancing in blue crepe which matched her eyes and enhanced the silvery fairness of her hair, had made her position clear from the start. She was going to marry Hugh and they planned to open their own boutique. Steve listened with an inscrutable expression and encouraged her to discuss her plans. He courteously wished her luck—in matrimony and business, and invited her and Hugh to a party at which he told them some Parisian couturiers would be present whom they might like to meet.

'Are you interested in the rag trade?' Noelle had been surprised.

'I'm interested in many trades and have my fingers in a lot of pies,' he had told her. 'I might perhaps invest in your boutique.'

But there was an avid look in his eyes which Noelle did not like. Hugh was keen to go, and deciding Steve could hardly make a pass at her at a party of which he was host, Noelle went, wondering if the lady of the moment would be present, for Steve was unmarried and his affairs were numerous. Sure enough, a stylish-looking redhead was acting as hostess, who treated Steve with easy familiarity. He took no special notice of Noelle, so it seemed she need have no qualms, and both she and Hugh enjoyed the party which was given in a hotel. Food and drink were lavish, the surroundings glamorous, the company amusing. It was not often they had a chance to indulge in such luxury. After that he was always turning up upon some pretext or the other. Noelle had no reason to suppose he was in pursuit of her, but instinct warned her she was being stalked in a subtle and menacing manner, though what she possessed to interest such a prominent man she could not conceive. Her father had noticed something and bewailed her involvement with Hugh.

'I believe Mr Prescott has taken a fancy to you,' he told her. 'He's offered me a situation in one of his offices, and he asked a lot of questions about you. Just think what an opportunity you're throwing away by wasting yourself on that very ordinary young man!'

'You've no real grounds for such ideas,' she had retorted, 'and I don't aspire to join his collection of fancies past and present.'

'Loose women who don't count,' Jack had commented scornfully. 'He isn't married, and he'll want an heir to his vast commercial empire, and may be looking for a suitable wife.'

'Which I'm not,' Noelle had declared. 'He could marry into society, and I'm only a model girl.'

'Actresses and models have ended up as peeresses before today,' her father remarked pensively. 'Steve will be in the Honours List before he's finished. Lady Prescott.' He smacked his lips. 'You're beautiful, my lovely, modest and chaste, which a lot of them aren't.'

'I'm going to marry Hugh,' Noelle had reminded him firmly. 'So put all these delusions of grandeur out of your head, darling.'