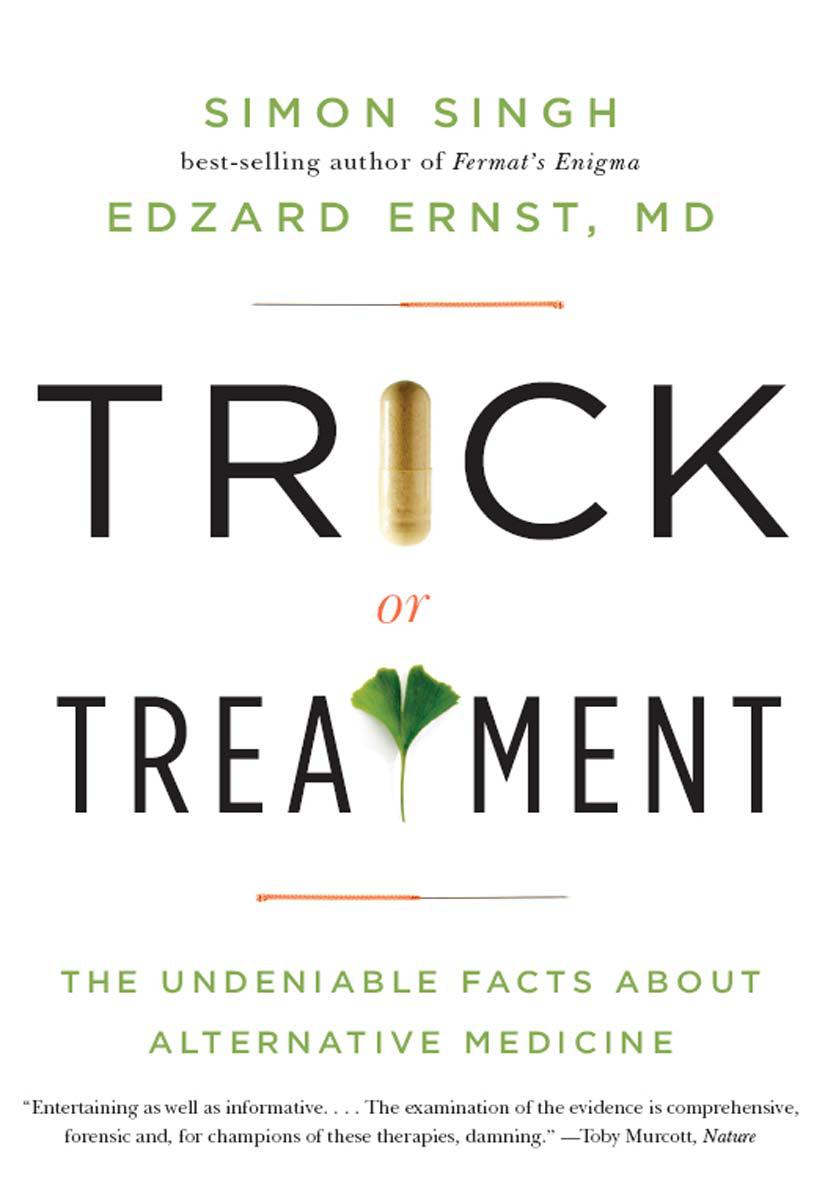 The Undeniable Facts About Alternative Medicine

First published in Great Britain in 2008 by Bantam Press, an imprint of Transworld Publishers, under the title
Trick or Treatment? Alternative Medicine on Trial

HRH The Prince of Wales

1
How Do You Determine the Truth?

2
The Truth About Acupuncture

3
The Truth About Homeopathy

4
The Truth About Chiropractic Therapy

5
The Truth About Herbal Medicine

6
Does the Truth Matter?

T
HE CONTENTS OF THIS BOOK ARE GUIDED ENTIRELY BY A SINGLE PITHY
sentence, written over 2,000 years ago by Hippocrates of Cos. Recognized as the father of medicine, he stated:

‘There are, in fact, two things, science and opinion;

If somebody proposed a new medical treatment, then Hippocrates declared that we should use science to decide whether or not it works, rather than relying on somebody’s opinion. Science employs experiments, observations, trials, argument and discussion in order to arrive at an objective consensus on the truth. Even when a conclusion has been decided, science still probes and prods its own proclamations just in case it has made a mistake. In contrast, opinions are subjective and conflicting, and whoever has the most persuasive PR campaign has the best chance of promoting their opinion, regardless of whether they are right or wrong.

Guided by Hippocrates’ dictum, this book takes a scientific look at the current plethora of alternative treatments that are rapidly growing in popularity. These treatments are piled high in every pharmacy, written about in every magazine, discussed on millions of web pages and used by billions of people, yet they are regarded with scepticism by many doctors.

Indeed, our definition of an alternative medicine is any therapy that is not accepted by the majority of mainstream doctors, and typically this also means that these alternative therapies have mechanisms that lie outside the current understanding of modern medicine. In the language of science, alternative therapies are said to be biologically implausible.

Nowadays it is common to hear the umbrella term ‘complementary and alternative medicine’, which correctly implies that sometimes these therapies are used alongside and sometimes instead of conventional medicine. Unfortunately it is a lengthy and clumsy phrase, so in a bid for simplicity we have decided to use the term ‘alternative medicine’ throughout this book.

Whatever the answer, we decided to write this book in order to get to the truth. Although there are already plenty of books that claim to tell you the truth about alternative medicine, we are confident that ours offers an unparalleled level of rigour, authority and independence. We are both trained scientists, so we will examine the various alternative therapies in a scrupulous manner. Moreover, neither of us has ever been employed by a pharmaceutical company, and nor have we ever personally profited from the ‘natural health’ sector – we can honestly say that our only motive is to get to the truth.

And our partnership brings balance to the book. One of us, Edzard Ernst, is an insider who practised medicine for many years, including some alternative therapies. He is the world’s first professor of alternative medicine, and his research group has spent fifteen years trying to work out which treatments work and which do not. The other of us, Simon Singh, is an outsider who has spent almost two decades as a science journalist, working in print, television and radio, always striving to explain complicated ideas in a way that the general public can grasp. Together we think that we can get closer to the truth than anybody else and, equally importantly, we will endeavour to explain it to you in a clear, vivid and comprehensible manner.

Our mission is to reveal the truth about the potions, lotions, pills, needles, pummelling and energizing that lie beyond the realms of conventional medicine, but which are becoming increasingly attractive for many patients. What works, and what doesn’t? What are the secrets and what are the lies? Who is trustworthy and who is ripping you off? Do today’s doctors know what is best, or do the old wives’ tales indeed tap into some ancient, superior wisdom? All these questions and more will be answered in this book, the world’s most honest and accurate examination of alternative medicine.

In particular, we will answer the fundamental question: ‘Is alternative medicine effective for treating disease?’ Although a short and simple question, when unpacked it becomes somewhat complicated and has many answers depending on three key issues. First, which alternative therapy are we talking about? Second, which disease are we applying it to? Third, what is meant by effective? In order to address these questions properly, we have divided the book into six chapters.

Chapter 1 provides an introduction to the scientific method. It explains how scientists, by experimenting and observing, can determine whether or not a particular therapy is effective. Every conclusion we reach in the rest of this book depends on the scientific method and on an unbiased analysis of the best medical research available. So, by first explaining how science works, we hope to increase your confidence in our subsequent conclusions.

Chapter 2 shows how the scientific method can be applied to acupuncture, one of the most established, most tested and most widely used alternative therapies. As well as examining the numerous scientific trials that have been conducted on acupuncture, this chapter will also look at its ancient origins in the East, how it migrated to the West and how it is practised today.

Chapters 3, 4 and 5 use a similar approach to examine the three other major alternative therapies, namely homeopathy, chiropractic therapy and herbal medicine. The remaining alternative therapies will be covered in the appendix, which offers a brief analysis of over thirty treatments. In other words, every alternative therapy that you are ever likely to encounter will be scientifically evaluated within the pages of this book.

The sixth and final chapter draws some conclusions based on the evidence in the previous chapters and looks ahead to the future of healthcare. If there is overwhelming evidence that an alternative therapy does not work, then should it be banned or is patient choice the key driving force? On the other hand, if some alternative therapies are genuinely effective, can they be integrated within mainstream medicine or will there always be an antagonism between the establishment and alternative therapists?

The key theme running throughout all six chapters is ‘truth’. Chapter 1 discusses how science determines the truth. Chapters 2–5 reveal the truth about various alternative therapies based on the scientific evidence. Chapter 6 looks at why the truth matters, and how this should influence our attitude towards alternative therapies in the context of twenty-first-century medicine.

Truth is certainly a reassuring commodity, but in this book it comes with two warnings. First, we will present the truth in an un apologetically blunt manner. So where we find that a particular therapy does indeed work for a particular illness (e.g. St John’s wort does have antidepressive properties, if used appropriately – see Chapter 5), we will say so clearly. In other cases, however, where we discover that a particular therapy is useless, or even harmful, then we shall state this conclusion equally forcefully. You have decided to purchase this book in order to find out the truth, so we think we owe it to you to be direct and honest.

The second warning is that all the truths in this book are based on science, because Hippocrates was absolutely correct when he said that science begets knowledge. Everything we know about the universe, from the components of an atom to the number of galaxies, is thanks to science, and every medical breakthrough, from the development of antiseptics to the eradication of smallpox, has been built upon scientific foundations. Of course, science is not perfect. Scientists will readily admit that they do not know everything, but nevertheless the scientific method is without doubt the best mechanism for getting to the truth.

If you are a reader who is sceptical about the power of science, then we kindly request that you at least read Chapter 1. By the end of that first chapter, you should be sufficiently convinced about the value of scientific method that you will consider accepting the conclusions in the rest of the book.

It could be, however, that you refuse to acknowledge that science is the best way to decide whether or not an alternative therapy works. It might be that you are so close-minded that you will stick to your worldview regardless of what science has to say. You might have an unwavering belief that all alternative medicine is rubbish, or you might adamantly hold the opposite view, that alternative medicine offers a panacea for all our aches, pains and diseases. In either case, this is not the book for you. There is no point in even reading the first chapter if you are not prepared to consider the possibility that the scientific method can act as the arbiter of truth. In fact, if you have already made up your mind about alternative medicine, then it would be sensible for you to return this book to the bookshop and ask for a refund. Why on Earth would you want to hear about the conclusions of thousands of research studies when you already have all the answers?

But our hope is that you will be sufficiently open-minded to want to read further.