Read Embrace of the Enemy (Winds of Betrayal) Online

Embrace of the Enemy (Winds of Betrayal) 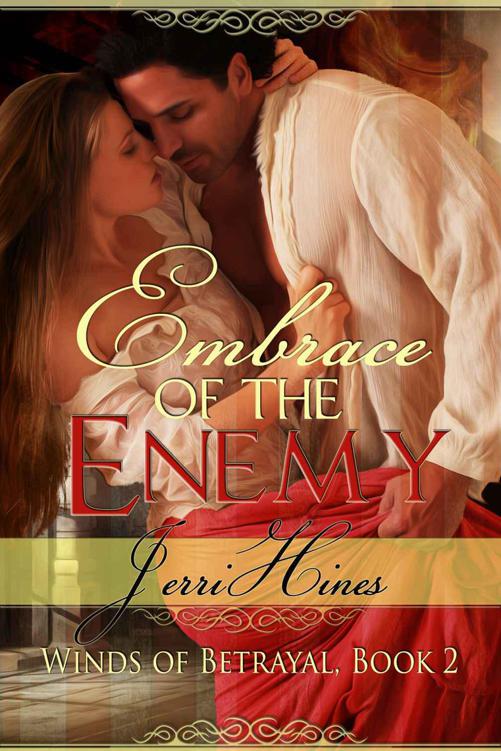 EMBRACE OF THE ENEMY

EMBRACE OF THE ENEMY

All rights reserved. This book or parts thereof may not be reproduced in any form without permission. The scanning, uploading, and distribution of this book via the Internet or via any other means without permission of the author is illegal and punishable by law. Your support of the author’s rights is appreciated.

Embrace of the Enemy

Another cannon ball struck and another. Shutting his eyes, clods of dirt showered Doctor Jonathan Corbett. He heard the drum cadence growing louder. The beat thudded in rhythm announcing the Redcoats arrival. Many of the untrained troops within the ragged American army screamed in outright terror.

The British had crossed into New York Island and landed at Kip's Bay. Jonathan had seen the big ships appear in the East River that morning, just two hundred yards from shore. Even before Jonathan lifted his head to risk a look, he smelled smoke. Dirt stained Jonathan’s skin; his shirt, sweat-sodden. Glancing around, Jonathan watched in horror as the militia pulled back in panic.

Soldiers, British and Hessian, attacked with glittering steel, the steel of bayonets. Upon this sight, the militia’s initial withdrawal became an outright riot. Jonathan heard a British musket ball hissing by. He grabbed his own weapon. Men thrashed and screamed. Bodies fell.

Jonathan ducked as a cannon ball exploded no more than twenty feet in front of him. Looking up, something sticky struck him in the face. Blood. He saw a soldier lying wounded gripping tightly to a hole in his stomach. Blood oozed out between the man’s fingers. Jonathan crawled to the side of the fallen soldier. Frustration encompassed Jonathan when he comprehended there was nothing he could do for the man.

Suddenly a sight caught his eyes. General Washington in his dark blue coat with white facing and a buff waistcoat rode up on his white horse—enraged. Washington shouted, demanding the men return to their lines. Whipping his horse one way and then another, Washington struggled to stem the stream of fleeing panic-stricken militiamen. Momentarily paused the men formed a defense line, but the panic ensued once more upon the sight of the Redcoats. The command to halt went ignored.

Washington threw his hat to the ground, lashing with his cane at his men as they streamed past him in a frenzied retreat. Washington bellowed, “Are these the men I am to defend America with?”

Through the smoke and dust, Jonathan made out a soldier upon horseback and one he recognized. Gabriel rode up. He hadn't seen his friend since his conversation with Lanson. He had made a conscious decision not to seek out Gabriel. He had too many worries upon him:
Catherine, little William, and his sister, Hannah. Moreover, he had to deal with Gannon's cutting betrayal. He would contend with Gabriel in his own time. At the moment his immediate concern lay with General Washington.

Gabriel looked over his shoulder and nodded toward Jonathan. He nudged his horse toward the uncharacteristically listless Washington. He grabbed the reins and led the Commander’s horse from the shameful scene. Jonathan watched until they rode out of sight. Retreat had been signaled. The Continental Army was on the run inland.

Jonathan sighed. His thoughts turned quickly to his son and wife, hopefully safe, but a sickening feeling overcame him. Retreating with what was left of the army, Jonathan watched the city grow smaller in the distance. A fear crept inside of him for the one that was now caught within the city— Hannah.

Jonathan stumbled and dropped to his knees, but sprang up and rammed Gabriel, knocking him off his feet. Jonathan toppled Gabriel into the mud. Jonathan found steady footing again, but the man who once had been his friend avoided the next blow, sending Jonathan downward.

Gabriel jumped down on top of him, “You're drunk!”

“I may be, but when I get up I'm going to kill you,” Jonathan bumped up sending Gabriel backwards.

“Oh, heavenly Christ!” an officer spoke, looking over the mud covered pair. A couple of Continental soldiers broke them up. One restrained Jonathan.

“A couple of Virginians, Major!”

“That is no excuse,” the officer said looking on disgusted. One of the soldiers that held tight to Jonathan beside him leaned over and whispered, “One's the doctor, sir.”

The young officer glanced over both. “Names.”

“You're Lieutenant Witherspoon?” the officer said. “I was looking for you. The General has requested your presence. Go clean up the best you can. I believe he wishes to commend you for your actions a few days hence, but if he sees you like this it might be different.”

Jonathan’s eyes glared at Gabriel. As Gabriel passed he tried to pat Jonathan's back. Jonathan almost initiated the fight again.

The young officer stared at Jonathan and motioned for the soldiers to release him. “So you’re Jonathan Corbett?”

Jonathan nodded breaking his trance upon Gabriel. He turned toward the voice, “I am.”

“My name is Major Benjamin Tallmadge. Would you care to spare me a few minutes of your time after you clean yourself up? And Doctor, drink some coffee.”

Jonathan had no choice but to follow Major Tallmadge’s orders. At the moment he couldn’t have cared less if they threw him in the brig or threw him anywhere. His head spun. He hadn’t intended to fight Gabriel, but his temper got the best of him; watching the others congratulate Gabriel on his heroics in saving General Washington and Gabriel accepting all. It had been too much to bear.

Jonathan did the best he could to remove the crusted mud. He had no other clothes to wear. The army had to travel fast. He washed his face and walked down toward Major Tallmadge’s tent. He bent down through the flap of the tent.

Major Tallmadge sat at a makeshift table. He smiled wearily at Jonathan. “It was a hard last few days. Has it not, Dr. Corbett?”

Jonathan nodded. “Harder for some than others?”

Major Tallmadge shrugged. “I believe that to be true. That’s why I’m going to overlook the incident today. But I have wanted to talk with you. It’s a coincidence that I was just having a talk about your father with General Washington. He told me that you were within camp. You’re friends with the General’s son, I take it.”

The reference to his father sobered Jonathan. He sat up solemnly. “My father? What do you know about my father?”

“I have been learning, Dr. Corbett. A necessity I’m afraid. The Continental Congress has tried for a while now to integrate some sort of intelligence network. I understand your father had been an integrate part. I understand you helped him before your commission into the army,” Major Tallmadge watched Jonathan’s reaction.

“I became aware of his actions, but in honesty it’s not my calling. I’m afraid I’m not equipped to be other than who I am. But it seems that others within my family have been called upon,” Jonathan eyed Major Tallmadge carefully.

Major Tallmadge eased back in his chair. “We have many problems with establishing a network at the moment, Dr. Corbett. The problem mounts due to the lack of able personnel, such as your father, but he wasn’t the only one. Morse, Schuyler also. It is also hard to know they were betrayed by one we considered our own and that’s what I want to talk to you about at this time.”

Jonathan became silent for a moment. “What, pray, are you referring to?”

“I believe Peter Lanson informed you of our findings and laid out the best course of action for you to come back into the front. I believe we owe your family a debt of gratitude and I wanted to tell you that the situation will play out shortly,” Major Tallmadge said.

Jonathan stood, infuriated. “Am I not to know? I have a wife and a son that needs to be protected.”

Major Tallmadge motioned for him to return to his seat. “All arrangements have been made. I believe Gannon won’t want them to be involved either, I’m sure. Lanson informed you of his dealings. We’ll confiscate all his property and possessions and transfer them over to you since I was informed he stole from you himself. Also, when I receive word it has gone down, you will be allowed a short leave to take care of your matters at hand.”

Major Tallmadge bit his lower lip. He had been handed his new position with Colonel Knowlton going down. Washington, sighting that they had not been able to obtain the least information as to the enemy’s plans, wanted a spy network established immediately within New York. Lanson said New York was in shambles with only a few operatives, a couple with promise, but there were issues to address, which would become a top priority after he dealt with Joseph Gannon.

Knowlton, before his death had detached an operative for a special service, one who volunteered, but wasn’t equipped for the mission. Tallmadge’s heart sank when he read an urgent correspondence from one of his classmates, William Hull.

Benjamin, I tried my best to talk Nathan out of the foolhardy venture but to no avail. I told him it wasn’t within his line of duty. He is much too frank and open tempered to act successfully the part of a spy or to face its danger, which would probably lead to a disgraceful death. No one else would volunteer, though. One of the enlisted men replied upon the request, ‘Fighting the British is one thing, but I have no wish to go among them, be taken, and hung like a dog.’ Nathan took on the quest. God be with him for now he’s gone within.

Worry mounted for his friend in the dangerous position he had put himself in. He studied Jonathan, who had already suffered losing his father and brother to such a death.

“Major Tallmadge, you seem to know more about my life than I do, but tell me how you haven’t mentioned the other situation?” Jonathan asked frankly.

Tallmadge stared at Jonathan. “What other situation are you referring to? I know of no other?”

“You realize that someone obtained the information against my father-in-law. Foiled some attempt upon the General. You can’t tell me you know nothing of her?” Jonathan’s voice rose.

Tallmadge shook his head, racking his brain for some relevance to the issue at hand. For the life of him, he couldn’t recall any. “Dr. Corbett, calm down. I have no idea of what you are talking about.”

“You’re telling me you know nothing of the network’s intention of keeping her within New York when she wanted out. She did what she intended and then the network proceeded to bribe her fiancé, the wondrous Lieutenant Witherspoon, into talking her into staying so she would be trapped within the city. Wouldn’t let me see her. Knew I would have taken her out.