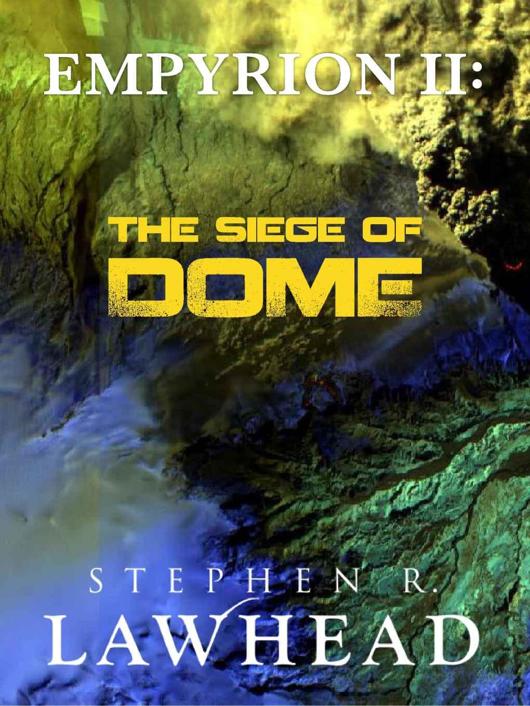 Names, characters and incidents depicted in this book are products of the author's imagination or are used fictitiously. Any resemblance to actual events, organizations, or persons, living or dead, is entirely coincidental and beyond the intent of the author or the publisher.

Other books by Stephen R. Lawhead

The Search for Fierra
The Siege of Dome

The Song of Albion

The Paradise War
The Silver Hand
The Endless Knot

The Iron Lance
The Black Rood
The Mystic Rose

The Siege of Dome

Forward to the 2011 electronic edition

It's said that even a stopped clock tells the correct time twice a day. The same can be said about virtually every SF writer: stuck in your own time, you're still bound to get some predictions right. Thus, I take particular satisfaction in publishing this electronic version of a twenty-five-year-old book that imagined something called a ‘laserfile reader’ — a device similar to the one you're holding right now to read this.

Everything else that was got wrong will not, I hope, prove too great a distraction to your enjoyment, for the EMPYRION SAGA – consisting of
The Search for Fierra
and
The Siege of Dome
– is not an attempt to predict the future. It is, like most works of science fiction, about explaining and understanding the present. In 1985, when the first volume was written, two superpowers vied for world supremacy. One championed individual freedom, the other limited it in the name of a collective good. Both were armed to the teeth with nuclear weapons (still are), and no one was setting a date for an end to the Cold War. The Doomsday Clock was set just a few minutes before midnight in the mid-80s, and like everyone else, my mind was occupied with these matters. As a consequence, my characters were, too.

Re-reading my own book, I remember the thrill of fearlessly inventing two divergent cultures, each with its own landscape, political and social hierarchy, creation myths and religion. And I remember how fun it was to give characters names such as Orion Treet, Asquith Pizzle, and Giloon Bogney .

Perhaps this sort of fantasizing was always my first love – an affair born of countless hours in the library stacks with Robert Heinlein, Ray Bradbury, and Kurt Vonnegut. And maybe it's significant that I've returned to it in recent years. For if we cannot creatively and bravely envision a redemptive future – and do it with a certain degree of humour — what hope is there for the world we must one day inhabit?

And though the last lights off the black West went
Oh, morning, at the brown brink Eastward, Springs—
Because the Holy Ghost over the bent
World broods with warm breast and ah! bright Wings.

The Siege of Dome

In the year 98
A.A. Colony suffered a killing contagion that severely decimated the population. This was the time of the Red Death, and many whom Cynetics had raised up were alive then. These were the Original Ancestors, of whom little is now known, except that they were wise in the ways of Expertise and Machine Lore.

The disease spread despite heroic efforts of the Medico Expertise to contain it. Quarantine measures proved ineffective, and it soon became apparent to the Ancestors that most of Colony would succumb to the Red Death—so termed because of the blood welts that formed on the skin of the victims at the slightest pressure.

I have seen old records which indicate that the Red Death struck with frightening suddenness, producing chills, vomiting, loss of muscular control, slurred speech, lethargy. The eyeballs of the afflicted were said to become red from burst blood vessels in the eyes. Mucus ran freely from nose and mouth, making breathing difficult, and later impossible as the lungs filled with fluid. Victims of the Red Death drowned in their own mucus, choking, gagging, whimpering in agony as each touch brought a new and painful blood welt to swell the skin. Where these welts burst, a vile, suppurating crust formed. But at this stage, the victim was normally comatose and beyond care. Death followed within thirty-six to forty-eight hours of the disease's onset.

In those terrible days one Ancestor in three was taken by the Red Death. The Ancestors knew that for Colony to survive, healthy breeding stock from each Expertise had to be preserved. Those selected for survival were sent out from Colony to live apart in the Hill Country. Others, fearing the disease, attempted to escape by exiling themselves to the wilderness also; but lacking tools and provisions, many of these died from hunger.

In time, the exiles who had managed to live by eating fish and small mammals returned to find less than a fourth of Colony left alive. The surviving population numbered four thousand. Not one of the Original Ancestors survived.

The Ancestors attempted to replace every Expertise, organizing survivors to form the HSCs—Human Survival Cells. Each HSC was dedicated to preserving its own Machine Lore, and in this way each Expertise was preserved—all except one called Biogenics, which many survivors believed had created the Red Death.

It has been said that from this time Cynetics turned its face away from its people, abandoning its children because they fell away from the worship of true spirits. The Cult of Cynetics grew up among the survivors who believed renewed contact with the Divine Spirit would aid them.

The Four Thousand became the Progenitors of old, who reformed Colony after their own desires, vowing that nothing like the Red Death would ever happen again. Thus began the First Age of Empyrion.

Orion Tiberias Treet lifted
his face from the page swimming before his eyes, sat up, and glared around, red-eyed, at the untidy stack of blue plastic notebooks he had been reading nonstop for the last few days. He rubbed his whiskered jaw and stood creakily, began swinging his arms, pacing and stretching to get his blood circulating.

Five days—maybe more, he couldn't tell for sure—in the subterranean Archives of Dome, reading Feodr Rumon's
Interpretive Chronicles,
had given him an ache in his head to match the one in his stomach. He had not eaten since returning to Dome, even though, upon entering the Archives, he had found the provisions he and Calin had left behind on their first visit—a time that now seemed impossibly remote.

The food had long since spoiled, but the water in the sealed jar was good; so he drank sparingly from it and settled down to discover all he could of Empyrion's lost past. He knew he might never have another chance to read the notebooks, and knew, too, that once he left the safety of the Archives, he might never return. Several days of hunger were worth the price.

Upon leaving the Archives he would be a hunted man; so Treet was in no hurry to leave his work. He would have to leave soon, though. Already hunger was making him lightheaded and weak. If he waited too long, he might not have strength or wit enough to successfully elude capture and provide some help to Tvrdy and his allies.

Of course, not knowing what had happened since his escape from Dome, he was at a distinct disadvantage in the strategy department. He assumed the worst. That way he would not be unduly disappointed.

He wondered what he would find when he decided to leave his hidden enclave, wondered whether there had been a Purge, and whether Tvrdy and Cejka had survived or been brought down. Assuming that they had survived, he wondered how to make contact with them, or with anyone else in a position to help him.

These matters he pushed from his mind whenever they intruded, and he forced his attention back to his reading. Old Rumon's
Chronicles
offered a wealth of information to be mined. He had only to pick up one of the ancient notebooks to be transported to some long-forgotten age of Empyrion's past. A past which Treet sincerely hoped would offer a clue as to how he might begin averting the catastrophe he had so clearly seen looming over the future of the planet.

This once-strong hope had turned into a wormy anxiety. For now, having returned, he was far less certain that he'd read the signs of disaster aright. I was so sure of myself before, he argued. Nothing has changed—so why do I doubt myself?

Doubt was a mild word for it. Whenever he thought about what he had committed himself to, snakes began writhing in his bowels.