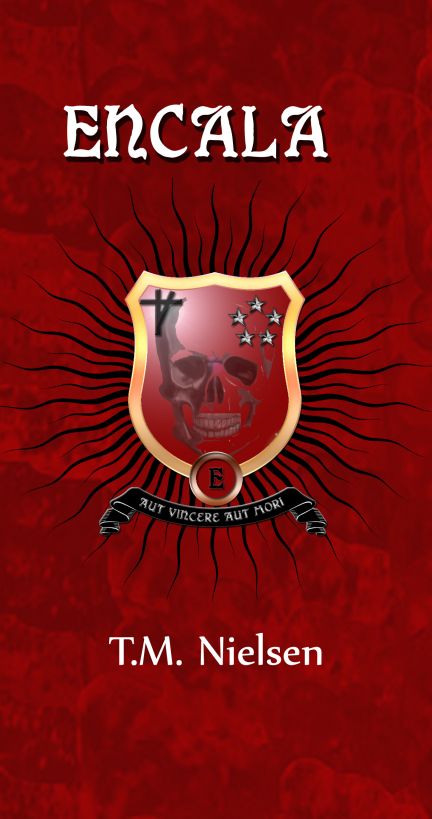 Book 3 of the Heku Series

Published by T.M. Nielsen at
Smashwords

This book is available in
print at
http://www.amazon.com

This eBook is licensed for your personal
enjoyment only. This eBook may not be re-sold or given away to
other people. If you would like to share this book with another
person, please purchase an additional copy for each recipient. If
you’re reading this book and did not purchase it, or it was not
purchased for your use only, then please return to Smashwords.com
and purchase your own copy. Thank you for respecting the hard work
of this author.

“
Want to go out today?”
Emily asked, and took his hand.

She grinned at the name of Allen’s horse. It
had fit when he was an unbroken colt, but now as a gentle stallion,
he was the perfect horse for a small boy.

She led him out to the hallway and frowned,
there were no guards at her door. She knew the Cavalry was out on a
mission and off her bodyguard duty for two more days, but she’d had
random guards posted outside of her door since the Cavalry were
made lieutenants.

Emily walked Allen through the palace,
feeling a sense of freedom. She didn’t pass any heku on her way out
and then she remembered the Council was meeting today. They were
swearing in a new Chief Enforcer, someone named Damon. All she knew
about him was that he was another one of the ‘old ones’ and
Chevalier had known him for a long time.

Emily picked up Allen and threw him onto her
shoulders as he giggled. He loved to ride up there. She walked the
short distance to the stables and looked around, still no heku. The
stable was also empty of horses, except for Patra and Damnit.

Emily slipped a bridle on Patra and let her
out of the stall. She kept glancing behind her as she put on the
saddle, cinched it, and then put Allen up by the horn. Emily
slipped her foot into the stirrup and swung herself up behind him.
She wrapped a hand around Allen’s waist and held the reins with the
other and then clicked her tongue, heading the mare out slowly.

She had seen the rolling hills to the west
of the city, but hadn’t had time to explore yet. She tapped her
heals against Patra and the mare broke into a trot. The city was
quiet during the day. Most of the business was done in the
protection of the night. She could still hear people talking from
behind their doors, and once in a while, she caught sight of a
curtain pulling to the side. She was a little irritated by the
peeking, but knew she was an odd sight for them.

After many turns and several dead ends, she
finally found her way to the green hills. She grinned and broke
Patra into a gallop. She loved the way the wind felt through her
hair, and she could hear Allen laughing. It was good to get the
painted mare out on the open grass. She’d been working hard getting
the Cavalry ready, and hadn’t gotten to stretch her legs in a
while. The afternoon passed slowly as she explored the hillside and
talked to Allen.

As she topped one of the hills, Patra reared
angrily and Emily tightened her grip on Allen. She calmed the mare
down and then saw what spooked her, someone was walking toward
them. She watched as he got closer and her brow furrowed.

“
Emily?” she heard him ask,
and she tightened her grip so hard on Allen that he began to
complain.

“
Tim,” she said, watching
him. She hadn’t seen the man since her time as a prisoner of the
Valle, when he was sent to break the bond she had with Chevalier.
The last time she saw him, he was fading in and out of
consciousness and in pain from her torture.

He stopped a few yards from her and smiled,
“I see you had a boy.”

She nodded and pulled the reins, forcing
Patra to take a step back, “What are you doing here?”

“
For the Equites? What
happened to the Valle?” She didn’t trust him at all.

“
I’m a donor for whoever
needs me. I’m making a call in Council City.” He slid his hands
into his pockets and ran his eyes over her.

“
I suggest you go back
where you came from.”

He frowned, “You aren’t still mad, are you?
That wasn’t my fault! They forced me to do it.”

“
I don’t care who forced
whom, you don’t belong in this city.”

“
Don’t be mad, Emily,
please. I’ve wanted to apologize for a while now, but didn’t know
where to find you,” he said, taking a step toward her.

Emily pulled Patra back another step, “Come
near me, and I’ll have this entire city on you in an instant.”

“
I don’t doubt that. I’ve
heard that your husband became an Elder.”

“
I really cared about you,
you know that right?” He smiled slightly.

“
No I didn’t. They would
take me away until it was time to let you go, I had no say in it.”
He desperately wanted her to believe him.

“
But you knew, the entire
time you were helping them.”

“
So you weren’t trying to
break the bond with Chev?” she asked, raising an
eyebrow.

“
Ok, so maybe… but I cared
about you and I fought to get back to you when you were in
restraints.” He slipped his hands out of his pockets and reached
out for the mare.

He pulled his hands back, “Don’t be like
this. It’s been a long time, and now that I’ve found you, I want to
apologize.”

“
Get lost, you aren’t
welcome in the city,” she said again.

“
I am welcome. I have a
donor appointment with some heku,” he said, taking a step to the
side.

“
I’m pretty sure I outrank
whoever it is your appointment is with, and I say you aren’t
welcome.”

He looked toward the city and then back to
Emily, “Don’t be like that, Em. I won’t be in the city for more
than an hour.”

“
Then what? Return to the
Valle with information on the Council?”

“
Oh right… and I’m supposed
to trust everything you say.”

“
I’m not kidding, go away,
right now,” she warned again.

“
I’ll do what I want. You
may be the wife of an Elder, but you’re still mortal, which means
to them… you are nothing.” He grinned and winked at her.

“
Emily?” she heard from
behind her, and turned just as Tim peered around her.

Tim’s eyes grew wide when he saw the seven
mounted heku. He glanced to the sides, unsure which way to run, but
soon found he and Emily surrounded.

“
Are you ok, Lady Emily?”
one of the Cavalry asked.

“
This man, I know him… he
works for the Valle, even helped them kidnap me once,” she said,
smiling at the terrified expression on Tim’s face.

“
That’s not true! I… well…
ok so I was there… when the Valle had Emily, but I don’t work for
them,” he said, fidgeting nervously.

“
Let’s see what the Elder
has to say about that,” one of the Cavalry said before moving his
horse toward Tim, and slipping out of the saddle.

“
That’s not necessary, I
was just leaving,” Tim told them, moving away from the advancing
heku. Tim felt a strong hand on his shoulder and he gasped,
“Please, I didn’t come to hurt anyone.”

The guard looked at Emily, “What do you want
us to do with him?”

She smiled, “Take him to Chevalier, and see
if he can talk his way out of that one.”

The heku nodded and pushed Tim ahead,
walking back into the city. One of the other heku took the reins
from his horse and the Cavalry followed them. Emily watched them go
and then sighed when they turned around.

“
We’ll need you to come
with us,” one of them called to her.

She figured it was useless to try to get
more time out of the city, and followed them in, talking to Allen
about anything he pointed at.

One of the guards fell back and matched
Emily’s pace, “Where’s your guard?”

She shrugged, “I didn’t have one today,
apparently.”

“
Hey, I don’t need the
attitude,” she snapped. “I didn’t have a guard when I left my room,
so I decided to take Allen out for a ride.”

He nodded, his eyes straight ahead.

“
I suppose you are going to
tell Chev that you found me out here.”

Emily and the guard by her fell behind the
others. She wasn’t in any hurry to get back into the stuffy palace.
When they arrived at the stables, the other horses were put away
and the rest of the Cavalry was gone. She took her time putting
Patra away, and helped as Allen carried the bucket of oats to her
feeding trough.

“
Welcome back,” Sam said,
peering around the corner. Allen ran into his arms.

“
Are we all set for the
training next week, Sam?” she asked, shutting Patra’s
stall.

“
Yes, we are,” he told her,
and threw Allen into the air, catching him as Allen laughed. “We
have those new horses coming in tomorrow.”

She nodded, and then watched Sam and Allen
until she heard the heku clear his throat, “Let’s get inside, the
Elder wants to speak to you.”

She frowned, “I hate that.”

“
What?” he asked as he
ushered her toward the front door.

“
How you all can talk to
one another from far away. It’s kind of annoying.”

He smiled, “It comes in handy.”

She had been so happy out on the open fields
with Allen. Now she was heading in for another round of fighting.
She was tired of fighting with Chevalier. It seemed like all they
did was fight, then make up, and then fight more. She suddenly had
an idea, what if she didn’t fight with him tonight? What if she
agreed she made a mistake and took whatever punishment he doled
out?

Emily smiled, she knew it was perfect. It
would alleviate a fight, yet she knew Chevalier would be skeptical.
The palace door opened ahead of her and she felt the guard right
behind her. He led her to the fourth floor and into the council
chambers. She’d been there once before, but this time it didn’t
seem nearly as intimidating.

All thirteen chairs were filled and she
looked closely at Damon, sitting in what used to be Chevalier’s
chair. He was younger looking, but had dark brown eyes and short,
cropped brown hair. Leonid and Maleth were watching her, smiling,
but Chevalier was scowling. Tim was on the floor in front of the
Council, down on his knees. The rest of the Cavalry stood around
the walls, and the one with her moved into position beside
them.