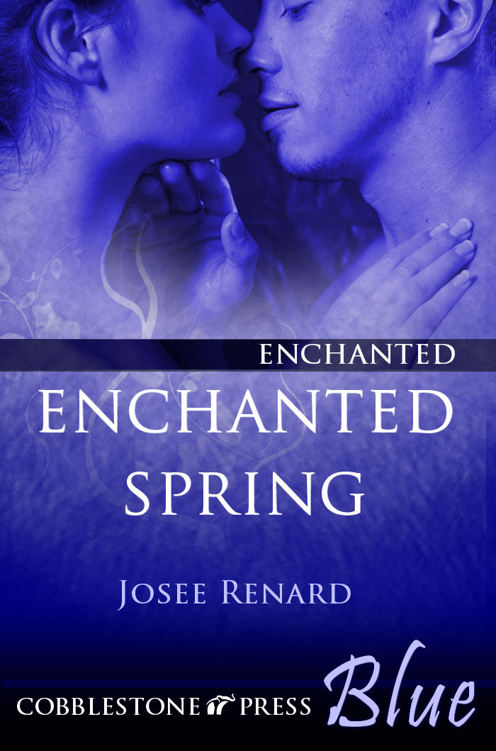 “Damn, damn, and damn again,” Delia chanted. All the other matchmaking Web sites made money and they didn’t even have
real
magic to make their matches.

She’d convinced the other two—her mother and her aunt—to invest their tiny savings in the start-up. Her mother Deborah and her aunt Dorothea lived in the house next door to Delia and had taken in a boarder to help with taxes and maintenance.

Despite her concern over MatchMagic, Delia also considered the problem of Deborah and Delia’s boarder, Connie. Connie had lost her job, and it was pretty clear that she’d soon be giving her notice. There had to be something they—meaning MatchMagic—could do to keep her around.

Delia figured it was time to go with the old adage
It takes money to make money
. They needed someone to help them sell the services of the Web site.

Oh, their clients were completely and utterly satisfied. The magic
always
worked. But it was the getting, rather than the satisfying, that caused them problems. And she knew exactly who could help.

They could hire him to do some promotion for them—it was, after all, his job. And, as a special thank you, they could help the strait-laced man next door find his true love.

Jamieson—his mother had called him that, without once shortening the name, ever since he could remember—wasn’t sure what his next-door neighbors wanted with him, but his mother had also instilled in him a set of very pretty manners, so when they’d asked him to tea, he’d said yes.

The main floor of the brilliantly painted Victorian next door wasn’t at all how he’d imagined it to be. He’d pictured colorful wallpaper, and little-old-lady chairs, and tables filled with knick-knacks.

What he found was a modern office space, half a dozen computers humming, a huge air conditioning unit, stacks of pamphlets and letterhead, a sign proclaiming
MatchMagic.com
, and three of the women he’d seen coming and going from the two Victorian houses next to his, sitting in red leather chairs around a small boardroom table.

“Please,” the youngest one said. “Sit and have some tea. We have a proposition for you.”

“I’m Jamieson Smith,” he said, a tiny question embedded in the statement so they’d tell him their names.

The oldest one spoke. “I’m Dorothea.” She pointed at the woman next to her. “This is my sister, Deborah. She’s Delia’s mother,” she added, gesturing at the youngest one.

Jamieson kept his grin to himself. He liked older women. His mother had been almost forty when he was born, and he’d grown up with her and her older sister.

So the three D’s, as he immediately named them, were right up his alley, and he set himself to make them comfortable, asking first about their houses and what they’d done to restore them.

Their faces lit up as they talked about the staircases they’d redone, the stained glass windows they’d found in thrift stores, the great workmen they’d found to help with the floors.

Jamieson wanted to ask for a tour, but that could wait until he knew what they wanted with him. He knew Delia’s daughter Tonia had just moved in with James and Jeff, the two men who ran the coffee shop down the street, so they weren’t trying to fix him up, though the
MatchMagic.com
sign had him a little worried.

Blunt, he thought, would work best.

“What can I help you with?” That would get the meeting back on track—whatever track it was they had set out on and that he’d derailed them from with his question about the houses.

“MatchMagic is a dating Web site,” Delia said. “We’ve been up and running for a year and, even though 100% of our clients have been completely satisfied, we don’t seem to be getting enough new ones to make it work for the long term.

“We thought you might be able to assist us with some promotional ideas.”

Jamieson looked again at the sign on the wall and at the women around him, and said
yes
without really thinking about what that might entail. He could figure out a way to make their lives easier—even though, at this point, he didn’t have a single idea; if there was one thing he hated, it was romance. Still, because they reminded him of his mother and aunt, he’d figure something out.

An hour later, he was walking in the front door of his house, shaking his head at the idea of Jamieson Smith working on a dating Web site. Oh, sure, he went out with women, had sex with them, even, occasionally, spent a weekend with one. But there were rules to which he faithfully adhered:

Never use the word
love
.

Never date the same woman more than three times, that being the magic number when they wanted
more
than sex.

Never get involved with a romantic.

The rules had helped him stay single in the past, and they would help him stay that way in the future. He
liked
it that way.

Losing her job hadn’t been a surprise, just the timing. She’d expected to have another six months before the place imploded. She’d seen it coming, had even started to update her resume and make a list of the businesses she might apply to, but she’d been shocked and—she had to admit—scared to death when she’d arrived at the office
six weeks ago to find the doors locked.

Peering in the windows had shown an empty space with only electrical outlets and faded spots on the carpet to indicate that a thriving—okay, maybe not
thriving
, but surviving—business had once been there.

They’d owed her so much vacation pay that she knew she’d never get even a quarter of it (no time to take a vacation working for those guys), a month’s back pay (
There’s a big check on its way and we’ll pay everybody when we get it
), and the current month’s pay. She’d also figured out they hadn’t paid any of their employee taxes for months, which meant her medical was going to run out in a week and she owed the IRS money she didn’t have.

God, could it get any worse?

Well, yes, it could. Because her rent was due in a few days, and she didn’t have it, and she didn’t have a chance in hell of getting it. With the economy a disaster, it was taking three to six months to find a job, or so said every one of the employment agencies she’d trekked around to in the past ten days.

She was going to have to settle for a service job, at least for now. So she’d spent the morning on her laptop revising her resume to ignore the years she’d spent working her butt off as a technical writer, and emphasize the years she’d spent cleaning, making beds, doing laundry, cooking, serving, taking reservations, solving problems, and just about anything else needed helping her mother run a ten-room family hotel aka bed and breakfast.

Gratitude
, that’s what she needed.

Connie should be grateful for those credentials, knowing they’d ensure she got a job in some hotel, bar, restaurant or coffee shop in the city. As long as, of course, they were looking for someone.

Time to get out there and walk the streets.

After she told Deborah and Dorothea that she was going to have to leave.

Connie loved the old Victorian, loved her suite of rooms tucked up under the roof, the bathroom with the big clawfoot tub and skylight, the bedroom where her bed just fit under the sloping ceilings, the combined kitchen and living room with the old-fashioned fireplace and the windows overlooking the city.

And she loved her landlords. They made her smile, made her think, even made her feel as if she was, in some small way, part of the family. They invited her to dinner with their daughter Delia, who lived in the house next door. They brought her homemade jam and asked about her day.

But subtle they were not.

Except they had been ever since she’d stopped going to the office. They hadn’t asked her a single question about why she spent all day in her rooms, or why she always looked perfectly groomed and never went anywhere. Ever since she’d moved in, they’d grilled her almost every day about what she’d done, who she’d seen. And they were passionate followers of her non-existent love life. But now? They didn’t ask. About anything.

Damn. She hated to leave this place, but she was going to have to downgrade big-time. A different neighborhood, a one-room apartment that suited her new life as a minimum wage employee in a hotel or coffee shop.

Dorothea and Deborah had been waiting weeks for Connie to tell them what had happened. They’d decided early on not to ask her, to let her come to them, but they’d had enough and were waiting in the front hallway to ambush her. They knew she’d lost her job, and they knew just what to do to fix it.

They weren’t witches for nothing.

“Connie?” Dorothea called, as her favorite tenant and the woman she’d come to think of as family tried to sneak down the stairs.

“Dorothea?” Connie squeaked, then paused, her face somber. “I was coming down to see you.”

Dorothea listened with her heart rather than her head and knew exactly what Connie was coming to tell her. She forestalled
that
conversation with an idea she and Deborah had conceived after speaking with Jamieson Smith. “Good, because I’ve got something I’d like you to consider.”

Connie twisted her hands in her lap. No service job was going to pay her enough to stay here, to pay her back taxes, to go back to the life she’d had just six weeks ago. She had to tell Dorothea the truth.

Holding out the letter with her notice and apology, she tried to hide the tears that welled up in her eyes.

Dorothea waved off the letter. “You’re not leaving,” she said, with a quick glance at Deborah, and Connie wondered yet again whether the women had a touch of the sight, because otherwise, how the hell did they know what Connie was going to say?

Half an hour later, Connie had a new job helping with some promotional work they were having done—at least they thought she did—and a reduction in her rent. And nothing she’d done or said could sway the two women.

She’d been drooling over him since she’d moved onto Courtwood Street, even knowing she’d never have a chance with him. The women—the many, many women—he dated? They looked like runway models.
Rich
runway models.

But what choice did she have? If the sisters had their way, she was going to be working with him on a promotion campaign for MatchMagic and, from the martial look in Dorothea’s eyes, Jamieson Smith would have no choice about hiring her. Didn’t matter how tough he was, no one could deny the sisters.

Bridesmaid Blitz by Sarah Webb
Un manual de vida by Epicteto
Losing Myself in You by Heather C. Myers
A Bloody Kingdom (Ruthless People Book 4) by J.J. McAvoy
Love Me for Me by Jenny Hale
Die Buying by Laura DiSilverio
All I Want Series Boxset, Books 1-3: All I Want for Christmas, All I Want for Valentine's, All I Want for Spring by Clare Lydon
What Stays in Vegas by Adam Tanner
Beautiful Ruins by Jess Walter
Primates of Park Avenue by Wednesday Martin