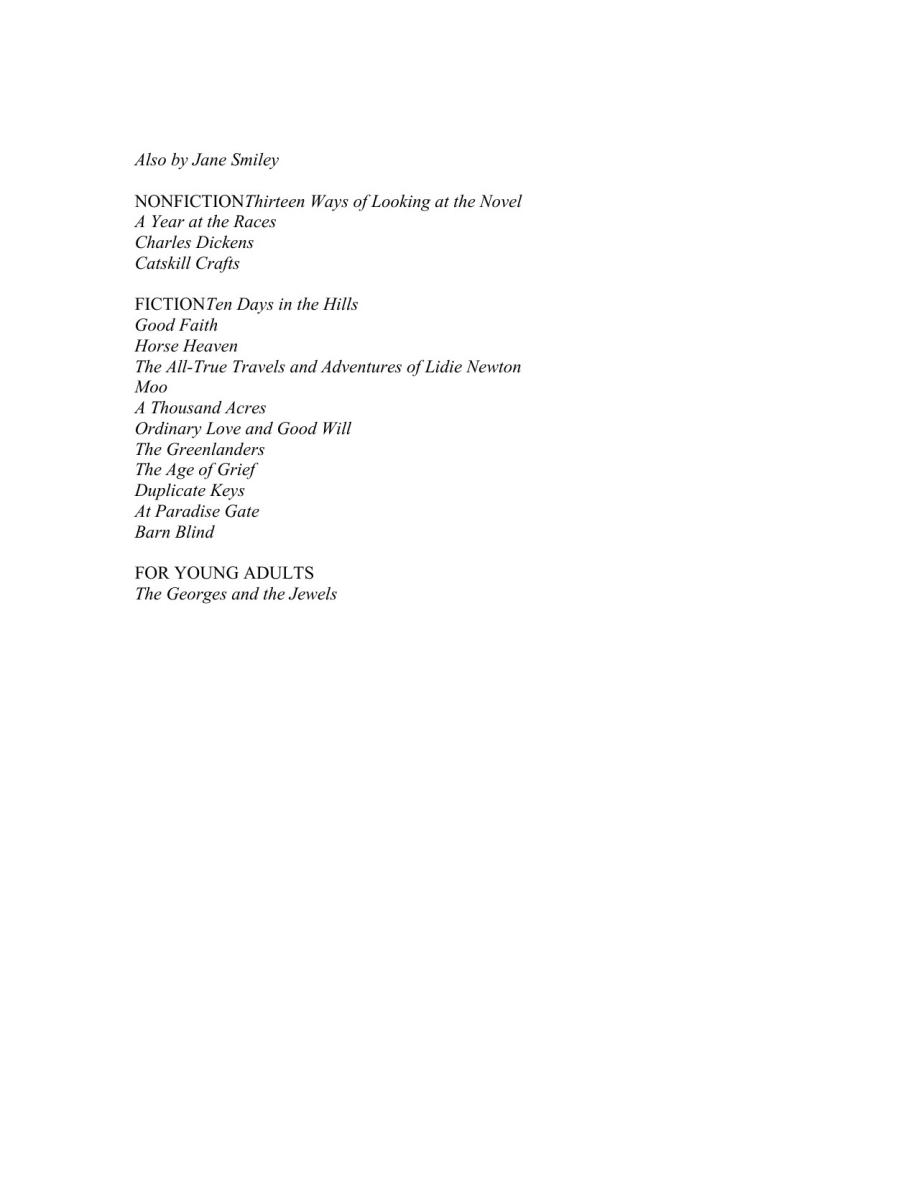 NONFICTION
Thirteen Ways of Looking at the Novel

A Year at the Races

FICTION
Ten Days in the Hills

The All-True Travels and Adventures of Lidie Newton

Ordinary Love and Good Will

The Age of Grief

The Georges and the Jewels 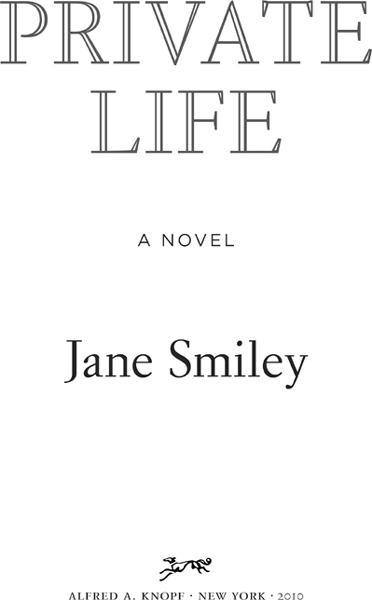 In those days all stories ended with the wedding.--ROSE WILDER LANE,
Old Home

STELLA, who had been sleeping in her basket in the corner, leapt up barking and then

slipped out the bedroom door. Margaret heard her race down the stairs. It was early; fog

still pressed against the two bedroom windows. Margaret sat up, but then she lay back on

her pillow, dejected--she must have missed a telegram, and now her husband, Andrew,

had returned. She woke up a bit more and listened for the opening of the front door. But,

no, there hadn't been a telegram--she remembered that she'd looked for one. Had she not

locked the front door? She stilled her breathing and listened. With the war on, all sorts of

characters crammed Vallejo these days. Suddenly a little frightened, she slid out of bed

and stealthily pulled on her robe, then opened the door of her room a bit wider and crept

out far enough to peer over the banister. There was the top of a head, dark, not Andrew's,

and by the dull light of the hall windows, a houndstooth jacket. A figure bent over to pet

Stella, and Stella wagged her tail. This was reassuring. Margaret took a deep breath. Now

the figure stood up, looked up, and smiled. He said, Put your clothes on, darling, we're

going for a ride.She was speechless with pleasure at seeing Pete, though he seemed to

have walked right in--did that mean she had left the door unlocked, because how would

he get a key? But getting ready took her no time, she made sure of that. She only brushed

out her hair and redid her bun so that some of the gray was hidden, then got out her best

blue suit with the white pique collar and her last pair of hose and her nicest shoes. She

put on the black straw hat with a half-veil, and she looked neat, she thought, though no

better than that--at her age, you could not hope to look pretty, and she had never been

beautiful. When she reached the bottom of the stairs, Pete smiled and kissed her on the

cheek. She confined Stella in the kitchen and made sure the dog door to the backyard was

unlocked. Then he led her to his car, which she hadn't seen, a Buick, prosperous gray and

very clean. She said, Where are we going?Somewhere you've been before. But that was

all he would tell her.Margaret had heard nothing from Pete in four months, not since their

last agitated phone call two days after Pearl Harbor. Before that, she had seen him every

couple of weeks. In the interim, either he had gotten old, or she had forgotten how old he

was, because now, as they drove and she glanced at him, she saw that, yes, his hair was

dark (that had never been natural), but his face was more wrinkled than hers, and spotted

here and there. His teeth were yellow and a little crooked. It crossed her mind that maybe

Cossacks weren't meant to live this long. Then she noticed her own hands, with their

wrinkles and spots, and wondered what he must think of her. She would be sixty-four this

year, and he would be--well, she didn't know for sure. But she adored him anyway, with a

feeling that defied these meditations on the passage of time (did she adore him, or simply

admire him, or how else would she describe her feelings was a question she often

pondered). She looked at him again--square in the jaw, hawkish in the nose, kind,

mysterious, not like any other man she had known. He didn't ask her about Andrew, and

been all these months.War again meant Vallejo was bursting, cars and trucks backed up

and honking everywhere. When they got out of town--onto the 37, around the north shore

of the bay--traffic was still slow, but the sun came out and the car warmed up. They made

idle conversation--How was she feeling? When did he get the Buick? The weather had

been sunny lately, hadn't it?--but she understood that important topics were to wait until

the purpose of their trip was revealed. And the drive was especially pleasant because she

had not been out of town, and hardly out of the house, since the attack. Everywhere, the

grass was thick and green from the winter rains, and the air was extra bright because of

the way that the sunlight shot through and was reflected off fluttering veils of fog. When

they turned south, toward the city, the mountains seemed to almost impinge on the

highway, they were so black and forbidding, but the waters of the bay seemed to sparkle,

and then the fog receded, and they were on the Golden Gate Bridge. The sun shone on it;

the cables swept upward to two peaks, and the road rose and curved between them. In the

middle of the bridge, the waters of the Pacific spread away in two dazzling directions,

deep dark blue, but ablaze with light. And then they were over, and the verges of the

highway were green again until well into the city. Pete turned south on Van Ness and

kept going. Houses and warehouses gave way to fields and marshes, and then houses and

warehouses resumed. When he turned in at the entrance to Tanforan, she was pleased for

a moment, and then she remembered that Tanforan was no longer a racetrack but a

relocation center. It dawned on her. She said, Pete! You found them! She reached across

the seat and took Pete's hand. He gave hers a squeeze.In that moment, the racetrack

vanished before her eyes. The orderly place it had been once, with horses passing here

and there, and people walking purposefully or filling buckets or rolling bandages or

raking walkways, gave way to high fences with guards outside them (armed), and milling

groups of people inside them, not orderly or purposeful, but a melee--too many people,

no horses, everything and everyone in a state of restlessness.They were allowed through

the entrance and directed to park to the left, in what was apparently a small visitors'

section. This, too, was fenced off. Pete came around and opened her door. She said, I'm

so glad you brought me here.They asked for you.Have you been coming here?I found

them last week. This is my third visit. Since I'm not a family member, it might have to be

my last. I know one guy--one guy only--and he's not in the army, and the army runs

things here.He took her elbow. In his other hand, he carried a bag, but she couldn't tell

what was in it.The stalls had become makeshift rooms. All the doors were open, because

the stalls had no other windows--if a door were closed, there would be no air, except,

perhaps, through the cracks in the plank walls. She couldn't help staring as she went by

(smiling, of course, in case anyone looked at her). The walls in the stalls had been

whitewashed, but badly--nothing had been done underneath the whitewash to repair

scrubbed down. But every stall was full--hanging clothes, suitcases, boxes, people,

chairs, beds, little tables. They walked down one aisle, came to a cross-aisle, turned left,

walked three more aisles, turned right at "Barn H." People looked at them as they passed,

Howdy! in unison, and then went into a fit of giggles. She smiled at them, sorry she had

nothing for them. Left again. Pete paused, looked around. Now they were at the far end of

Barn G. He said, I thought they were here, and stepped back and looked up. Then he

stepped forward and peeked over the half-door. Behind him, she peeked, too. There, on

the back wall, was a painting of Mr. Kimura's that she recognized, a pair of finches, one

perched on a railing and the other below, perched on the rim of a small bucket, drinking

from it. The stall was neat, or as neat as it could be, but, like the others, it was full of

things. The Kimuras had never lived grandly, and over the years the neighborhood in

Vallejo where they had their shop had sometimes been quite wild, but the sight of the

painting hanging here suddenly struck her in a way that the whole scene had not yet. She

gave a little gasp and said, This is unbearable!At least they have a whole one to

themselves. Some families are crammed in two to a stall.You lived in a stall.As a lark. Or

if I wanted to sleep later than four in the morning.She felt the rebuke.But neither Naoko

Kimura nor her mother, Kiku, appeared. The people in the two neighboring stalls smiled

but didn't speak. Pete opened the stall door and set the bag inside.I don't like this.Why

not?Because, when I was here two days ago, Kiku was quite ill. If she's up and walking

around by now, I would be amazed.Leaving her to assimilate this alarming news, he

there. He came back in a hurry.We have to go to the infirmary, which is next to Barn V.

That's across the compound. He says she went over there yesterday morning. They

carried her on a stretcher.But, Pete, what has been happening? Where have they been?

The Old Vengeful by Anthony Price
All of These Things by De Mattea, Anna
To the Grave by Carlene Thompson
The Stillness of the Sky by Starla Huchton
The Hunted (Guild of Assassins Book 1) by Shannan Albright
Bluenose Ghosts by Helen Creighton
Haunted by Your Touch by Frost, Jeaniene, Kohler, Sharie
Simon Says by Elaine Marie Alphin
Trail of Feathers by Tahir Shah
Daniel Martin by John Fowles