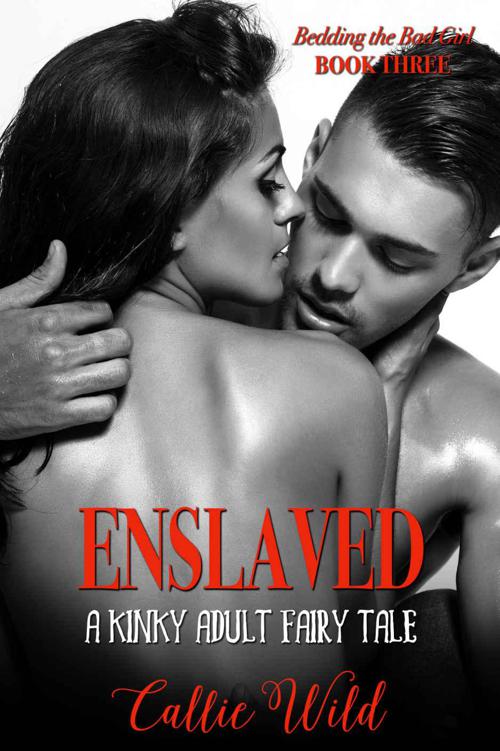 A spell gone wrong has some sexy consequences…

He’s a hot, single king who knows his way around the bedroom. She’s an innocent fairy who has accidentally cast her first love spell. Together they generate enough heat to set a castle on fire.

Aaron and Calliope team up to save his lovesick brother and a sleeping princess from an enchanted keep, but along the way realize their own love is an illusion. Can they find their way back to each other in time, or will Calliope end up taking the sleeping princess’s place for all eternity?

A sexy, stand-alone continuation of Sleeping Beauty. No Cliffhanger.

All rights reserved. Without limiting the rights under copyright reserved above, no part of this publication may be reproduced, stored in or introduced into a retrieval system, or transmitted, in any form, or by any means (electronic, mechanical, photocopying, recording, or otherwise) without the prior written permission of the copyright owner. This erotic romance is a work of fiction. Names, characters, places, brands, media, and incidents are either the product of the author’s imagination or are used fictitiously. The author acknowledges the trademarked status and trademark owners of various products referenced in this work of fiction, which have been used without permission. The publication/use of these trademarks is not authorized, associated with, or sponsored by the trademark owners. This ebook is licensed for your personal use only. This ebook may not be re-sold or given away to other people. If you would like to share this book with another person, please purchase an additional copy for each person you share it with, especially if you enjoy hot, sexy, emotional novels featuring Dominant alpha males. If you are reading this book and did not purchase it, or it was not purchased for your use only, then you should return it and purchase your own copy. Thank you for respecting the author’s work. This book was previously published as Beauty Sleep by Anna J. Evans. It has been extensively revised and reworked before being re-released. Cover design by Bootstrap Designs.

Calliope jerked awake on the cold stone floor of her cell, sending the rodent nibbling at her fingertips scurrying back to its burrow in the wall.

Her hand flew to her chest, where her heart did its best to burst through her ribs.

She wasn’t too late—thank the Goddess—but it was only a matter of time. Sooner or later, she would sleep too hard and the rats would have their pound of flesh. The guard who brought her meal each evening had joked that no one came out of the dungeon with as many toes as when they went in.

As soon as he’d left, Calliope had torn the sleeves off of her nightdress and wrapped them around her feet, hoping to keep her cellmates from getting any ideas. She was colder without the sleeves, but the trade-off seemed worth it.

“Cold arms, safe toes,” she muttered, wincing as she rolled to her side on the stones, feeling every bruise she’d acquired in the past two weeks of bedding down on the floor in her flimsy gown.

But she hadn’t bothered feeling sorry for herself.
Of course
she hadn’t been abducted from her home during the daylight hours when she would have been wearing shoes
and
warmer clothes. It was the story of her life. Misfortune was as much a part of her existence as her magic—as inseparable from her as her skin and bones.

She had learned to live with her own bad luck. She hadn’t learned to live with the pain her magic so often caused others. She regretted every spell gone wrong more than she could say. And so a part of her felt she deserved to be thrown in the King of Outer Kartolia’s dungeon and left to rot while the king was away in Kingdom City.

She would begin to rot soon—or at least to fester and lose the last of the color in her skin. She had been given one meal a day and the luxury of a cold shower the day before yesterday. Other than that one trip to the dungeon’s bathing room, however, she hadn’t been out of her cell for fourteen days.

But surely she was still better off than Rosamund. Poor Rosamund, trapped in an enchanted castle, destined to sleep her life away until a prince outsmarted the castle’s defenses and freed her with a kiss and a proposal.

Sadly, even the spell-modification Calliope had made in an attempt to fix her first spell was a nightmare.

And Rosamund will actually have to agree to marry this man in order to gain her freedom
.
What were you thinking
?

“I was very young, and had read too many fairy stories,” Calliope spoke aloud to the walls. “I was only seven when Mother asked me to gift at Rosamund’s birthday celebration.”

The stones were quiet, cold, silently condemning both her and her mother.

“But in Mother’s defense,” Calliope hastened to add, “she had no way of knowing my affliction until it was too late.”

The “affliction.” That’s what her mother had called Calliope’s rotten luck with magic, but it had all too often seemed that she was talking about Calliope herself. The “affliction” forced them to move to the most unpopulated regions of Outer Kartolia to prevent Calliope from doing injury to other children with her magic. The “affliction” drove Calliope’s father away, causing her mother to die alone and friendless except for her only child…a talentless daughter, her own “affliction” to bear to the end of her days.

“But I haven’t cast a single spell since Mother’s death. Mother was the one who refused to give up on my magic. I never cared.” Calliope walked slowly around the circular edge of the cell, dragging her fingers over stone, then bars, then stone again, imagining that she was talking to the animals on her farm. They would be a kinder audience than the dungeon walls.

She had lived alone for nearly five years now, just her, the pigs, the goats, the geese and a cat or two who preferred to keep the relationship casual except during feeding time. It was odd, she supposed, but if she hadn’t started talking to the animals, she would have gone mad. Just as she would run mad in this dungeon if she didn’t find something to occupy her mind.

Wouldn’t need to occupy your mind if you had the power to free yourself.
Her mother’s voice echoed in her mind, as harsh and disappointed as it had been in life.
Without your fairy magic
,
you
’
re no better off than a human
.

No better off than a human—truly a fate worse than death to Heliotrope La Fae.

He was gone within a month of receiving the gift, off to take the world by storm and forget he’d ever been saddled with a wife and child.

“It
was
terrible, but just one man’s terrible. There are humans who are kind.”

Humans will rip your heart from your immortal chest and stomp it to bits on those stones if you let them.

Compared to them we are. We are ancients. We should be their gods.

Calliope squeezed her eyes shut.
She had to put a stop to this before the line between the real world and the imaginary one grew too blurry.

“You’re not really here.” Calliope turned away from the voice. “I’m not going to listen to you anymore.”

You always were a liar
.

“
You
are the liar!” She took a deep breath, trying to compose herself. “We aren’t immortal. We die.
You
died. You aren’t—”

Silence
,
Calliope
.
If you can
’
t say something sensible
,
don
’
t say anything at all
.

“I
am
being sensible.”

Calliope staggered back, the force of the shout inside her head seeming to knock the world sideways.

She shouldn’t have engaged the voices. She always ended up frightening herself, even when she wasn’t locked in an awful place with the sounds of claws on stone waking her in the middle of the night.

Her mother was dead, but the animals on the farm loved and needed her. She had to hold it together for a few more days. Then surely the king would hear of her plight. The King of Outer Kartolia was merciful and kind. Calliope had never met him, but she’d seen the pictures of his coronation pasted to the billboards in the village close to her farm. She and the other village girls had giggled together about how handsome he was.

Surely such a handsome, compassionate-looking king would understand she hadn’t meant to—

Idiot
.
You were born an idiot.

My fault for cursing you with a human father
.

“I am finished with this conversation. You aren’t real.” Calliope pulled back a foot and kicked the stone beside her—hard.

“Ouch!
Ouchouchouch
.” She cursed, but the pain had the desired effect. Her mind cleared and the spark of hope within her grow stronger.

The king
was
kind and he would set her free, even if his younger brother had fallen victim to Rosamund’s enchanted castle. Prince Johann should never have gone to the castle. Everyone knew that it let princes in, but never let them out again. Johann wasn’t the warrior his older brother was. He should have known better than to—

Know better than to enter a place cursed by a freak.

Calliope pressed her hands to her ears, sinking down to the floor with a moan. She couldn’t fight it anymore. The voice in her head was too strong and she had been too long without her herbs. She had begged the king’s guards to let her take her medicine with her, but they’d refused.

And now she was alone, trapped in the dark, with the voice that had always been the cruelest of those that spoke in her mind—the harsh imitation of the mother Calliope knew she had disappointed beyond all reason.

You aren
’
t just a disappointment
;
you are an abomination
.
Always have been; always will be
.

“Please. Please…” Calliope ran a trembling arm across her face, smearing the tears running down her cheeks.

How dare you beg for mercy when you
’
ve given up of your own free will
?
What kind of fairy are you
?
You have magic, use it!

Then I suppose you will die, Affliction
.

The Bunk Up (The Village People Book 1) by D H Sidebottom, Andie M. Long
Bluestar's Prophecy by Erin Hunter
The Three Weissmanns of Westport by Cathleen Schine
Daylight Comes by Judith Miller
Knock Me for a Loop by Heidi Betts
Twelve Across by Barbara Delinsky
Bodychecking by Jami Davenport
Hidden Ability (Book 1) by Aldus Baker
Kristy and the Mother's Day Surprise by Ann M. Martin
The Indigo Notebook by Laura Resau