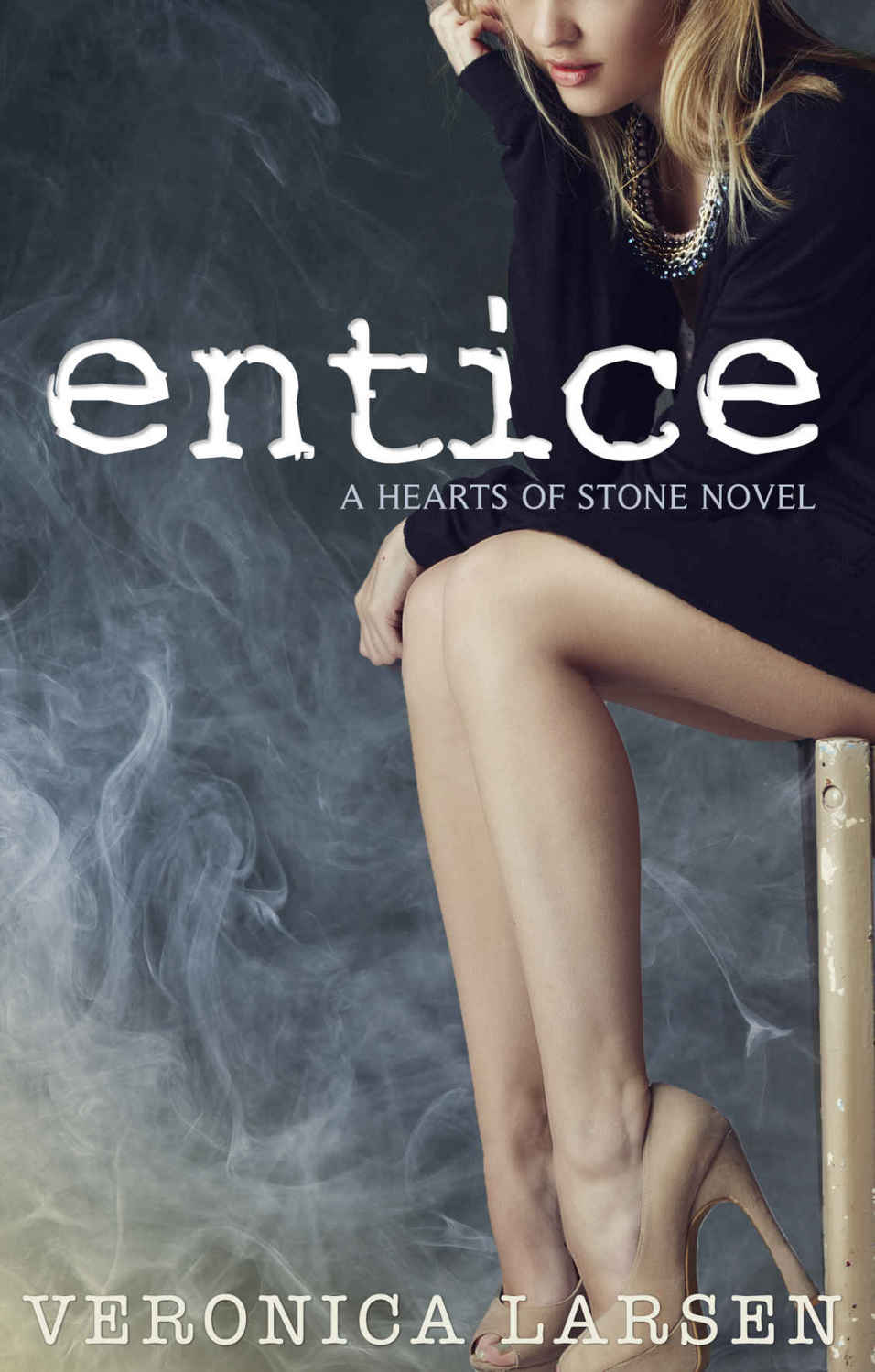 All rights reserved. No part of this publication may be reproduced, distributed, or transmitted in any form or by any means, including photocopying, recording, or other electronic or mechanical methods, without the prior written permission of the publisher, except in the case of brief quotations embodied in critical reviews and certain other noncommercial uses permitted by copyright law. For permission requests, email the publisher.
This is a work of fiction. Names, characters, businesses, places, events and incidents are either the products of the author's imagination or used in a fictitious manner. Any resemblance to actual persons, living or dead, or actual events is purely coincidental.

This novel is for Ariane.

For your courage, humor, and grace.

Note from the author:

While this novel can be read as a standalone, please keep in mind some of the events following the prologue occur at the same time as the last few chapters of Book 1. Because of this, Entice will include major spoilers to
.

Music and laughter trickle past the open door, dissolving into the air as I peer outside, hesitant. The night is colder than I anticipated. There's an uncomfortable chill that probably has less to do with the temperature and more to do with the way my palms have grown sweaty.

I scan my surroundings, but the front steps are empty, stained dark from the rain. As my ears hone in on the noises outside versus those of the prom celebration behind me, my stomach sinks.

I'm sure I saw her slipping out, the flash of a pale yellow dress as a figure disappeared down the hall like she hoped no one would notice.

I wasn't fast enough to catch her.

Fingers still wrapped around the edge of the door, holding it open, I take one last look around before turning to go back inside. I freeze mid-step when a soft sound reaches me. An intake of breath or maybe a sniffle.

She's standing a few feet away, back pressed to the brick wall of the building. Her arms are crossed behind her back, her head is bowed, and her shoulders, bare in her strapless dress, curved slightly inward.

The only indication she hears me is the way she turns her face away, a strand of her light-brown hair falling over her cheek as she does so.

I swear, she looks like an angel. Her smooth skin glows in the night, like she's absorbing the light from the nearby lamppost and, in the process, dimming everything around her.

A lump forms in my throat at the silence that follows. And though I let the door close behind me, I can't seem to figure out what to do next.

I didn't have a plan when I followed her out here. She doesn't know me. We've never talked. I just…I hated to see her go through that. The way that asshole humiliated her back there, in front of the entire school. She wasn't exactly a pushover. The things she yelled back made everyone fall quiet. Then she stalked off, head held high, toward the bathrooms.

Voices rippled around as everyone who witnessed the fight immediately started their petty gossiping. But not me. I stood there watching the entrance of the bathroom. Waiting for her to come back out, wanting to know she was okay.

And now she's here, angling away from me, not wanting me to see her face, which is probably streaked with tears.

"I'm fine," she snaps, hurrying forward to sit on the steps, her back to me.

The urge to sit beside her is overwhelming, but she doesn't want to talk to me. Why would she? She has to think I'm some random guy trying to take advantage of her newly-single status.

That's not why I'm out here, at all. I'm out here because…because I want to hear her voice. I want to hear it directed at me for the first time. I want her to look at me, to
see
me, and know I'm not like that asshole in there. Know I'd never talk to her the way he did.

She shivers and I get the odd sensation of the cold creeping up from the cement and seeping through the thin material of her dress.

Stripping off my suit jacket, I hang it over her shoulders. She takes in a sudden breath and her eyes lift to meet mine. I try to speak but nerves wrench my stomach tight. All of her light is contained in those green orbs, and for the very first time, they're fixed on me.

I don't care about the black streaks of makeup running down her face, she's the most beautiful girl I've ever seen. I've thought so all this time I've watched her from a distance. But up close, she makes it impossible for me to form a coherent thought. Shifting away again, she brings a hand to the side of her face. She doesn't want me to see she's been crying. Right when I find the courage to say something else, the door behind us bursts open and her friends descend on her in a flood of words.

"
Jonathan's such a fucking jerk
."

I pull back as they surround her, displaying their concerns in various degrees of back patting and hair smoothing. She keeps her head down despite their questioning, not wanting her friends to see her face.

One of the girls snaps up at me. "Why are you lurking around like a creep? Go away."

Responding would be a waste of my breath. Anyway, I'm just glad Emily isn't alone anymore. Though her friends may be an obnoxious bunch, they seem to care about her.

Going back to the crowded dance, I try to ignore the blaring music. Try to hold on to the scene replaying in my mind: her eyes on me, my jacket on her. It's an image that I wish I could print out and hang on my damn wall.

A few minutes later, Emily and her friends come back to the dance but she disappears into the bathroom again with two of the other girls following closely behind.

I'm getting a headache from the music, as I attempt to block it out and focus on just one thing.

The first time I noticed her was during the fall assembly my sophomore year. The auditorium was packed tight with students and tense with the awkwardness of a new school year. Principal Warner's voice droned on, monotone, nearly putting me to sleep. He asked the crowd a question, which, not surprisingly, was met with silence. Until Emily piped up from her seat. She was a freshman, though she didn't act like one. Her raspy voice, dripping with sarcasm, drew everyone's eyes to her.

I didn't catch what she said, but it was funny enough to bring laughter rolling up the rows of seats to reach me. Her mischievous smile was what captured my attention before the rest of her did.

From then on, it was impossible not to notice her. How her confidence was simultaneously too large for her frame and yet tailored to her body. How her personality walked before her, breaking up crowds in the hall, people parting to let her through, like they were all trained to the same subconsciously choreographed move.

I should've known it was all too exaggerated to be real.

One day after school, I was in the middle of my shift at the diner when the sound of her voice trickled through the kitchen's open door. I froze, a plate slipping from my hand and sinking into the soapy water. No one from our school ever came into the diner. It was notoriously filled with a gray-haired, stuffy crowd.

I peeked around the doorframe until she came into view, sitting on a stool in mid-conversation with my father as he wiped down the counter. I barely recognized her. This was a different Emily. Visibly bare of her bravado, like she'd pulled it off and thrown over the back of the chair. A coat she didn't need while she was telling my father she didn't want to go home, that things were getting worse for her there.

I don't know what shocked me more. Seeing her talking so candidly with my father, or seeing her look so sincere. And genuine. And vulnerable. Her eyes flitted in my direction but I ducked back into the kitchen.

The damage was done. For me, anyway. I couldn't stop thinking about her after that. It was like glimpsing into another world. A world where the most arrogant, most beautiful girl I knew revealed herself to be someone else altogether. Someone that clawed at my damn heart. Someone I was dying to talk to.

I asked my father about her, as casually as I could. He said she stopped in every morning before school. If he saw the shock on my face, he didn't let on. I was glad Emily rarely came in during my after-school shifts. Because the times she did, I couldn't stop myself from eavesdropping on their conversations.

And I hated myself for it.

Drums erupt from the speakers as the music switches abruptly, reminding me where I am. Standing still as a statue, staring at the bathroom door in hopes of catching sight of her again.

For what? It's not like I'll be able to talk to her again tonight, not when she's constantly surrounded by her snotty friends.

Nephilim by Sammy King
Necropolis by Santiago Gamboa
The Girl On Legare Street by Karen White
Metamorphosis by Erin Noelle
The Presence of Grace (Love and Loss #2) by Anie Michaels
Rock Chick 04 Renegade by Kristen Ashley
EllRay Jakes is a Rock Star! by Sally Warner
California Gold by John Jakes
Palm Beach Nasty by Tom Turner
The Adept Book 2 The Lodge Of The Lynx by Katherine Kurtz, Deborah Turner Harris