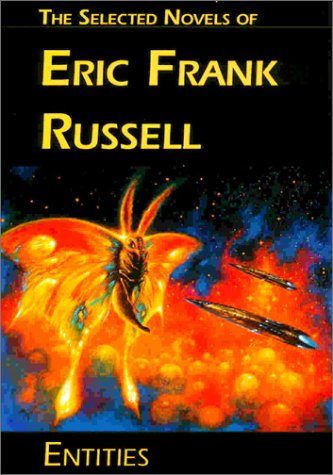 ALL RIGHTS RESERVED. NO PART OF THIS BOOK MAY BE REPRODUCED IN ANY FORM OR BY ANY ELECTRONIC, MAGICAL OR MECHANICAL MEANS INCLUDING INFORMATION STORAGE AND RETRIEVAL WITHOUT PERMISSION IN WRITING FROM THE PUBLISHER, EXCEPT BY A REVIEWER, WHO MAY QUOTE BRIEF PASSAGES IN A REVIEW.

The introductions to the novels by Jack L. Chalker are original to this volume.

Editor’s Introduction by Rick Katze is original to this volume.

Four years ago I started a project to put Eric Frank Russell back into print. Last September
Major Ingredients
which contained 30 stories of the best short fiction of Eric Frank Russell was published by NESFA Press. At that time I indicated that there was still more that should be back in print. I learned a lot doing the first book. Thus it only took one year for this book to be produced.

It contains five novels, an introduction to each novel by Jack L. Chalker, who is also a fan of Russell, and three short stories which I could not squeeze into the first volume. The novels appear in the order that I wanted them to appear, the short stories appear after the novels.

Editors edit the books which you read. Among other things their job is to act as the final check that the story is readable and does not contain superfluous verbiage. Unfortunately once the final version has been produced, commercial decisions sometimes require a further editing or abridgement of the work in a later edition. Being a long-time reader I’ve always hated reading edited versions of the final work that had previously appeared in print.

Jack L. Chalker in his introduction has talked a little about each of them. I think that they speak for themselves. Hopefully you will enjoy them as much as I have and still do.

“Mechanical Mice” was written under the pseudonym of Maurice G. Hugi. If you find other science fiction written by Hugi, please note that it was not written by Russell. Hugi was a real person who also wrote in the 1930s and 1940s.

For those of you who read the introduction to
Major Ingredients,
I noted that there were six pieces of short fiction that I could not put in that book. A number of readers have asked me to name those stories. Three of them appear in this book. “Seeker of Tomorrow,” “The Saga of Pelican West” and “Symbiotica” were the other three stories.

Wasp
is Eric Frank Russell’s most famous and most read novel, and you’ll soon see why. It’s fast, it’s extremely clever, and it’s the only World War II novel that I know of set in the Sirian Interstellar Empire.

It’s a known fact that the last official fatality of World War I was a SF/fantasy/ horror writer, William Hope Hodgson by name. By the time World War II came around, governments in both Britain and the U.S. had better uses for such minds, or at least some of them. Russell went to work in the office of naval intelligence as basically a clerk, but a clerk in the infamous XX or double cross intelligence section. His office was headed by a relatively junior British reservist and former attorney named Ewen Montagu, who had a penchant for
thinking obliquely,
as one associate put it. It was Montagu who became a legend by using the body of a pneumonia victim and a lot of skullduggery to convince the Germans that the allies were going to invade Greece, not Sicily, causing large numbers of German troops to be shifted to the wrong spot.

Montagu liked people who
thought obliquely,
too. After the success of “The Man Who Never Was” he had
carte blanche,
and he assigned a number of office personnel to think of all sorts of nasty, dirty, and debilitating tricks that could be played on the Axis to mess them up. One of the junior clerks in the Europe group was Ian Fleming, some of whose ideas were in fact used, and whose other ideas, too expensive or outlandish or impractical to do, found their way later into a series of novels about a certain British agent with a license to kill. Russell was on the Oriental Team, and there was the rub. The team researched and thought up all these wonderful things to do to the Japanese, but since Britain was so threatened and so close to Germany and so far from Japan none of them were ever put into action. Just as well: even Montagu never believed Russell’s theory that a single man could, with minimal support, screw up a region so badly that its military potential would be severely diminished, and Russell could never prove the case.

And so, after the war, he put it all together in
Wasp,
a blueprint for wartime terrorism. Set in the far future, when Earth and its colonial empire faces off against the Sirian Empire in a grand interstellar conflict, it doesn’t take a lot of detective work to just scratch the Sirian’s purple skin and find Imperial Japan underneath. The Japanese secret police, their Gestapo, is right there at the start, only the
Tempeikai
become the
Kaitempei.
Almost nothing the hero uses in the book is futuristic; almost all of it could be done with Forties technology. Once you’re on the alien planet, the whole sense of alienness drops away; you’re no longer on another world, you’re in another country. And in the story Russell gets to use his slick tricks and prove his point of the wasp.

Terrorism is bloodier and more ham-fisted today than Russell would have it. I’ve been concerned for a long time that the real message of
Wasp
is that if this sort of campaign is substituted for bombing buildings we may have
no
defense.

One comment:
Wasp
was cut by Avalon Books to fit a predetermined length when first published in the U.S. It’s a good edit, but it is an
edit.
Subsequent U.S. paperback editions used the Avalon text so that for decades the only complete version was the one printed in Britain. In the late Eighties I convinced Del Rey to do a paperback using the complete text for the first time. That is the version you’ll read here, just as Russell wrote it.

He ambled into the room, sat in the indicated chair and said nothing. The baffled expression had been on his face quite a time and he was getting a bit tired of wearing it.

The big fellow who had brought him all the way from Alaska now departed, silently closing the door and leaving him alone with the man contemplating him from behind the desk. A small plaque informed that this character’s name was William Wolf. It was inappropriate: he looked more like a bull moose.

Wolf said in hard, even tones, “Mr. Mowry, you are entitled to an explanation.” A pause, followed by, “You will get one.” Then he stared unblinkingly at his listener.

For a long-drawn minute James Mowry suffered the intent scrutiny before he asked, “When?”

With that, Wolf went on staring at him. The gaze was unpleasantly piercing, analytical, and the face around it was about as warm and expressive as a lump of hard rock.

“Walk to and fro across the room.”

“Tsk-tsk!” grunted Wolf in a way that indicated neither pleasure nor pain. “I assure you, Mr. Mowry, that I am quite serious when I ask you to oblige by walking bow-legged.”

Splaying his knees as much as possible, Mowry stumped around as if riding an invisible horse. Then he resumed his chair and said pointedly, “There’d better be money in this. I don’t come three thousand miles and make like a clown for nothing;”

“In this job I have to be.” Wolf stared at him again, long and penetratingly. “You’ll do. Yes, I’m sure you’ll do.”

“I’ll tell you in a moment.” Opening a drawer, he extracted some papers, passed them across. “These will enable you better to understand the position. Read them through—they lead up to what follows.”

Mowry glanced at them. They were typescript copies of press reports. Settling back in his chair he perused them slowly and with care.

The first told of a prankster in Romania. This fellow had done nothing more than stand in the road gazing fascinatedly at the sky, occasionally uttering ejaculations and loud phrases such as, “Blue flames!” Curious people had joined him and gaped likewise. The groups became a crowd, the crowd became a mob, and the bigger the mob the faster it grew.

Soon the audience blocked the street, overflowed into sidestreets. Police tried to break it up, making matters worse. Some fool summoned the fire squads. Hysterics on the fringes swore they could see or had seen something weird above the clouds. Reporters and cameramen rushed to the scene. Rumors raced around. The government sent up the air force for a closer look. Panic spread over an area of two hundred square miles from which the original cause had judiciously disappeared.

“Amusing if nothing else,” remarked Mowry.

The second report concerned a daring escape from jail of two notorious killers. They had stolen a car, made six hundred miles before recapture. Their term of freedom had lasted exactly fourteen hours.

Handing back the papers, Mowry said, “What’s all this to me?”

“We’ll take those reports in the order as read,” began Wolf. “They prove something of which we’ve long been aware but maybe you haven’t realized yourself. For the first one, that Romanian did nothing, positively nothing save stare at the sky and mumble. All the same, he persuaded a government to start jumping around like fleas on a hot griddle. It shows that in given conditions action and reaction can be hopelessly out of proportion. Also that by doing insignificant things in suitable circumstances one can obtain results monstrously in excess of the effort.”

“I’ll give you that,” Mowry conceded.

“Now the lamsters. They didn’t do much either; climbed a wall, grabbed a car, drove like mad until the gasoline ran out, got caught.” He leaned forward, continued with added emphasis, “But for most of fourteen hours they monopolized the attention of six planes, ten helicopters, one hundred and twenty patrol cars, eighteen telephone exchanges, uncountable phone lines and radio link-ups, not to mention police, deputies, posses of volunteers, hunters, trackers, forest rangers and National Guardsmen to a grand total of twenty-seven thousands scattered over three states.”

“Finally, let’s consider this auto smash. We know the cause; the survivor was able to tell us before he died. He said the driver lost control at speed while swiping at a wasp which had flown in through a window and started buzzing around his face.”

“It nearly happened to me once.”

Ignoring that, Wolf went on, “The weight of a wasp is under half an ounce. Compared with a human being its size is minute, its strength negligible. Its sole armament is a tiny syringe holding a drop of irritant, formic acid, and in this case it didn’t even use it. Nevertheless it killed four big men and converted a large, powerful car into a heap of scrap.”

The Men of Pride County: The Rebel by West, Rosalyn
A Gathering of Spies by John Altman
Longarm 242: Red-light by Evans, Tabor
Sentido y Sensibilidad by Jane Austen
The Light Tamer by Devyn Dawson
All the Way by Megan Stine
Last Orders by Graham Swift
The Seven Tales of Trinket by Moore Thomas, Shelley
Spoils of the Game by Lee Lamond
Cartel by Lili St Germain