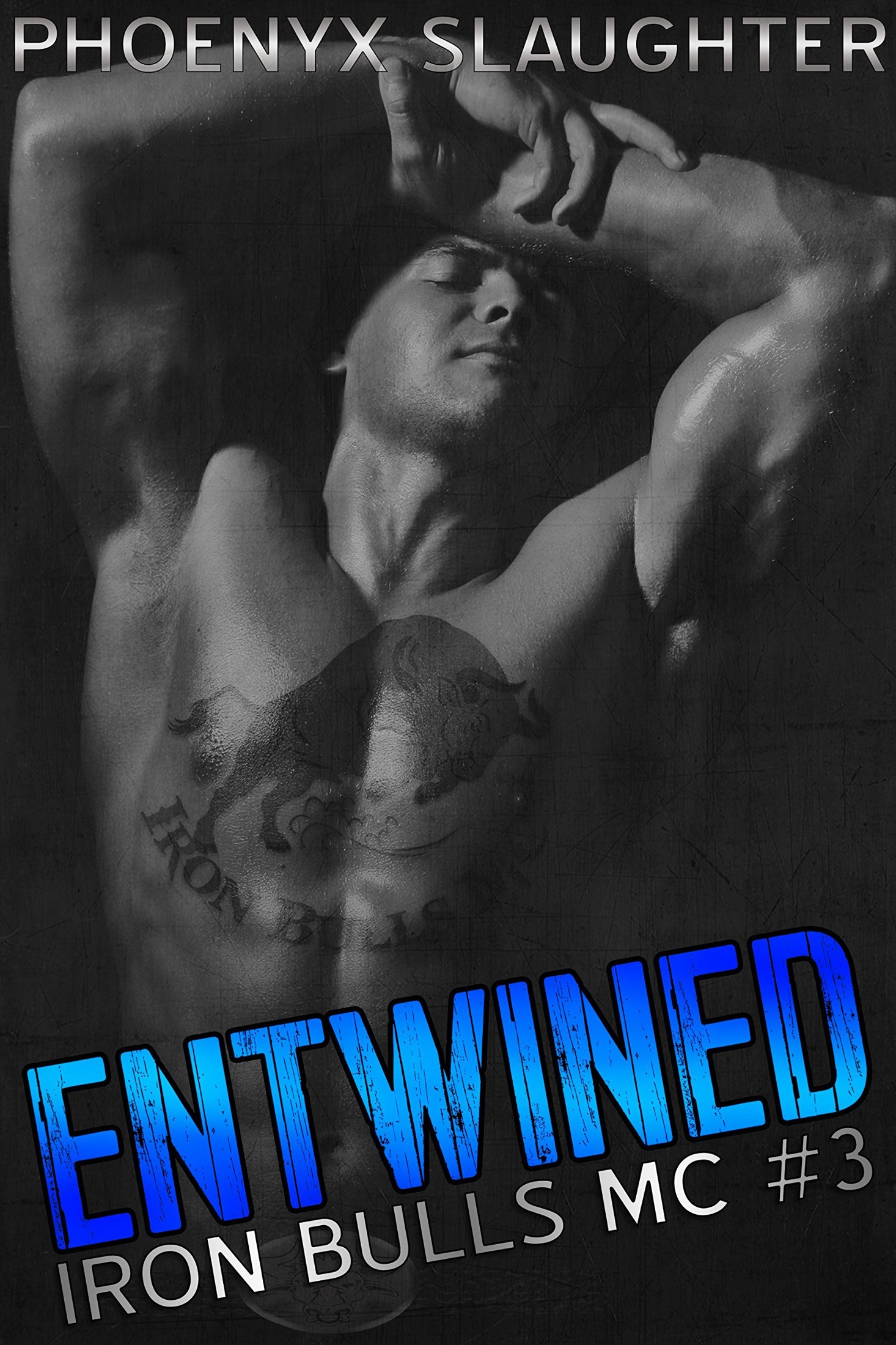 Note From the Publisher

In Entwined, the highly anticipated third book in the Iron Bulls MC series, shocking secrets and desires are revealed. Can Dante and Karina’s passionate bond survive or will they be torn apart?

Entwined is the third book in the Iron Bulls MC series. It is a 28,000 word novella and should probably not be read as a stand-alone, as it picks up where  Disconnect left off. But it’s up to you.

Karina’s young, so the ending could be considered a Happy For Now.

Entwined and the Iron Bulls MC series are works of fiction. All names, characters, locations and incidents are products of the author’s imagination. Any resemblance to actual persons, things, living or dead, locales or events is entirely coincidental.

Entwined (Iron Bulls MC #3) is ONLY available for purchase at the following locations:

IF you downloaded this copy from any other location, YOU ARE STEALING.

Published by Ahead of the Pack, LLC

T
hank
you to my amazing and persistent readers who kept asking me when Entwined would be available. I’m forever grateful for your love of Dante, Karina and the Iron Bulls MC. Your emails, Facebook messages, posts, reviews, and support mean so much to me!

Thank you to my awesome Beta Readers, Amber, Kim, Melony, and Storm for sticking around!

My ladies in the Iron Bulls MC Clubhouse Facebook group, thanks for keeping the faith! Tanya, you’ve been especially persistent and I thank you for it!

An extra special thank you to Vanessa at PREMA for taking the boys of the Iron Bulls MC on.

Rosa Sharon, thank you for taking a last look and embracing Dante.

Donna Cox, thank you for all your hard work and helping authors like me get the word out about their books.

There are a chosen few I’ve entrusted with this dirty little secret. Thank you for supporting me, even though you think I’m nuts. I’d be lost without you.

Finally, I need to thank my old man, who constantly asks if he can help me with the “dirty” research.

I
f you’d like
to be kept up-to-date on new releases, special giveaways or what I’m working on, sign-up for my
newsletter
.

Or you can join the
clubhouse
.

B
eing
in the same clubhouse where I’ve had some raunchy and sometimes public sex usually turns me on. Not today.

After the president of the Iron Bulls MC so casually informed me that my father has another family, we all went back to the clubhouse to “chat.” So now I’m seated at a table—not the official table where the club has church—with my boyfriend, Dante, Romeo, and my father. Uncomfortable doesn’t adequately describe this scenario.

Dante’s been making murderous faces at my father since before the bombshell announcement. He hates my father for many different reasons.

My father nods at Dante. “Karina, how did you two meet?”

Before I open my mouth to answer, Dante places his hand on my knee and leans forward. “Better question is what the fuck kind of father leaves his daughter alone to fend for herself for so long, you piece of shit.”

My father’s shrug of indifference hurts so much, I have to avert my eyes. “She’s smart and capable. I’ve never had to worry about her.” It may sound like a compliment. But to me it just sounds like a convenient excuse.

Dante shakes his head. He sits back, but keeps his hand on my leg.

Romeo’s gotten tired of being ignored. “The real question, Tucker, is how you plannin’ to work off your debt? Because from what I hear, Kadence is tight with the Savage Dragon’s VP.”

A pained look crosses my father’s face and he glances at me with tired eyes. “She doesn’t need to be here for this.”

Romeo sits forward, placing his elbows on the table. “Oh, I think she does.” He focuses his gaze on Dante. “I’m sorry, brother. Until you told me you thought she was his kid, I had no idea.”

Dante remains silent, but the tension radiating from him has a life of its own.

Romeo’s scary eyes move to me next. “Your father’s got a pretty serious gambling problem, sweetheart. About three years ago I bailed him out of trouble. Since he was never going to make enough to pay me back in cash, he offered a trade.”

“You fuckin’ shittin me?” Dante explodes, throwing his fist onto the table with enough force it rattles the thick oak. He seems to have grasped what Romeo’s explaining right away, while I’m still in the dark. Whether Dante’s pissed at my father or Romeo, I can’t be sure.

“Relax, brother. I ain’t gonna touch your girl. Ol’ Tucker here’s just gonna have to come up with some cash now.”

My mind’s spinning from everything Romeo just laid out. I can’t deal with the fact that my father apparently tried to sell me off for a gambling debt. My own father treating me as if I’m some disposable whore? That’s too disgusting to contemplate. No. Instead, my mind latches onto one thing and one thing only.

“Who the hell is
Kadence
?”

K
illing Karina’s
father right in front of her is probably a bad idea. But it’s a battle not to wrap my hands around his fuckin’ throat and throttle the life out of him.

“I want to be clear on what you’re tellin’ me, prez. My girl’s father offered, what exactly, if you took care of his debt?”

Romeo sits back, a sadistic smile curling his mouth. He flicks his gaze at Tucker. “He offered me one of his virgin daughters.”

Next to me Karina lets out a harsh sob and my vision swims red.

Tucker’s real quick to defend his worthless ass. “It’s not like they’re making it sound, Karina. I figured I’d introduce you, and you’d get along.” He glances at me and shrugs.

What a piece of shit.

“Who’s Kadence?” Karina asks again. Her voice comes out clear and strong even though her body’s trembling.

Romeo—like the jackass he is—watches the family drama with a smirk that I want to punch right off his face. Him taking joy in my girl’s misery is pissing me the fuck off.

“I had an affair with your mother. Met her when she was waitressing at one of the truck stops. She had you and I moved her down here, so I could still see the two of you.”

“Hence the gambling. What with two families to support and all,” Romeo chimes in.

“I couldn’t tell my wife about you. She would have used—it doesn’t matter now. We divorced shortly after your mom passed away.”

“Then why were you still gone all the time?”

Fucker’s got no answer for his daughter.

Like I said, he’s a worthless piece of shit.

“Did you tell Logan to stay away from me?”

Tucker opens his mouth—and by the seedy smile on his face he’s planning to lie through his teeth. “Don’t fuckin’ lie to her,” I growl at him and he snaps his mouth shut.

“Why?” Karina lets out a miserable sniffle. “He actually took care of me when you were gone all the time.”

Tucker flaps his hands in the air. Christ, his daughter has more spine than he does. “I was fixing to set you up with Romeo and I couldn’t have Logan fuck that up.”

Karina sniffles. When Romeo sees the tears rolling down her cheeks he stops laughing.

“He broke my heart because of you?” she asks. The innocence in her voice fuckin’ shreds me.

“The hell you didn’t!” she snaps at him and I’m proud of my girl. “You’re the one who sent that guy to
talk
to me, aren’t you?” She swipes the tears from her cheeks and stares her father down, waiting for an answer.

Tucker’s guilty gaze swings away and I lose my fuckin’ shit. “You set your own daughter up to be molested? What the fuck’s wrong with you?”

Both Romeo and Tucker explode out of their chairs. Next to me, Karina whimpers and grips my hand tighter.

Tucker stutters and shakes his head. “What are you talkin’ about? I never—”

“You hire men to deliver a message like that to a beautiful teenage girl all alone. What the fuck you think was gonna happen to her?” I ask, dropping each word low enough for Tucker to sense he’s skating close to getting a bullet in his empty head.

He spreads his hands out in a helpless gesture. This fucker isn’t nearly as concerned as he should be about what he’s put his daughter through. “Karina, I just couldn’t have you keep sniffing after Logan. He was only supposed to scare you. Not hurt you. I’m so sorry.” The apology seems to come as an afterthought and the urge to kick him to death makes my feet twitch.

Ignoring her father, Karina turns to me. “Dante, please, can we go now? I’ve heard enough.”

I raise an eyebrow at Romeo who nods.

I stand and she follows. Her father doesn’t say a thing.

If Romeo doesn’t put this waste of air in the ground, I swear to fuck I will.