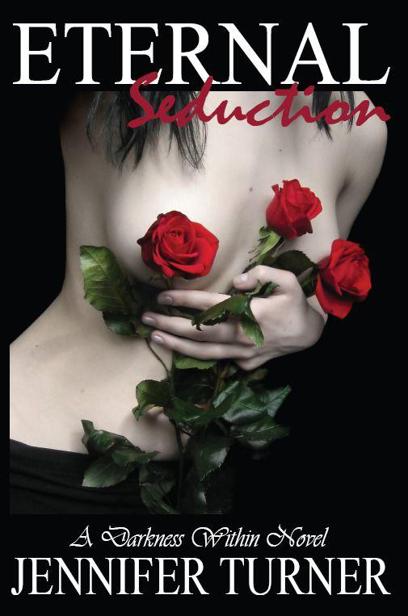 A Darkness Within Novel

ETERNAL SEDUCTION: A Darkness Within Novel

All rights reserved. No part of this book may be used or reproduced in any manner whatsoever without written permission except in the case of brief quotations embodied in critical articles or reviews. For information address Jennifer Turner at [email protected]

This is a work of fiction. Names, characters, places, and incidents either are the product of the author’s imagination or are used fictitiously, and any resemblance to actual persons, living or deceased, business establishments, events, or locales is entirely coincidental.

For my husband, my Mom, and my daughter. For everyone who stood by me and offered endless words of encouragement. For all my friends and the Originals, you know who you are.

And to Logan and Kerestyan, who decided to break the mold and not be the classic hero and heroine…thank you!

Logan Ellis stared at the seventy-something woman standing hunched in front of her then down at the purse. Big and brown, it probably gave the lady back problems, so it wasn’t as though she’d really miss it. If nothing else, she was doing the old bat a favor.

She narrowed her eyes when the woman clutched the handbag tighter, wrinkled fingers splayed across the worn leather like it was an irreplaceable national treasure.

She hated having to ask twice. “I said give me your purse.”

When the geriatric gulped, eyes searching the dark streets for a Good Samaritan, Logan ripped the bag from her weak grasp and took off down the sidewalk.

What was the world coming to?

Slowing, she slid around a corner before breaking into a full out run again. The worn soles of her too small shoes made little noise against the cold pavement, save for wet sloshing sounds as she splashed through urine tainted puddles.

You should have taken her umbrella, too.
Logan smiled as she raised an arm and wiped her rain soaked face on the sleeve of her dirty coat. If rain wasn’t the closest she could get to a real shower, she might have considered it. However, running with an open umbrella didn’t make for a quick getaway.

Turning sideways, she slipped between the cracked doors of an abandoned warehouse. She sucked in mouthful after mouthful of air, trying to slow the hammering of her heart against her ribs. She shook out the tight muscles in her legs between steps, moving towards the heap of soiled blankets in the far corner.

She seriously needed to find a better way to get money. This ripping off purses and wallets for twenty to forty bucks at a time just wasn’t cutting it anymore.

It wasn’t until after she’d sank into the damp blankets and dumped out the purse that Logan realized her manufactured bliss was wearing off. Scattering the contents with a swipe of her hand, she tore open the change purse and counted.

Thirty-two dollars in the form of thirty-two one-dollar bills.

No credit cards. No ATM card. No checkbook.

Not even a drivers license with an address so she could go punch the stripper loving old lady for giving her grief over thirty-two dollars!

After standing up and shoving the money into her pocket, Logan kicked the purse. “Stupid, perverted crone!” she yelled, taking comfort in the hollow sound as it bounced off the crumbling walls. She’d intended to catch Granny before she went to the strip club, but there were too many people around.

No doubt, the hag was now standing at the police station, crying her eyes out about the hooligan who stole her purse. She was probably making up some story about not being able to buy her life saving medications with her social security.

Logan laughed as she worked through the doors and back out into the alley. Little did the officers know that Grandma was spending hundreds of dollars a month to watch young, muscled studs shake their dicks. Hell, maybe she was paying for more than just a little shaky-shaky.

Maybe she was getting some serious couch time.

Pulling the half-eaten apple she’d found in the trash outside the strip club from her coat pocket, Logan took a bite and continued down the alley. Cold rain pelted her face, acid laced droplets clinging to her eyelashes, dripping from her hair.

Some people said New York City was at its most beautiful in the rain. She truly believed those people had never sauntered down a trash strewn back alley, ankle deep in jagged potholes teeming with fetid body fluids.

Sure, Broadway and Times Square were great places. Fancy cars, expensive clothes, spoiled celebrities. Where some people would stuff more cash in a valet’s pocket than most people made in a month.

But that wasn’t the city Logan knew.

She knew the darker parts. Chopped cars, ratty clothes, filthy rich drug dealers. Where if you so much as looked up when you heard the crack of a gunshot, the next bullet was shattering
your
skull.

That was the city Logan Ellis had known for over a decade.

She jogged across the street intersecting the alley, unmoved by the screeching tires of an old Buick as it swerved around her. When the driver snarled a lackluster string of obscenities through the passenger window made of plastic and tape, she presented the New York one-finger salute and kept going.

Less than three blocks away, a little bag of powdered-escape lie nestled in the pocket of a greasy man with chipped teeth. She wasn’t about to let a car get in her way.

Halfway down the next alley, Logan slowed to a lazy pace. Fifteen yards in front of her, shadowed figures blurred and twisted. Feral growls mingled with the steady drumming of raindrops against the pavement, a symphony of mindless rage and nature’s hatred.

Vampires
. She stopped and leaned against the grungy brick wall of what used to be a Chinese Buffet. She bit off another piece of apple and chewed it as she watched the three figures attack each other. All roughly the same size, they clashed then drew back, circling like starved animals before doing the same dance again.

As an afterthought, she really didn’t blame them. What were they supposed to do when a dirty street waif stormed through the doors, screaming about vampires fighting in an alley down the block? Run out into the night with their guns drawn and bust a cap in some undead ass?

At first, she’d been convinced a bad batch of drugs made her see them. But after seeing another fight break out a week later, then watching one stalk through a dilapidated warehouse leaving a trail of bloodless, vagrant corpses in his wake, she realized no amount of drugs would make them go away.

Neither did a week without drugs.

In the end, she’d found herself with little choice to do anything other than accept that vampires were real, they had fangs, and they were everywhere. There was nothing she or the police could do about it, other than give her yet another NYPD standard issue boot print across her right ass cheek.

Having learned her lesson, now she just kept her distance and waited for the carnage to end. Eventually, they’d either kill each other or scurry away at the first signs of morning, licking their wounds like human sized sewer rats.

Shaking back her sleeve, Logan glanced down at the shattered but still working face of her recently acquired timepiece. Three o’clock in the morning. There was still a solid three hours of darkness before the sun would rear its ugly head.

She stared between the vamps and her watch. She really didn’t have time for this kind of obstacle and couldn’t take another route. Street dwellers were a territorial lot and she didn’t have permission to follow any path but the one she was currently taking.

They left her with little choice.

Shearing off the last good piece of apple between her teeth, she smiled as she turned sideways and planted her right foot. Lifting her left knee, she bent her elbows and locked on her chosen target before whipping the apple core as hard as she could.

It smashed against the tallest vampire’s head with a hollow, mushy thud. In less than the time it took her to resume her place against the wall, all three were facing her, fangs clearly visible.

She finished swallowing her dessert and grinned at their disbelieving faces. “Would you beasties mind killing each other somewhere else, or at least stopping for a minute so I can get by?”

The one she’d thrown the fruit at snarled and snapped his teeth together like an angry dog. “Whose Puppet are you?”

She arched a brow. What the hell was that supposed to mean? But she didn’t have time to consider it further, focusing instead on the much larger figure fading into view behind her fanged roadblocks. As it loomed forward, the shadows gave way to a pallid face framed by long, dark hair, spilling over broad shoulders.

Now
he
was a classic vampire.

The sound of clicking teeth pulled her attention back to the pissed off puppy and his question. “Puppet? I’m not exactly sure what that means. I suppose the only frayed strings I dance on are God’s.”

Logan watched, more than just a little amused when her three roadblocks whirled around then straightened. Apparently the new vampire scared them with his comment. Whether it was the deep, rumbling timbre of his voice or the words themselves, she wasn’t sure. Either way, the man garbed from head to toe in black didn’t appear to be pleased.

He stared down at the men through sharp, narrowed eyes. “How many rules have I set for my city?”

Each passed a glance between the others before the smaller one spoke. “We didn’t know she was there.”

He raised a large, black gloved hand. “I didn’t ask about her. I asked, how many?”

“And do you recall the punishment for breaking that one, very simple rule?”

All three managed to nod before their bodies burst into a golden red haze, which quickly dissipated in the falling rain. No flash and flare, no theatric sounds, not even an angry declaration…they’d simply vanished.

Had Logan not seen a vampire die before, she might have felt a tad unnerved by the sight. But having witnessed it a time or two already, she mainly found herself intrigued by how clean the whole process was. There was no release of foul smelling body fluids, no pools of blood to clean up, not even a body to dispose of.

It must be nice to leave nothing behind.
Shaking her head to clear the dark memories threatening to overtake her, Logan stepped around the stone-faced ghost and continued down the alley.

She’d barely gotten more than a few feet away before she sensed him fall into step beside her. Eyes focused ahead, hands in her pockets, she kept moving. “Am I supposed to say thank you or something?”

“You have no questions about what you just witnessed?”

“I would think, to one such as yourself, it’s not exactly normal, surmise it’s not something you see every day.”

“How often?” he asked, his tone tinged with something between anger and concern.

She shrugged. “Once every two, maybe three weeks. It usually ends with one killing the others or all of them running away when the sun spills over the horizon.” She balanced her arms out to her sides as she prepared to jump over a large, overflowing pothole. “Does it really matter?”