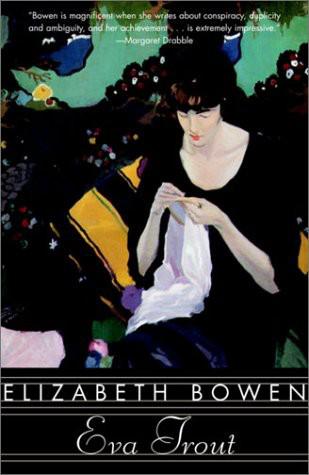 Elizabeth Bowen was born in Dublin in 1899, the only child of an Irish lawyer and landowner. Her book Bowen’s Court (1942) is the history of her family and their house in County Cork. Throughout her life, she divided her time between London and Bowen’s Court, which she inherited. She wrote many acclaimed novels and short story collections, was awarded the CBE in 1948, and was made a Companion of Literature by the Royal Society of Literature in 1965. She died in 1973

Copyright 1968 by Elizabeth Bowen Copyright renewed 1996 by Curtis Brown, Ltd., Executor of the Estate of Elizabeth Bowen All rights reserved under International and Pan-American Copyright Conventions. Published in the United States by Vintage Books, a division of Random House, Inc., New York, and simultaneously in Canada by Random House of Canada Limited, Toronto. Originally published in hardcover in the United States by Alfred A. Knopf, Inc., New York, in 1968.

4  This is Where We Were to Have Spent the Honeymoon

PART I
GENESIS
ONE
Outing

“THIS is where we were to have spent the honeymoon,” Eva Trout said, suddenly, pointing across the water. She had pulled up the car on a grass track running along the edge of a small lake. She switched off the engine—evidently, they were to gaze at the castle for some time.

Her carload of passengers was dumbfounded. Nothing of this had been mentioned before. The four Dancey children, packed in the back seat, climbed over one another to see better (the view was framed by the Jaguar’s left-hand windows). Of their mother, in front beside Eva, more seemed required—Mrs. Dancey, wildly craning her neck, brought out: “Not in winter, I hope?”

“No—spring. There would have been daffodils.”

The castle, mirrored into the sheet of probably artificial water, did not look ancient. Nor did it look indigenous; though its setting was English, the pile resembled some Bavarian fantasy. Light-coloured, standing straight up out of the lake (there was no terrace), the fagade showed with photographic distinctness in the now fading January afternoon. Its windows, many of which were balconied, one and all were made sightless by white shutters. Above the turreted roofline rose steep woods, sepia with winter: no smoke from any contorted chimney blurred the transparency of the trees. The only movement was in the foreground, where swans rippled the image cast on the water by zigzagging absently to and fro.

Though the Jaguar must have been nosing towards it for some time (along woodland rides, through tunnels of evergreen) the castle had only now come into view, with dramatic suddenness. And the same might be said of Eva’s design. The Danceys had had no idea where they might be going to, or why: all they knew was, Miss Trout was taking them for an outing. For two-and-a-half hours, up hill, down dale, they had been rushing through cold scenery. What they’d been more and more earnestly looking forward to was a stop for tea: this was a sunless and sere day for pleasure motoring. It was some weeks, now, since Miss Trout had first invaded the vicarage, showering benefits on them, often mixed ones. How long, they wondered, would this go on for? For ever and ever? Perhaps not …

“Closed for the winter, evidently,” said Mrs. Dancey. She hazarded: “Is it in private ownership?”

“It was a school for a while. Not now—
no
; we should have had it all to ourselves,” the girl said, nonchalantly and grandly.

“Mother,” asked one of the children, “may we get out?”

“May they get out for a minute or two, Eva?”

Eva did not reply:
she
was getting out. Having done so, leaving her door open, she walked round the car throwing all others open, with an air of largesse. January knifed through the heated Jaguar; a child sneezed as it battled its way to freedom, and Mrs. Dancey, erecting her fur coat-collar and sinking so far as might be down into it, declared: “I think I’ll stay where I am.” Eva did not reply: she had walked away. The children set off in the reverse direction—their mother, impaled on draughts, sent a whinny after them: two of them came back and banged shut the doors. Mrs. Dancey at once lowered a window, to call out: “All of you, better not go too far!”

Once alone, Mrs. Dancey, who already had a crick in her neck, saw no further need to study the castle. Instead, here was an unprecedented opportunity to study Eva, at length and in peace, from a safe distance. Eva, one saw straight ahead, through the windscreen. The giantess, by now, was alone also: some way away along the edge of the water she had come to a stop—shoulders braced, hands interlocked behind her, feet in the costly, slovenly lambskin bootees planted apart. Back fell her cap of jaggedly-cut hair from her raised profile, showing the still adolescent heaviness of the jawline … No, it would not have done, pondered Mrs. Dancey (meaning the marraige: what marriage? Any). Yet after all, why not? She’s twenty-four.
Is
she thinking? Mrs. Dancey thought not. Monolithic, Eva’s attitude was. It was not, somehow, the attitude of a thinking person.

The girl looked round.

The watcher hastily lowered her eyes to the walnut dashboard, with its so many dials. She went on to close her eyes, only just in time—Mrs. Dancey’s favourite form of immunity was a feigned nap; and, sure enough, Eva was coming back! Purposeful strides could be heard returning over the turf made iron by black frost. They passed the car, not a pause, and continued onward. Going after the children?

Not yet inspired, torpid after the drive, the children stood about in a loose group, stamping their feet or blowing on to their fingers through Fair Isle gloves. Their bright gloves (Christmas presents), their suffering scarlet ears and the brass-yellow of the two girls’ pigtails were the only touches of colour about the Danceys, otherwise clad alike, irrespective of sex, in sombre dark-blue berets and belted overcoats. In age they graded down from thirteen to seven: Catrina, Henry, Andrew, Louise. From time to time they communicated neutrally with one another, in their own manner, barely moving their lips. Had the lake been frozen, they could have slid on it; but it had not, yet, more than a margin of mean ice, nibbled at by the ripples caused by the swans. As for the castle, it looked, from here, as though cut out, flat, from a sheet of cardboard.

“Catrina!” now shouted the nearing Eva. “All of you! Why do you stay so still?”

“Anywhere to go to is too far.”

“All right.—Is that castle
bona fide
?”

“Could I pass my honeymoon there if it had not?”

Bright-witted little Louisa chimed in: “Or there couldn’t have been a school in it, either, could there?”

“Yes, that school,” Andrew wanted to know, “was it no good?”

“It was experimentary,” Eva vouchsafed, in a large way waving a hand. “Boys and girls.”

“That has been tried before,” Henry pointed out.

“So then, what happened?” persisted Andrew. “Were any drowned in the lake?”

“Or did they push each other out of the windows?” Louise supplemented. “Or fall out of a boat?”

“There’s no boat,” said Andrew in a discouraged tone. “If there had been, we could have rowed across.”

“Not if the boat had been on the other side,” said Henry, again scoring a point.

“We could have walked round, then rowed back.—Was it sunk, do you think?”

“Anyway, that would have taken too long,” said Catrina, pessimistic as ever. She drew some shreds of Kleenex out of a pocket and wadded them together, to blow her nose on. “Eva, how do you know about this school? You weren’t there, were you?”

“For a while,” said their patroness. She said no more.

“So then what happened?”

Henry, eyeing the structure with growing scepticism, inquired: “Are there dungeons, for instance?”

With a fervour she seemed to reserve for Henry, Eva cried out: “No, you horrible boy—nothing so insanitary!”

“I rather thought not,” said Henry calmly. He made as though once more to turn away, then did not. Pressing home his advantage, he asked: “Where are
we
going to have tea?”

Though small for his age, twelve, Henry stood out: topmost intelligent one of a family all rendered to a degree intelligent by poverty, breeding and the need to get on. His manner was particularly composed, and at times (as on this occasion) sardonic. Though Andrew was the handsomer of the boys, Henry’s features, made delicate by precocity, gave promise of greater interest in years to come. His charm was nascent, perverse and a shade stand-offish. Already he was qualified to deal with Eva: she could not boss him and he could mortify her—though unless unduly provoked he refrained from doing so; treating her, on the whole, as he might an astray moose which when too overpowering could be shooed away.

The word “tea,” not spoken aloud till now, made the others stare haggardly at Henry, then at Eva—who gave out: “Oh, some hotel, I suppose!”

“There weren’t many,” Henry remarked, “on the way here.”

Catrina, re-wadding the Kleenex, made further use of it. “If there were, there would not be tea if we’re too late.”

“It’s not late,” shouted their captor.

“It’s getting dark, you know.”

It was. The inhospitable castle receded, already, into its inklike woods, taking on a look of the immaterial—its reflection, even, fainted out of the lake, over which was forming a frozen vapour. No pathos invested the scene. There was no afterglow—there had been no sun. And the swans were gone.

Still ruminating over the school’s fate, the children, swarming back to the Jaguar, looked behind them once or twice at the castle. Eva did not—she could not, now, wait to be off. Her boorish infidelity shocked the Danceys: one of them raised a voice in reproof. “If it’s left like
that
, I should think it would fall down. Doesn’t it belong to anyone now?”

“Oh yes, it belongs to my father’s friend.”

“
How
,” she retorted, “could a thing belong to anyone dead?”

They packed back into the Jaguar—causing Mrs. Dancey to start up, preternaturally wide-awake, frantically wanting to know: “What time is it?” Cocooned in a rug, she had lapsed from the acted nap into true, deep slumber; which, guilty though it had left her, had done good. Mrs. Dancey was permanently exhausted. For all she knew, now, this could be tomorrow. And where in the world ARE WE? (She prayed to remember.) Anyway here was Eva, right back on top of one. Eva as ever, extra heavily breathing, about to twitch the ignition key. “Are you
all
there, children?” appealed the mother. Wherever this was, it was soon to be somewhere else—for the Jaguar, stealthily purring, was creeping forward.

THOUGH Eva these days all but lived at the Danceys’, she did not live with them: her base, not too far from the vicarage, was the home of friends with whom she looked like making an indefinite stay. She was paying guest there. This had the approval of her guardian (in whom was vested the office of trustee also) by whom any arrangement involving money had, still, to be authorised. For the big heiress was not, by the terms of her father’s will, to enter into enjoyment of her fortune till she should be twenty-five. (That would be, next birthday.) Meanwhile her welfare was, at least in name, the concern of Constantine, who charged himself with financial arrangements for it. Her wish to take up residence with the Arbles, Mr. and Mrs., had, happily, suited Constantine’s book. Indeed, the Arbles seemed to him just the thing. Their home, Larkins, should be remote from trouble. They solved a problem; he recompensed them, liberally, accordingly. He had a mind easily set at rest.