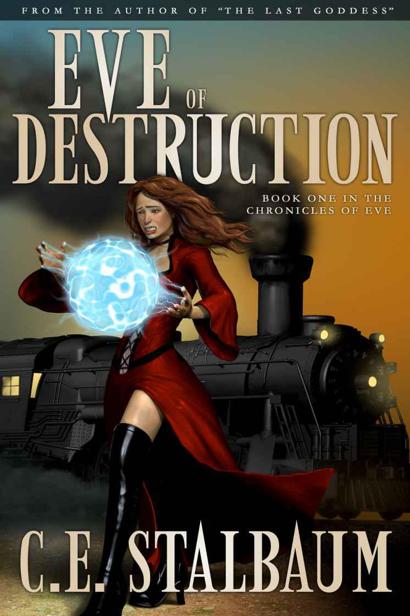 This is a work of fiction. All the characters and events portrayed in this novel are either fictitious or used fictitiously.

The Chronicles of Eve Trilogy

As with any large project like this—especially one that was written and re-written over the course of such a long period of time—there are more people to thank than I have space for. But I’m going to rattle off a few names anyway and hope that everyone else already knows how I feel!In particular, I wish to extend my appreciation to my artists, Gilber and Chris, for doing such an awesome job with the cover art and lettering. I’m sure all writers love anything that helps their world come to life, and their work definitely did that for me. I also want to extend an infinite thanks to my family for their patience and support. Without them, none of this would be possible.

Most importantly, though, I wish to salute my readers, the most vital component of any story. Enjoy yourselves, and let me know what you think!

They were waiting for her when she stepped out the front door: three dark-coated men with wide-brimmed hats, their greasy faces veiled in shadow. Two of them already had their guns pointed at her, and the third idly flipped a serrated knife between his hands. They hadn’t said anything. They probably assumed their aura of quiet menace would be enough to intimidate her.

It was time to prove them wrong.

They didn’t move; they didn’t even twitch. The three Dusties continued their silent stare-down, and Eve balled her hands into fists. A year ago—by the Goddess, a few
months
ago—and she would have frozen in terror at the mere sight of Industrialist thugs all the way out here on the east coast. They were a plague infecting western Arkadia, and the magi caste had thought them contained.

But now the disease had spread all the way to her doorstep, and it was up to her to burn it out. They believed she was a helpless little girl, a pampered aristocrat with no capacity to defend herself. They, like all Dusties, sorely underestimated the power of the Fane.

“Then I guess I’ll just kill all of you,” Eve hissed. “May the Goddess grant you the mercy I shall not.”

She flicked her wrists, and her palms exploded in orange-white flame. The Dusties wouldn’t expect a second-year academy student to wield raw energy like this; they weren’t prepared for the power she could unleash. The Flensing might destroy her when she was finished, but as long as she could burn the smug looks from their soot-stained faces, it would all be worth it.

Eve extended her hands toward the Dusties. The flames flickered hungrily, yearning to lash out and devour everything in front of them. The power of the Fane coursed through her, its energies brimming at her fingertips—

The spell died in a puff of harmless smoke, and the magic retreated back into the Fane. The Dusties, goading stares and all, vanished into the shadows.

And Eve was once again alone. Her hands trembled as she held them up to her face, the cold rain beading on her pale skin. Her dress was already soaked through, and her shoes had sunk into the muck.

She sighed and closed her eyes. She saw the Dusties everywhere she went now. Today they were the trio of shrubs in the front lawn; yesterday they’d been the fence posts out in the backyard. And in her dreams, they were everywhere…but always just out of reach.

A growing part of her wished they really would just stride up to the front door, armed or otherwise. At least she would get a chance to finally see them; at least she would be able to look into the eyes of the men who had taken the last of her family away from her. But she knew that would never happen. They had killed her mother and disappeared, and they wouldn’t be coming back.

Eve finally opened her eyes when she heard horses drawing a carriage up to the front gate. A familiar male voice thanked the driver, and her heart sank as the rage inside her drained away. She just wanted to be alone. Why did he always insist on following her wherever she went?

“I looked for you at the cemetery,” Zach Lagrand said as he sloshed his way across the old cobblestone walkway. “How long have you been here?”

She tossed him a cold glare. “What do you want?”

“I don’t want anything,” he said, raising his hands defensively. “I just thought I should check on you.”

Zach stood there in merciful silence. She could tell he was debating whether or not he should lean forward and share his umbrella, but he knew full well she could weave a spell to block out the rain if she wanted to.

Eventually he sighed and rubbed a hand across his mouth. “I saw your train ticket.”

Her eyes narrowed dangerously. “You were digging through my things?”

“No, but I do have a house key, you know,” he reminded her. His voice remained soft, which for some reason bothered her more than if he’d been yelling. “I saw it on the table yesterday.”

“And now you’re here to convince me not to go.”

Zach grimaced. “It’s crazy, Eve. You can’t just leave school like this, not in the middle of a semester. There’s no way it’s what your mom would have wanted.”

“It’s
exactly
what she wanted. You read the note.”

He rolled his eyes. “That scrap could mean almost anything. We’ve been over this. It’s meaningless gibberish.”

“It is
not
gibberish!” Eve snapped. It came out harsher than she intended, and she quickly spun back around to glare at the front door. Anything to get away from his damnable blue eyes.

As the days had gone by, her anger had become a tough and resilient shield against the pain. First she’d been mad at herself for not being here when it happened, and then later she’d been furious at Zach for the same reason. Eventually she’d just blamed it all on her mother. How could Tara DeShane, a powerful mage, fall before a handful of Dusty thugs?

The welling of tears surged into a river, and suddenly Zach was reaching out to catch her. It was a repeat of the first moment she’d come home and found the body…and almost every day since. Eve had promised herself that today would be different, but it never was. And it never would be.

“If you’re going to go,” he whispered into her ear once the worst of the sobbing had subsided, “at least wait a while. Give yourself time to settle and make sure you’re doing this for the right reasons.”

Eve gripped onto his shoulders and pushed him away. She could barely see his face through the tears despite her best efforts to wipe them away. “Like what?”

“Like…I don’t know, but you shouldn’t do this out of grief. You need time. Let yourself have it.”

“I know, but…” He sighed in frustration. “That could mean almost anything. It could have been a random Dusty hate attack. The papers have been filled with those lately.”

“Then why did they take the book?” Eve countered. “Why would they have ignored an entire house of valuables and taken that one thing? They killed her for it, Zach. And I’m going to find out who and why.”

He sighed and lowered his eyes. “We still don’t know if they’re the ones who took it. The police weren’t convinced. If you just give them some time, maybe they’ll—”

“The police don’t give a damn about us and you know it!” Eve growled. “They don’t care about the magi-caste anymore. I wouldn’t be surprised if half of them were Dusties at this point.”

“It won’t be any better in Vaschberg,” Zach warned. “Actually, it will be a lot worse. It isn’t safe for magi there—or anywhere else out west, for that matter.”

“It wasn’t safe for mom here, either,” Eve pointed out. “I don’t need the police. I just need to find the man mom talked about in her letter. She said that he’ll know what to do, and that’s good enough for me.”

He had an over-protective glint in his eyes, the same one that had driven her crazy time and time again over the years. But she couldn’t really fault him for it. It was what made him Zach…and it was one of the biggest reasons they were friends. Besides, as much as she didn’t want to admit it, he was probably right. Traveling to Vaschberg was going to be dangerous, and Eve was betting a lot on a single scrap of paper.

But she had to do
something
. If she didn’t, no one else would.

“Gregori Danev,” Zach said eventually. “That was the name, right?”

Eve nodded. “That’s who I’m going to Vaschberg to find.”