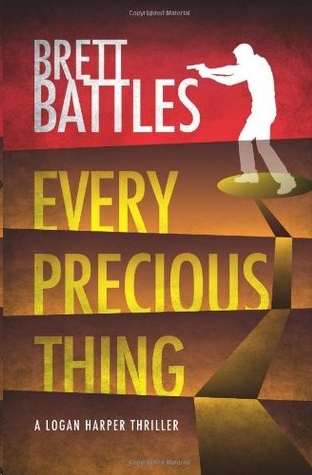 It was supposed to be a fun weekend, a celebration of a marriage and growing family. Alan Lindley couldn't have been happier...until his wife Sara disappeared.

Asked by a mutual friend to help look for her, Logan Harper is sure he'd discover a wife who simply wants out of the marriage.

What he finds instead is a woman who didn't exist, a diabolical plan, and people who would do anything to keep it a secret, including taking the life of the person most important to him.

What would you do for those precious to you?

Shadow of Betrayal (US)
/
The Unwanted (UK)

Off The Clock – A Jonathan Quinn Story

The Assignment — An Orlando Story

The Pull Of Gravity

B
RETT
B
ATTLES

For my brother and sister,

who’ve had to put up with me

“I
T’S NOT HERE
,” Sara Lindley said as she dug through her purse.

Her husband Alan looked over her shoulder into the bag. “It’s gotta be there somewhere.”

“It’s not,” she told him, her tone of desperation growing. “It’s gone.”

“But you had it earlier.”

“I
know
I had it earlier. But I’m telling you it’s gone now.”

“Could you have left it somewhere? One of the shops?”

She was already shaking her head before he finished. “I never took it out.”

“Are you sure? Maybe you did but didn’t realize it.”

She looked at him, exasperated. “Now why would I have done that?”

“I don’t know. Maybe someone asked you for ID?” he suggested, trying to keep his voice calm. “I’m just trying to think of possibilities.”

Sara closed her eyes and took a breath. “I know. I’m sorry. Here.” She held out the purse to him. “You check.”

Not taking it, he said, “Honey, I believe you.”

“A second set of eyes is always a good thing.”

He almost smiled at that. It was something he’d said to her in the past. He let her give him the purse, then carefully searched through it. She’d been right. Her passport was definitely not there.

Alan looked at the traffic that was backed up on the road beside them, each car waiting its turn to reenter the United States from Tijuana, Mexico. Unlike those in the vehicles, he and his wife had left their car in a stateside parking lot and walked in.

“Let’s retrace our steps, and see if someone found it,” he suggested. “Maybe you just dropped it somewhere.”

Though the frown on her face made it clear she didn’t think their chances of success were very good, she said, “Okay.”

Up until that point, it had been a wonderful day, finishing off an equally wonderful weekend. They were celebrating, after all. While they’d been married for nearly a year, the final piece that solidified their life together had just been completed the previous week. He was now officially the father of Sara’s two-year-old daughter, Emily. They were truly a family now, and nothing would ever take that from them. He couldn’t have been happier.

Leaving Emily with Rachel and Kurt—his sister and brother-in-law who lived in Simi Valley—he and Sara had traveled south from their home in Riverside for a pre-anniversary romantic getaway. They’d spent Saturday in San Diego, splitting time between the beach and the zoo, then on Sunday, at Sara’s suggestion, had gone even farther south to Tijuana. The plan was to drive back home that evening.

But now, Riverside might as well have been on the other side of the world, because without Sara’s passport, she wasn’t getting back across the border.

It took over an hour to check all the places they’d visited earlier, but no one had seen Sara’s dark blue booklet.

“I’m sorry,” she said, trying to hold back tears. “I don’t know what happened.”

Alan put his arms around her. “It’s okay. Don’t worry about it. We’ll just explain that it was stolen. I’m sure it happens all the time.”

“But they’re not going to let me back through,” she argued.

She was starting to get worked up again, but he knew she was right. A decade ago, a person could pass back and forth across the Mexican border with just a driver’s license, but that all changed when the towers came down. These days, no passport, no entry into the States.

“There’s got to be an American consulate in town,” he said. “Someone there will know what to do.”

He locked eyes with her and smiled again. “Sweetheart, it’s okay. Really.”

He chuckled. “Well, you’re my idiot.” He looked around. “I’ll grab a cab. I’m sure the driver will know where the consulate is.”

“I don’t have any other ID on me. Since we were together, I didn’t think I’d need my wallet. My driver’s license…it’s in the car. I’ll need that to prove who I am, won’t I?”

It took all his will to suppress a groan.

“I’m sorry,” she said. “Since I had my passport, I thought that would be enough.”

“I know.” He paused for a moment. “Here’s what we’ll do. I’ll go back and get it, while you find out where the consulate is. We’ll meet…” He looked around. There was a restaurant across the street with a bar that spilled out onto a patio. He pointed at it. “Over there. You can grab a drink while you wait.”

“I think we both do,” he said, giving her an encouraging smile. “Now which bag should I look in?”

“The red one,” she said, after a moment’s hesitation. “In the pocket on the side.”

As he started to move away, she pulled him back.

“I love you,” she said, kissing him again.

A
S ALAN CROSSED
back into the States, he explained to the officer what had happened, hoping that maybe the guy would tell him just to bring her through. What he got instead was a confirmation that a trip to the consulate was in their future.

By the time he reached their car, nearly thirty minutes had passed since he left Sara by the restaurant. Anxious to get back, he immediately unlocked the trunk and popped it open.

For a second he thought he was at the wrong car, but his key had worked, and there, against the side, was his suitcase. But where were Sara’s bags?

He leaned in and looked beyond his luggage, but it was a ridiculous gesture. No way her bags could have been behind it without him noticing.

He returned to the rear of the car and looked into the trunk once more. Why would someone only take Sara’s bags and leave his?

He was just about to pull out his cell phone so he could tell Sara what was up when he noticed the corner of an envelope sticking out from under his suitcase. He pulled it out, then nearly dropped it again when he saw his name written on the front in his wife’s handwriting.

With more apprehension than he’d ever felt in his life, he opened it and read the letter inside.

Don’t come looking for me. You won’t find me. I wish I could have told you in person, but I might never have left. Whether you can accept it or not, this is for the best. Please don’t let this affect your relationship with Emily. She’s blameless, and now, more than ever, she needs a father. She needs you. I love you. Believe that or don’t, but I do.

I hope that one day you will be able to forgive me.

He read it twice, the words so hard to understand that it almost seemed as if they were written in a foreign language. When he finally finished he stared at the paper, his mind in a haze.

A voice started deep down in his gut—a whisper at first, but soon a scream that flooded his skull, jerking him back to the here and now.

He looked toward the border crossing.

The word then spilled from his lips. “No!”

Leaving the trunk of his car wide open, he started to run.

Kosher and Traditional Jewish Cooking: Authentic Recipes From a Classic Culinary Heritage: 130 Delicious Dishes Shown in 220 Stunning Photographs by Marlena Spieler
The Adventures of Sir Gawain the True by Gerald Morris
The River King by Alice Hoffman
And None Shall Sleep by Priscilla Masters
My Mother the Cheerleader by Robert Sharenow
The Balance of Power (Godsland Series: Books Four, Five, and Six) by Rathbone, Brian
Body Parts by Caitlin Rother
Beginnings - SF2 by Meagher, Susan X
Candice Hern by Once a Gentleman
The Seduction of Miss Amelia Bell by Paula Quinn