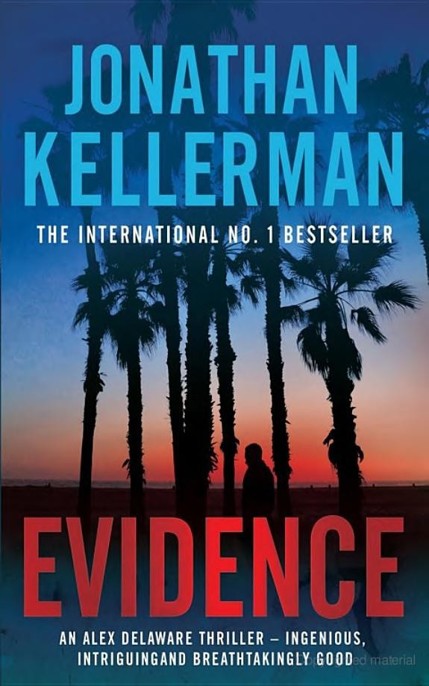 I tell
the truth. They lie
.

This
was a zero job but Doyle was getting paid.

Why
anyone would shell out fifteen bucks an hour, three hours a day, five times a
week, to check out the empty shell of a rich-idiot monster-house was something
he’d never get.

The
look-see took fifteen minutes.
If
he walked slow. Rest of the time,
Doyle sat around, ate his lunch, listened to Cheap Trick on his Walkman.

Thinking
about being a real cop if his knee hadn’t screwed up.

The
company said go there, he went.

Disability
all run out, he swallowed part-time, no benefits. Paying to launder his own
uniform.

One time he heard a couple of the other guys talking
behind his back.

Gimp’s
lucky to get anything
.

Like
it was his fault. His blood level had been .05, which wasn’t even close to
illegal. That tree had jumped out of nowhere.

Gimp
made Doyle go all hot in the face and the chest but
he kept his mouth shut like he always did. One day …

He
parked the Taurus on the patch of dirt just outside the chain-link, tucked his
shirt tighter.

Seven
a.m., quiet except for the stupid crows squawking.

Rich-idiot
neighborhood but the sky was a crappy milky gray just like in Burbank where
Doyle’s apartment was.

Nothing
moving on Borodi Lane. As usual. The few times Doyle saw anyone it was maids
and gardeners. Rich idiots paying to live here but never
living
here,
one monster-mansion after another, blocked by big trees and high gates. No
sidewalks, either. What was that all about?

Every
once in a while, some tucked-tight blonde in Rodeo Drive sweats would come
jogging down the middle of the road looking miserable. Never before ten, that
type slept late, had breakfast in bed, massages, whatever. Laying around in
satin sheets, getting waited on by maids and butlers before building up the
energy to shake those skinny butts and long legs.

Bouncing
along in the middle of the road, some Rolls-Royce comes speeding down and
kaboom. Wouldn’t that be something?

Doyle
collected his camouflage-patterned lunch box from the trunk, made his way
toward the three-story plywood shell. The third being that idiot castle
thing—the turret. Unfinished skeleton of a house that would’ve been as big as a
… as a… Disneyland castle.

Framed
up and skinned with plywood, for some reason, he could never find out why,
everything stopped and now the heap was all gray, warping, striped with rusty
nail-drips.

Crappy gray sky leaking in through rotting rafters. On
hot days, Doyle tucked himself into a corner for shade.

Out
behind in the bulldozed brown dirt was an old Andy Gump accidentally left
behind, chemicals still in the john. The door didn’t close good and sometimes
Doyle found coyote scat inside, sometimes mouse droppings.

When
he felt like it, he just whizzed into the dirt.

Someone
paying all that money to build Fantasyland, then just
stopping
. Go
figure.

He’d
brought a good lunch today, roast beef sandwich from Arby’s, too bad there was
nothing to heat the gravy with. Opening the box, he sniffed. Not bad. He moved
toward the chain-link swing gate… what the—

Stupid
thing was pulled as wide as the chain allowed, which was about two, two and a
half feet. Easy for anyone but a fat idiot to squeeze through.

The
chain had always been too long to really draw the gate tight, making the lock
useless, but Doyle was careful to twist it up, make it look secure when he left
each day.

Some
idiot had monkeyed with it.

He’d
told the company about the chain, got ignored. What was the point of hiring a
professional when you didn’t listen to his advice?

Sidling
through the gap, he rearranged the chain nice and tight. Leaving his lunch box
atop raw-concrete steps, he began his routine. Standing in the middle of the
first floor, saying, “Hel-lo,” and listening to his voice echo. He’d done that
first day on the job, liked the echo, kinda like honking in a tunnel. Now it
was a habit.

Didn’t
take long to see everything was okay on the first floor. Space was huge, big as
a … as a… some rooms framed up but mostly pretty open so you had clear views
everywhere. Like peeking through the skeleton bones of some dinosaur. In the
middle of what would’ve been the entry hall was a humongous, swooping, double
staircase. Just plywood, no railings, Doyle had to be careful, all he needed
was a fall, screw up some other body part.

Here we go, pain with every step. Stairs creaked like
a mother but felt structurally okay. You could just could imagine what it would
be like with marble on it. Like a … big castle staircase.

Nineteen
steps, each one killed.

The
second floor was just as empty as the first, big surprise. Stopping to rub his
knee and take in the western treetop view, he continued toward the rear,
stopped again, kneaded some more but it didn’t do much good. Continuing to the
back, he reached the smaller staircase, thirteen steps but real curvy, a
killer, tucked behind a narrow wall, you had to know where to find it.

Whoever
had paid for all this was some rich idiot who didn’t appreciate what he had. If
Doyle had a hundredth—a two-hundredth of something like this, he’d thank God
every day.

He’d
asked the company who the owner was. They said, “Don’t pry.”

Climbing
the curvy staircase, every step crunching his knee, the pain riding up to his
hip, he began counting out the thirteen stairs like he always did, trying to
take his mind off the burning in his leg.

When
he called out
“Nine,”
he saw it.

Heart
thumping, mouth suddenly dry as tissue paper, he backed down two steps, reached
along the right side of his gear belt.

Now
he
was the idiot, there’d been no gun for a long time, not since he stopped
guarding jewelry stores downtown.

Company
gave him a flashlight, period, and it was in the trunk of the Taurus.

He
forced himself to look.

No
one else, one good thing about the turret, it was round, mostly open to the
sky, nowhere to hide.

The way they were lying, him on top of her, her legs
up, one hooked around his back, it was pretty clear what they’d been doing.

Doyle
felt short of breath, like someone was choking him. Struggling to regain his
air, he finally succeeded. Reached for his phone.

Right
in his pocket. At least something was going okay.

Milo
calls me in when the murder’s “interesting.”

Sometimes
by the time I get involved, the body’s gone. If the crime scene photos are
thorough, that helps. If not, it can get even more interesting.

This
scene was a three-minute drive from my house and intact.

Two
bodies, wrapped around each other in a sick parody of passion. Milo stood to
the side as a coroner’s investigator clicked off shots.

We
exchanged quiet “Heys.” Milo’s black hair was slicked down haphazardly and his
green eyes were sharp. His clothes looked slept-in, his pallid, pitted
complexion matched the smog-gray sky.

I
studied the bodies from a distance, stepping as far back as I could, careful
not to touch the curving plywood wall. “How long have you been here?”

“You
don’t get to this zip code too often, Big Guy.”

The coroner’s investigator heard that and glanced
back. A tall, pretty, square-shouldered young woman in an olive-green pantsuit,
she took a long time with the camera, kneeling, leaning, crouching, standing on
tiptoe to capture every angle.

The
kill-spot was the third floor of a construction project on Borodi Lane in
Holmby Hills. Massive frame-up of an intended mansion, the entry big enough to
seat a symphony orchestra. The kill-spot looked like some sort of observation
room. Or the turret of a castle.

Massive
was the rule in Holmby. A whole different universe than my white box above
Beverly Glen, but walking distance. I’d driven because sometimes Milo likes to
think and make calls while I take the wheel.

A few
rafters topped the turret, but most of the intended roof was open space. Breeze
blew in. Balmy, but not enough air movement to mask the smell of wet wood and
rust, mold and blood and excreta.

Male
victim on top, female victim pinned beneath him, very little of her showing.

His
black designer jeans were rolled to midcalf. One of her smooth, tan legs hooked
around his waist. Brown pumps in place on both her feet.

Final
embrace, or someone wanting it to look that way. What I could see of the
woman’s hands were splayed, limp. Flaccidity of death, that made sense.

But
the leg propped up didn’t fit; how had it stayed in place postmortem?

The
man’s legs were well muscled, coated with curls of fine blond hair. Black
cashmere sweater for him, blue dress for her. I craned to see more of her,
couldn’t catch anything but dress fabric. Some kind of shiny jersey. Hiked
above her hips.

The
man’s hair was longish, light brown, wavy. A neat ruby hole stippled by black
powder punctuated the mastoid bulge behind his right ear. Blood ran down his
neck, slanted toward the right, continued
onto the
plywood floor. Long dark strands of her hair fanned wide on the floor. Not much
blood around her.

I
said, “Wouldn’t her legs have relaxed?”

The
C.I., still photographing, said, “If rigor’s come and gone, I’d think so.”

She
worked at the crypt on Mission Road, in East L.A., had managed to maintain the
rosy-cheeked glow of a habitual hiker. Lots of outdoor death scenes? Late twenties
to early thirties, rusty hair tied in a high ponytail, clear blue eyes; a farm
girl working the dark side.

Putting
the camera aside, she got down low, she used two hands to lift the man’s
midsection gingerly, peered through the resulting two-inch space. The
wraparound leg collapsed like a folding chair improperly set. “Yup, looks like
she was propped, Lieutenant.”

Looking
back at Milo for confirmation, her hands still wedged between the bodies.

The
C.I. raised the male victim a bit higher, studied, lowered him with tenderness.
The investigators I’ve seen are generally like that: respectful, swimming in
more horror than most people encounter in a lifetime, never growing jaded.

She
stood, brushed dust off her trousers. “She’s not wearing panties and his penis
is out. Obviously, there’s no erection so there’s no way they’d stay …
connected. But there is a crusty whitish stain on her thigh, so even if they
were posed, looks like they consummated.”

Hefting
a blue vinyl wallet secured by a snap button.