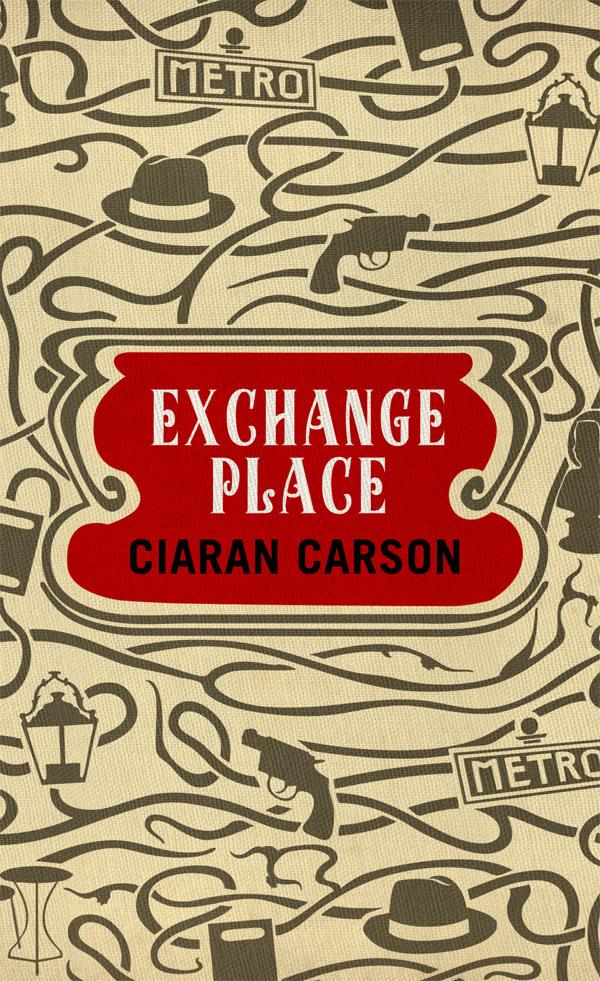 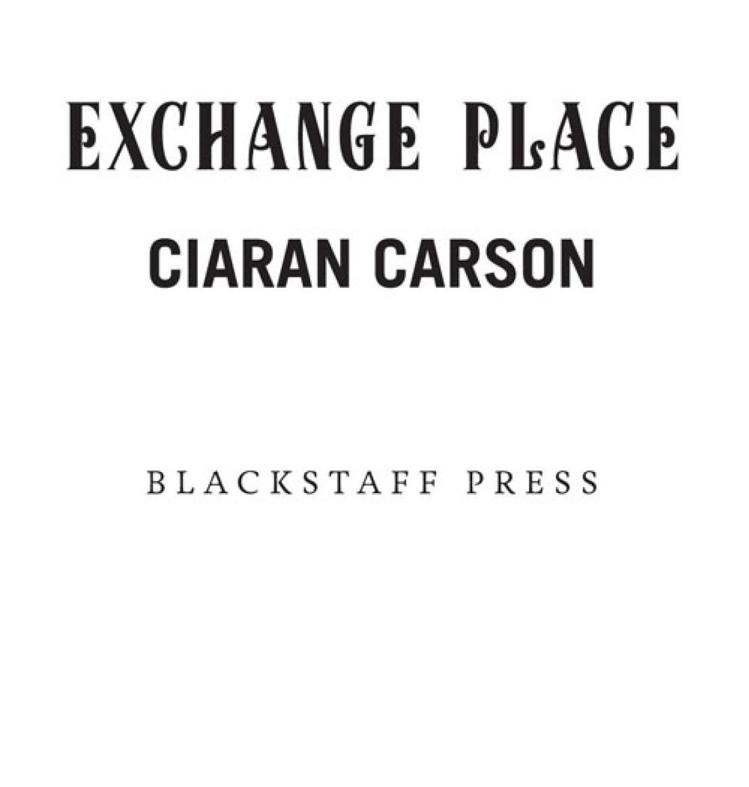 First published in 2012 by Blackstaff Press

with the assistance of

The Arts Council of Northern Ireland

The acknowledgements section constitutes an extension of this copyright page.

Ciaran Carson has asserted his rights under the Copyright, Designs and Patents Act 1988 to be identified as the author of this work.

Ciaran Carson was born in Belfast in 1948. He is the author of four prose works:
Last Night’s Fun
,
The Star Factory
,
Fishing for Amber
, and
Shamrock Tea
, which was long-listed for the Booker Prize. A novel,
The Pen Friend
, was published in 2009. He is the author of ten collections of poetry, including
Belfast Confetti
, which won the
Irish Times
/Aer Lingus Award for Irish Poetry, the Ewart-Biggs Prize, the Irish Book Award and was shortlisted for the Whitbread Prize;
First Language
, which won the T.S. Eliot Prize; and
Breaking News
, which won the Forward Poetry Prize.
Collected Poems
was published in 2008, and a book of verse translations of Rimbaud’s prose poems,
In the Light Of
, in 2012.
The Táin
, his translation of the Old Irish epic, was published in 2007. Carson lives in Belfast and is the director of the Seamus Heaney Centre for Poetry at Queen’s University. He is a member of Aosdána.

For Terry and Tara

It begins or began with a missing notebook, an inexpensive Muji
A
6
notebook with buff card covers and feint-ruled pages. On the inside cover is written, If found, please return to John Kilfeather, 41 Elsinore Gardens, Belfast
BT
15
3
FB
, Northern Ireland, United Kingdom, Europe, The World. It is one of a series of such notebooks in which I have written or scribbled over the years: notes for a book I intend to write, random observations, titles of books I have read or intend to read, quotations from books or journals I have read or skimmed, snippets of conversation overheard in bars or on buses. Lists of words. Each notebook is a record of a journey which begins without my knowing where I am going, or where I will end up. Here and there are names and addresses of people I have met on the way, sometimes in their own handwriting, sometimes in mine, which varies from near-illegible scrawl to near-calligraphic script, depending on my mood, or, to tell the truth, whatever mood-altering substance I might have taken before taking up the pen. But more of that anon.

Every so often I sift through the notebooks and carefully write up selected passages into larger,
A
5
Muji notebooks, editing as I go, trying to make sense of what has been written. I am writing these words in such a notebook. Many notebooks, whether
A
6
or
A
5
, remain unfilled as my train of thought takes another turn and I begin another notebook, turning over a new leaf as it were. I have just opened one at this passage, transcribed from a
Times Educational Supplement
, dated 20/12/02. ‘The library angel,’ it reads, ‘is a recognised phenomenon, but only by those who have encountered it. You enter a library, in search of information; you have no idea where to begin looking, and yet something directs you to a particular shelf, to take down a particular book, for no good reason as far as you can tell, but it turns out to be the very book you need.’ As it is, the particular
A
6
notebook I think I need is missing. I want this notebook because I think it contains a passage which I might well use as part of the larger narrative scheme I have in mind. It might even provide a key.

I look for the notebook in the drawers of the desk where I am writing this. I look through my bookshelves, for I have a habit of lodging notebooks in between books, books from which I have transcribed passages into the notebooks, or books which I think relevant to the writing in hand. I look in the filing cabinet. I go through the pockets of my many jackets, which hang in several wardrobes in several rooms of the house. For the present, the notebook remains missing. But I imagine it in my hands, leafing through it until I find the passage I am looking for, written a year or two or three ago under the awning of the Morning Star. I had arranged to meet a client in Muriel’s bar round the corner, but I like to arrive some thirty minutes early to relax by myself with a smoke and a drink, and the tiny al fresco smoking area of Muriel’s was full. Besides, the pleasant afternoon had clouded over suddenly; thunder was in the air. So I proceeded to the Morning Star for the time being. I sat at one of the trestle tables under the large striped awning. A young waiter took my order for a Pernod with ice and water, and I rolled a cigarette. As I did so I glanced at the only other customer in the area, sitting two tables away from me. He reminded me of someone. I lit the cigarette, took out my notebook, and began to write. I had written a page or two, and, pen poised, was about to write more when there was a flash of lightning followed by an almighty thunderclap and it began to pour rain, stair-rods of it drumming on the awning, and a gust of wind carried a flurry of raindrops on to the open notebook, spattering the words I had written in Waterman’s blue-black ink with a vintage Waterman’s Ideal fountain pen. I remember thinking that this was some kind of sign or other. I moved to a more sheltered spot, and scribbled down some more words. What I wrote then remains to be seen. It occurred to me to search the attic.

I’m standing there now, dismayed by the heaps of books, clothes, shoes, boots, picture frames, boxes of bric-a-brac or junk, cardboard files, boxes of cassette tapes, broken lamps, a scale model Spitfire aeroplane, a toy Luger pistol, an ancient word-processor, a Land camera, broken clocks, all covered in a layer of dust; I haven’t been up here in months. I pick up an unlabelled box-file, blow off the dust, and open it. It contains a typescript. The first page bears the title
X
+
Y
=
K
. To say that I had forgotten entirely about it would be an exaggeration; but it had been pushed well to the back of my mind for a long time. It is a draft of a book I wrote some years ago and then abandoned. As I skim it, bits of it are familiar; others seem written by someone else. How much of ourselves we forget.

Here, for example, was a passage I recognized as having been lifted from the work of the French philosopher Henri Bergson: ‘There is no perception which is not permeated with memories. With the immediate and present data of our senses we mingle a thousand details out of our past experience. In most cases these memories supplant our actual perceptions, of which we then retain only a few hints, thus using them as signs that recall to us former images. The convenience and the rapidity of perception is bought at this price; but hence also springs every kind of illusion.’

And here, another passage obviously shadowing the writing of another author, whose name I could not remember, no doubt originally scrawled in a notebook somewhere: ‘The city is a living organism, infected by a swarm of microbe-like practices which government was supposed to administer or suppress. But, far from being regulated or eliminated by a panoptic administration, these elements have proceeded to insinuate themselves into the networks of surveillance, reaching an accommodation which is merely concealed by the frantic discourses of the observational establishment. Bugs proliferate. Drop ceiling air spaces, closets, crawl spaces, air ducts, cavity walls, all heavily infiltrated by a variety of listening devices nominally employed by one side or the other.’

I realize I might have to reread the whole book to understand this passage fully, or what I might have meant by it. But as I skim
X
+
Y
=
K
I begin to see that some of its concerns are my concerns now: perception, memory, identity, surveillance, disappearances and appearances. And it seems I might be able to recycle some of this material – plagiarizing myself, as it were – in this other book that has been at the back of my mind for some years, as yet unwritten, for which I thought the missing notebook might provide a key. Perhaps this other book is the book I meant to write then. It concerns an erstwhile close friend, let us call him John Harland, who disappeared without trace from my life some years ago, without so much as a by-your-leave. I am still trying to figure out why.

Her Accidental Angel by Melisse Aires
King of the Asheville Coven: Harper's Mountains Vampire Romance by T. S. Joyce
The Silk Road: A New History by Valerie Hansen
Legends: Stories By The Masters of Modern Fantasy by Robert Silverberg
White is the coldest colour: A dark psychological suspense thriller by John Nicholl
An Experiment in Treason by Bruce Alexander
The Bird That Did Not Sing (DCI Lorimer) by Gray, Alex
Tomorrow About This Time by Grace Livingston Hill
Romeo's Ex by Lisa Fiedler
The Swiss Family RobinZOM (Book 5) by Perrin Briar