Read Experiment in Terror 06.5 And With Madness Comes the Light Online

Experiment in Terror 06.5 And With Madness Comes the Light 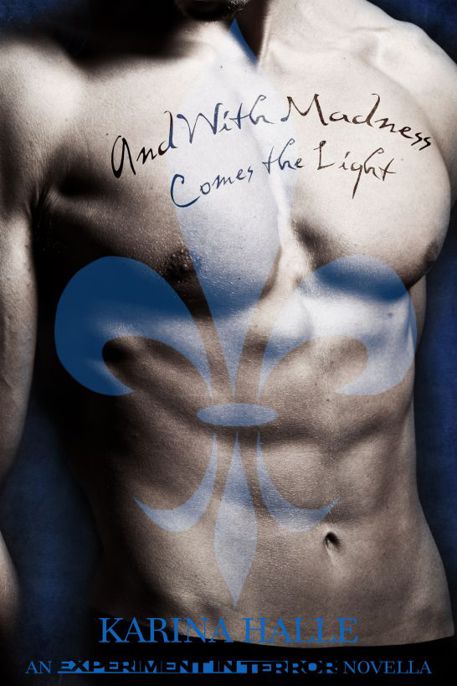 The Experiment in Terror Series

Sins and Needles (The Artists Trilogy #1)

And With Madness Comes the Light
An Experiment in Terror Novella

Publisher’s Note: This is a work of fiction.
Names, characters, places, and incidents either are the product of
the author’s imagination or are used fictitiously. Any resemblance
to actual events, locales, or persons, living or dead, is entirely
coincidental.

Copyright © 2013 by Karina Halle
All rights reserved, including the right to reproduce this book or
portions thereof in any form whatsoever.

Manufactured in the USA

For more information about the series
and author visit:
http://experimentinterror.com

“
I was head over heels in love with her. No, that
didn’t describe it. I was tear my fucking heart out and throw it at
her, beg her to take it into hers. I was falling from the greatest
heights with no safety net below. I was giving everything of my own
life for hers, giving up every inch of my soul so she could wear it
proudly. I was a former king on my knees in front of the queen. A
jester begging for a chance. I was powerless, helpless, and at her
mercy.”

There’s nothing more frightening than the
dawn that seems darker than the night. When you wait for hours for
that first glimpse of daylight, the constant reminder that our
planet is turning and life does go on, and you get only darkness
instead. Maybe the sun is out there, somewhere, and maybe the world
keeps rolling on, but fuck if I knew it. All I could see was this
darkness, this black oblivion that sucked me dry until I was
nothing but a husk of my former self. There was no light in all
this madness. My tattoo was a lie.

The morning after Perry left me—after I
created this hole—the sun never came up. I spent the night tossing
and turning on the bed in the den until I couldn’t stand the smell
of her hair on the sheets. Somehow I made it to the couch, and
somehow, when I eventually awoke, I wasn’t alone.

I wished I was.

I didn’t want to face her. Last night, she
found me crying on the floor. She helped me up, and for the first
time ever, took care of me. Maybe because the guilt she was
carrying matched my own. Maybe because that was the last time she’d
have to and she was saving the best for last.

I opened my eyes slowly. The room was grey,
monotonous, dead. She was sitting in the armchair she had pulled up
in front of me, the one she hated because I bought it at IKEA. She
looked just as awful as I did, which made me even sadder. When
Jennifer Rodriguez resembles a pufferfish with extensions you know
something terrible has gone down.

“Dex, we need to talk,” she said, her voice
hoarse. She looked down at her knees, clad in silky pajama bottoms,
her wild hair obscuring her eyes.

Usually those words make any man sit up.
Perhaps even jump out the window. I was too hollow, too weak, too
blank to do anything except lie there and watch her. She looked
different, the room looked different, nothing would ever be the
same. And though I could have found some respite in that, this
change meant losing Perry as well. And therefore, it meant
nothing.

“So talk,” I told her, because I didn’t have
the strength to do it myself. Besides, I wanted to hear it from her
own mouth. I wanted to hear her finally admit her mistakes. I
wanted—more than anything—the chance to admit mine.

She began running her lacquered nails up and
down her legs, creating lines on her pants that slowly faded in the
silk. This was hard for her. I took some comfort in that.

“I…,” she said and looked up, away from me.
Her eyes glistened with tears. If I could have cared, I would have.
No one wants to see a woman cry, even a twatwaffling she-devil. “I
think we need to break up.”

My eyes narrowed. “How haven’t I been
fair?”

She looked at me sharply. “You’re in love
with another woman.”

“And you’re in love with another man. How
long have you and Sir Douche, I mean Bradley, been going on
for?”

She slid over the insult with ease. “How
long have you and Perry been going on for?”

“Yeah, well, I guess you win then,” she
said, pulling her hair off her face. She really was such a
beautiful girl. No wonder I had been blind for so long. She had
ways of making you feel like the luckiest man on earth, just
because you were seen together. She made you wonder,
why me?
But I knew why. Because I was safe too. We both used each other as
a safety net until the holes got too big.

And I definitely wasn’t the winner here. Not
by a longshot.

“So, if we’re both being honest for once,
tell me…how long?” I repeated.

She let out a pained sigh. “Since…since you
left Wine Babes. Since you left me.”

I really didn’t want to get pulled into
another argument over my departure; all of that shit was a moot
point now. And, surprisingly enough, it didn’t sting as much as I
thought it would. I guess my pride really had been demolished
during the night.

She shrugged. “Why didn’t you?”

“I didn’t know how she felt,” I said
quietly, staring at the carpet.

She snorted. “Right. Dex, that girl was head
over heels in love with you. And you were in love with her. I knew
it from the moment she walked into this apartment. You looked at
her in a way that you’ve never looked at me. And she looked at you
in the way I never did. You could have done this properly, you
know.”

“I’m sorry we can’t all fuck other people
behind each other’s back,” I snarled.

She crossed her legs and folded her hands
together, the Latino bite coming back. “Right. Okay, Dex. Like you
didn’t fuck her here last night.”

“It was just once,” I told her, hiding a
white lie.

“I can see that. It’s not my fault that you
had to screw it all up after.”

Actually it kind of was. “You cheated on me
constantly.”

She leaned forward so her puffy eyes were
just inches away. “And so did you. I may have been screwing Bradley
with my body but you were fucking Perry with your heart. And which
one is worse, huh?”

I bit down on my lip until I tasted blood.
Finally, I said, “There’s nothing worse than that.”

She nodded, a flash of open vulnerability on
her face. “We both screwed up.”

“I guess we couldn’t just break up like
normal people.”

I managed a smile. “Jenn, you know I’m not
normal.”

She smiled back, wistful. “I know.” She
reached over and grabbed my hand, giving it a quick squeeze. It
would be the last time Jenn would ever touch me.

Later that day, she made plans to move in
with Bradley. She decided to leave Fat Rabbit behind since the dog
always liked me better anyway, and Metro Von Dickfucker had an
apparent allergy to dogs. She packed up her ugly cheetah-print
suitcase, told me she’d be back in a couple of days to get the rest
of her stuff, and wished me luck.

I needed all the luck I could get.

The next few days before Jenn came to get
her stuff were an absolute write-off. Rebecca kept calling me and I
kept thinking about calling Perry. I wouldn’t answer anyone’s
calls, and Perry wouldn’t answer mine. I couldn’t eat, I couldn’t
shit. I drank myself into a stupor, and the only time I left the
apartment was to take Fat Rabbit out around the block. The rest of
the time, I just left the balcony door open and the little bastard
did his business out there. I was too empty inside to care if our
apartment was turning into Turd City.

I’m not one to wallow in self-pity, really
I’m not. The last time I did that, I ended up in a mental
institution on extremely strong drugs, pining after Abby, a girl
who would later turn up dead. And then, years later, end up in my
apartment. Still dead.

But Abby never came. And, to be honest, I
was kind of disappointed. How fucking lonely was I, to be craving
the company of a deranged ghost? No, this time I was so completely
and utterly alone. I had no one but a smelly dog, and even he was
starting to resent me for the deteriorating conditions.

I just didn’t see the point in anything.
While my thoughts weren’t exactly suicidal, I entertained the idea
of ending it all. I knew I would never do it, but I fantasized
about how easy it would be. How no one would care. And how quickly
the pain would stop. I didn’t want to die but I didn’t want to live
either. Living, breathing, existing from day to day only added to
the weight on my heart.

Shut the fuck up, man. Get over it. Shape up
or ship out. Don’t think I wasn’t yelling those things in my head.
But when the fuck did my head and heart get along anyway? They were
mortal enemies now, sworn to rip each other to shreds.

I fucked up. More than I have ever fucked up
before. I had the love of my life in my hands for one beautiful,
exquisite moment before I ripped her apart and my heart bore the
paper cuts. Perry…I’d never see her smiling face again. I’d never
hear her melodic voice. I’d never be able to make her laugh or
cringe or yell at me. God damn it, even if she would pick up her
phone, scream at me, and give me eternal hell for the way I acted
after we slept together, it would make me whole again. But there
was nothing but silence. Nothing but darkness.

It took Jenn and Fuckface barging in the
apartment while I was sleeping (okay, so it was the middle of the
day), to bring me out of my first funk. Jenn ran in the room waving
her arms above her head like a muppet, screaming at me over the
state of the apartment, and threatening to call the SPCA for Fat
Rabbit. I knew she was right. And when I heard the disappointed
noises from Bradley in the living room, I realized I still had a
smoldering coal of pride left in me. Abercrombie & Douche
wasn’t going to get both my ex-girlfriend and a coat of
self-righteousness.