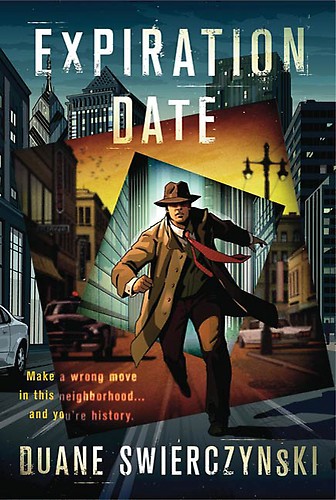 “Swierczynski writes a brand of thriller whose pacing forces us to reexamine our casual use of the word
breakneck
…. This is essentially one long action scene that begs for the next Tarantino to direct. But if that sounds like faint praise, it isn’t: there are both enough cliché killers and comedy to make us raise two thumbs up. If you want your thrillers to be, well, thrilling, pop a big bowl of corn—you won’t leave your seat until the end.”

“The best word to describe Swierczynski’s latest thriller is
frenetic
, and even that is likely an understatement.”

“This action fest moves swiftly to its darkly satisfying conclusion.”

“A guilty pleasure of unparalleled magnitude, with pedal-to-the-metal pacing, characters who appear to be meek cubicle dwellers à la
Office Space
but are really cold-blooded black-ops killers, and enough gut-churning violence to make a Quentin Tarantino movie look like a Disney musical replete with singing candlesticks and teapots. The dark, twisted energy in this novel is palpable.”

“Wildly violent and way funny, the book’s a summer blockbuster waiting to be filmed. Grade: A-.”

“Duane Swierczynski speeds through his action-filled plot, replete with bloodshed, mayhem, and twists. His prose draws the reader in, and his short chapters and revved-up action sequences make
Severance Package
a one-sitting read…. This novel is as powerful as an unexpected punch in the stomach.”

Praise for
The Blonde

“This is delicious postmodern hard-boiled punk rock storytelling. Swierczynki’s hit man character is as funny and fresh as he is fierce and quick.
The Blonde
is masterfully paced, wonderfully rendered, and devastatingly entertaining.”

“Duane Swierczynski’s new novel,
The Blonde,
is as lean as a starving model, mean as a snake, and fast as a jet. It’s also one hell of fine read. This guy has got to be the hottest new thing in crime fiction, and
The Blonde
is one of the best crime reads I’ve had in some time.”

“Page-turning tension…a story so bizarre that it just might be true.”

“A hilarious nail-biter, a tour-de-force by a young writer who has already carved out this unique take on the crime genre, so it’s futile to compare it to anything else…. It is sui generis. It is perfect.”

—Laura Lippman, bestselling author of
What the Dead Know

“Another fast, funny, and action-packed outing from a writer who, fortunately for us, doesn’t seem to know how to slow down.”

“Quite a ride. The prose is hard-boiled enough to crack walnuts and the action more precipitous than a bobsled run.”

“Mr. Swierczynski knows how to streamline a story, keep the pace breakneck, sucking all the oxygen out of the room while he tells you this very gritty and nervy story about a pickup gone wrong. Delicious dialogue, funny realizations, and one hell of a ride.”

Praise for
The Wheelman

“If you are partial to fast-paced thrillers that present this world as an unforgiving, blood-soaked wasteland, you should love Duane Swierczynski’s first novel. Swierczynski’s novel, like those of [Elmore] Leonard, offers an undertow of humor beneath the churning sea of man’s inhumanity.”

“Swierczynski has an uncommon gift for the banal lunacy of criminal dialogue, a delightfully devious eye for character, and a surprisingly well-developed narrative for a beginner.”

“Adrenaline-charged…fast-moving and funny,
The Wheelman
is Mr. Toad’s Wild Ride in an R-rated amusement park.”

“I canceled a night out and stayed up all night reading. That’s how much I loved this book…at every turn, I was blindsided. Hilarious and bloody violent.”

—Ken Bruen, author of the Shamus Award–winning
The Guards

“A great heist story in the rich tradition of Richard Stark’s Parker novels and Stanley Kubrick’s
The Killing
…keeps readers holding their breath to see what’s going to happen next. It is clearly the work of a maturing writer who is possessed of a keen style and abundant talent.”

“Dark stuff…hilariously funny at the same time. Swierczynski has come up with his own twisted and thoroughly enjoyable genre. Bring on some more, sir.”

III
The Thing with Three Fingers

VI
This Could Be the Last Time

XII
How It Ends

(XIII)
My Other Life 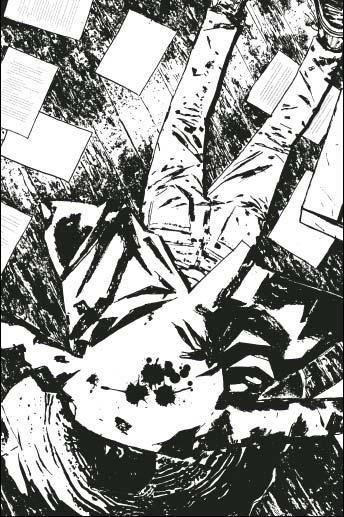 See that body sprawled on the hardwood floor, marinating in a pool of his own blood?

Five minutes ago I was shot in the back. Three times, right between the shoulder blades. The guy who runs the late-night beer bodega downstairs, Willie Shahid, heard the shots—
bang bang bang
—then saw somebody with a revolver go shuffling down Frankford Avenue. After a few minutes, he walked upstairs to check it out.

Now Willie’s outside the apartment door. He knocks, and then waits a second. Something’s not right. He sniffs the air; the acrid scent of chalk and burnt paper fills his nostrils.
Gunpowder.
It’s not an unfamiliar scent to Willie Shahid. Not in this neighborhood.

Watch Willie Shahid take out his cell and dial 911, giving the proper address and even the floor. Guy’s a real pro.

If you hang around a little longer, you’ll see the EMTs arrive, and then the Philly PD, 15th District. They’ll move me to a stretcher and carry me out the front door of the building, under the rumbling El train and past a bunch of dudes in oversized white T-shirts and deadpan expressions.

Soon the surgeons at nearby Frankford Hospital will dig the slugs out of my back, place them in a kidney-shaped steel tray. From there, they’ll transfer them to a plastic evidence bag and send it down to the Philadelphia Police Department’s forensics lab at Eighth and Race. Standard procedure—bullets from GSWs always go right to the lab for ballistic analysis.

A few days later confusion will sweep over the forensics guys’ faces. Identifying the type of bullet will be no problem: .38 caliber.

No, something else will trouble them.

After analyzing the slugs and gunpowder, the CSI guys will determine that the bullets are at least forty years old. They’ll also discover that this specific type stopped being manufactured back in 1967.

Now, old bullets can still work. But they’ll have to be asking themselves: Why use forty-year-old ammunition to snuff somebody?

Some people have the idea that when you die your life flashes before your eyes, like a movie on fast-forward.

Time’s arrow only appears to fly straight when you’re alive. Dead is something else. Once you cross that invisible line, you see things how they really are. You see that every moment seems to happen all at once.

Which makes telling this story—or the most important parts of it, anyway—difficult. Usually, you start at the beginning. Or the middle, so the listener doesn’t get bored.

Problem is, I’m very hazy on the beginning and the middle, as I came in during the end. I can speculate, but it’d be nothing more than a wild guess.

I guess I should start with the day I moved into the apartment and went back in time.