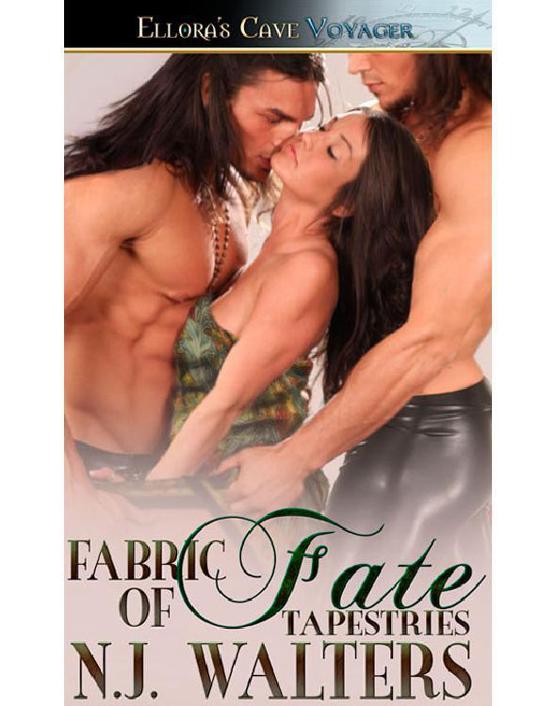 Sixth in the Tapestries series.

Audrey Brennan is married to her job as an ad executive. Her work environment is fast-paced, competitive and cutthroat. When a panic attack brought on by stress and overwork lands her in the hospital, she’s forced to examine her life choices. Before she can make any decisions, a beautiful tapestry filled with magic whisks her away to a strange world, where men compete sexually to win a woman.

In Javara, women are in short supply and brothers must share. Abrah Dannon has given up hope that either he or his brother Heroc will ever have a wife. But a wild storm brings an unexpected gift to his doorstep—a woman.

For the next three days, both brothers will use all the sensual skill at their disposal to seduce and pleasure Audrey so she will want to stay in Javara with them. But there’s more at stake than simply hot sex. Their hearts are hers for the taking if she’s willing to risk the chance.

Photography and cover design by Syneca

Thank you to all the fans of the Tapestries series. So many of you wrote asking about the Dannon brothers I had to write their story.

As always, my thanks to my husband, who inspires me daily with his love and support.

The wind pummeled Dannon Keep, whistling through a crack in one of the thick stone walls. The rain battered the slate rooftop and wooden shutters, but was denied entrance. Abrah Dannon sat with his booted feet toward the roaring fire, elbows resting on the heavy wooden arms of his chair and fingers steepled together. His faithful wolfhound Carn lay asleep at his feet. He peered into the crackling embers wishing he could observe the future there, but all he could see in the flickering flames were images from the past.

It had been a hard, brutal year. Illness had struck his home with a vengeance and, in spite of all his best efforts, the fever had taken his mother and youngest brother in the span of a week. By the time help and medicine had arrived from Castle Garen it was too late, at least for them. Others under his protection had fared much better than his family had. Now only he and his brother Heroc remained.

As if he’d summoned his brother with his thoughts, the door flew open and Heroc stomped inside, bringing the wild weather with him. He pushed his full weight against the door, muscles straining as he shoved it shut. The roar of the wind was abruptly cut off and relative silence ruled once again. His brother slammed the heavy bar across the door, bolting it for the night. “It’s a fierce one.”

Abrah didn’t bother to reply but went back to studying the flames. Carn raised his head long enough to glare at Heroc for disturbing his sleep, gave a huff and closed his eyes again.

The cold, stormy season was upon them, the harvest long in from the fields. The people of Dannon Keep had more than enough food to see them through. No, it wasn’t the thought of an empty belly that bothered Abrah. It was something far less tangible—an empty heart.

Heroc took off his heavy overcoat and shook the rain from the tanned leather before hanging it on a peg by the door. He strode across the room and threw himself down into a matching wooden chair and stared at his brother. “It will get better.”

He wished he shared his brother’s optimistic nature, but he was a realist. “Will it?”

“You must keep hope, Abrah.” Heroc jumped up from his chair, went to the sideboard and poured two tall mugs of ale that Tara, their housekeeper, had left before she’d retired to her home for the evening. There was no one in the castle except the two brothers and the resulting emptiness was oppressive.

“All is well?” Abrah didn’t want to talk about hope. He feared he no longer had any.

“Yes.” Heroc brought both mugs with him and handed one to his brother. “The gates are closed and locked for the night, the animals are all safely tucked away, there are men posted on the walls and the rest are in the barracks out of this miserable weather.”

It was always this way. Each year the cold season came with its rain and stormy winds, keeping everyone inside for several months. It made a man restless. Gave him too much time to think. “Good.”

Heroc took a swig of ale and wiped his mouth with the back of his hand. “We’ll need to check all the buildings when the storm lets up.”

There was always a never-ending list of things to do when one was responsible for so many others. Thankfully, he had his brother to help him shoulder the load. “First light if the wind is down.”

They sat in silence for a long time. The fire gradually died down to a flicker but neither man rose to tend it. “I miss them.”

Abrah turned to his brother and felt the same sense of loss and longing. The pain was still fresh. “I know. I do as well.”

The Dannon family had been all but wiped out these past three years. While hunting in the mountains, a freak landslide had killed their father, and their uncle had dropped dead not a year later of a weak heart. With the more recent deaths of their mother and brother a dark cloud seemed to hang over all of them.

“Will we go to the festival?”

The festival marked the end of the cold season and the beginning of the planting season. Families gathered from far and wide to socialize and share information, buy and trade animals and seeds, but mostly so that any unwed daughters could meet as many unwed men as possible.

In Javara women were in extremely short supply and brothers shared a woman. Only one brother was able to marry her and claim the children as his own, but the other brothers were allowed one night a week in her bed. That kept the population strong and men from killing one another to claim a woman.

Abrah shook his head. “I see no reason to attend.” There was nothing they couldn’t obtain from neighboring allies if there was a need and there was no point in searching for a bride. There would be no new women looking to wed this year. All the ones of age had been married off in the last twelve months.

Heroc sighed and Abrah wished he could offer his brother some solace, but he had none to give.

“The tapestry—” his brother began, but Abrah cut him off.

“Has not been seen in three years. It’s also been here an unprecedented number of times in our lifetime.” The tapestry was a magical creation, a gift from a powerful sorceress who brought women from other places and times to Javara as prospective brides. It usually brought one per generation and only a woman who had the ability to thrive in their world. Some women stayed, others did not. It was always the woman’s choice and she had three days to make it.

“But the rules of the tapestry seem to have changed. Maybe there is hope.”

Abrah rubbed a hand over his face, his heart aching at the deep need in his brother’s voice. “Maybe.” He would say no more, would not give false hope, but neither would he dash his brother’s meager optimism. They both knew the chance of another tapestry bride coming to their world was slim to none. A chance of one coming
here
and actually staying wasn’t even in the realm of possibility. There were so many other families out there, so many other men who wanted a woman.

The room was cold now and not just because the fire was little more than dying embers. Abrah stirred and pushed himself out of his chair. Carn slowly climbed to his feet and waited patiently. Tomorrow would come soon enough and, with it, work needing to be done. “I’m for bed.”

Abrah dropped his hand on his brother’s shoulder and gave it a squeeze before heading up the winding staircase at the end of the room. His feet made little sound on the stone as he went up the stairs and down the short hallway to his room, but Carn’s toenails made a sharp clicking sound as he kept pace. He barred the door behind them.

Carn immediately went to the front of the empty hearth, dropped to the floor and curled up to sleep. Ignoring the chill, Abrah stripped off his clothing and crawled into bed hoping to lose himself for a few hours in pleasant dreams.

Audrey Brennan stared at her computer screen and ignored the incessant beeping of her phone. Her fingers flew over the keyboard as she refined her presentation, tinkering with the phrasing and font type. Time was of the essence. The client would be here within minutes.

A sharp rap on the door was quickly followed by it opening. Her assistant Gwen poked her head inside. “Ten minutes.”

“I know. I know,” she muttered under her breath and waved Gwen away. She hit
print
and sat back as pages began to spit out of the machine at a rapid rate.

Audrey rubbed her tired eyes. They were burning from lack of sleep. This last campaign had been a killer with the client changing his mind almost daily, but she had it now. The perfect tagline and punch for the print and television ads. The final piece of an already perfect puzzle.

The storyboards were set up in the conference room along with some preliminary photos and the PowerPoint presentation. Everything was ready.

She reached for her coffee cup only to find it empty. A quick glance told her the pot sitting on the credenza was also empty. Had she really drunk the whole pot herself? The burning in her stomach told her that she certainly had. It was only 9:50 in the morning but she’d been at work for almost five hours. Of course, she hadn’t left work until midnight the night before, so she was operating on about three hours of sleep and a gallon of caffeine.

“Just get through this and you can have a long rest and some decent food.” Of course, she was lying to herself. Once this campaign was nailed down there would be another one and another one. It had been like this for—she paused to count—ten years now. Where had the time gone?