Read Factfulness: Ten Reasons We're Wrong About the World – and Why Things Are Better Than You Think Online

Factfulness: Ten Reasons We're Wrong About the World – and Why Things Are Better Than You Think 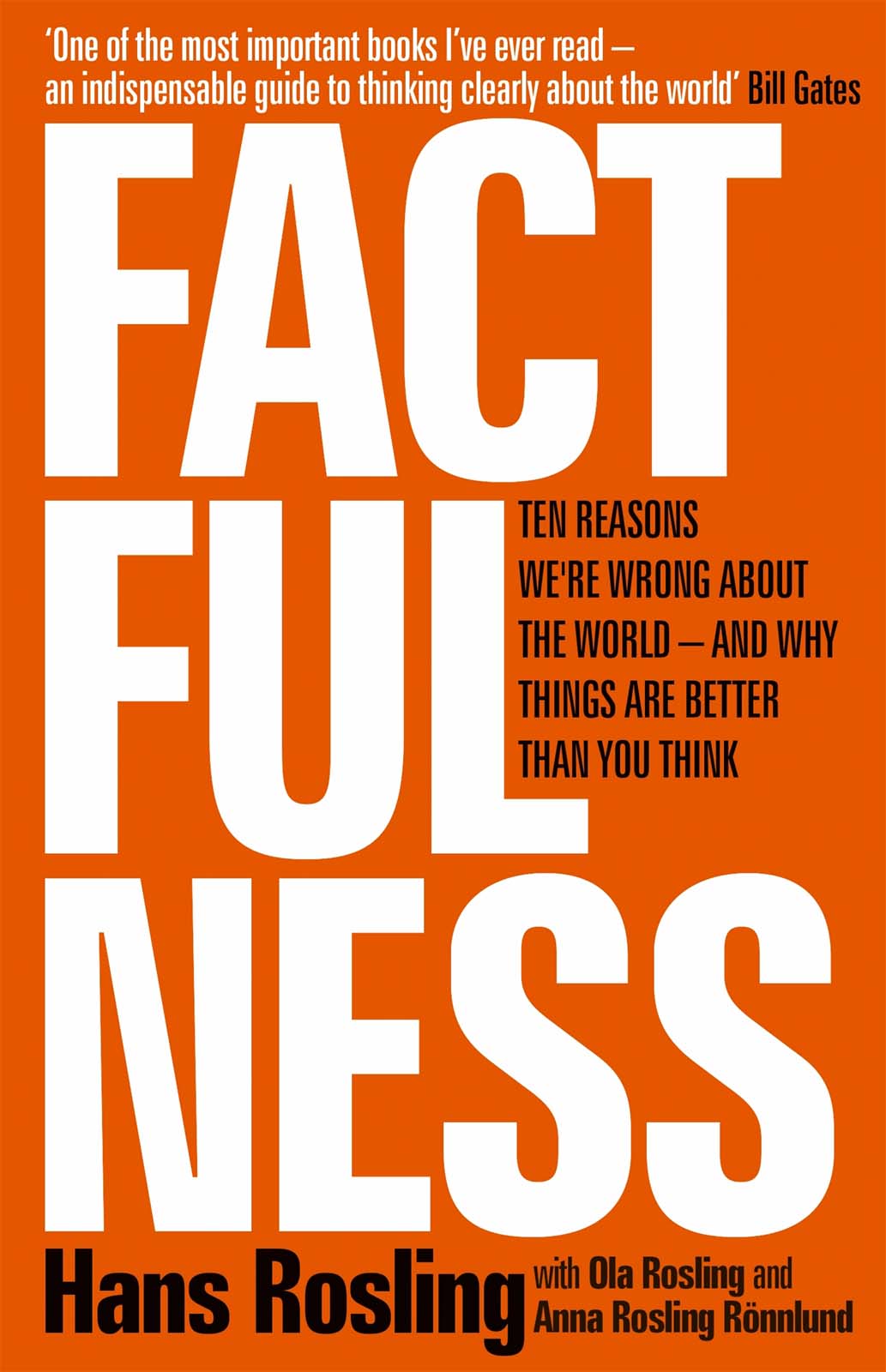 Hans Rosling
was a medical doctor, professor of international health, and renowned public educator. He was an adviser to the World Health Organization and UNICEF, and he cofounded Médecins Sans Frontières in Sweden and the Gapminder Foundation. His TED talks have been viewed more than thirty-five million times, and he was listed as one of Time magazine’s one hundred most influential people in the world. Hans died in 2017, having devoted the last years of his life to writing this book.

Ola Rosling and Anna Rosling Rönnlund
, Hans’s son and daughter-in-law, are cofounders of the Gapminder Foundation, and Ola its director from 2005 to 2007 and from 2010 to the present day. After Google acquired Trendalyzer, the bubblechart tool invented and designed by Anna and Ola, Ola became head of Google’s Public Data Team and Anna became the team’s senior user-experience (UX) designer. They have both received international awards for their work.

First published in Great Britain in 2018 by Sceptre

The right of Factfulness AB to be identified as the Author of the Work has been asserted by them in accordance with the Copyright, Designs and Patents Act 1988.

Illustrations and charts are based on free material from the Gapminder Foundation, designed by Ola Rosling and Anna Rosling Rönnlund.

To the brave barefoot woman,
whose name I don’t know but whose rational arguments
saved me from being sliced
by a mob of angry men with machetes

CHAPTER ONE:
The Gap Instinct

APPENDIX:
How Did Your Country Do?

Factfulness
is written in my voice, as if by me alone, and tells many stories from my life. But please don’t be misled. Just like the TED talks and lectures I have been giving all over the world for the past ten years, this book is the work of three people, not one.

I am usually the front man. I stand onstage and deliver the lectures. I receive the applause. But everything you hear in my lectures, and everything you read in this book, is the output of eighteen years of intense collaboration between me, my son Ola Rosling, and my daughter-in-law Anna Rosling R
ö
nnlund.

In 2005 we founded the Gapminder Foundation, with a mission to fight devastating ignorance with a fact-based worldview. I brought energy, curiosity, and a lifetime of experience as a doctor, a researcher, and a lecturer in global health. Ola and Anna were responsible for the data analysis, inventive visual explanations, data stories, and simple presentation design. It was their idea to measure ignorance systematically, and they designed and programmed our beautiful animated bubble charts. Dollar Street, a way of using photographs as data to explain the world, was Anna’s brainchild. While I was getting ever angrier about people’s ignorance about the world, Ola and Anna instead took the analysis beyond anger and crystallized the humble and relaxing idea of Factfulness. Together we defined the practical thinking tools that we present in this book.

What you are about to read was not invented according to the “lone genius” stereotype. It is instead the result of constant discussion, argument, and collaboration between three people with different talents, knowledge, and perspectives. This unconventional, often infuriating, but deeply productive way of working has led to a way of presenting the world and how to think about it, that I never could have created on my own.

INTRODUCTION
Why I Love the Circus

I love the circus. I love to watch a juggler throwing screaming chain saws in the air, or a tightrope walker performing ten flips in a row. I love the spectacle and the sense of amazement and delight at witnessing the seemingly impossible.

When I was a child my dream was to become a circus artist. My parents’ dream, though, was for me to get the good education they never had. So I ended up studying medicine.

One afternoon at medical school, in an otherwise dry lecture about the way the throat worked, our professor explained, “If something is stuck, the passage can be straightened by pushing the chin bone forward.” To illustrate, he showed an X-ray of a sword swallower in action.

I had a flash of inspiration. My dream was not over! A few weeks earlier, when studying reflexes, I had discovered that of all my classmates, I could push my fingers farthest down my throat without gagging. At the time, I had not been too proud: I didn’t think it was an important skill. But now I understood its value, and instantly my childhood dream sprang back to life. I decided to become a sword swallower.

My initial attempts weren’t encouraging. I didn’t own a sword so used a fishing rod instead, but no matter how many times I stood in front of the bathroom mirror and tried, I’d get as far as an inch and it would get stuck. Eventually, for a second time, I gave up on my dream.

Three years later I was a trainee doctor on a real medical ward. One of my first patients was an old man with a persistent cough. I would always ask what my patients did for a living, in case it was relevant, and it turned out he used to swallow swords. Imagine my surprise when this patient turned out to be the very same sword swallower from the X-ray! And imagine this, when I told him all about my attempts with the fishing rod. “Young doctor,” he said, “don’t you know the throat is flat? You can only slide flat things down there. That is why we use a sword.”

That night after work I found a soup ladle with a straight flat handle and immediately resumed my practice. Soon I could slide the handle all the way down my throat. I was excited, but being a soup ladle shaft swallower was not my dream. The next day, I put an ad in the local paper and soon I had acquired what I needed: a Swedish army bayonet from 1809. As I successfully slid it down my throat, I felt both deeply proud of my achievement and smug that I had found such a great way to recycle weapons.

Sword swallowing has always shown that the seemingly impossible can be possible, and inspired humans to think beyond the obvious. Occasionally I demonstrate this ancient Indian art at the end of one of my lectures on global development. I step up onto a table and rip off my professorial checked shirt to reveal a black vest top decorated with a gold sequined lightning bolt. I call for complete silence, and to the swirling beat of a snare drum I slowly slide the army bayonet down my throat. I stretch out my arms. The audience goes wild.

This book is about the world, and how to understand it. So why start with the circus? And why would I end a lecture by showing off in a sparkly top? I’ll soon explain. But first, I would like you to test your knowledge about the world. Please find a piece of paper and a pencil and answer the 13 fact questions below.

1. In all low-income countries across the world today, how many girls finish primary school?

2. Where does the majority of the world population live?

3. In the last 20 years, the proportion of the world population living in extreme poverty has …

B: remained more or less the same

4. What is the life expectancy of the world today?

5. There are 2 billion children in the world today, aged 0 to 15 years old. How many children will there be in the year 2100, according to the United Nations?