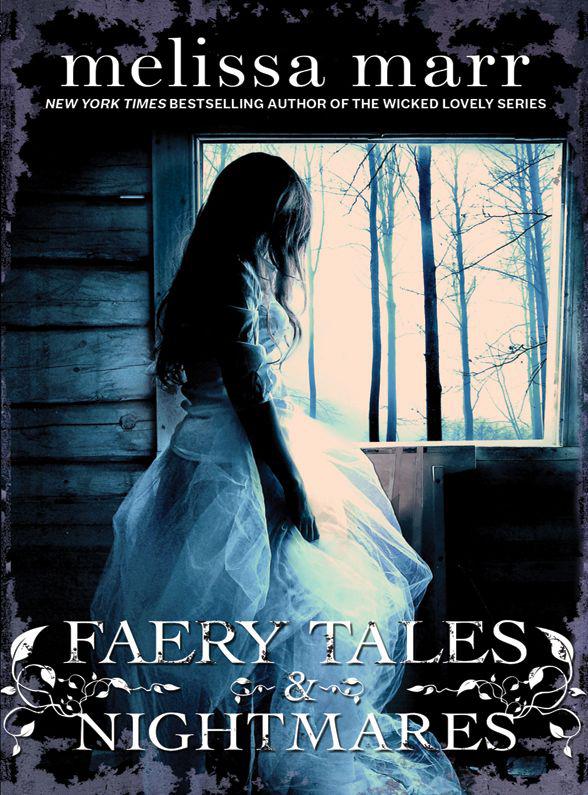 (aka the wonderful readers

on the WickedLovely.com fan site),

who’ve been such a joy to me

these past several years
.

Thank you for conversations,

T
HE
A
RT OF
W
AITING

A
BOUT THE
P
UBLISHER

I
T’S NOT ALWAYS AS EASY TO SEE THE PATH
when you’re on it, but looking back is often much clearer. In 2004, I wrote a short story, “The Sleeping Girl,” that turned into a novel (
Wicked Lovely
) that evolved into a series. At the time, I was homeschooling my kids, reading adventure with my son and YA books with my daughter, and still teaching university. A few years before that, I’d taught two defining courses. One was called “Girlhood Narratives.” It started with fairy tales and worked forward into novels. The second was simply called “The Short Story.” In retrospect, it’s pretty easy to see that my children and my teaching were influential in writing the fairy tale that started my career.

Since then, I’ve continued to mix fairy tales and folklore together in novels and short stories. They’re scattered in anthologies, ebook-only editions, and special editions of my novels, so I figured it might be nice to have some of them together in one book.

Well over half of these pages are taken up by Wicked Lovely world stories; the rest of the pages are reserved for other worlds. These are stories pulled from lore and nightmares, set in places I’ve visited and places I’ve imagined. In the tales, you’ll find a selchie story influenced by Solana Beach, CA; a tale of vampires inspired by parties I once went to in a dead-end town I won’t name; a goblin encounter set in the woods where I once picked berries; and a tale of dark contentment in a mountain town that owes a debt of gratitude to a Violent Femmes song I love. Of course, you’ll also spend time with the Wicked Lovely faeries who have lived in my head and my novels since 2004. I hope you enjoy them.

T
HE GREEN GLOW OF EYES AND SULFUROUS
breath shimmer in the fog as the Nightmares come into range. The horses’ steel-sharp hooves rip furrows in the field, trampling everything in their path.

“Over here!” my companion dog calls out to them, exposing me.

I didn’t know he could speak, but there is no mistaking the source of the sound—or the fact that I am trapped in a field with Nightmares bearing down upon me.

The dog shakes, and his glamour falls away like water flung from his fur. Under his disguise, my helpmate is a skeletal beast with holes where its eyes should be.

I hobble toward an oak that stands like a shadow in the fog.

“Faster!” it calls out to the Nightmares, which are almost upon me.

The only question left to answer is whether their running or my climbing is quicker.

O
NCE—A LONG TIME AGO BEFORE
C
HANGE
had come—there was a girl whose father was a king. Now, this was when there were a great many kings, so Nesha did not think it strange to be the daughter of a king. And though she had no brothers or sisters, Princess Nesha was happy—but for one thing. Nesha had within her the kiss of winter. When she sighed, her breath rolled out in an icy chill. When she blew a kiss to her father across their great hall, frost flowers formed on every dish.

In winter, Nesha could drape snows over every hill without fear, but in the summer, if she forgot herself and blew the white tops of dandelions gone to seed, if she laughed too freely and her cold breath spilled out, she would wither whole fields, blighting the crops her people needed to survive.

Her father built her a great tower with no windows through which her cold breath could escape, but Nesha wept at being alone and enclosed.

So Nesha left her tower and sought out her father in the great hall. Gazing at the fields she could see through the tall window before her, she said, “I do not belong in this place with its long months of warmth and sun.”

Though he knew she was right, the king wept, for he loved his daughter. “Nesha, stay. We can find a way.”

She turned and rested her head against her father’s shoulder, thinking of the windowless room and months indoors, of trying not to laugh for fear of the cold air that slipped through her lips. “No. I must go.”

The king’s warm tears fell onto her cheek, but he said nothing.

Nesha did not sigh or weep; she gazed out the window at the new plants in the fields, wondering why she had been cursed so cruelly.

The next morning the king walked his daughter to the edge of the wood. He held her only briefly. “Be safe.”

After a few silent tears, Nesha clutched her staff and strode off into the dark wood.

She traveled for many days. One evening as she sat on a felled tree, she let her eyes drift closed. She imagined the icy rim that encircled the northernmost edge of the land, hoping she would soon reach it, and worrying she would not find welcome once she did.

When she opened her eyes, a great ice-bear stood before her. The bear lay down at her feet, his fur glistening as if he had been bathed in precious oils.

“What are
you
doing here?” she murmured, her voice trembling only a bit.

As Nesha looked into his eyes, she saw her own nervousness reflected there, and her fear disappeared like frost under a spring sun. “Are you lonely too?”

So she closed her eyes and exhaled gently—giving the bear thick snow upon which to rest.

The ice-bear stretched out in the snow and stared up at her until she climbed from the log and sat next to him.

She opened her pack and drew out a piece of thick meat. She broke off a small piece for herself, then offered the rest of the meat to the bear.

The ice-bear gently accepted the meat from her hand.

“Perhaps we can be lonely together.” Nesha lay down to rest alongside the bear in their pile of snow.

When Nesha awoke the next morn, she found that the bear had curled around her, holding her body close to his furred limbs.

After a small meal, Nesha readied herself to travel.

The ice-bear lay flat in front of Nesha and glanced at her. He tossed his head toward his back.

Nesha ran her hand over his thick pelt. Then, she stepped past him. “Come. If you’re to travel with me, we must be off.”

The ice-bear bounded past Nesha, and once again lay prostrate before her.

She laughed and stepped past him once more. “We’ll not get far if we stop to play.”

For the third time the ice-bear leaped before her—this time, though, when he stretched his great length across the path, his body spanned the space between two boulders. She could not walk around him.

Grumbling, Nesha began to climb over him, but once she was atop his back, he stood.

“Oh,” she murmured, awed that such a great beast would carry her. She was still tired from her days of walking, so she said, “For a short while, I suppose there’s no harm in it.”

So, atop the ice-bear, Nesha journeyed through the forest. The only sounds were the rippling of waters and the cries of creatures in the dense canopy overhead. A solitary owl called out from a hidden perch; squirrels chattered in their secret language. And despite her worries, Nesha felt joy as the bear ambled under pine boughs and outstretched branches.

The King's Damsel by Emerson, Kate
Incomplete by Zart, Lindy
Red Spikes by Margo Lanagan
Swimming to Tokyo by Brenda St John Brown
Miss Me Not by Tiffany King
Ghost Towns of Route 66 by Jim Hinckley
The Pack by LM. Preston
From Single Mum to Lady by Judy Campbell
Hard Rain by Rollins, David
Update On Crime by Carolyn Keene