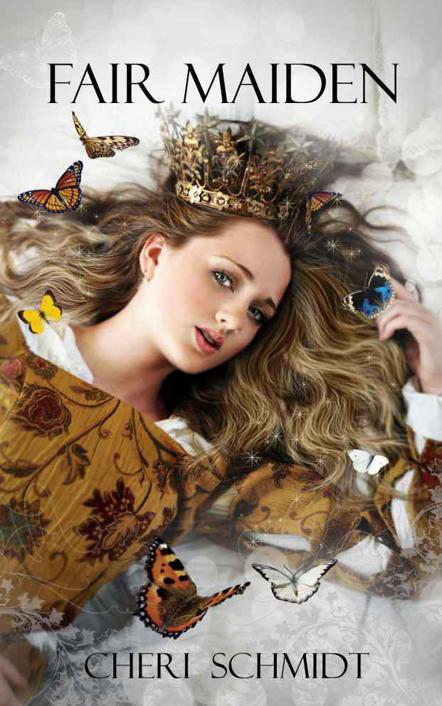 Fair Maiden
eBook Edition
Copyright © 2012 by Cheri Schmidt
Cover Art by Cheri Schmidt
http://www.cherischmidt.net
This
book is a work of fiction. Names, places, characters and incidents are products
of the author’s imagination or are used fictitiously. Any resemblance to actual
events, locales or persons living or dead is entirely coincidental.
All rights reserved. No part of this book may be reproduced or transmitted in any
form or by any means electronic or mechanical, including photocopying,
recording, or by any information storage and retrieval system, without written
permission from the author.
This
book is licensed for your personal enjoyment only. This book may not be re-sold
or given away to other people. If you would like to share this book with
another person, please purchase an additional copy for each person. If you’re
reading this book and did not purchase it, or if it was not purchased for your
use only, then please return to Amazon.com and purchase your own copy. Thank
you for respecting the hard work of this author.
October 2012 - Edition

Drawing a breath, she frowned. It seemed she did not feel
the air entering her lungs.

She rubbed her eyes, opened them and then stretched, arching
upward. Still, she felt nothing. No bunching of muscles, no friction of her
fists upon her eyelids. The frown deepened.

How odd
, she thought.

Looking up at the beautiful, though unfamiliar, canopy bed
she rested in, she sighed for it was exquisite. The posts were carved with
ornate depictions of faeries frolicking. Green vines, green
living
vines
with purple blooms grew up the dark wooden posts. How were they thriving
without soil to grow in? Enchanted perhaps?

Hanging from the beams above the bed was sheer fabric that
had been wrapped and gathered so it billowed to the floor in flowing puddles of
white linen.

But what stunned her the most were the living butterflies
fluttering about the blossoms and the fireflies that twinkled as they danced
around the grand bed. She felt as though she was nestled in a magical forest
setting fit for a faerie princess, except this setting was
inside
.

Where am I?
she wondered.

Putting out her hand, she meant to gather the silken sheets
and pull them aside to get out of the bed. But—she could not touch them. She
looked down, feeling quite perplexed, and her eyes widened when she noticed
there was no lump where her body should be. Horrified now, she scrambled from
the bed to stand at the foot of it, only to realize with another cry that her
feet were not upon the floor, but floating inches from it.

“I-I’m dead?” she whispered, the shock of it snatching her
voice.

Peering down at her transparent self, she exhaled and
managed, “Wait…
Who
am I?” She lifted one hand in front of her face and
looked through it. Questions filled her mind. How did she die? Would she not
recall such a thing? And why had she not moved on? Why had she not seen the
light and gone to the afterlife? Or
is
this Heaven? This chamber was as
lovely as she’d always hoped Heaven would be.

“No, it cannot be,” she said quickly. Would not her
ancestors be here to welcome her? And she’d thought that celestial place was
not a
bedchamber
. She worried for a moment that she could be in Hell
instead, but then shoved that thought aside as well. This chamber was far too
nice for it to be that terrible place. She must be one of those poor souls
trapped between the two, but why, and how?

Sunlight painted the room from the only window in the chamber.
She stepped toward it, but then watched in awe as she glided forward. Her
momentum halted just in front of it and she peered out wondering if the view
would help her recall where she was.

She discovered she was in a grand castle cresting the top of
a hill. A thick forest darkened the land in the distance. Much of the scene
consisted of green grasses lined with hedges that needed a trim, and roses
appearing to have gone wild. Yellow and green ribbons of farmland radiated from
houses sprinkled along the bottom right side of the hill. But even after
studying the landscape, it did not help her recall this place.

Ivy had climbed its way up to this bedchamber within a tall
turret. She could see four more towers from this perspective. Whilst this grand
palace was a lovely stone structure, she still could not recollect ever living
here, or traveling here. And it was too quiet. Far too quiet.

There was
some
noise, just not the right noises.
Birds chirped in the trees and she could hear the skittering and buzzing of
insects. A breeze whistled around the structure, but there was no sound of
human life. No creak of the floors as people moved about the enormous castle,
no gardener tending to the landscaping, no farm animals.

Drawing her attention from the view, she moved back to the
bed. On it was a piece of parchment she had not noticed before. Three words
were written in a scrolling script upon it.

Was this message for her? She hoped it was. Squeezing her
eyes shut, she fought back tears.
Dead
. She opened her eyes and
refocused on the paper. Dead, but loved. Those three words soothed her
trembling soul. A little.

Her gaze slid to the door. She glided to it and reached for
the handle, then withdrew her hand. “Well, I cannot open it that way,” she muttered
as she noticed she could see the knob through her fingers.

She studied the door for a moment. A carved diamond pattern
embellished the surface of the wood. The door was additionally adorned with
long, ornate hinges and a decorative handle.

After staring at the detail for several moments, she
thought,
Perhaps I can do it with my mind
. Concentrating on opening the
door, she gasped when the handle jiggled. She attempted again, again it moved,
but the door would not open. Again, and again, and again she tried, then
exhaled in frustration when she remained unsuccessful.

Once more she pondered it, pouting.  Then, “Oh, how could I
be so foolish?” she groaned aloud, just then realizing that ghosts, such as she
appeared to be, can walk
through
doors.

She gathered her skirts and stretched one toe through the
wood, as if testing the temperature of water. Her foot passed through as though
the solid-looking substance was no more substantial than air. She withdrew her
foot and then stretched it forth again, farther this time. Nothing bad happened
to her person. She felt no pain or resistance whatsoever. After another
moment’s hesitation, she decided to follow with the rest of herself, only
imagining at the last moment getting stuck inside the door. Forever.

When she emerged on the other side, she nearly collapsed
with relief.

Here she found a wide hallway lined with more closed doors.
She floated through each one finding many furnished bedchambers, but none
occupied. However, when she came to the master chamber, she noticed that a man
did live here, or had lived here. The wardrobe, which he had apparently not
shut tightly enough, had swung open letting light from the window illuminate
the contents. To her, the clothing inside appeared to be masculine in nature,
though the tunics and braise were fashioned differently than she was accustomed
to seeing…or what she
thought
she was accustomed to seeing. Strange how
things such as this were almost within her reach, yet the past memories about
herself felt so utterly vague.
No
, she thought,
’tis much more than
that. ’Tis more like missing and lost within a dense fog.

She took a deep calming breath, though she did note the act
of breathing appeared to be more habit than necessary. With one more sigh, she
continued to explore the castle. She found that servants had also lived here as
recently as the man. She then wondered how long she’d been here. How long had
she been sleeping in that bed? And where was everyone?

After covering almost every inch of the deserted dwelling,
she decided to head back toward her bedchamber, or at least she thought it was
hers
.
She froze when she got a good view at the door from the outside. It looked like
a wooden gate to a secret garden in which the plant life was sneaking its way
through the cracks between the frame and door. Ivy and moss, and other blooming
vegetation were fanning their way out from the edges. And it looked quite
different from every other door in the demesne. Even the hinges were unique and
the handle was placed and fashioned differently. It appeared older. Centuries
older.

Lifting her hand, she reached for the handle.  It irritated
her that she could not physically touch it. With determination swelling in her
chest, she dropped her hand, squared her shoulders and focused on the mechanism
with her thoughts. It turned halfway. She tried again. This time as the handle
twisted, she heard a small click and the door cracked open. Smiling now, she
refocused her efforts and watched with joy as the door swung all the way back.
Those ancient-looking hinges groaned in protest.

This room was the one she wanted to investigate more
thoroughly, she pondered, as she glided into the odd spellbound chamber.

Perched above a narrow table on the left wall, which she had
not noticed before, was an oval looking glass. She traveled to it, and gasped.
She could see her reflection!

And she recognized the face, though she did not….

Leaning closer, she studied her phantom self. The golden
dress she wore was quite pretty, and complimented her pallid complexion and
pale pink lips. The square neckline was tightened with laces at the bust. The
intricately embroidered fabric shimmered with her movement, and the blue and
green colors of the embellishment picked up the flecks of color in her green
eyes. Little pink-colored roses in the stitched design added more color. The
skirt had many layers and a train in the back. This dress was formal, a gown.

Her blonde hair hung in natural waves around her shoulders.
It drifted down past her hips. And it
was
drifting, moving actually, as
if a breeze swept her body. Silk ribbons in many colors had been tied in her
hair. She also noticed a lacey white veil.

“I was a bride?” A crease formed between her brows. “Did I
die on the wedding night, or before?” She lifted her left hand, but found no
wedding band there. “Before then. I am not yet wed.”

“…but how did I die?” she asked herself again. Without
attempting to touch the glass, she lifted a hand, palm forward, to the
reflection gazing back at her.

“Was I murdered?” Her hand began to shake as emotion gripped
her, and a glistening tear trickled down her cheek. “Did the groom do it? Was
it violent? Painful? Is that why I do not remember, because it was so horrific
that I forced myself to forget?”

Shuddering, she felt as though someone was watching her. She
spun away from the mirror to see if another person had entered the chamber, but
saw no one. It did trouble her that she’d left the door wide open. After
focusing on closing it, she startled herself when she managed to slam it shut.

A Perfect Hero by Caroline Anderson
Helios Beginnings (The Helios Chronicles #0.5) by Tawa M. Witko
Prince of the Blood by Raymond Feist
Oak, Sophie - Away From Me (Siren Publishing Classic) by Sophie Oak
September Again (September Stories) by Jones, Hunter S., Poet, An Anonymous English
Robin McKinley by Chalice
Everything I Know About Love I Learned From Romance Novels by Sarah Wendell
Senseless by Mary Burton
Fifty Shades of Jungle Fever by L. V. Lewis
The Numbers Behind NUMB3RS by Keith Devlin