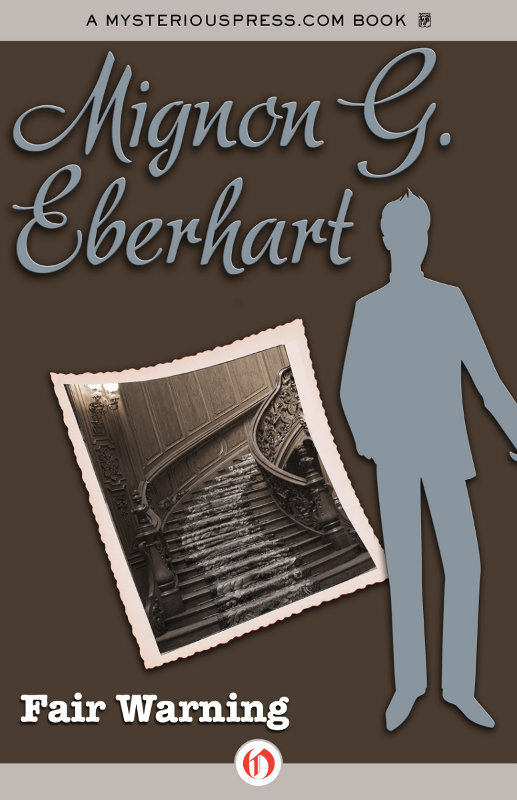 Marcia got up and went to the window. It was a cold, wet morning in April. The sheathed, green points of tulips looked bare and thin; the brown flagstones leading down to the garden were shining with moisture, the vines were wet and yet brown over the summerhouse down by the pool. Beyond the garden wall she could see a red brick corner of the Copley house.

She was aware of the doctor’s waiting for her reply, but she stood rigidly still, her hands clenched in the pockets of her yellow sweater so the doctor could not see them, her chin thrown up a little to ease the sudden contraction of muscles along her throat. She said finally, “When?”

She could hear Dr. Blakie rising, too, and walking restlessly about the room. He said “Today” shortly and prowled toward the end of the long library and stood there, looking into the cloudy green depths of the small aquarium which held Ivan’s pet goldfish.

“She already knows. I told her while I was waiting to see you.” Dr. Blakie was nervous. He left the goldfish and wandered toward the opposite end of the room, pausing before Ivan’s long mahogany desk, picking up small objects on it and putting them down again, turning to the globe on a standard beside the desk and spinning it absently.

The small sound of the spinning was the only sound in the Godden house. Ivan’s house, which, though it had remained almost entirely unchanged since Ivan had been the owner of it, still bore his imprint so indelibly and so inescapably that during those weeks of his illness it had seemed like an ambassador, an emissary, silently and secretly watching and storing up the records of that passive espionage.

The library was particularly Ivan’s room, for everything in it reminded her of Ivan; even the ranks of glass covers along the bookshelves, which reflected rather eerily every light and motion in the somber room, now and then seemed actually, in the most curious way, though Ivan was not there at all, to reflect the faintest glimpse of his handsome, pale face and the secret, shadowy indentations at the corners of his mouth. It was no real inflection, of course; it was as if the blank glass cases held and retained the distorted half-reflections they had gathered and could, incomprehensibly, afford flashing reglimpses of faces and things. But it was in the main a shadowy room, brown-walled and high-ceilinged, with heavy brown carpets and high, narrow windows, too much curtained in lace and brown velvet. A white bust of Caesar—was it?—looked blankly down from one corner upon the things below it. The leather-cushioned chairs held, that dark morning, small dismal highlights, as did the shining, massive mahogany desk and tables. It was Ivan’s desk, and he liked to sit there caressing a favorite green glass paperweight with his beautiful white fingers.

Marcia was looking fixedly at the row of budding lilacs beyond the french doors—one of the more recent additions to the Godden house and leading down to the garden. There were small brown buds, chilly-looking, and she examined them with the most intense scrutiny, deciding whether or not the late frost had touched them. If she turned toward the room which pressed so strongly upon her she would see Ivan sitting at that desk.

His pale, handsome face—only a little too long and too narrow, with too cruelly pointed a chin. His black, wavy hair, so becomingly touched with white at his narrow temples. His thick eyebrows making a black slash across his white face, and above, but not shadowing the light, queer eyes which, looking at Ivan Godden, you were first and strongly aware of, for they were a very blank light aquamarine with tiny, hard black pupils like pencil points. Their expression seldom varied, and Marcia never understood just how she knew so certainly and so instantly when he became angry.

He would be sitting there behind the desk, his well-manicured fingernails faintly rosy against the whiteness of his fingertips and the glass paperweight. The paperweight was heavy and globular and contained strangely mingled sea-green flowers which were almost the color of his eyes and in the most extraordinary way shared their look of light, inscrutable blankness. It was his habit to look into the mingled green shadows of the paperweight and speak to her: “Marcia, I’m sorry to be obliged to tell you …” “Marcia, much as I dislike to remind you of my generosity …” “Marcia, will you kindly remember …” “Marcia, come to me …”

It became too real. Her heart was pounding in a curious, suffocating way which had asserted itself during the past year and was extremely distressing. To calm it she said to the doctor, still not looking at him:

“Everyone is talking of what you did for him. They say you made him live; that no other doctor would have done the things you did. I want— You must know how very grateful—” She couldn’t finish.

Dr. Blakie measured the distance from Madagascar to London, spreading his fine, deft surgeon’s fingers along the rounded surface of the globe.

Marcia thought of the night at the hospital following the auto accident in which Ivan had been injured. Of the nurses and the doctors in consultation. The smell of ether. Dr. Blakie in a queer white coat, loose, with a mask on his face.

“They said that night that what you were doing to save him would become surgical history,” she said. “Don’t think we don’t know how you worked—how you saved him by sheer genius and will power when everyone else gave up and said it couldn’t be done.”

“Oh, come, come, my dear.” He spun the globe impatiently, checked it, and measured now from Cape Town. “If a doctor can’t work a little harder for his friends …”

She turned finally to look at him. He was a slight, gray man, in his middle forties perhaps, young for his achievements. His hair was thinning a little over his high forehead, his mouth was controlled and rather tight, there was a delicate network of wrinkles around gray eyes, hidden on occasion by gold-rimmed spectacles. His color was clear and good, his hands incredibly deft, and every muscle and nerve in his body had the most perfect and exact co-ordination, as if—as was true—he hated any kind of waste. He was a fine surgeon, he was kind in a rather remote and detached way, as if a nearer approach might involve him or his well-arranged emotions, and he had a fine brusque impatience for things that were unimportant. Human life was important, it was at the very top of his scale, and for Ivan he had flung off every shred of that neat, quiet detachment and plunged fully— white and sweating and tense—into combat. He had made Ivan live.

“A little harder,” said Marcia gently. “Do you think we don’t know what you did for him? The surgery itself—the care you gave him afterward. They said you didn’t leave the hospital for two days.”

“Well, I did,” he said. “Went to my office both days. The nurses made too much of it. Although as an operation it was—well,” he admitted, “it wasn’t bad. Old Dr. Leonard was watching. He said I couldn’t do it. Swore. Well, I did. And after the first few days Ivan made a rapid recovery. He’s pretty tough—you know. Takes care of himself, too. You won’t have any trouble about that. He’s been coddled quite a lot in the hospital, and he’s not going to take any chances. Just see he doesn’t walk much on that foot. But he won’t.”

He spun the globe again. The little whirring sound diminished, and Marcia said:

“He is—altogether well, then, except for the foot?”

He looked at her quickly and replied indirectly, “You’ve been at the hospital every day, Marcia.”

“I know. But he never walked. Never felt awfully well.” Her heart was starting that suffocating pounding again. She said quickly, “Is there anything in the way of—oh, diet? General care?” A sudden thought occurred to her, and she leaped at it. “Perhaps the nurse is coming along?”

The doctor glanced at her again and then bent over the globe.

“No. He didn’t want a nurse. Doesn’t need one now. Anyway, he was a little difficult about nurses after the first few days.”

“Oh. That’s why they changed so often?”

He nodded. Then said dryly. “He wasn’t easy to take care of, I must say. I may have had more cantankerous patients, but I can’t remember any.”

“That doesn’t mean Ivan isn’t grateful to you. It’s just his way.”

“Damned unpleasant way,” said Dr. Blakie. “However, it’s all in a day’s work.”

“You won’t admit,” said Marcia, smiling rather stiffly, “that you did anything out of the ordinary for Ivan.”

He gave the globe a final twirl and turned abruptly away from it and toward her, so that the gray, clear light from the window fell directly on his face.

“Suppose I did,” he said abruptly. “He’s your husband, my dear.”

Her husband. And he was returning that day. In an hour. Two.

The four weeks of peace and of strange, cautious tranquillity had passed. A little time more, she thought dimly, and she might have found herself again. But Ivan was returning, and at that thought there was again that distressing quiver and flutter running along her pulses.

Dr. Blakie knew it this time, and took a quick, neat step toward her, put one hand on her wrist and turned her so the light fell now on her own face and he could see her eyes. He said quite suddenly:

“What are you afraid of?”

She met his eyes helplessly. They saw too much. He was too wise about people, about his patients, about the things they didn’t tell him.

“You mustn’t be afraid,” he said quietly. “Don’t tremble. What is it?”

And as she still did not—could not—reply for fear of breaking forever the protecting barrier of silence she had so painstakingly and painfully built up, he said rather gently, “Is it Ivan?”

He did not seem to expect a reply to that. He let his cool gray eyes search her own for a moment, then suddenly took his hand from her fluttering wrist and with the quiet neatness and economy of motion that characterized him took out a cigarette and lighted it. She watched him select the cigarette and open the small cardboard flap and pull off and strike the match with a very passion of fixity, as if the small routine of it held an engrossing interest. But no matter how many small objective things one fastened one’s attention upon, there were still those other things, things one couldn’t escape.

He puffed blue smoke and turned a little to look upon the new greens of the lawn, uncannily bright in the rest of the overhanging grayness of the world; a robin dug briefly and tersely for a worm, secured it and winged importantly away.

Threads of Change by Jodi Barrows
Emergency Room by Caroline B. Cooney
Not Looking for Love: Episode 7 (A New Adult Contemporary Romance Novel) by Lena Bourne
Covet Not by Arden Aoide
Death of an Alchemist by Mary Lawrence
Raging Kane: Book Three in the Wolfe Creek Series by Steele, C.M.
Madre Noche by Kurt Vonnegut
The Snow Empress: A Thriller by Laura Joh Rowland
Cowboys Like Us by Thompson, Vicki Lewis
The Jupiter Pirates by Jason Fry