Fairies and Felicitations (Scholars and Sorcery) 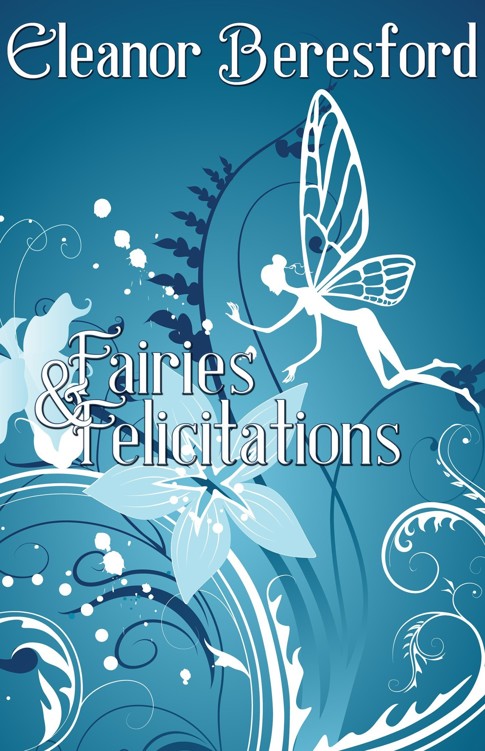 one - Games of All Kinds

two - A Sea of Misfortunes

A Scholars and Sorcery Novelette

For my beloved wife, Isobel,

and my precious son, Caius.

All rights reserved. This book or any portion thereof may not be reproduced in any manner whatsoever without the express written permission of the author except for the use of brief quotations in a book review or otherwise as allowed by law.

Permission to use the setting and characters in not-for-profit transformative fan works is granted.

I’VE ALWAYS THOUGHT of myself as middling. Middling looks, middling position in the form, middling magical Gift, a solid but not spectacular athlete, domestic background of the cook and two maids type, and just a middling kind of curve to the tip of my ears.

However, at some point in my forgotten past, I must have done something of more than middling wickedness to deserve a friend like Lady Emmeline Eversleigh, commonly known as Kitty.

Kitty is not middling anything. Kitty is, I suspect, an imp changeling in human form.

By some miracle, she’s standing completely free of any defence when I’m looking to pass. Of course, it might not be a miracle so much as that the girls from West House don’t see the point of defending against Kitty in an inter-House practice match. This realisation belatedly visits itself upon me when Kitty gazes at the hockey ball with a kind of dreamy interest, utterly failing to try to connect her stick with it in any way. Patty hares up and away with it without any need to tackle for possession, and I catch reproachful looks from all around, as if it was
my
fault.

Kitty is actually shameless enough to raise her delicate eyebrows in astonishment when Cecily, the Games Captain, calls her over for a chewing out after practice.

“You unmitigated little donkey! What do you think you’re on the field for, decoration?” Cecily’s accent always becomes more pronouncedly Colonial when she’s in a temper.

“You have to admit I do improve the general appearance of the team,” Kitty says modestly. Even though I hate to admit it, she’s right. The dark green gym slip brings out the green in her own eyes, and looks awfully nice against those fluffy ginger curls.

“You vain little peacock! If you don’t have any character and grit to back up those precious looks of yours, you’ll find they get you nowhere. Buck up your game, kid, or I’ll find better uses for your talents.”

Personally, I think Kitty got off pretty easily. We take games seriously at Fernleigh Manor, even practice matches, and it’s a shame to let School House down. Kitty seems to feel differently. She has her face set in a petulant frown as she watches Cecily stroll off in the direction of her own particular friends. If her appearance wasn’t so soft and elfish, you’d think she looked ferocious. As it is, she looks like an annoyed tiger cub.

“Kid!” Kitty grinds the toe of her shoe in the mud. “She’s only a form above us! What right does she have to boss us around? I don’t know what a Fifth former is doing as Games Captain in any case.”

“You know the Sixth is a washout when it comes to games this year.” I punch her consolingly on the arm.

“If it absolutely had to be a Fifth former, couldn’t it be Corona? You have to admit Corona’s a sport, Anne.”

“By which you mean she lets you get away with murder. Cecily’s all right,” I add, in the off hand tone that is necessary when a member of the Upper Fourth expresses admiration for an older girl. “Not a bad Captain at all.”

Kitty ignores me, still glaring after Cecily. “Looks get you nowhere! That’s rich, seeing she spends her time draped over the arm of the best looking girl in the form.”

I follow her gaze. Cecily is smiling at Esther Carmody. I cannot in justice argue with Kitty’s opinion of Esther. She is, in all truth, absolutely lovely. That bronze-brown hair, the faint gold to her skin, those long dark eyes… I turn quickly away as the girls start to head in toward the school. I’m not a first former, to hero worship a girl in the Fifth.

“I’m sure it’s not because of Esther’s looks that they’re such great friends,” I say, a bit belatedly. I look away, to cover my distraction.

“It’s not as if they actually have anything in common. Cecily is the worst of the goody-goodies, and Esther spent half of last year in detention.”

“Esther’s quite keen on games. She’s simply marvellous at cricket.”

Kitty, again, ignores me. Sometimes I wonder why I consider her my friend at all. “Beastly hypocrite.” Before I realise that it’s not me the insult is flung at, and certainly before I can stop her, her hand flutters briefly in Cecily’s direction.

“Kitty!” I hiss, as Cecily slips on a patch of ice that I was certain had not been there a second ago, falling ungracefully on her rather broad posterior.

Cecily’s other great friend, Charley, rushes forward to help her to her feet with her usual gallantry, soothing and petting. Neither look our way. Esther, however, brushing splattered mud off her own stockings, glances over her shoulder in a rather sharp way that I don’t quite like. When Cecily is on her feet again, Esther rises on her tiptoes—she’s quite petite, although not as little and kittenish as my friend—and whispers something in Cecily’s ear.

I can see the grim set of Cecily’s usually good-natured mouth from all the way over here. She’s soaked with icy mud from head to toe.

“Shall we head over to the rose courtyard?” I ask, hurriedly.

Kitty looks at me as if I’ve proposed flying to the moon. “At this time of year? Are you quite mad, or do you want to go brownie hunting in the dead sticks? We haven’t even washed and changed.”

“I really think we should leave,” I say, but it’s too late.

Kitty detests being called Emmeline. She pointedly looks across the fields rather than at Cecily.

“A little bird tells me you’re pining for the freezing highlands of Scotland. I figure a lap or two of the hockey fields before you go in to your bath might get a longing for chilblains out of your system.” Cecily wheels around and links arms with her friends.

Kitty lifts big, round, pleading eyes to me. “I say, Anne…”

“No fear. Not on your sweet life. Enjoy your run,” I say firmly, and head back into the warm school.

Kitty seems to have come out of her sulks by bedtime, thank heavens. She’s sitting on bed, already in her pyjamas, her hands clasped angelically on her lap, when I come into the dorm after free time. When I ask her how the laps went, she just smiles at me in her feline way.

“Oh, fine, lass,” she says, going all Scottish on me. “I really don’t mind the cold, you know, and it’s not simply my Gift. Perhaps Cecily is right about freezing highlands.”

I shrug, feeling a tad suspicious again. Kitty’s people, or rather her father and herself, genuinely are the owners of a castle in the freezing Highlands, but they can’t afford the coal to keep it open except for the shooting. I’ve never seen it myself, despite an invitation, because stomping around in the mud watching people with pointy ears killing golden geese isn’t really my idea of fun. Most of the year, Kitty’s father lives in a cosy flat in Edinburgh where, if Kitty is to be believed, he has perfected avoiding his bills and forgetting to pay his rent. If he’s anything like his daughter, it’s probably true. Kitty spends most of her holidays in Cornwall with me.

In my bitter moments, I wonder if the convenience of that is the true reason for our friendship. It’s close to school, and the bathing is good.

“It’s awfully sporting of you to take that tack,” I say, eyeing her warily.

“Oh, why not be sporting? After all, poor dear Cecily has to have her meagre pleasures. It’s not like tennis, which is at least socially useful. There are definite advantages to looking graceful in a white dress, I’m the last person to deny it. All Cecily has is hockey, and she might as well throw her weight around as Games Captain while she has the chance. No one plays hockey after school but desperately hearty overgrown schoolgirl types.”

“My sister plays for England,” I say, coldly.

“There, you see?” She glimmers up at me.

“Do you know what I think?” I say, my temper flaring a little. “I think you’re just sick because you’re used to being the darling little pet of the upper formers, and now we’ve gone up in the school a bit and we’re nearly as old as the top formers, your charms don’t work any more. Your time has come, old girl, and you can’t just bat those long lashes of yours at them and get your own way all the time. That’s why you’ve got your knife into Cecily. She sees right through you.”

“I bet I could charm Cecily Kettler if I wanted,” Kitty says, her big green-gold eyes narrowing.

“Don’t even think about it,” I warn her, and she subsides. I’m the only person at Fernleigh Manor who knows for sure that, as well as her ice magic, Kitty has the power to cast Charms and Glamours to influence people to think well of her. It’s her trump card when she gets into scrapes, and being Kitty, she can’t afford to reveal it.

“Oh, I have other things to think about.” Kitty parts her hands, and I see a glint of green light through her fingers.

“Do you have a fairy in there? Oh, Kitty, don’t tell me you swiped it from the aviary in the Science classroom. Miss Christie will go wild.” I try to peer between her fingers.

“No, it’s just a wild one that fluttered onto my shoulder while I was doing my laps. It’s a pretty little thing, isn’t it? Look at its big emerald eyes and those lovely dragonfly wings. Although that’s all there is to it, prettiness.” Kitty stands and opens the window, letting in a blast of cold air that makes the other girls shriek, and releases the little creature. “Nothing of substance.”

“Are you still on about that?” I am a touch concerned. It’s not like Kitty to brood over something rather than bouncing up again like a rubber ball. “Give it a rest, Kitty-cat.”

“Yet we love fairies anyway, because they are so pretty,” Kitty goes on, regardless. She plumps down on my bed and twinkles up at me. “You admire Esther for her beauty too, rather than her cricket, don’t you, Anne?”