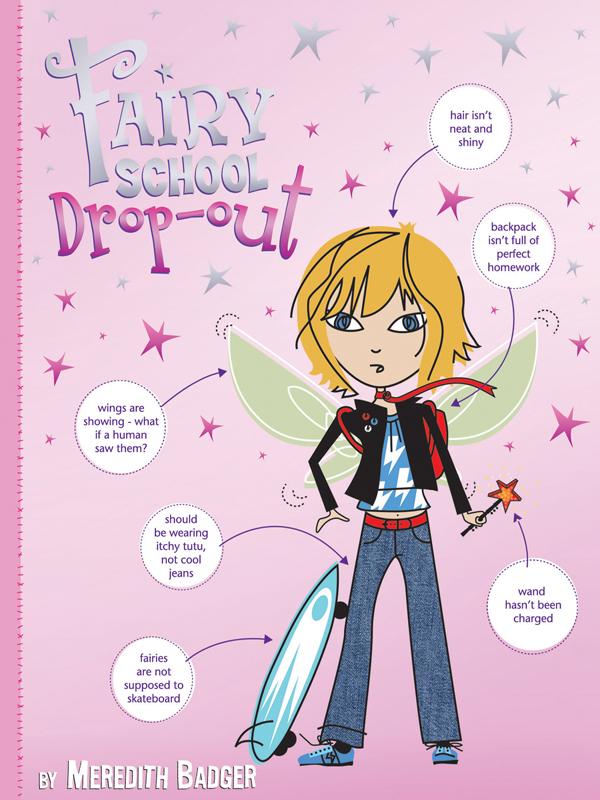 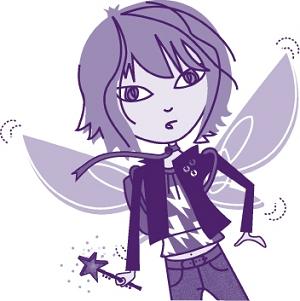 The pages of this book are printed on paper approved
by the Forest Stewardship Council (FSC), which promotes
responsible management of the world's forests.

I
f you happened to look through the kitchen window of 27 Raspberry Drive at 7:50 last Friday morning, you would have seen something so totally normal you wouldn't have thought twice about it. Mrs Knottleweed-Eversprightly was rushing around, trying to find her toolbox before she flew off to work. Mr Knottleweed-Eversprightly was there too, making sandwiches at the kitchen bench. Kara, the baby, was in her high chair, drooling as usual. And Kara's big sister Elly was eating her muesli and reading a comic book before she headed off for school. It was, in fact, all very dull. You might have even yawned a bit before you went on your way because the scene in the kitchen was so boring. Maybe you would've told yourself that you should really stop staring in other people's windows, because you never saw anything interesting anyway.

But if you had been a bit more patient and had stayed looking in the window a little longer, you would've seen something very strange start to happen. Not the sort of thing that happens in the average household at breakfast time at all. At 7:55, Elly's muesli bowl began to quiver. Two minutes later it started rocking from side to side. At exactly 8 o'clock, the muesli bowl hopped across the table seven times, splashing milk around as it did. Elly tried to pin it down with her spoon but the bowl kept sliding out of the way. Then at 8:01, the bowl floated up into the air.

âStop that!' Elly said crossly, trying to grab it. âCome back here immediately.'

But the muesli bowl continued floating higher and higher until it was positioned directly above her head. Elly had a feeling she knew what was coming next but there was nothing she could do except squeeze her eyes shut. Sure enough, the bowl tipped upside down and Elly found herself covered in sultanas and oats, with a river of cold milk flowing down the back of her neck.

Kara laughed and banged her spoon on her highchair. Elly removed a bran flake from her ear and glared at her baby sister.

âYou did that on purpose,' she said. âEveryone else might think you're cute and innocent but I know better. You're too smart for your own good.'

Kara did what any baby would do. She drooled some more. But this wasn't ordinary drool. Kara's drool sparkled like it was filled with tiny crystals.

Mrs Knottleweed-Eversprightly rushed into the room.

âElly, have you seen my ...' she started, but stopped short when she saw her breakfastcovered daughter.

âWhat are you doing?' she asked crossly. âThere's no time for messing around. You have to leave for school in a minute.'

Elly knew what her mum was thinking. âBut it's true!' she protested. âWhy won't anyone ever believe me that Kara knows magic? We're fairies after all, aren't we? We're supposed to do stuff like that.' It made Elly grumpy that no-one ever believed her. To make matters worse she could feel a cold, mushy bran flake sliding down her back.

âWell, it wasn't me,' grumbled Elly, but there was no point arguing. The most annoying part was that Elly knew there was no way she could've made the bowl rise like that, even though she was much older than Kara and was already going to one of the best fairy academies in Fairydom. In fact, Elly had already been to
three
of the best fairy academies in Fairydom â but unfortunately, she'd also been expelled from two of them. Both times it had been because of things she'd done accidentally, although no-one believed her. That was the problem with coming from a famous fairy family â everyone assumed that you knew exactly what you were doing when it came to magic.

Elly was prepared to admit that the first time she was thrown out of school was because of something silly she did. The drinking fountain in the toilets at Dandelion Grove School was broken so Elly had jammed her wand onto the button to make it work. It did the trick, but probably a little too well. Water spouted up into the air so strongly that it broke through the roof and surged through to the classroom above. Elly still thought it was unfair that she got blamed because a teacher happened to be standing exactly underneath the water as it burst through. Miss Pinkleberry had been lifted by the water up through the ceiling of the classroom. A wet fairy finds it difficult to fly so poor Miss Pinkleberry was forced to bounce up and down on the jet until someone rescued her. 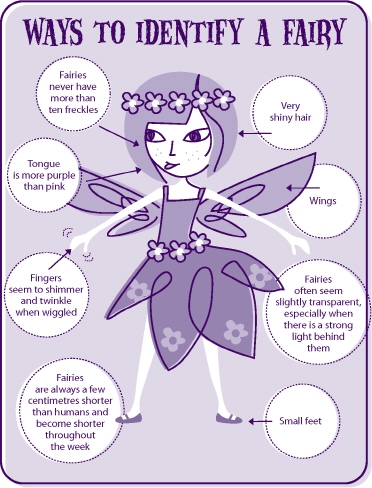 At Crystal Dell School the problem had been because Elly caught a flyrus. A flyrus is like a virus, except it affects wings and makes anyone who catches it fly backwards. Unfortunately, they are highly contagious and before long the whole school, including the teachers, were all flying backwards and bumping into each other. Elly was sent home to recover but when she was well again the Head-Fairy suggested it might be best if Elly found another school. Elly thought this was mean. She hadn't
meant
to catch the flyrus after all.

Now she was at her third school â The Mossy Blossom Academy for Young Fairies. It had taken lots of effort by her parents to convince the school to take her. Madame Silverwings, the Head-Fairy, had already been warned about Elly.

âThis is your last chance,' her mother warned Elly on her first day. âNo other school will accept you if you're thrown out again and then you'll never get your Fairy Licence.' Elly promised to try hard. And she
was
trying. It was just that things didn't always go the way she planned.

âGet changed, Elly,' said her mum as Elly trudged upstairs. âAnd don't forget your wand!' she called after her.

Uh-oh
... Elly scrambled around in a pile of clothes until she found her wand. There was a great big dint in the handle. Elly gave it a shake and turned it on. The wand played its usual startup tune but it sounded a little wonky. The star at the top was dim, too. Elly shook it again and the wand made a sound like a kitten whose tail had been stepped on. Great. The last thing Elly needed was a wand breakdown on top of everything else.

Elly quickly tried to brush the muesli out of her hair and pulled on a clean school uniform. In the first year at Mossy Blossom, you had to wear a knee-length, baby-blue tutu. There was also a wreath of flowers for your head and soft blue slippers with big blue bows for your feet. Elly hated the uniform. She hated the itchy tutu and she hated the scratchy wreath. But most of all she hated the stupid shoes with those dumb, floppy bows. Elly's slippers were now splattered with milk. She took them off and pulled on her favourite red boots instead. Much better!

Elly grabbed her skateboard and shoved it in her bag before dashing downstairs. Her mum caught her for a quick hug and a wet kiss as she rushed out the door.

âAnd fly with the Fairy Flock this morning, OK?' called Mrs Knottleweed-Eversprightly as Elly dashed off. âIt'd be nice to have one week where your Head-Fairy didn't call me up about some rule you've broken!'

âSee you later!' called Elly over her shoulder. Maybe she could pretend she hadn't heard that last bit ...

N
ow, maybe you're reading this and thinking that Elly and her family don't sound like real fairies. Perhaps you think you're an expert because you've read all the fairy books and seen all the fairy movies. Well, forget all that stuff, because it's probably wrong. Most humans wouldn't recognise a fairy, even if there were one living right next door to them. And there might well be. For some reason, most humans think that fairies live in toadstools. Let's get one thing straight right from the start.
They don't
. They live in houses, just like humans. Don't believe it? Have a look at the size difference between a fairy and a toadstool: 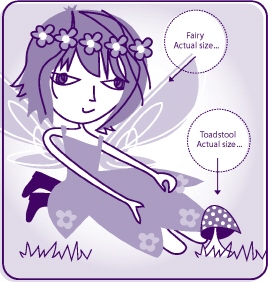 Home Boys by Beckett, Bernard
The Perfect Ghost by Linda Barnes
The Dark Roads by Lemmons, Wayne
The Ex Trials (Falling for Autumn #3) by Heather Topham Wood
Moominland Midwinter by Tove Jansson
Cara's Twelve by Chantel Seabrook
A Job From Hell by Jayde Scott
The Darkness of God: Book Three of the Shadow Warrior Trilogy by Chris Bunch
Where The Sidewalk Ends by Silverstein, Shel
You Are a Writer by Jeff Goins, Sarah Mae