Flying is one of those things that sounds much easier than it really is. Most humans at some stage or another think they can do it. Generally they are wrong. It's just as well, too, because most of them would hate it. Flying is very tiring, particularly when it's windy. Ever wondered why birds go to bed so early? It's because they're exhausted from flying around all day.

But Jess was excited anyway. Besides, flying wouldn't be tiring for her because all she had to do was hold on tight to the SpaceCase. Or at least that was what she thought.

She didn't realise how slippery the Space-Case was. Taking-off was particularly tricky and Jess almost slid right off the back as they launched into the air. Luckily, she managed to grab onto one of the handles at the last minute and scramble back on.

âSee if you can keep up!' called Elly, zooming on ahead.

After a couple of minutes Jess looked like she had started to get the hang of flying. She had flown in a plane before, but this was much more fun. The Space-Case zipped along, dodging trees and power-lines and catching gusts of wind that pushed it along even more quickly. It swooped down to where a cat was snoozing on a roof, whooshing by so fast that the cat's fur parted down its back.

âHi, cat!' called Jess. The cat watched them zoom off with a very astonished expression.

Way down below, they could see people scurrying around. As Jess had predicted, everyone was too busy going home to pay any attention to what was going on above. 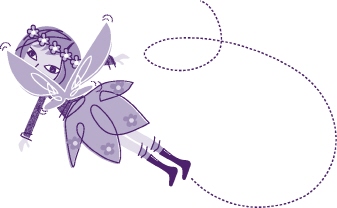 âFly closer to the street,' she whispered to the Space-Case, and the case promptly descended until Jess was almost close enough to tap people on their heads with her toes. She grinned cheekily.

The Space-Case seemed to be enjoying itself too, getting dangerously close to someone's head then dashing around a corner if they started turning around. Jess was enjoying herself so much that she almost didn't notice that they were heading straight for a small boy holding a big red balloon.

âCareful!' called Jess in alarm, and the Space-Case tried to dodge but it was too late.

Jess's foot snagged on the string and as they darted away, she tugged the balloon right out of the boy's hand.

His mother looked around. âWhat girl?' she said.

âThat girl in the sky,' said the boy, pointing.

At 5:25, Elly and Jess landed in the playground of South Street School. They quickly unpacked the volcano, and the Space-Case rapidly blended into a nearby bush. Then Jess led the way to her classroom. Through the window they saw Jess's teacher, Mr Crankle. They had arrived just in time â he was packing up.

Jess picked up the volcano. âWait here,' she whispered, hurrying in, âand wish me luck!'

Elly decided to explore Jess's school. She remembered telling Madame Silverwings that she would like to go to a human school. Did she really mean it? What would it be like? It certainly looked very different to a fairy academy. Lining the walls were lots of kids' paintings â pictures of their pets, their families and their holidays. Elly thought they were beautiful. Fairy school-kids are hardly ever allowed to paint because it's so messy. There are fairy smocks, of course, to protect their clothes, but fairies aren't supposed to get their smocks dirty either. Elly peered through a door marked âGym' and saw a room full of colourful mats and sports equipment. Elly sighed. The only gyms that you found at a fairy school were wing-gyms, which were filled with boring machines to help you strengthen your wings for flying.

Back in the corridor, Elly saw something that made her gasp. It was a sign, and on it was written:

No flying down the corridor! Walk slowly.

Elly wished there were signs like this in her school.
Jess is so lucky to go to a school like
this,
she thought enviously.

A few moments later, Jess came bursting out of the classroom. She was very red in the face.

Jess shook her head. âHe didn't just
like
it. He
loved
it! He said it was the most original thing he'd seen all day. He wants to enter it in the science fair.'

âSo why do you look like you're about to cry?' said Elly, puzzled.

âBecause I'm excited. And happy,' Jess said, laughing. âAnd it's all because you granted my wish.'

Elly looked at her in surprise. âI didn't grant your wish,' she said.

âYes, you did,' Jess insisted. âBefore you came over I was wishing that something would happen so my assignment would be finished,' she said. âAnd now it is. You're an excellent fairy.'

Elly didn't know what to say. Had she actually managed to grant someone's wish? And if so, how come it felt so much better than she'd ever imagined it would?

E
lly woke up the next morning right in the middle of a dilemma. Elly had always thought that a dilemma sounded like a rather nice, snuggly thing to be in â a bit like a warm bed on a cold night. But now that she was actually in one, she realised it wasn't quite so nice after all.

Only a couple of days ago, everything had been so clear. She wanted to leave Mossy Blossom Academy, and stop being a fairy forever. But helping Jess yesterday had made her feel differently about everything. Elly had granted her first ever wish and been told that she was an excellent fairy. It was very weird to have someone say that to her. Elly was much more used to being told exactly the opposite.

And it had made her think.

First she thought:
Perhaps helping humans
wouldn't be so bad, if they were like Jess?

And then she thought:
Maybe granting
wishes would be fun if I could grant them in my
own way?

But although these were good thoughts, Elly knew it wasn't as simple as that. If she wanted to become a fairy, she had to graduate from a fairy academy and get her wish-fulfillment licence. But right now she wasn't sure she could last another day at fairy school, let alone three more years.

Elly was in the dilemma all through breakfast, and she was still in it when she joined the Fairy Flock. She was so deep in her dilemma that it took her a moment to notice she was flying next to Gabi Cruddleperry.

âReady for the test today?' smirked Gabi. âI can't wait to see what your dumb old wand will do this time.'

Elly looked down at her wand, which was making a happy, purring sound. Jess had made her feel guilty for not treating it very well so Elly had given it a thorough clean and had straightened out some of its kinks. It was even fully charged for once.

âMy wand is exactly the same as yours, Gabi,' Elly said crossly. First year students had to use a standard, school-approved wand. It came with none of the fancy attachments that newer, more expensive wands did but it was considered important to learn magic on simple wands first.

Elly gasped. The Twinkleizer 480! This was such a famous brand that even she recognised it. Only licensed fairies were supposed to use them. Elly could guess how Gabi got hers. Her parents owned Wand World â the biggest wand shop in Fairydom â and Gabi was very spoilt.

It was an impressive-looking wand with a slick, silver handle and a star that flashed different colours as it moved. Instead of the school wand's seven basic buttons the Twinkle-izer 480 had thirty. There was a small keyboard that folded out so you could type in more complicated instructions. It even played music. 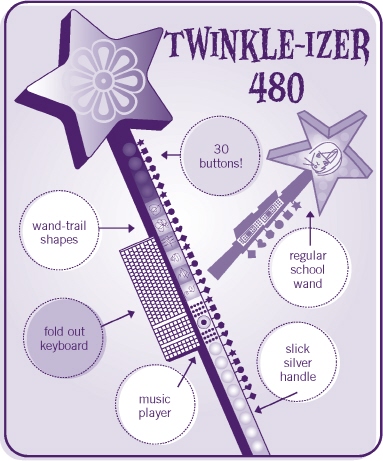 âDo you know how to use it?' Elly asked. The only downside of the Twinkle-izer 480 was that it was very complicated.

âOf course!' bragged Gabi. âIt's not that hard if you're an experienced fairy. Wait till you see the star-trails it makes.' She showed Elly a display window on the handle with lots of different wand-trail shapes preprogrammed into it.

âI just click the shape I want and the wand makes a trail,' explained Gabi, scrolling through hundreds of tiny pictures. Some of the shapes seemed very strange to Elly, like footballs and bananas. Who would want lots of tiny bananas trailing along behind their wand?

Elly tightened her grip on her own wand. She hadn't practised making trails since Jess had done the repairs. Would it still be working when it was time for Mrs Clovercloud's class? If it wasn't, she would probably be thrown out of school. But was this a good thing or a bad thing? Elly realised she was right back in the middle of her dilemma again. 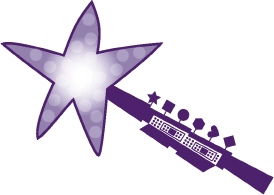 Saphie was already in class when Elly arrived at Mossy Blossom. âAre you ready for the test?' she whispered. âThis star-trail thing is much more difficult than I thought.'

But Elly didn't get a chance to answer, because just then Mrs Clovercloud flew in.

Primrose stood up, looking nervous. Her plaits twitched slightly as she swished her wand through the air. A trail of stars appeared in its wake, but they weren't silver. They were green. And instead of fading away gently they made a loud popping sound and smelled strongly of soap.

âPrimrose, I think you may have put dish- washing liquid in your wand by mistake. You'll need to work on that for next week.'

Gabi was next. Elly nudged Saphie. âCheck out her wand,' she whispered, and Saphie's eyes widened when she saw it. Elly leant forward. She was curious to see how well the new wand performed.

Gabi held the wand up high so that everyone could see that it was a Twinkle-izer 480. Then she swished it with a flourish.

Everyone waited for stars to appear. But they didn't. Instead, a herd of tiny piglets emerged, running around in circles above Gabi's head, oinking madly. The pigs didn't fade away, either. If anything, they grew bigger and brighter.

Gabi started swishing the pigs away from her face, looking puzzled and annoyed. âI'm sorry, Mrs Clovercloud,' she said, flustered. âI must've pressed the wrong button. Let me try again.' She pressed another button and a trail of tiny puppies tumbled into the air, yapping and waggling their tails. When the piglets saw the puppies they started squealing in fright.

âThose wands are banned at school, Gabi,' said Mrs Clovercloud disapprovingly. âWhere is your school-issued one?'

âJust give me one more chance,' begged Gabi, pressing again. The next trail was made of tiny scissors that quickly joined the chase, snapping open and shut like they were trying to cut the tails off the piglets and the puppies. The classroom had become very noisy. Elly and Saphie looked at each other and tried not to laugh.

The End of Country by Seamus McGraw
Fathom by Merrie Destefano
Capture Me by Anna Zaires, Dima Zales
Cat and Mouse by Genella DeGrey
Person or Persons Unknown by Bruce Alexander
The Fortunes by Peter Ho Davies
Clementine Rose and the Movie Magic 9 by Jacqueline Harvey
Giving You Forever by Wilcox, Ashley
The Hangman by Louise Penny
Gifted To The Bear: A Paranormal Shapeshifter Romance (The Gifted Series Book 1) by Amira Rain