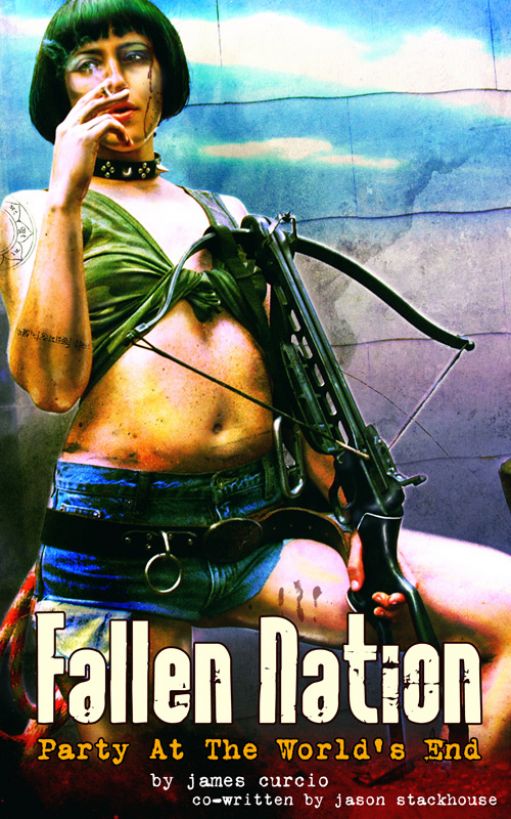 Party At The World's
End

Based on FALLEN NATION:
BABYLON BURNING,

a screenplay by James Curcio
and Jason Stackhouse

Special thanks to Anna Young
Kelland

and the rest of the initial
Fas Ferox team,

To friends, family, and
lovers for putting up with me

in the process, and my wife
Jazmin.

“
Fallen! Babylon the Great has fallen!

She has become a home for
demons.

She is a prison for every
evil spirit,

She explained the events of
the day to her replacement, handing her a clipboard in the
process.

It had been an uneventful
day, she explained. No orderlies with oozing compound fractures. No
flailing and howling. The worst was trying to get “Dionysus” to
take his meds, which was more like arguing with a pedantic
philosophy major than dealing with a schizophrenic. He was tedious,
but not usually dangerous.

Eventful days provided
distraction. Home was a furnished apartment with a stained rug, an
ungrateful bitch of a house cat that liked to urinate on furniture
just because she could, and the obvious absence of a significant
other to share it with. The invalids drooling on her at work were
as close as she got to hot and heavy.

Dionysus was one of two
patients brought in after some stunt at a diner that turned ugly.
He was a maladjusted paranoid – most paranoids were maladjusted,
right? – and his cohort was a gender-dysphoric turnip with a genius
IQ that referred to itself on good days as Jesus. Neither had ID,
and both refused to go by any other name. Definitive evidence was
never found, but guilt by association was enough to prove terrorist
conspiracy.

Supposedly, Dionysus was
the head of a cabal of domestic terrorists. She doubted it. It
seemed to her that he was just as bored as she was, spinning
imaginative yarns for the doctors for the sake of juvenile
entertainment. The only sign to the contrary was that anyone who
spent too much time with him had a habit of going
insane.

After signing in, the night
shift nurse started walking down the hallway to fourth ward, where
she would begin checking on the patients. Her shoes squeaked loudly
on the yellow linoleum, making her task – confirming that the
patients were asleep – slightly counter-productive. She clicked her
tongue at herself, trying to walk more carefully.

Scritch, scritch,
scritch
. The night nurse waddles through
the hallways on those god-awful rubber-soled shoes. Back and forth.
I can’t rationally blame her pacing for my insomnia, but I do it
all the same.

I feel the walls leering
in at me each night as I roll around in my lice-infested bed, my
eyelids clenched shut. They will probably look like two desiccated
grapes by morning – swollen, sticky, and purple-veined
–
as I toss
back the meds with bitter-tasting water. I just finished counting
the blocks again. (There are 551 cinder blocks, 104 and a half
floor tiles, and 25 asbestos-dusted ceiling tiles in my
room.)

I was atrophying. No sex,
terrible food, no music. There is no worse imaginable hell. Bored
is bad. Bad for me, and even worse for the staff. I get
creative
when I get
bored. Maybe those who tend the mental health machine are as much
slaves as we are. I wouldn’t know, stuck as I am on the inside of
the metal-insulated plate glass.

It’s “depressive ideation,”
the doctors say, to think about the poisonous PCBs, polluting our
bodies’ water by proxy. It is an “obsessive fixation” to mention
the soil, leeched of its vital nutrients, leaving us all hollow as
dried gourds. Granting dreams equal reality with waking was
“magical thinking.” They had a nifty name for everything, and a
real obsession with sickness. They saw it everywhere.

These things are just the
realities of our lives, if we open our eyes. The lie is grinning
talk show hosts, Prozac, the American Dream of normalcy,
homogeneity,
safety
. The natural state of the human animal in troubling times is
not happiness. Show me a man grinning in the trenches as the bombs
fall, and I will show you a lunatic.

The first couple months, I
was sure the story wouldn’t end here. I held out hope. I was, after
all, just an overeager, idealistic kid. I thought I could break the
cultural brainwash by hopping on a table with a toy gun and scream
“You’re free!” Apparently that gets you a twenty-to-life sentence
these days.

The terrorists didn’t just
fly planes into buildings. Somewhere in that twisted rubble lies
the shattered remains of this country’s sense of humor. I admit
that the Shahada flag flying behind us in our propaganda video may
have given the wrong impression.

Bottom line: ideas don’t
count for a whole lot in this world, but on their own, they’re
mostly benign. Ideals, on the other hand, get you a special jacket
with one sleeve. Ideals get you shot.

I lost that idealism as
months turned into a year. Our guerrilla street teams of lunatics –
whole lot of good they were to the two of us that got hauled in.
And Jesus was lost to us all, wandering endlessly in an inner world
of possibility. I envied his Eden, where he was a she and all was
as it should be. That wasn’t my dream, but I knew what it was to be
consumed by an ideal. It sure beat the hell out of the reality that
the doctors were trying to adapt us to. A world that deifies the
flat-line of an EKG, a world without moods or personality, a place
where stability only equals stagnation and where genocide and rape
in the name of National Interest
TM
is fine, so long as you choke down the meds and ride the neon
escalator to zombie-land.

Socrates said, “An
unexamined life isn’t worth, living,” didn’t he? Well, a life
inside a black box isn’t a life at all. Each day atrophies my soul.
And with this goddamned three foot tall Venusian goddess squatting
just behind my shoulder? – Cow teats jangling and flapping wetly,
her breath sweet like honey and milk with the copper tang of blood
– I mean, how can anyone expect to get any rest with that? It’s
just not right.

Fuck is it ever hard to get
to sleep around here.

The next day, I was in the
rec room. The drugs they pumped me full of were just starting to
wear off, and there was some awful cartoon playing on a beat up TV
that hung above us.

Watching cartoons in a
mental asylum is disturbing. Please understand, this is coming from
someone who might find talking to a Goddess while the world burns
an entertaining but not otherwise abnormal experience. Maybe
serpents writhe out from under her skirt. Maybe your nose is
overwhelmed with the smell of sandalwood and you discover that she
has a head like a rooster. Maybe you’re both Egyptian Gods. She has
a screaming orgasm, and only then you realize you both ate a
ten-strip a few aeons ago. Et cetera, et cetera. My point is, I can
handle that. That’s normal, but the routine...that’s what kills me,
a piece at a time.

It isn’t just an enemy,
though. Routine is essential to keep you
sane
in a place like this. I realize
the irony of saying that. Time is different when you’re locked up.
The building takes on a life of its own. You are just a parasite in
its metal and concrete bowels. Clocks dictate your movements. When
drugs are administered. When it is time to eat, when it is time for
walkies. Saturn rules us. This is the underworld.

The routine won. The story
very well could have ended here: an endless procession of days lost
in these hallways, living on anti-psychotics, industrial food,
coffee, and nicotine, if it wasn’t for a series of events that
brought my soul to light once again. But I’m getting ahead of
myself.

Routine said today was
Wednesday: one-on-one time with Doctor Fein at noon. I took a quick
glance at our ticking overlord. It was eleven
forty-five.

At eleven forty-seven, the
first glimmer of hope arrived in an unexpected place. A package
from FedEx. I was scrawling another page in the journal Doctor Fein
had asked me to keep for him. (Instead, he got a jaunt through my
head. Poor guy.)

As I looked up and paused
to chew on my crayon, I locked gazes with a familiar, mischievous
face. Loki. He gave me one of those “don’t blow my cover, asshole”
stares. That is how he usually looks at me, though.

I lean back and take in a
deep breath. The first full, down-to-the stomach breath I’ve taken
in months. Loki was up to something, and if anyone could spring us,
it was him. Birds flutter outside the barred windows of the
commons, the first signs I’ve seen of spring. Suddenly, time was
on
my
side.

The orderlies walk up to
me; two shambling Golems with brains rendered little better than
off-brand Jell-o by years of American Idol and a strict diet of
high fructose corn syrup. They drop a sorry-looking teddy bear. It
stares back at me from the ground with button eyes. I’m not sure
how buttons can look simultaneously cute and forlorn, but these do.
Just a little lost Mr. Teddy.

“
This came in the mail today, it was from your family,” one of
them said.

I ambled back towards my
room and try to look like I’m having a conversation with little men
in the ceiling. My fingers run a pattern across threadbare fur.
They come to something solid, deep inside its fuzzy little belly.
Oh, Loki. If these are as good as the last batch of psychedelics,
then the staff of this ward are in for an interesting
evening.

Doctor Fein sat at his
desk, rigid as a statue. The late day sun filtered into his room
through the slats of the blinds behind him, revealing all the dust,
fragments and detritus freely dancing in the air. Filth. He paused
from writing and ran his hand across his desk, leaving a trail of
dust behind it. Filth.

He sat in front of his
journal, reading it over and over again, looking for signs of
mental illness. It was a project he’d secretly started since
certain irregularities had appeared in his behavior.

Here is the life I have
chosen for myself: I arrive at the hospital every morning at seven.
I am not expected until eight, but I use the time to digest the
reports from the evening staff and have a cup of coffee in my
office. Pink, blue, yellow pages, I match checked boxes and phrases
of jargon with known faces and emotions. “Unusual or excessive
emotional reaction” dryly encapsulates bloody shrieks and
hoarse-voiced prayers for death. “Weapons prevention violation”
neatly condenses hours spent patiently honing a length of table
leg, visualizing my face slit to ribbons.

This new patient — he has
a gift for lessening the self. I have been sorting for references
to him. The reports indicate that he has quickly gained rapport
with the other patients in the ward. They shuffle into a loose
circle to hear him rant, whether his glazed eyes focus on them or
not. He draws diagrams on his body and shares self-coherent madness
with paranoid schizophrenics.

The Skeleton Tree by Iain Lawrence
The Shaman's Knife by Scott Young
The Pursuit of Pearls by Jane Thynne
Give Me All Of You by Beazer, Delka
Flower of Scotland 2 by William Meikle
Silver Sea by Wright, Cynthia
Inescapable by Niall Teasdale
Dark Hope by Monica McGurk
Black Wolf's Revenge by Tera Shanley
Betrayal: Kyle's Revenge (The Betrayal Series) by Sofia Velardi