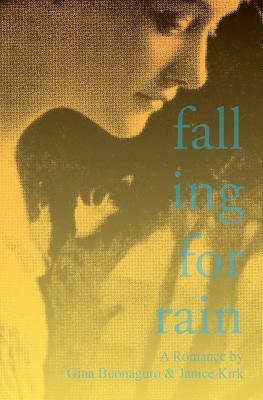 This is a work of fiction. All of the characters, organizations, and events portrayed in this novel are either products of the authors’ imaginations or are used fictitiously.

Falling for Rain
.
Copyright © 2010 by Gina
Buonaguro
and Janice Kirk.

Praise for
Falling for Rain

Coauthors Gina
Buonaguro
and Janice Kirk have done it again!
Falling for Rain
is a lively journey that evokes emotions reminiscent of their first novel,
The Sidewalk Artist
. It is a wonderful story and one you will be telling your friends to read too. Romance, action, beautifully written – what more could a reader want?

Praise for
The
Sidewalk Artist

“
The Sidewalk Artist
is an inventive
semihistorical
romance as well as a story of artistic and emotional self-discovery.”

"Nifty plotting has the main story pause for passages from Tulia’s book and the travelogue she’s reading, keeping this entertaining novel from becoming a sentimental romance.
3½ out of 4 stars.”

“The book has floated across the country on the wings of a love-dream for half a year. Now, as summer reading lists start to grow, it's a likely contender for anyone looking for a fancy, contemporary fable that's smart but not jaded, innocent but not naive.... At 209 pages, it's perfect for a long plane trip or a lazy afternoon in the shade somewhere.”
--
Toledo Blade

"Full of beautiful sensual language,
The Sidewalk Artist
will touch anyone with a romantic bone in their body."
--
The Kingston Whig Standard

"A compelling combination of romance, adventure, and serious thought, this slim novel is sure to appeal to many audiences."
--Booklist

"A wistful story about the difficult decisions people must make in both love and war,
Ciao Bella
is drenched in Italian sunshine. The authors have penned a sweet, nostalgic story about how good people struggle to do the right thing, even when there are no good choices at all."
--
Historical Novels Review

"Ciao Bella is a romantic story, even a weepy at times. But it is a credible literary feat as well, more in the vein of
Captain Corelli’s Mandolin
or
The
Time-Traveler’s Wife
…. There is never an aversion of eyes from the gritty realities of life during that terrible period. Some of the subplots, especially one involving a girl who had apparently been raped by a German soldier, are rather tragic. In the vernacular of the day, this is not chick lit. Or not just chick lit.
Lit for anyone with a heart."
--
Town Crier

"I didn’t think anything could top
The Sidewalk Artist…
but
Ciao Bella
is right up there on par with it.... I highly recommend it."
--
She Read a Book

For our parents
with special thanks to Erica
Garrington

For after all, the best thing one can do when it's raining is to let it rain.

When Emily swung the car off the main highway onto the dirt road that led to her family's farm, she felt no sense of foreboding. No inclination or premonition that this trip would turn her world upside down. Instead she felt relief.
Relief that finally she was taking the proverbial bull by the horns.
In forty-eight hours, she would be driving the opposite direction back to her real world in Toronto.

It had been ten years since she’d been home. It looked the same. The same white clapboard farmhouse, the same red barn, even the same truck parked in the driveway. When the trees were in leaf and the grass was green, the farm looked quaint, but in November in the early evening gloom among the bare branches and patches of mud, it was merely depressing.   She frowned at the sight of it, grimly pleased to find she hated it as much now as the day she'd left.

The house was in darkness, but lights were on in the barn. Rain, she decided, must be doing the evening chores. She felt a twinge of guilt for what she was about to do, but the thought of Jonathon laughing at her weakness quickly dispelled the feelings.

She stepped from the car, careful to avoid the mud and puddles that would wreak havoc on good Italian leather, and with her guilt now firmly under control made her way to the barn.

The cows faced each other in two long rows separated by an aisle, their heads secured in metal,
oval-shaped
stanchions. Rain stood in the aisle tossing hay with a pitchfork to the hungry animals as he sang along to a country song playing on a radio. Emily latched the door quietly behind her and stood for a moment in the shadows watching him work. He raised an arm and brushed back the blond wave that had fallen over his eyes. His hair was longer. Thick, blond waves that threatened to curl in the rain fell past his shoulders. But the rest she remembered: the wide strong shoulders, the slender hips encased in blue jeans, the strong well-chiselled features, the eyes as blue as the lake they had swum in as children.
Still gorgeous.
Maybe even more so.
Not that it mattered, she told herself. She’d come for a reason, and then she’d be gone again – forever.

Still, her heart pounded as she left her observation point by the door and walked to the middle of the aisle. Rain didn't see her until it was too late, and she was struck squarely in the chest by flying hay.  They both jumped back instinctively, she to try to avoid the hay, he in the shock of seeing her.

“Nice hello,” Emily said coldly, brushing the hay from her coat. Already it was going wrong. She had wanted to appear cool and business-like, but her voice was already beyond her control. She had learned over the years to hide behind a tough exterior, using anger and sarcasm to protect herself. Most of the time it worked, but she feared nothing could protect her from Rain. “Well, you shouldn't sneak up on someone like that,” he said, and Emily could see he was stunned to see her there.

“I didn't know it was country etiquette to knock on barn doors,” she said, hearing the sarcasm in her own voice. He held out his hand to her, and she looked at it before taking it. She didn't want to shake his hand, afraid that by touching him she would lose her resolve altogether and flee before she’d finished what she came to do. She hardened herself. Better to do what she had to do and get the hell out of there. Even then, though, she couldn’t help but notice the warmth and strength of the hand that gripped hers.

A horse whinnied from one of the box stalls, and Rain turned in the direction of the sound. “
It’s
okay, Celeste. I’ll be there with your hay soon.”

He always dreamed of having a horse
, she thought, an
d I’m going to take that dream away
. They were standing close together, and the scent of him, redolent of hay and trees and wind and rain, washed over her, bringing with it such vivid memories of desire that her heart raced.  Quickly, she removed her hand and stepped back.

“You should have called,” Rain said.  “If I had known you were coming, I would have aired the house out a bit – I don't go in there very often.”

“I thought you lived here,” she said with genuine confusion. “I was going to get a hotel room in town.”

“I do.
But in the old cabin.
I fixed it up after...well, some time ago.” She had forgotten his voice, rich and silky and calm.
The calm before the storm.
She could never hear expressions like that without his face flashing before her eyes. It was this calm she had hated him for all these years. For the unquestioning acceptance of his life in this Ontario backwater – and his arrogance in assuming she should accept it too.

“Would you like to see it?” he continued.  “I'm almost finished up here. I could help you take your things to the house, and then you could come over for a glass of homecoming wine.”

The word
homecoming
was enough to make Emily cringe – it sounded so sentimental, and there was to be nothing sentimental in this visit. In fact it was to be the opposite, a way of forever freeing herself from the past.  “No, thanks,” she replied. “And I can carry my own bags.” As to the offer of wine, she couldn't even give it the consideration of a response. She didn't want to stay in the house either, but she was tired, and it was a relief not to have to drive the forty kilometres into town to find a hotel room.