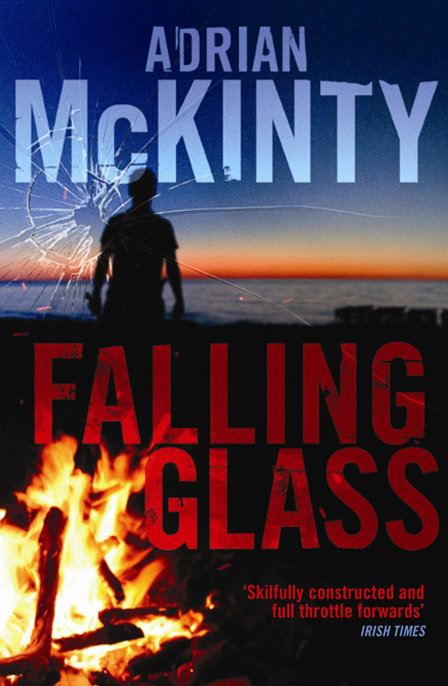 Adrian McKinty
was born and grew up in Carrickfergus, Northern Ireland. He studied philosophy at Oxford University and then moved to New York City in the early 1990s where he found work as a security guard, door-to-door salesman, construction worker, barman, book-store clerk and librarian. In 2000 he moved to Denver, Colorado where he became a high school English teacher and began writing fiction. His first full-length novel
Dead I Well May Be
was shortlisted for the Steel Dagger Award. Serpent’s Tail also publishes the second and third parts of the Dead Trilogy:
The Dead Yard
and
The Bloomsday Dead
as well as
Hidden River
. His last novel,
Fifty Grand
won the 2010 Spinetingler Award for best novel. In 2009 Adrian and his family moved to Melbourne, Australia.

Dead I Well May Be

“A darkly thrilling tale of the New York streets with all the hard-boiled charm of Chandler and the down and dirty authenticity of closing time… Evocative dialogue, an acute sense of place and a sardonic sense of humour make McKinty one to watch”
Guardian

“The story is soaked in the holy trinity of the noir thriller – betrayal, money and murder – but seen through here with a panache and political awareness that gives
Dead I Well May Be
a keen edge over its rivals”
Big Issue

“Adrian McKinty’s main skill is in cleverly managing to evoke someone rising through the ranks and wreaking bloody revenge while making it all seem like an event that could happen to any decent, hardworking Irish chap. A dark, lyrical and gripping voice that will go far”
The List

“Adrian McKinty is a big new talent – for storytelling, for dialogue and for creating believable characters…
Dead I Well May Be
is a riveting story of revenge and marks the arrival of a distinctive fresh voice”
Sunday Telegraph

“A pacy, assured and thoroughly engaging debut…this is a hard-boiled crime story written by a gifted man with poetry coursing through his veins and thrilling writing dripping from his fingertips”
Sunday Independent
“Careens boisterously from Belfast to the Bronx…McKinty is a storyteller with the kind of style and panache that blurs the line between genre and mainstream. Top-drawer”
Kirkus Reviews

“McKinty’s Michael Forsythe is a crook, a deviant, a lover, a fighter, and a thinker. His Irish-tough language of isolation and longing makes us love and trust him despite his oh-so-great and violent flaws. When you finish this book you just might wish you’d lived the life in its pages, and thought its thoughts, both horrible and sublime” Anthony Swofford, author of
Jarhead

“If Frank McCourt had gone into the leg-breaking business instead of school teaching, he might’ve written a book like
Dead I Well May Be
. Adrian McKinty’s novel is a rollicking, raw, and unsavoury delight – down and dirty but full of love for words. This is hard-boiled crime fiction with a poet’s touch” Peter Blauner, author of
The Last Good Day
and
The Intruder

“McKinty has deftly created a literate, funny and cynical antihero who takes his revenge in bloody and violent twists but at the same time, methodically listens to Tolstoy on tape while on stakeouts. He rounds out the book with a number of incredible fever-dream sequences and then springs an ending that leaves readers shaking their head in satisfied amazement”
San Francisco Chronicle

“Adrian McKinty has once again harnessed the power of poetry, violence, lust and revenge to forge a sequel to his acclaimed
Dead I Well May Be
”
The Irish Post

“McKinty’s literate, expertly crafted third crime novel confirms his place as one of his generation’s leading talents…McKinty possesses a talent for pace and plot structure that belies his years. Dennis Lehane fans will definitely be pleased”
Publishers Weekly

“
The Dead Yard
is a much-anticipated sequel to
Dead I Well May Be
and every bit as good. McKinty crackles with raw talent. His dialogue is superb, his characters rich and his plotting tight and seamless. He also writes with a wonderful (and wonderfully humorous) flair for language, raising his work above most crime-genre offerings and bumping right up against literature”
San Francisco Chronicle

“Expat Irishman Adrian McKinty has just put out his fourth terrific book…and he keeps getting better. He melds the snap and crackle of the old Mickey Spillane tales with the literary skills of Raymond Chandler and sets it all down in his own artful way. This is a writer going places. Hop aboard”
Rocky Mountain News

“Those who know McKinty will automatically tighten their seatbelts. To newcomers I say: buckle up and get set for a bumpy ride through a very harsh landscape indeed. His antihero Michael Forsythe is as wary, cunning and ruthless as a sewer rat…His journey in some ways parallels that of James Joyce’s Leopold Bloom on one day in Dublin, but – trust me – it’s a lot more violent and a great deal more exciting” Matthew Lewin,
Guardian

“Thoroughly enjoyable…[McKinty] maintains the bloody action all the way from Lima to Larne with panache and economy. His hero, the ‘un-f***ing-killable’ Michael Forsythe, is a wonderful creation” Hugh Bonar,
Irish Mail on Sunday

“McKinty is a cross between Mickey Spillane and Damon Runyon – the toughest, the best. Beware of McKinty” Frank McCourt

“A roller-coaster of highs and lows, light humour and dark deeds… Once you step into
Hidden River
, the powerful undercurrent of McKinty’s talent will swiftly drag you away. Let’s hope this author does not slow down anytime soon”
Irish Examiner

“[A] terrific read…this is a strong, non-stop story, with attractive characters and fine writing”
Morning Star

“This is genuinely hard to put down”
Buzz

“A dark, lyrical and gripping voice that will go far”
The List

This eBook edition published in 2011

Copyright © 2011 Adrian Mckinty
The moral right of the author has been asserted.

The characters and events in this book are fictitious. Any similarity to real
persons, dead or alive, is coincidental and not intended by the author.

This eBook is copyright material and must not be copied, reproduced,
transferred, distributed, leased, licensed or publicly performed or used in
any way except as specifically permitted in writing by the publishers, as
allowed under the terms and conditions under which it was purchased or as
strictly permitted by applicable copyright law. Any unauthorised
distribution or use of this text may be a direct infringement of the author’s
and publisher’s rights and those responsible may be liable in law accordingly.

It’s no go my honey love, it’s no go my poppet;
Work your hands from day to day, the winds will blow the profit.
The glass is falling hour by hour, the glass will fall forever,
But if you break the bloody glass you won’t hold up the weather.

“M
Y POINT, FRIEND, IS THAT THIS IS NOT AN AFFECTIONATE
homage. This is not an interior critique. This is not Jay-Z using, what I advisedly call, the N-word. This is a collection of clichés that actually undermines what it is supposed to be celebrating. This whole ethos is a paradigm in need of shifting. And the fact that it is generated by people, no offence, with only a tangential connection to the ur-source of that culture makes it all the more embarrassing.”

The barman nodded. “So do you want another pint then? One without a shamrock on the head?”

Killian sighed. “It’s not even about the shamrock is it? It’s the entire ‘vast moth-eaten musical brocade’. The whole shebang. This entire scene, brother, is, at best, a pastiche. But while we’re on the subject of the shamrock, what’s with the four leaves? Nothing could be simpler to remember. The Celts are polytheistic, they have many gods, Saint Patrick wants them to worship one god so he employs the shamrock to represent the Trinity: God the Father, the Son and the Holy Ghost. The Trinity. Three leaves. A four-leaf shamrock isn’t a shamrock, it’s a four-leaf clover. Do you see? I mean, at the bare minimum we should both be able to agree on that?”

The bar man – bar
boy
really – nodded more firmly this time. “I’ll get
you another pint, without the shamrock. I didn’t know you was from the old country itself so to speak.”

“Although,” the kid added, with a twinkle in his eye which Killian might have caught if he had been paying attention, “You’ve got to give him credit for the snakes.”

“You’re Irish?” a voice asked from behind him, in the blind spot – a dangerous place for anyone to be. Killian flinched and turned, his hand reaching inside his pocket for a ghost piece.

A big guy in a Rangers shirt. NY Rangers that is. Not Glasgow. Different thing all together.

“Your accent’s not Irish though is it?” the man said sceptically. His voice had a hint of crazy and his eyebrows were madder than Freddie Jones’s in David Lynch’s
Dune
.

The man nodded slowly. “Oh, I see, so not Ireland, Ireland. Have you ever been to Dublin? That’s a real Irish city.”

Killian’s fresh pint of the black stuff appeared on the bar in front of him a mere forty-five seconds after he’d been promised it – not a great sign. The barman however must have had concentration or even psychiatric problems because there on the top was another four-leaf clover masquerading as a shamrock.

Killian knew it was time to hit the exit. But before he did: “Dublin’s a nice place but you have to remember that it was a Norse settlement for three centuries before it became an English town for seven centuries more. It’s been an
Irish
city for ninety years. Are you familiar with the Aboriginal concept of The Dreaming?”

Disharmony by Leah Giarratano
Something Sparked-nook by Mari Carr
A Fever in the Heart: And Other True Cases by Ann Rule
Timepiece: An Hourglass Novel by Myra Mcentire
Sweet Temptation by Angel Steel
The First Four Years by Wilder, Laura Ingalls
Goodnight Tweetheart by Teresa Medeiros
Not the Man She Thought by Paige Tyler
Into the Garden by V. C. Andrews
More Than a Man by Emily Ryan-Davis