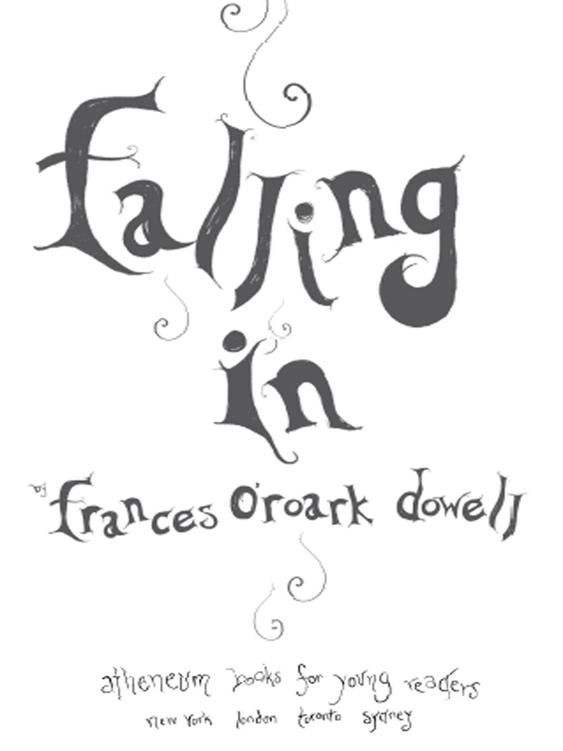 The Secret Language of Girls

The Kind of Friends We Used to Be

This book is a work of fiction. Any references to historical events,

real people, or real locales are used fictitiously. Other names,

characters, places, and incidents are products of the author’s

imagination, and any resemblance to actual events or locales or

and A. Brown. 1913.
An illustrated flora of the northern United States,

All rights reserved, including the right of reproduction

in whole or in part in any form.

For information about special discounts for bulk purchases,

The Simon & Schuster Speakers Bureau can bring authors to your

live event. For more information or to book an event, contact the

The text for this book is set in Adobe Caslon.

have feared for years, finally come to devour them.

For my brother De, who helped me make up the story
about the carnival under the family room closet,
and for my brother Doug, who believed us

The author would like to acknowledge the following people for their help with this book: Caitlyn Dlouhy, Genius, and Kiley Frank, Assistant Genius, for being, well, geniuses; Lizzy and Barbara Dee, for once again helping me find a title; Sonia Chaghatzbanian for the fabulous jacket and interior design; Alison Velea, copy editor extraordinaire; Elizabeth Blake-Linn, who made the most marvelous cover sparklies sparkle; and Trena Griffith-Hawkins’ 2008–2009 Durham Academy Huskies,
Falling In
’s first audience. Thanks for listening, guys!

The author would also like to acknowledge the following members of her tribe, who are all kind, funny, and incredibly good-looking, and who manage against all odds to keep her sane enough to write books: Amy Graham, Kathryn and Tom Harris, Danielle Paul, the O’Roarks, the Dowells, the most fabulous Jonikas gals, and as always, and with big, big love, Clifton, Jack, and Will Dowell (and, of course, Travis).

There is a crack in everything, that’s how the light gets in.

On the morning this story begins, Isabelle Bean was convinced she was teetering on the edge of the universe. Which is why, instead of copying spelling words off the board as instructed by Mrs. Sharpe, she had her ear pressed to her desk. All morning a strange sensation had buzzed along her fingers every time she’d put her pencil to a piece of paper, and by the time spelling period had come around, she had determined that the buzzing was coming up from the floor, through the desk’s legs, and up to the desktop.

She closed her eyes in order to concentrate more fully on the buzzing. It was like the buzz that a house makes when it thinks no one’s home—the
refrigerator humming a little tune, the computer purring in the corner, cable lines wheezing softly as they snake through the walls and underneath the floorboards.

Being a careful listener from way back, Isabelle knew this wasn’t the school buzzing. Elliot P. Hangdale Middle School never buzzed. In the mornings it rumbled and moaned as the children settled themselves into their desks and teachers cleared their throats, and in the quiet of the afternoon, students, janitors, and administrative assistants dozing off in every corner, it emitted a low-pitched whine, as though begging someone to bring it a glass of water.

So if it wasn’t the school that was causing Isabelle’s ear to tingle, then what? Isabelle felt if she could just hold her head still enough, for just a few seconds more, the answer would rise up from the floor and deposit itself into her brain, and maybe, finally, the floor would open up beneath her and she would fall into a far more interesting place than Mrs. Thalia Sharpe’s sixth-grade classroom.

“Isabelle Bean, I’ve asked you a question! What is your answer, please?”

Isabelle’s head jerked up and snapped back so violently she was surprised it didn’t fly straight off her neck. Mrs. Sharpe’s squeal of a voice always had this effect on her various limbs and appendages, as though Isabelle were a puppet and Mrs. Sharpe’s high-pitched voice her master. Fortunately for Isabelle, Mrs. Sharpe’s general inclination was to ignore her, but even Mrs. Sharpe couldn’t ignore what appeared to be blatant napping.

“And your answer is?” Mrs. Sharpe drummed her fingers against her desk to demonstrate her impatience.

“One hundred ninety-seven?” Isabelle guessed, remembering a moment too late that it was spelling period, not math.

Her classmates twittered and giggled. One boy in particular, Ferguson Morse, was especially tickled by Isabelle’s answer, and when Ferguson was tickled he began to hiccup violently. Ferguson’s hiccups caused Monroe Lark to laugh so hard he rolled out
of his chair and into the middle of the aisle. Within seconds, the class was in a complete uproar.

“Isabelle Bean!” Mrs. Sharpe bellowed from the front of the classroom, pointing a finger violently toward the door. “To the principal’s office!”

Isabelle sighed a feather-brush sort of a sigh. Why always the same old thing? Couldn’t Mrs. Sharpe come up with something more original? Why not shoot Isabelle out of a cannon, send her flying over the top of the playground’s monkey bars? Why not enlist her in the Foreign Legion and deport her to deepest, darkest France?

That was the problem with adults, Isabelle thought sadly as she stood and brushed a few eraser crumbs from her lap. They lacked originality. Why, just this morning over breakfast her mother had made the most hopelessly boring suggestion that she and Isabelle should go shopping this weekend. “Janice Tribble told me there was a big sale at the mall,” her mother had said, reaching across the table for the jam jar. “Twenty percent off everything at the Junior Wear Jamboree.”

“You want me to go to the mall?” Isabelle could hardly believe it. The mall? Home of dreary raincoats and unnecessary sportswear? Capital of cinnamon buns that smelled wonderful, but tasted like sponges left for months under the sink? The very thought made Isabelle want to lie down and go to sleep for a hundred years.

“People do it all the time, Isabelle,” her mother said in a weary voice, a V of disappointment or worry or sadness (or some heavyhearted combination of all three) appearing between her eyes. “It’s quite a convenient way to purchase clothing.”

“I’ve decided to make all my clothes from now on,” Isabelle reported. The idea had burst into her head that very second, the way ideas did all the time—ideas like little constellations of sparks and light and bright colors—and she immediately liked it. So what if she didn’t exactly know how to sew? So what if she had the dexterity of a webbed-toed walrus? Why should that stop her?

“Izzy, you can’t even—,” her mother started, then stopped. She studied the jam jar (boysenberry,
Isabelle’s favorite), then carefully dolloped a blob onto her toast and spread it with the back of her spoon before cutting the toast into four little triangles. As she lifted a triangle to her mouth and began nibbling on a corner, a splotch of jam dropped on her chin, and Isabelle thought about reaching across the table to dab at it with her napkin, but decided she liked how the blob of jam looked. Like a beauty mark, she thought.

“I just remembered that I’m allergic to the mall,” Isabelle said after a few moments of her mother’s chewing. “But if you really want to go shopping, maybe we could go to a thrift store. That could be fun, don’t you think?”

Mrs. Bean grimaced. “Hand-me-down clothes. I wore them my whole childhood. They smell like attics and old people snoring.”

“The smell never goes away, no matter how many washings,” Mrs. Bean said, tucking the last
bit of toast in her mouth. Picking up her plate, she stood to go into the kitchen, then paused and looked back at Isabelle, her face brightening. “How about catalogs? We could order you some new things from catalogs.”

Oh, what was the use? Isabelle nodded at her mother. “Sure, maybe we could do that.”

Grown-ups,
she thought as she grabbed her backpack to go meet the bus. The mall! Catalogs! Why couldn’t they ever do something the slightest bit unusual? Unexpected?

Laziness, maybe. Or lack of imagination.

That was it: Lack of imagination.

The path to Vice Principal Closky’s office was a familiar route. Over the years Isabelle had demonstrated an impressive talent for irritating teachers to the extremes of their patience. It wasn’t something she set out to do. In fact, she never quite understood what she did to raise her teachers’ blood pressure to such dangerous levels. Neither did her
teachers, and this irritated them even more. Teacher’s college had equipped them to handle nose pickers, fire starters, back talkers, hitters, biters, and whiners. But quiet girls who weren’t shy, girls who talked in riddles but were never actually rude, girls who simply refused to comb those confounded bangs out of their eyes, well, girls like that were beyond them.

Apache Nights by Sheri WhiteFeather
Kaleb (Samuel's Pride Series) by Barton, Kathi S.
Fair Play by Deirdre Martin
Rising Star by Cindy Jefferies
Redeeming the Deception of Grace by Kristin Vayden
I'd Like to Apologize to Every Teacher I Ever Had by Tony Danza
Sunset and Sawdust by Joe R. Lansdale
The Catalyst of Corruption (The Final Formula Series, Book 4) by Becca Andre
Alien-Under-Cover by Maree Dry
Fear by Sierra Jaid